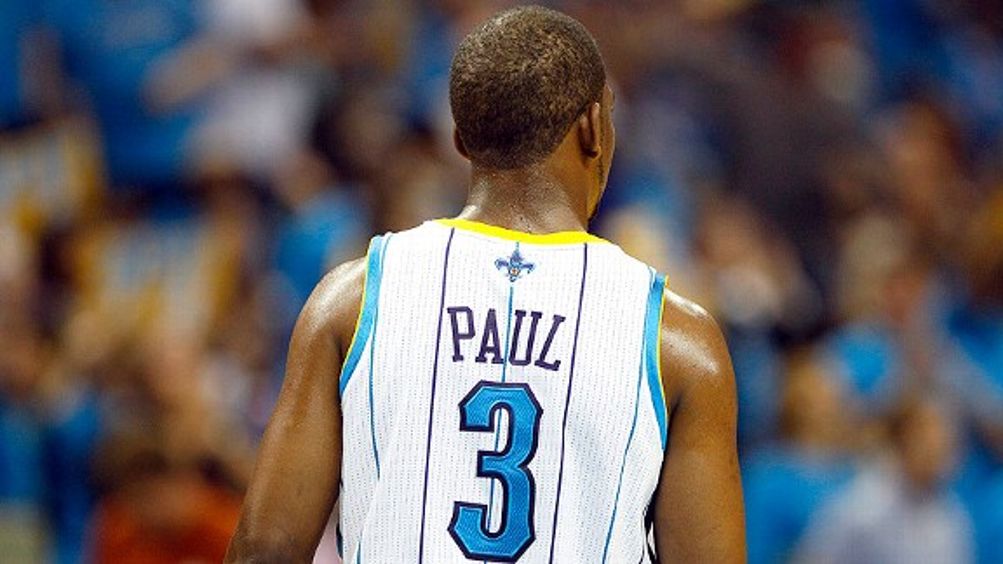 The first six days of the Sports Guy’s 12 Days of NBA Christmas.

Day 1: The Road to Groundhog Day (and more dumb contracts than ever) ♦ Day 2: The Donut Dilemma (the bubble in the center market) ♦ Day 3: Is Arron Afflalo really worth $50 million? ♦ Day 4: Where the Hell is Chris Paul going? ♦ Day 5: Inside Grantland Featuring Blake Griffin, Part II ♦ Day 6: The Day the NBA Lost Its Way

“The crux here, the issue driving this whole ‘Tebow Thing,’ is the matter of faith. It’s the ongoing choice between embracing a warm feeling that makes no sense or a cold pragmatism that’s probably true. And with Tebow, that illogical warm feeling keeps working out. It pays off. The upside to secular thinking is that — in theory — your skepticism will prove correct. Your rightness might be emotionally unsatisfying, but it confirms a stable understanding of the universe. Sports fans who love statistics fall into this camp. People who reject cognitive dissonance build this camp and find the firewood. But Tebow wrecks all that, because he makes blind faith a viable option. His faith in God, his followers’ faith in him — it all defies modernity. This is why people care so much. He is making people wonder if they should try to believe things they don’t actually believe.”

“Similarly, there are some rule violations that exist only in organized basketball. Try finding a three-second call in a game that doesn’t include referees, scorekeepers, and uniforms. The over-and-back rule is rarely enforced during pickup hoops. Claiming any kind of offensive foul on a playground could spark an argument that culminates with an unhappy gentleman skulking off to get a firearm from the glove compartment of his Pontiac. And you could play for decades without ever seeing any normal person attempt the so-called ‘rip-through’ move, the most dipshit trick in basketball.

“On the rip-through, an offensive player intentionally swings his arms into an aggressive defender and heaves the ball toward the basket in hopes of drawing a foul. Veterans such as Paul Pierce have mastered pump fakes that coax defenders to leave their feet, but the rip-through does not fool opponents with sly misdirection or guile. Here, offensive players are rewarded for hoisting up a sudden, wild shot that typically flies as errantly as a wounded owl. It’s a play that would be considered demented on any blacktop on the planet.

“Fortunately, despite the stench of rotting flesh that now seeps from the NBA politburo offices, there comes a bit of good news. Earlier this week, Stu Jackson, the league’s executive vice president of basketball operations, confirmed that the rip-through move would no longer be designated as a shooting foul — providing contact occurred before the start of the shooting motion. It’s unclear exactly how this will be enforced or interpreted, but the change was needed.”

“It started as a joke, this Squinky business, just a lighthearted way to describe the torment of OSU fans. Just your average tentacled hell-beast serving its time in a metaphor. But you have to understand, I had seen Oklahoma State lose to Oklahoma in every conceivable and numerous inconceivable ways over the years. I had seen leads eroded, leads obliterated, leads untended and left for dead. I had seen entire teams starve to death on the field. Early in the fourth quarter, with OSU leading 44-3, my head started spinning, and if a giant crack had opened at the 50-yard line and a tentacle had come rolling out Jules Verne-style, I’m not sure I would have blinked. I would have watched it flatten the goal posts and rip out the girders under the stands, and I would have jotted down the headline ‘OSU Football Plays Game.'”

“But this is all gravy to the doomsayers and failure fetishists of a Fall TV Cancellation League, a place where termination is its own reward. As you can see from the results, this year’s contest wasn’t close — and, in fact, most of the scoring was sorted well before the Nielsen company received its shipment of carefully curated moleskins. But even if the action in our inaugural league ended up less dramatic than an average episode of A Gifted Man, we still felt duty bound to share the outcome. The League may be back in the spring with tweaked scoring opportunities and, no doubt, a Nielsen slam book of animosity towards a certain television-centric writer who demolished the competition and is currently typing in the third-person. Midseason is a whole different ballgame.

“To sum up, it’s worth noting that while the future of network TV may seem punishingly Grimm, for dedicated fantasy players, those with visions of Work It cross-dressing in their heads, it’s never looked brighter.”

“I went to visit Robert Griffin at what turned out to be the low point of his season, at a time when no one — not even Griffin himself — seemed optimistic about his chances of winning the Heisman Trophy. Two days earlier, Baylor had lost by 35 points at Oklahoma State, and that loss came on the heels of a 27-point loss to Texas A&M the week before. Griffin had worn the Halloween costume to lighten the mood. It was clear that the Bears possessed one of the weakest defenses in the country, and that if they were to salvage something from this season, they would need Griffin to carry them even more than he had up to that point. This didn’t seem humanly possible, and I presumed Baylor (which had never won more than three Big 12 games in a season until last year) would fade, and perhaps slip into a third-tier bowl game, and Griffin would finish eighth in the Heisman voting, and life would go on as it always has in Waco.

“But it just so happened that after I left town, Griffin did get even better. Against Missouri: 406 yards passing, three touchdowns. Against Kansas: 433 total yards, four touchdowns. Against Oklahoma: 479 passing yards, four touchdowns, and perhaps the most accidental signature moment of any Heisman candidate in history: a pass over the middle that was deflected by a defender and landed, in stride, in the arms of receiver Kendall Wright, who scored the game-tying touchdown. Griffin got knocked out for most of the second half against Texas Tech with a head injury, and then came back for the season finale, a blowout win over Texas in which he threw for a pair of touchdowns and ran for two more. The Bears won five straight under fourth-year coach Art Briles and finished 9-3, and it appears increasingly likely that on Saturday, Griffin will become the first Baylor football player to win the Heisman Trophy.”

“It’s hard to read Branch’s work and not come away feeling sickened by the concept of fighting in hockey and the toll it can take on a human. On the other hand, elsewhere on the New York Times website is a piece called ‘A New Worry for Soccer Parents: Heading the Ball’ about the brain damage found in since-childhood soccer players, which is ‘similar to [that] seen in traumatic brain injury.’ Do the people who want to end fighting in hockey want children to stop heading soccer balls, too?

“Really, the scarier story revealed in Branch’s Boogaard article isn’t the stuff about instigators and punches, it’s the parts about institutions and pills. Boogaard ultimately died of an overdose of Oxycontin and alcohol; his appetite for the painkillers — often eight at a time — was well sated, Branch writes, by NHL doctors, many of whom either didn’t know or didn’t want to know what other NHL doctors had already prescribed. Branch alleges that Boogaard was given a heads-up when NHL drug tests were coming. When he died, he was on leave from league-sponsored rehab. The New York Rangers have put their players under a gag order on the topic. ‘We’ve been told not to talk about it,’ Sean Avery said. ‘I certainly have opinions on it, but we’ve been told not to comment.'”

“Baseball is not basketball.

“When a gingham-shirted LeBron James told the world he was leaving Cleveland to go play for the Miami Heat, two franchises — two entire cities — were irrevocably changed. The Cavaliers went from fringe title contenders to odds-on favorites for the no. 1 overall pick in the next draft. Cleveland reacted with seething anger, burning LeBron jerseys by the thousands and reaffirming their status as the most tortured sports city in America. In Miami, we got LeBron and his new teammates Wade and Bosh, standing on a catwalk wearing Heat home whites, smiling for the cameras, tacitly declaring their supremacy. They didn’t win in year one, of course. But future rings seem inevitable.

“Albert Pujols is not LeBron James. The Angels are not odds-on World Series favorites. And the Cardinals should be damn good in 2012.”

“Alabama or Oklahoma State? The debate raged all day Sunday, and after the BCS was released with Alabama ranked second, a whole new set of questions arose. Were quality wins more important than quality losses? Should a rematch be played? Should a team that couldn’t even win its own conference play for the national championship?

“In the midst of this dialogue, a separate debate raged over whether the BCS should be abolished in favor of a playoff. Most people support a playoff with some form of the BCS formula used to determine eligibility and seeding. Others want the BCS to remain intact.

“But all these debates miss the fundamental problem — the current BCS formula is a heavily flawed disaster. This formula came very close to destroying the façade of the BCS this year and represents a ticking time bomb waiting to explode on college football.”

“This year’s Best Picture contest is starting to feel afflicted by a similar sense of what I would call belligerent nostalgia. The two movies to win high-profile prizes so far, The Artist and Hugo, are both being hailed as odes to the early days of cinema. But really, they’re not. The Artist tells you everything it knows about the painful transition from silents to talkies in its first 10 minutes: It’s an undeniably charming but extremely slight comedy-drama that mimics the most basic elements of silents (They were black-and-white! The screen wasn’t wide!), but seems more engaged by their poignant quaintness than by the visual language, wit, beauty, complexity, or psychological richness of the movies it purports to honor. And as enchanting as it can be to enter the glittering, hermetically sealed but vividly three-dimensional toy chest/train station universe that Martin Scorsese has created in Hugo, there is something slightly self-adoring about the story it tells. Hugo is not a valentine to the dawn of movies — it’s a valentine to people who send those valentines, a halo placed lovingly atop the heads of cinephiles and film preservationists. (And, not incidentally, film critics and Oscar voters.)”