Chris Paul and the Lakers: What Could Have Been 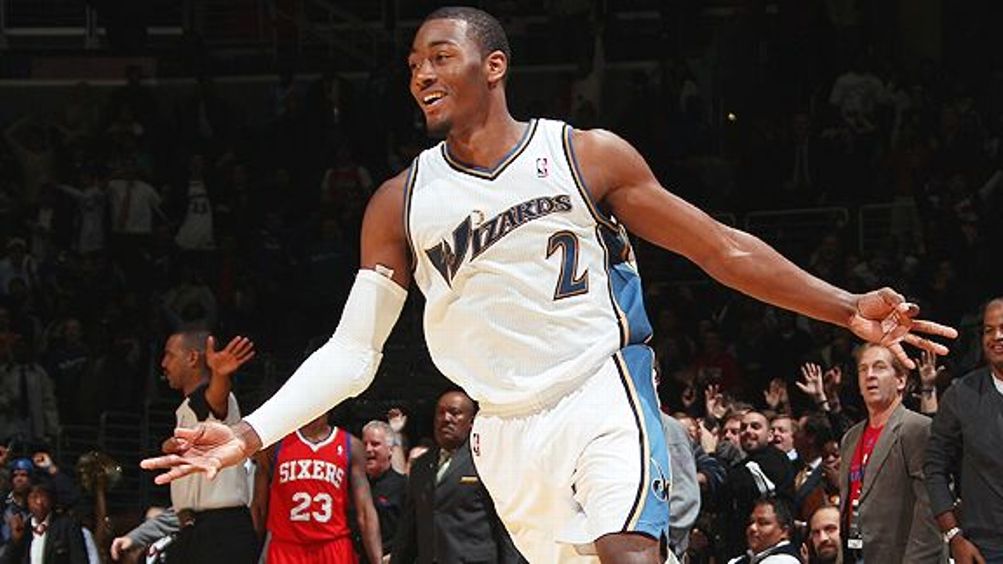 John Wall had a very good rookie season in 2010-11 and came in second to Blake Griffin for Rookie of the Year. Wall averaged 16.4 points and 8.3 assists per game, but those numbers don’t tell the whole story. Advanced statistics show that Wall didn’t have the most efficient season. His 49.4 true shooting percentage was 13th worst among all NBA point guards who played at least 15 minutes per game. Looking at Synergy Sports’ Points Per Possession numbers, Wall doesn’t fare much better. In the half court, Wall posted a PPP of 0.730, putting him in the bottom 15 percent of all NBA players. In fact, among the 395 NBA players with at least 100 half-court possessions, Wall’s PPP ranks him 373. Wall needs to become more efficient if he wants to become one of 2012’s breakout stars.

Why does someone with John Wall’s skills — a great first step, strong ballhandling, and the ability to finish at the rim — struggle so mightily in the half court?

Bad habits. Wall settles for jump shots way too often. Whether they are open or contested, Wall’s taking a jump shot instead of driving to the rim is a win for the defense. According to Synergy, 60 percent of Wall’s shots were jump shots and just 29.9 percent of his shots came around the rim in non-post-up situations. Wall shot just 32.4 percent on his jumpers and 49.1 percent from close range. Based on these results, it seems obvious that Wall should be taking the ball to the cup more often.

Wall tends to settle for jumpers in two types of situations. There are times when he settles with space, choosing to shoot from outside instead of driving, and then there are times when he tries to get to the rim, can’t beat his defender, and then rises for a contested jump shot. First, let’s look at “space settles,” in which Wall had space to attack the basket but instead chose to settle for a jump shot: 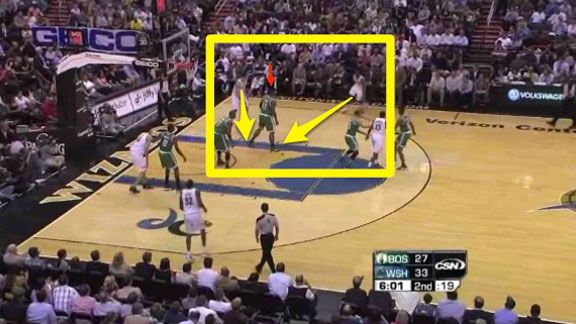 On this play, Jordan Crawford catches the inbounds pass and is immediately double teamed. Crawford quickly passes back to Wall, which means that somewhere on the floor one defender has to cover two offensive players. If John Wall attacks the rim in this situation, only good things can happen for the Wizards. Either Glen Davis will step up and defend Wall, allowing Wall to dish to JaVale McGee, or Davis will stay back and allow Wall a lane to the rim. Instead of attacking, however, Wall lets Davis and the Celtics off the hook by attempting a long 2 off the dribble. 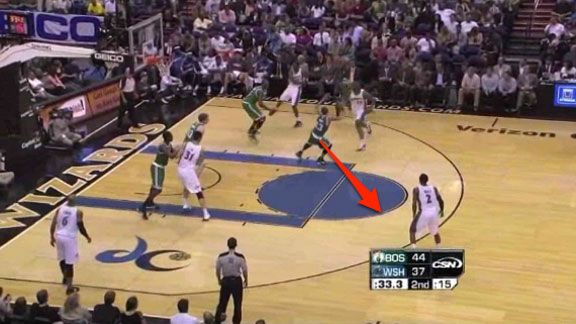 From the same game, we see another situation in which Crawford makes a good pass to Wall. Handling the ball after a pick and roll, Crawford sees Delonte West, Wall’s defender, sink into the middle of the floor and skips a pass to Wall. This forces West to close out hard on Wall, even though Wall isn’t a good shooter. 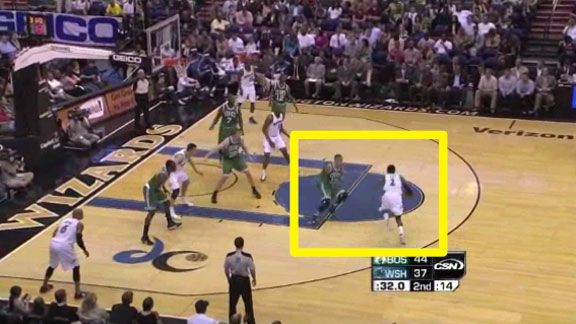 Wall throws a little head-fake to the left, and then drives right. That quick move puts West on ice skates and gives Wall the advantage. 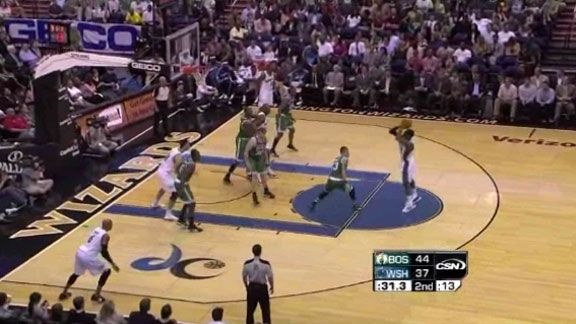 However, Wall gives up his advantage by settling for a jump shot at the top of the key. Again, if Wall drove all the way to the rim, the play would likely end with a layup, a foul call against Wall, or a dump-off if a Boston defender leaves his man to help. By ignoring his open lane and instead shooting from long range, Wall lets the defense off the hook. Here are those two plays in real time:

In these plays, the problem is not that Wall doesn’t have the athletic ability or vision to attack the rim and finish with a layup or assist. In fact, those are two of his best skills. It almost seems like Wall is trying to prove that he has a jump shot by taking these open ones instead of attacking the lane.

Now let’s examine Wall’s “contested settles,” in which he attempts jump shots after realizing he can’t get to the rim:

On some possessions, Wall seems to decide that it is his duty to score. Usually when this happens, he puts his head down and tries to get to the rim. That’s good. But this is the NBA, and sometimes the defense will be able to cut off Wall’s drives. When that happened last season, Wall too often settled for contested jump shots. Instead of shooting in these situations, he should have pulled the ball back with his dribble or kicked it out with a pass.

Continuing with the settling theme, this is what also hurts Wall in the pick and roll. Wall takes a jump shot 51.3 percent of the time he comes off of ball screens. For someone with Wall’s speed and finishing ability, that is way too much:

We pick up this play with Trevor Booker setting a screen for Wall. Wall uses it and dribbles toward the middle of the court, forcing the defense to react. 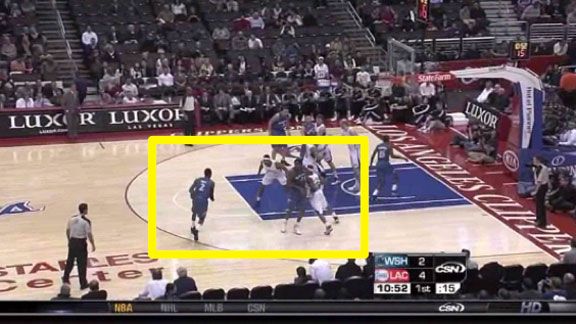 Wall’s defender goes under the screen, as Booker’s man is hesitant to leave the screener as he rolls to the rim. The result is a lot of space for John Wall at the top of the key. If you are Wall, you want to attack this space and get a running start on the defense as you penetrate to the basket. That’s the best play for Wall to make in this specific situation. 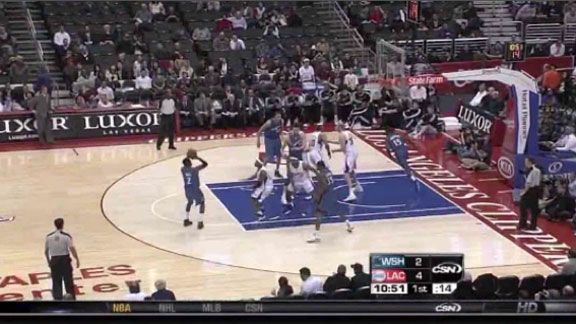 Instead, Wall settles for a jumper. Look at all the space in front of him. Again, he’s letting the defense off the hook. Here are a few more clips:

How do we know Wall settles too much? If we look at the one area in which Wall had success on offense, we will see that Wall needs to penetrate more. According to Synergy, Wall was at his best in isolation situations, posting a PPP of 0.836, a number that’s in the top 40 percent of all NBA players. It’s no wonder Wall has success when he attacks the rim. He’s got a fantastic first step, quick change-of-direction moves, the athleticism to get to the hoop, and the strength to finish through contact:

Wall is an adept ball handler, and when he is determined to drive to the basket there is little defenses can do to stop him one-on-one. This forces them to send help defenders at Wall, and when that happens he sees the floor well enough to identify where the help is coming from and find his open teammates. Wall’s PPP when he passes out of isolation plays is 1.21, good enough to put him in the top 25 percent of all NBA players. When he penetrates and forces defenses to react, Wall’s teammates are most definitely the benefactors:

When Wall drives, he stays patient and in control, waiting until the last possible second before he decides to shoot or pass. His elite athletic ability and vision allow him to wait that long, and if the defense helps, the result is an assist.

If Wall wants to make the leap this season, he needs to start attacking the rim more often. The problems with Wall’s shots are correctable — he tends to take his eyes off the rim before releasing the ball, he doesn’t get quite enough lift on his jumpers, and his elbows tend to flare out too much. But even if he corrects his form, Wall won’t become such a good shooter that it will make sense for him to settle for jumpers instead of penetrating.

The second area in which Wall needs to improve this season is his pick-and-roll play. Specifically, he has to take better care of the basketball. When Wall looks for his teammates, he forces too many passes, which results in turnovers. In pick-and-roll situations, Wall’s PPP of 0.666 was in the bottom quarter of the NBA. For the most part, that number was so low owing to the fact that Wall turns it over 19 percent of the time on ball screens.

Before his rookie season with the Wizards, Wall rarely ran the pick and roll, so his tendency to force passes to the roll man is definitely a sign of inexperience. When Wall keeps his options open and his head up, he is much more effective:

Finding cutters and teammates spotting up out of the pick and roll puts defenders on their heels. They can’t commit to guarding just the screener and ball handler — they have to worry about everyone. This spreads the defense and creates openings. Can Wall improve in this area? Definitely. Wall didn’t run the pick and roll much at Kentucky, where he came off of ball screens on only 9.7 percent of his possessions. With the Wizards that number more than tripled, to 30.1 percent, so it should be no surprise that Wall experienced some growing pains in his rookie season. The key for Wall is to learn from last year’s mistakes.

If he can limit his turnovers in the half court, specifically in pick-and-roll situations, and he commits to attacking the rim more often, John Wall should become one of this NBA season’s breakout stars.

Previously by Sebastian Pruiti:
The Pros and Cons of Kentucky’s Anthony Davis
Thomas Robinson Grows Into His Role at Kansas
The Problems with Austin Rivers