The Trendiest Team in the NBA 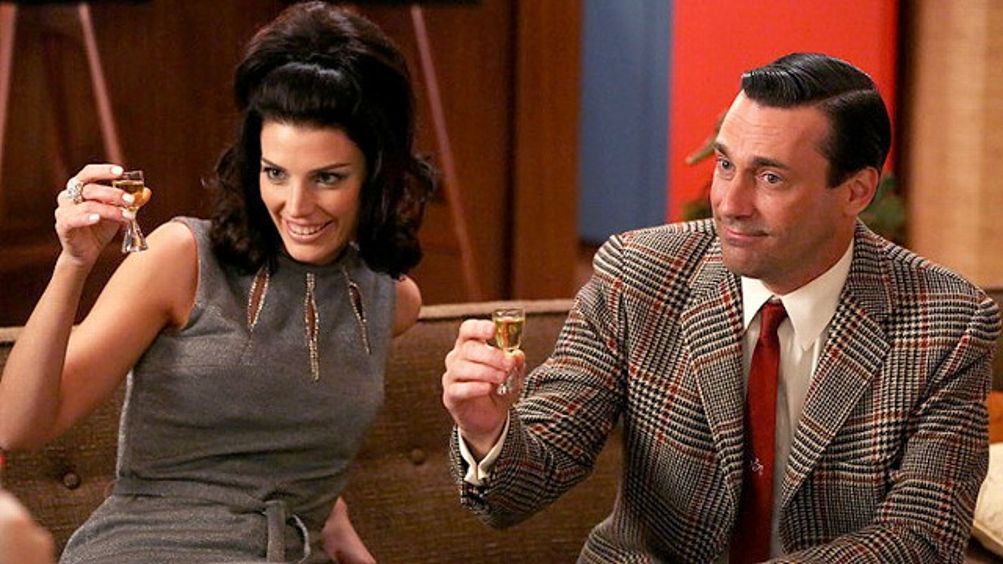 Matt Weiner would like you to know that Mad Men returns for its sixth season this Sunday at 9 p.m. EDT on AMC. The premiere is two hours in length and will feature well-paid actors performing roles in front of the camera. Actor Jon Hamm will be among them, as will actor Elisabeth Moss. If you’d like to infer that these actors will be once again playing the parts of “Don Draper” and “Peggy Olson,” well, Matt Weiner is mostly OK with that, although he’d rather not get into it. Anything more would be pure speculation. Will cocktails be consumed? Will events occur in an office or an elevator? Might an advertising executive stare obliquely out a window while smoking a cigarette? I’m very sorry, but Matt Weiner simply couldn’t comment.

No showrunner in television history is as obsessed with secrecy as Mad Men‘s Weiner. He protects even the smallest details of his Emmy-winning show like Dick Whitman guarding the skeletons of his past. Want to know the year in which the upcoming season is set or if the Drapers ever managed to steam clean the muddy footprints of industry out of their pristine white carpet? Good luck. It’d be easier to pry a bottle of singing Stolichnaya from Roger Sterling’s LSD-laced fingers. Weiner is notorious for wanting to micromanage each aspect of the Mad Men experience, from writing (or, more infamously, demanding credit for writing) every script to controlling how and when we mortals get to experience his genius. You can see it in the borderline satirical “next week on … ” teasers that grudgingly include actual scenes from the subsequent episode but manage to convey as much information as a Buddhist prayer gong.1 And I see it every spring when the extravagant package containing the season premiere — the only episode sent to critics in advance — arrives packed with an intense letter from Weiner himself detailing all the facts he’d rather I not mention. These range from the reasonable (the status of key relationships) to the insane (decorative and architectural changes to the office). I have a feeling that, if he could, Weiner would join me on my couch every Sunday night to stop me from tweeting jokes about Ginsberg’s clothes.

But I come not to bury Weiner’s megalomania. Rather, I celebrate it. Despite his evident concern, the bald brahmin has nothing to fear. I will reveal no untoward details of Mad Men‘s sixth season, not the headlines from which it rips nor which characters do the ripping — though I must admit, Joan accompanying Huey Newton to a Jefferson Airplane concert seemed a bit on the nose.2 I’ve seen the premiere and it’s ______,3 but I would never ruin it for you because I couldn’t bear the same thing being done to me. It’s not that I’m a stickler for surprises, it’s that the artful way in which Weiner chooses to unveil them is invariably worth the wait. I’ve seen less anticipation this year than last, no doubt partly because the gap between Mad Men‘s fantastic fourth season and its phenomenal fifth was long enough for Betty Francis to put a serious dent in New York State’s emergency Bugle reserves, and partly because, to some, the idea of watching Don Draper continue to lose his mojo is about as appealing as YouTubing “Willie Mays Mets.” Even so, I wouldn’t have traded even a second of those long, lonely 17 months for advance knowledge of Megan’s song-and-dance act. Some things need to zoobe seen to zoobe zoobelieved.

The bigger question is: Why all the confidentiality in the first place? Mad Men exists a universe away from the crackling nerd bait that fuels both the interest in and the ratings of more spoilerphobic shows. Which is to say: It exists in our universe. There are no apocalyptic plagues as in The Walking Dead,4 no magical dragons à la Game of Thrones. There’s a smoke monster but it just happens to be the main character. Hearing story points in advance is unfortunate but certainly not catastrophic. It’s not plot that makes Mad Men the best series on television; it’s depth.5 That alone makes it a period piece far more than the fins on the cars and the fondue pots in the kitchen. There’s an arms race raging in the world of cable dramas these days, the likes of which hasn’t been seen since the Bay of Pigs. With so many scripted shows vying for a limited number of eyeballs, networks are unlikely to green-light anything lacking a massive, head-turning hook: The science teacher cooks drugs! The neighbors are spies! More and more, the trend is toward series built around big questions — Is Nicholas Brody a war hero or a terrorist? — with the knowledge that the audience’s dedication will wax and wane depending on how you go about answering them.

As it enters its penultimate season, Mad Men is as removed from TV’s trumped-up campaign of shock and awe as Roger Sterling is from sobriety. The series may have snuck onto the air in the drowsy summer of 2007 with an easily referenced glamour and a Trojan horse hook — Who was Don Draper? No, who was he really? — but ever since then, Weiner has been waging a high-minded stealth campaign against viewer expectation. There was no “will they or won’t they?” to Don and Betty’s divorce. They did. The decision to dissolve Sterling Cooper and start a new firm was hatched up and realized in a single episode. The drama tends to come from the tragic inevitability of events, not their shocking revelation. When Peggy walked away last season, everyone in the audience already knew what Don didn’t: There was nothing he could say to make her change her mind.

In a sense, this is all in keeping with the lessons Weiner learned on The Sopranos, a cerebral tiramisu that submerged its psychological mindfuckery beneath alternating layers of sex and violence. From the beginning on Mad Men, even when sales of bitters were booming, Weiner never wavered from his belief that the circumstances that drive a man to drink are inevitably more interesting than the drink itself. But in 2011, after successfully negotiating both a fat new contract and the unquestioned authority that came along with it, Weiner seemed to slip the bonds of traditional narrative altogether. The fifth season passed like a dream, digressing into cinematic formalism and lingering on unsubstantiated feelings of dread. A toxic fog lurked outside the oversize windows, murderers haunted the headlines and the streets. Don’s subconscious pushed a strangled woman underneath the bed, suggesting a savage schizoid split between desire and need that was echoed straight down the call sheet. It was there in Ken Cosgrove’s sad robot fiction, in Pete Campbell’s unstable commuter kiss-and-ride, and in Betty Francis’s lonely self-flagellation with a can of Cool Whip. The biggest thing that actually “happened” in Season 5 — the suicide of Lane Pryce — felt rushed, like an afterthought. Weiner barely let the body turn cold before pushing us back out into a chilly ocean of internal conflict and regret.

In retrospect, the most telling — and, in its own small way, revolutionary — choice Weiner made last year occurred in the first of what has now become a tradition of two-hour premieres. Not only was Don actually married to Megan — rash decisions have real consequences both in the Mad Men writers’ room and in the scripts that emerge from it — but she knew all about Dick Whitman: his stolen identity, his secret shame, and all of the strange and terrible things that had happened to him in far-flung places like Korea and California. With that one swift stroke, Weiner removed the last of the questions remaining from his initial, less ambitious vision for his show. Well, he didn’t remove it, exactly. The show is still, more than ever, about just who Don Draper really is. But it turns out the soap-operatic secret our dapper hero had been hiding was nothing but a Band-Aid pasted over a far deeper wound. Identity and purpose are much more elusive than a set of dog tags or a bespoke suit. They can’t be bought with a big salary nor conquered with charm. And, despite Don’s desperate searching, they’re equally unlikely to be discovered lurking at the bottom of an old-fashioned or in the bedroom of an alluring stranger.

“I had an experience” is how a certain character may or may not put it on Sunday night,6 and it perfectly captures the unfettered, pure id weirdness that has overtaken Mad Men. Everything that occurs in the premiere feels at once natural and unexpected, hilarious and haunting. It’s this unpredictable dream logic that has rocketed the show to creative heights unparalleled in the history of television.7 There’ll be no easy resolution or predictable endgame awaiting us in these last two seasons. There are no winners and losers, and Don isn’t going to be “found out.” There’s not even a road map of what’s to come, outside of wherever Weiner’s muse takes him. Mad Men is the only show on television willing to follow its characters down the darkest rabbit holes and not flinch at whatever half-formed night terror might be hiding there. There’s no shorthand for this sort of thing and hardly any precedent. It’s barely possible now to sum up what Mad Men is about, really, other than everything. It’s a quirk of Weiner’s brilliance and evidence of his paranoia that the more secretive he’s become, the fewer concrete ideas there are to give away.

I get why people seek out spoilers. Really, I do. We’re all terrified of the unknown and each of us burns with a furious desire to peek ahead: to be the first to see what’s coming around the corner, to have the chance to mark the future before it puts its mark on us. More than anything, that fear is what Mad Men has come to embody. It’s why Don only swaggers in the office, where he’s able to bend messy emotions into taglines, craft painful memories into campaigns. It’s why Peggy moved on, why Roger dropped out, and why we continue to tune in.

But the thing I don’t think Weiner realizes is that spoilers, in a larger sense, are also what make his show tick. The reason Mad Men is set in the ’60s isn’t because the clothes were better (though they were) or the misogyny was worse (though it was). It’s because the distance allows us to see the characters the way we’re unable to see ourselves: as unwilling actors trapped on the unforgiving treadmill of time. We knew long before they did that JFK would be assassinated, that Dylan would go electric, and that the Beatles would blow their minds. There’s an air of inevitability and sadness hanging over these final seasons, whatever years they encompass, because we know that the peace and love of Haight-Ashbury is bound for the drug-filled doom of Altamont, that Martin Luther King Jr.’s dream will be derailed by a bullet on a hotel balcony in Memphis. But most of all we know that, like us, every one of these brilliantly realized characters, so alive and vibrant in the moment, so desperate to stay afloat amid the riptide of history, will eventually grow old and die.

We may not know the specifics, but we know all too well how Mad Men will end. Still, if Weiner doesn’t want me saying anything about the season premiere, then I’ll happily obey. I’m just not sure what difference it’ll make. Life without spoilers is exciting and unpredictable. It’s also called “life.” What’s scary about the roller coaster isn’t the drop. It’s the excruciatingly slow climb when you can see the fall coming yet are utterly powerless to stop it.