The Other Dream Team 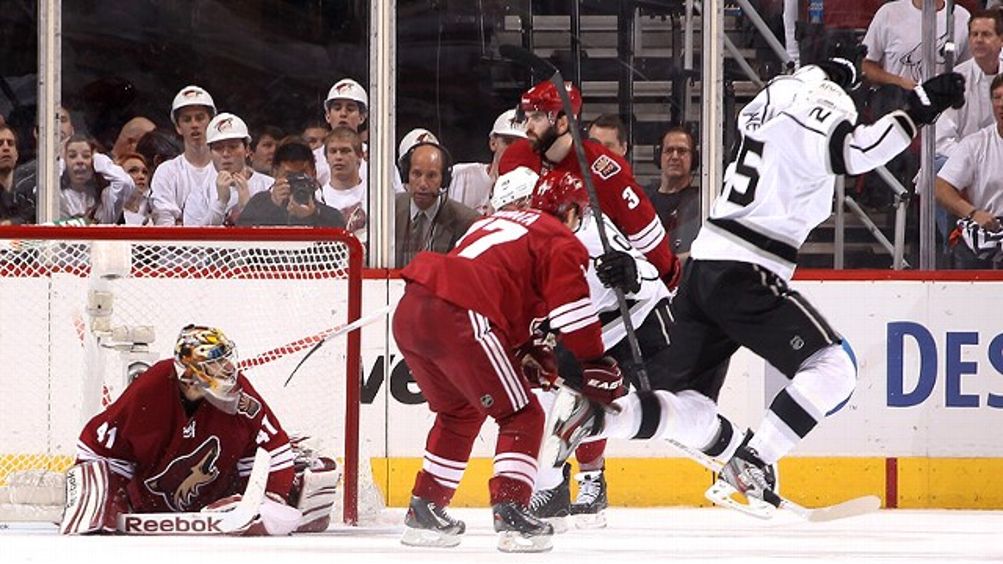 One of the playoffs’ more compelling, seesawing, and meltdowning games ended on a sour note Tuesday night when Kings captain Dustin Brown made a questionable but uncalled leg-to-leg hit on the Coyotes’ Michal Rozsival in overtime that was followed by L.A.’s Dustin Penner (Dustin freaking Penner!) scoring the overtime series winner on the very next play.

He was speaking in the echoes of the unconsolable, even repeating the word “uncle” twice, as if in numb surrender. Goalie Mike Smith, on the other hand, turned to hyperbole in the aftermath. “If Raffi Torres gets 25 games for a hit during the play, then this guy [Brown] should be done forever,” he said. (He’ll be done for never: The league declined to call any sort of disciplinary hearing on the matter.)

An arguably missed call that helps put the Kings in the Stanley Cup finals? Sounds kinda familiar: In Game 6 of the 1993 Western Conference finals between Los Angeles and Toronto, with the Leafs up three games to two, referee Kerry Fraser missed a high stick by Wayne Gretzky, who scored on the next face-off to win the game. (The Kings would advance to the Cup finals in seven games.)

In a column discussing the myriad penalties and odd situations that took place in Tuesday’s Game 5, Fraser himself made the comparison, adding that “While some Leafs fans have forgiven me, many have not. All fans that are old enough to remember have not forgotten; including me!”

After Penner’s goal, Smith, Doan, and others like Martin Hanzal were visibly outraged by the sequence of events, which meant that the customary handshake line got a little bit shaken up. Screaming at each other while still shaking hands is everything I love about hockey. Still, the looks on the faces of the Phoenix Coyotes have been hard for me to, no pun intended, shake.

They’re angry, yes, and they’re frustrated, and Doan looks like he might gnaw off someone’s head. But there’s also something else there: a wild, flailing look in their eyes, a futile flash of “not this way,” of “no, please, not yet.” Those pleading expressions, Doan’s desperate repetition, Smith’s petulant bombast — it reminded me of nothing so much as the behavior of someone getting unceremoniously dumped.

“‘Things happen, people change,’ is what Amanda said. For her that covered it. You wanted an explanation, an ending that would assign blame and dish up justice. You considered violence and you considered reconciliation. But what you are left with is a premonition of the way your life will fade behind you, like a book you have read too quickly, leaving a dwindling trail of images and emotions, until all you can remember is a name.”

He’s talking about the reeling-into-healing process that happens post-breakup, but he might as well have been describing what it’s like to get knocked out of the playoffs, to be dismissed before you’re ready to leave, to be cast aside cruelly by your adored game of hockey — and then to watch helplessly as someone else better than you is ultimately embraced by the love of your life.

The titular brightly lit big city of McInerney’s novel is also finding itself a game away from that same empty feeling, as the New York Rangers now trail the Devils three games to two with the series heading back to New Jersey on Friday night.

On Monday, the Devils turned in a Game 4 performance so dominant that it left me surprised the Rangers had somehow eked out two wins in the series. (There but for the grace of Lundqvist, etc.) One of them, Game 3, had been the type that can be crushing to an opponent: The Devils outplayed the Rangers for the majority of the game but ultimately, stymied by outstanding goaltending, let it slip away.

The tables turned in the pivotal Game 5, however, with New York the team that ended up with plenty to regret. As they have all series long, the Rangers came out to a sluggish start, and as they occasionally have, the Devils made them pay. Goals from Stephen Gionta and Patrik Elias gave New Jersey a 2-0 lead just 4:13 into the game, and Travis Zajac added a third goal midway through the first — one that a mediocre Lundqvist should have stopped — that left the initially raucous Garden crowd sitting in stunned silence.

It was the first third playoff goal in his career for Gionta, who played in the AHL all season before being called up for the Devils’ last regular-season game.

“It’s huge, especially for our confidence, to get out and have a good start,” said Gionta, the bigger little brother of the Canadiens’ captain, Brian (who won a Cup with New Jersey in 2003). “Especially tonight, you know, electric-building. I think that benefited us well.”

Still, the Rangers, playing the kind of balls-out game that often accompanies a big deficit, managed to claw back bit by bit. A late first-period score from Brandon Prust, back in the lineup after a suspension in Game 4, gave the Garden some pep heading into the first intermission. Goals early in the second and third periods tied the game for the Rangers, who looked to be playing their finest hockey in over a week. (John Tortorella agreed afterward that it was his team’s best game of the series.)

“I think when you don’t have a lead, when you’re just playing … your mind-set changes just a little bit, and that’s all it takes, a fraction,” said Devils head coach Peter DeBoer after the game. “You’re a step slow on the forecheck, maybe I shouldn’t be going here, and then you’re in between. And that’s when you get caught.”

But, as has been the case all postseason long, it was the Devils’ forecheck that led to the game-winning goal from Ryan Carter with less than five minutes to play in the game. The play of Carter and Gionta, along with linemate Steve Bernier, was so strong and dominant throughout the game that several people noted that they weren’t a fourth line, they were just a line, and a great one at that. The fact that they were out on the ice in a tied game’s final minutes speaks volumes.

“I don’t know if we’re standing here right now” without them, said captain Zach Parise of the trio. (After a stretch where he scored five points in nine games, Parise has added five more in the last two alone.)

“I wasn’t expecting this,” DeBoer admitted.

Both teams have reasons to be optimistic heading into Game 6. The Devils have been the clear better team, and they’ve shown that they can close a series out, having just defeated Philadelphia on the road in five games. For all the worries that the Prudential Center would be flooded with savvy Rangers fans (and for all the silly gimmicks leading up to Game 3), I detected a pretty resoundingly pro-Devils environment for Game 4.

The Rangers, meanwhile, have survived two seven-game series, including a first-round 3-2 deficit to Ottawa in which they won an away Game 6.

“We’ll have to rely on it,” said a somber, quiet Brad Richards after the game, referring to the team’s experience facing elimination earlier in the playoffs. “If we go back and play like we did most of this game and keep pushing it that way, we’ll have a chance.”

But, as John Tortorella noted after Game 4, there’s a team on the other side of the ice that wants to win just as badly. And, as I’ll note right now, it’s the better one.

Ilya Kovalchuk may not have scored in Game 5, but he had a hand in three of the Devils’ five goals. His twirling, diving play to keep the puck in the zone led to Patrik Elias’s score 4:13 into the first period to give New Jersey a quick 2-0 lead:

He also assisted Zach Parise (if unspectacularly) on a nail-in-the-coffin empty-netter. And while he wasn’t officially credited for a helper on Ryan Carter’s game-winning goal, his physicality in the corner directly created the scoring opportunity.

All series long, the Devils forecheck has felt like that moment of discovering an insect infestation: First you see one harmless bug, then another, then you realize with horror that the things are crawling all over the damn place and they’ve got you completely outnumbered and ahhhh one just went up your nose and SCOOOOOOORE!

On an unrelated subject, I enjoyed this goal from Keith Yandle, too.

Piling On the Pylons: The Last Few Days’ Worst Performers

When a heated, finger-pointing confrontation took place between John Tortorella and Peter DeBoer during Game 4 of the Eastern Conference finals, viewers were treated to yet another delicious Pierre sandwich served on angry coach bread. But the meal was pretty bland: McGuire opted to mute his mic to avoid picking up curses on live television, and even afterward he failed to divulge exactly what he’d heard.

Criticism of his lack of flavor may have been a bit overblown — clearly if Pierre (or Glenn Healy, who plays a similar position in Canada) decided to parrot everything he heard during the course of a game, the role of “between the glass” analyst would not be long for this world.

Still, his reticence is probably a leeeeeettle extreme. In an interview with Newsday‘s Neil Best, McGuire would only share that “the coaches’ differing backgrounds came up in the discussion; DeBoer is a product of the Canadian junior system and Tortorella of the American college system.” I don’t think anyone would be all too scandalized if they knew that — and I’m just spitballing here, based on the euphemistic evidence — Torts told DeBoer to “go back to [expletive, I’m assuming] juniors.”

As Tortorella (or Peter Laviolette) might say: Just give us some jam!

There’s a lot that I want to say about the CBC’s strange announcement of a partnership with While the Men Watch, a website described by its owners as “a sports talk show for women, Sex and the City meets ESPN, with banter from a woman’s point of view.”

While I work on better organizing my complicated thoughts, though, I’ll just point you to a sample post: Love Me Like Lundqvist: 5 Sex Games for Hockey Season. “During each period of the game, take note of your favorite straddle, dive or stretch by the goalie in net and make your man act out the position with you during each commercial,” the post advises. Sounds … fun? (Very Fifty Saves of Grey.) If things don’t work out with CBC, I think there’s definitely a future at Cosmopolitan. Doughnut, anyone?

Following Wednesday’s win over the Rangers, Marty Brodeur issued a challenge to fans at Madison Square Garden regarding the mocking “Maaaaarty” chant that filled the arena after the Rangers had clawed their way back with three straight goals to tie it up at 3-3.

“That was great,” he said with a smile. “That’s as loud as they’ve done. If I come back for Game 7, I hope they are going to do better.”

The blithe acknowledgment of the cheers AND a well-executed reverse jinx on his own team? Troll on, you crazy diamond. Troll on.