Coldhearted: Some Losses Are Forever 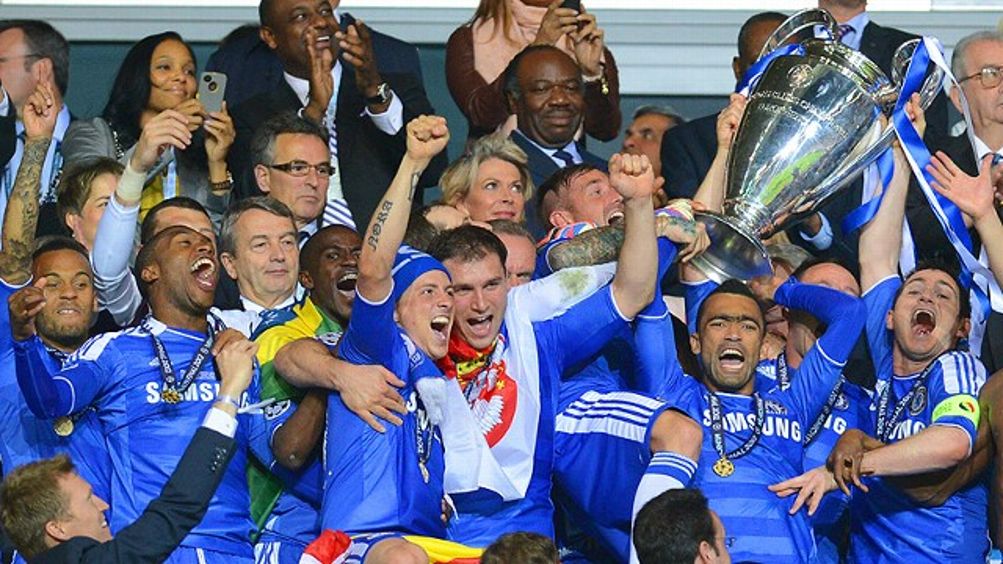 If you take the long view with Chelsea — the view that starts on the day Roman Abramovich first wrote his name on the club in 2003 — the amazing thing isn’t that they won the Champions League but that they won it the way they did — as underdogs, riding on luck and drama. Consider:

1. Chelsea became the champions of Europe while finishing in sixth place in their own country, the worst domestic-league finish of any team since the European Champion Clubs’ Cup became the Champions League in 1992. If they hadn’t won the tournament, they wouldn’t have qualified to play in it next year.

2. In the quarterfinals, Chelsea overturned a 3-1 first-leg deficit against Napoli to win 5-4 after the home leg at Stamford Bridge. This happened after a late Lampard penalty forced extra time, allowing Branislav Ivanovic, who has scored eight goals in 107 appearances for Chelsea, to slot home a Drogba cross in the 105th minute.

3. In the semis, they blew a 1-0 first-leg lead against the hugely favored Barcelona, went down 2-0 in the away leg, saw John Terry sent off in the first half, and somehow, with 10 men, came back to win 3-2 when Fernando Torres — he of the recent 1,541-minute goal drought — scored on a breakaway counter in the 91st minute.

4. In the final, again playing against a favored team at that team’s home stadium, and now missing four key players due to suspension, they again fell behind, needing late Drogba heroics, extra time, a colossal Petr Cech save against Arjen Robben, and a comeback during penalties (including more late Drogba heroics) to win. Bayern had a 43-9 shot advantage and a 20-1 advantage in corner kicks. Chelsea’s one corner led to Drogba’s match-tying goal.

You know those scenes in Friday Night Lights when Dillon comes back to win on a four-play, 240-yard drive that ends with a 90-yard Hail Mary with 0.001 seconds left? Chelsea did that in the Champions League against three straight opponents, two of whom (Barcelona and Bayern) finished 1-2 in both possession and pass-completion rate in Europe, one of whom (Barcelona) was an era-defining team that had won two of the last three Champions League titles. If it hadn’t been Chelsea — a massively well-funded English club with global reach and an owner who owns multiple submarines — we would have talked about this as if it were the Cinderella run to end all Cinderella runs. No matter how dire their situation looked, Chelsea just kept surviving, trailing streams of exclamation points, and somehow repeatedly blowing up the clock a split second before the minute hand touched midnight.

It’s hard to remember now what a disruptive force Chelsea was in world soccer during the first few years after Abramovich bought the club. Back in 2006 — the year the club won the second of its two straight Premier League titles under Jose Mourinho — the novelist John Lanchester joked that he was now supporting Chelsea “on Maoist grounds,” and his friend responded, “I think that’s more Pol Pot–ist.” That was how Chelsea seemed back then: like a terrifying power that was either going to remake the game or burn it to the ground, if not both.

Years before Manchester City batted an eyelash toward Abu Dhabi, it was Abramovich’s takeover at Chelsea that established the archetype of the shady superbillionaire who buys a soccer team to use as his personal plaything. The old, established hierarchy of powerful clubs — the Manchester United/Real Madrid cohort — certainly ran on money, but even the top clubs were shocked by the sums Abramovich could casually throw around — £21 million for Shaun Wright-Phillips, £24 million for Drogba, £31 million for (gulp) Andriy Shevchenko. Not all these players worked out (see previous gulp), but what difference did that make when Chelsea could go back to the well for £30 million whenever they felt like it? European soccer, which had no salary cap, no luxury tax, very little revenue sharing, no draft — almost no parity-fostering features at all — had no defense against this. Chelsea looked upon the dynamics of the sports economy and just luxuriantly did not give a shit. Any player in the world was potentially theirs for the taking.

This was also right around the moment when the Premier League stopped being an English sports league with international appeal and became an international sports league that happened to be based in England. Knowingly or not, Abramovich exacerbated all the tensions associated with the league’s rush toward globalization. He was a trembly-lipped, bodyguard-flanked petro-oligarch with close ties to Vladimir Putin. He was the long-distance governor of a remote Russian province. (Chukotka forever!) He collected yachts. He built the club both with global capital and in the model of global capital — ruthless, chaotic, indifferent to local tradition. Arsenal had filled squads with foreign players, but only in the service of Arsene Wenger’s finer principles; they had to buy this Ivorian and this Estonian, because of the harmony and balance that would result from bringing them together. Abramovich, by contrast, bought foreign players the way other people might shop for shoes online. It wasn’t about team chemistry or even tactics. It was about acquisition for its own sake, about taking whatever you wanted. Or anyway, that was how it seemed.

Predictably, Chelsea was feared and hated. Abramovich compounded both emotions by hiring Jose Mourinho to manage the club in 2004. The new coach reveled in the panic Chelsea caused and did everything he could to provoke the English soccer establishment, from calling Arsene Wenger a “voyeur” to signing the widely loathed Ashley Cole as the team’s left back.1 Mourinho created the mother of all siege mentalities around the club, and it worked frighteningly well: In 2004-05, Chelsea demolished the field during the most annihilating championship run since the Football League was founded in 1888: 95 points, 29 wins, 15 goals (15!) conceded all season. They won again in 2005-06. For four and a half years — 86 games, stretching from March 2004 to October 2008 — Chelsea didn’t lose a single home game.

It was easy to hate them, but there was also something thrilling about the ease with which they turned English soccer upside-down. Top-level European soccer is essentially a racket that benefits the big clubs at everyone else’s expense. The only thing capable of destabilizing the status quo is a massive amount of money. For around five years, from 2003 to 2008, Abramovich’s billions were the most anarchic force in the sport. Chelsea wasn’t staging a proletarian revolution; that’s not how billionaires operate. But they were doing the next best thing — punching Manchester United in the mouth and swaggering off with both middle fingers up. Their audacity was its own kind of greatness, even if it was founded on an even more rigged game, global capitalism.

Naturally, this couldn’t last. Chelsea spent three seasons as the flashpoint of English soccer — the club with the most money, the deepest and most talented squad, the most flamboyant coach, and by far the most controversial headlines.2 At some point, though, the rest of soccer started to catch up. More billionaires bought into the game. Some of them, like Sheikh Mansour at Manchester City, were even richer than Abramovich. Other clubs got better at exploiting global finance, sponsorship, and the weird pathways of 21st-century commerce (cf. Real Madrid’s plan to build a $1 billion resort island in the United Arab Emirates, which reads like something Jerry Jones dreamed up on a particularly sweaty peyote trip). UEFA passed Financial Fair Play, a set of rules that should/might/could possibly curtail runaway sugar-daddying in European soccer.

At the same time, Chelsea itself tore down some of the walls that kept it separate from other big teams. For years, Chelsea was at entertaining odds with the G-14, a supergroup of the biggest clubs in European soccer. After a lot of cloak-and-dagger maneuvering from then-Chelsea executive Peter Kenyon, the G-14 dissolved in January 2008 and was replaced by the European Club Association, a larger group that does include Chelsea. But the typical radicals-to-congressmen rules applied: Every time Chelsea made it a little further into the game’s aristocracy, the club seemed a little less dangerous.

More urgently, Abramovich decided that winning the European Cup was his overriding top priority. After firing Mourinho’s successor, the toadlike, thoroughly unqualified, and surprisingly successful Avram Grant — whose run included a 16-match unbeaten streak, a razor-thin loss on penalties in the 2008 Champions League final in Moscow, and a press conference in which he refused to answer any questions3 — Abramovich cycled through a sequence of far more conventional big-name managers like Phil Scolari, Carlo Ancelotti, and Guus Hiddink. He demanded “entertaining football” in place of Mourinho’s dull but punishingly effective 4-5-1. Where Chelsea had once seemed totally indifferent to the established ways of doing business, now they started to seem like another Juventus or Madrid — a big club answerable to the whims of the fans and the media. They even started sounding serious when they talked about turning a profit.

People (including me) still complain about Chelsea and their money, but the truth is that they’ve been pretty normal for a pretty long time. Manchester City has more or less taken over the “crazed and embattled vessel of the super-rich” role at this point, with the difference being that their most provocative antics now feel kind of homespun and familiar, because Chelsea’s already been there. Soccer has a way of assimilating whatever weird new challenges the clubs throw at it, and the aging squad of ex-controversialists at Stamford Bridge is proof that the game will still be there when Carlos Tevez finally calms down.

The terror that Chelsea represented in those early years was that with enough money, all the surprise could be taken out of the sport. When you spend a hundred million and then concede 15 goals across a 38-game season, you raise the legitimate fear that you will simply buy all the talent, win all the matches, and conquer European soccer with your unstoppable army of math. The irony, of course, is that by winning the Champions League with a frenzy of improbable, last-second comebacks, Chelsea finally conquered European soccer behind exactly the sort of unpredictability that they once threatened to eradicate. Somehow, winning the biggest tournament in the game was the least fearsome and most accessible thing they’ve done in the Abramovich era. It took frantic adjustments, the way it does for everybody, and a different kind of good fortune. After nearly a decade under soccer’s most iconoclastic rich dude, Chelsea now wins and loses on lucky breaks and heart, the way everyone loses and wins.