When Do We Draw the Line on NFL Violence? 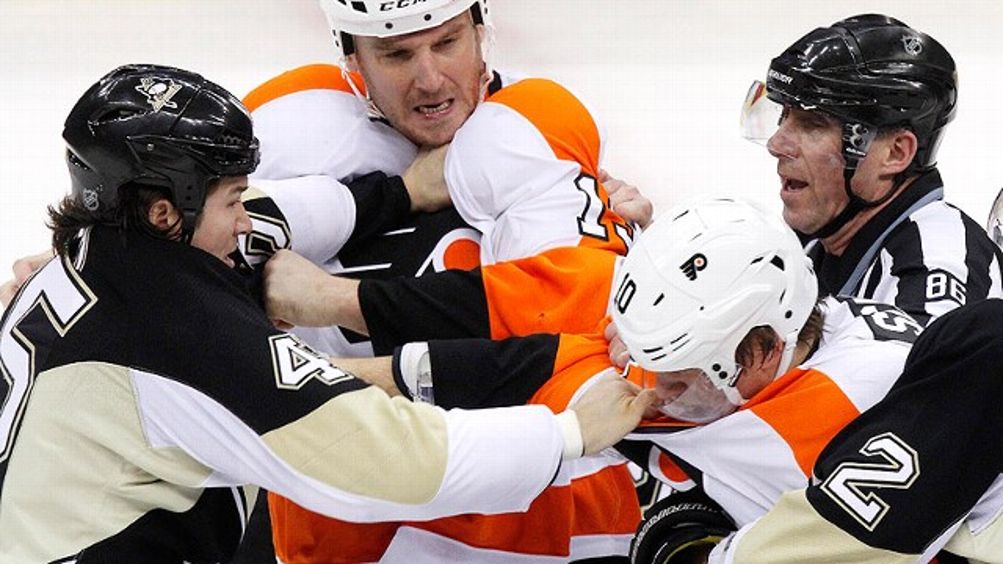 Greetings from Tampa, Florida, where the air is warm, the trees are palm, and I got sunburned yesterday walking a few blocks to CVS to buy a Diet Coke. It’s what Tampa mayor Bob Buckhorn warned against as he stood on the tarmac at the Tampa Jet Center to welcome the Union and Ferris State teams who flew in on Tuesday afternoon to compete in the NCAA Frozen Four.

“I see some pale faces,” Mayor Buckhorn told the Boston Herald. “They’ll probably be sunburned in about five minutes.”

Tampa isn’t exactly a location synonymous with college hockey. But it’s a fitting venue for this particular Frozen Four, which features a mix of old-timey powerhouses (BC and Minnesota) with newcomers (Ferris State and Union) seeking to establish their names in hockey circles — in much the same way that Tampa itself has. (The city won the bid to host the event based in large part on the Tampa Bay Lightning’s successful 2004 Stanley Cup run.)

So far, Tampa has been thrilled to show itself off. When the teams touched down on Tuesday, it wasn’t just the mayor waiting for them — also on the tarmac were a reggae band and a sea of Florida youth hockey players holding up their sticks for the players to walk underneath.

“We weren’t expecting the arrival we had,” said Ferris State’s senior co-captain Chad Billins on Wednesday. “You do feel kind of like an ambassador to younger hockey or youth hockey.”

Minnesota head coach Don Lucia had a similar reaction: “We got off the plane last night and there’s a band sitting on the tarmac waiting to play, and those things certainly didn’t take place years ago,” he said. As for the location: “I think it’s important to have it in traditional areas, but I think it’s great to have it in some non-traditional areas at times, too, because it does open up some eyes.”1

The Frozen Four won’t just feature local fans looking at the spectacle with wide-eyed awe: Neither Ferris State nor Union has ever made the event. (BC and Minnesota have combined for 43 appearances and nine titles.) All four teams were the regular-season champs in their respective conferences, something that hasn’t happened since 1996.2 But only Boston College really comes in with experience, having made it to the Frozen Four five times in the last seven seasons and winning the national championship in 2008 and 2010. Minnesota, on the other hand, won back-to-back titles in 2002 and 2003 but has gone relatively cold (for them) since: The seniors on this squad had never even made the NCAA tournament before this year.

While the early semifinal (between Union and Ferris State, with a 4:30 start) certainly lacks the name-brand punch of, say, BC-Minnesota in prime time, Union and Ferris State players and coaches all bristled on Wednesday when asked whether their game has a “junior varsity” element to it. (The reporter asking made sure to blame the question on what “people on social media” have been saying.)

“I would certainly like to see Ferris State and Union’s varsity teams,” deadpanned Union coach Rick Bennett, who is in his first year as head coach. “They must be pretty good if we’re JV.”

I’ll have full reports from tonight’s two games tomorrow, varsity or not. For now, a few words about those other hockey games — the ones that lack the soundtrack of a good old college marching band — that have been going on. And then I’m off to buy some SPF 60.

One of Patrick Kane’s two goals in the Blackhawks’ 5-4 shootout loss to Minnesota on Sunday was this velvety and nonchalant wrister. I feel like if the net didn’t get in its way, the puck would have just continued to gain speed until it ended up in orbit or something.

And here’s a kinda similar setup from Wednesday night’s game between the St. Louis Blues and the Detroit Red Wings. The Blues came out to a 2-0 lead, but Detroit came back to tie the game with this pass from Pavel Datsyuk to a waiting Johan Franzen. The Wings would go on to win in a shootout.

Alex Burrows scored the goal here in the Canucks’ Tuesday game against Anaheim, but it was Henrik Sedin’s play that led to the phrase “a little whoop-de-doo around Saku Koivu” being spoken aloud, and for that we are thankful.

For the evil schadenfreudists among us, administrative mishaps by NHL front offices have long been a delightful sidebar to the season. From the botched free agency filings in Chicago (and Nashville!) to the “smudged fax” in Tampa to Ottawa apologizing, hockey has a long and inglorious history of these sorts of mistakes.

The latest whoopsie-daisies moment come courtesy of a franchise that has essentially been one large administrative snafu for the better part of a decade: the Oilers. Under the NHL’s collective bargaining agreement, teams can only make four transactions with their AHL affiliates after the trade deadline. Edmonton tried to make a fifth, calling up Magnus Paajarvi from Oklahoma City on Friday and then, upon realizing their mistake, sticking him right back on the plane like a weary traveler turned away at customs. Oilers president of hockey operations Kevin Lowe later complained that the rule was “ludicrous,” as if that absolved Edmonton from having to play by it.

The essential reaction to this whole affair comes from Tyler Dellow. A sampling:

John MacKinnon at the Edmonton Journal basically handwaves all of this away: ” … the Paajarvi ‘easy-come-easy-go’ fiasco is mighty small beer in the overall scheme of things. It’s embarrassing, but everybody lived, for example.”

He has a point: If you have “death” as your standard of failure, then yes, it’s like the 32nd successful season in a row for the Oilers. Sure, it’s six years without a playoff appearance and they’re within spitting distance of clinching the title of “Worst team since the lockout,” but NOBODY HAS DIED. For those of us who aim slightly higher, who think “not making the playoffs for six years” should be a measuring stick rather than “nobody died,” this is another sign the people in the front office have no idea what they’re doing. Picking Hall and RNH is the easy part.3 Actually, complying with the rules in the CBA is pretty bloody easy too. The hard part is moving from “having a bunch of talented young players” to “being an elite hockey team.” I’ve no idea why, other than hope, people would expect that of this group.

The comments are worth a read as well, if you’re the kind of person who gets off on the misery of others. My favorite line: “I can’t wait till Lowe is the GM of Team Canada at the Worlds. I assume he will declare the fact that we can only have players from Canada as ‘stupid’ when told he can’t have Malkin on his team.”

You know the playoffs are quickly approaching when everyone in and around the NHL just utterly loses their minds. There are so many choice bits of commentary from this past week that we’re going to play a good old-fashioned matching game called “WHO SAID WHAT ABOUT WHOM?”

1. “I thought Dan Bylsma should have taken off his skirt and gone over there.”

3. “Maybe you need Hollywood in the playoffs. I’m not sure.”

4. “What Jeff Vanderbeek has proven after five years of trying to work with him [is] that he is a highfalutin, high-class huckster and hustler. He came into the city with a mouthful of promises, but a pocket full of lies.”

5. “Little goody two shoes … He’s not the perfect gentleman. He’s not the sweet kid you see in interviews with his hat pulled down over his eyes. I’d say screw him, hit him.”

8. “Everyone in boston! I would love u 2 know COREY SNYDER’S girlfriend fingered me and told me off about my bruins hat today she is from BOS! And incase you don’t know SNYDER he is the Canucks loser back up goaltender ! I guess haters are guna hate! Big F U Snyder. I guess haters are guna hate but keep your girl in line … Vancouver is my home ! Corey Snyder control your broad because she is straight classless, rude and acts like a trucker !! FYI I was at the game and around Vancouver and she was the ONLY one with a problem people actually were VERY kind ! She only had a problem!”

10. “Pat ran for the hills. Pat ran for cover. It was cowardly, and it was terrible.”

A. Oilers coach Tom Renney, sounding mighty Tortsesque in suggesting that officiating decisions are being orchestrated from on high, in this case in order to help the Kings make the playoffs. (I would do anything to see Gamemaker Gary Bettman sporting some Seneca Crane–style facial hair.)

D. Glendale, Ariz., mayor Elaine Scruggs, lambasting the NHL for their part in the ongoing Phoenix Coyotes saga. (I may have paraphrased her remarks.) (Also: How on earth did she think an escrow account worked?!) (Also also, this is a highly enjoyable read from a blog with a highly enjoyable name.)

E. Mike Milbury, suggesting that Dan Bylsma is a woman for not leaping over the boards during the aforementioned heated Penguins-Flyers exchange and beating someone with his shoe or something. (Hardy har, it’s funny — still — because women are the inferior sex, you see?)

G. Mike Milbury, on Pat LaFontaine’s (smart) decision in 2006 to back … away … slowly from the shambles that is the Islanders organization. (Much more on that from Justin Bourne at Backhand Shelf.)6

I. Sabres goalie Ryan Miller, pointing out that the Washington Capitals’ Brooks Laich comment that “we’re making the playoffs” sure ain’t no Captain Courageous “we’ll win tonight.” (The Sabres and Caps are essentially battling for the last Eastern slot.)

You can pick your friends
You can’t pick your family
Sorry, Andrew Ladd!