Back in the Day: Travel in the NBA

The Art of Pitch Framing 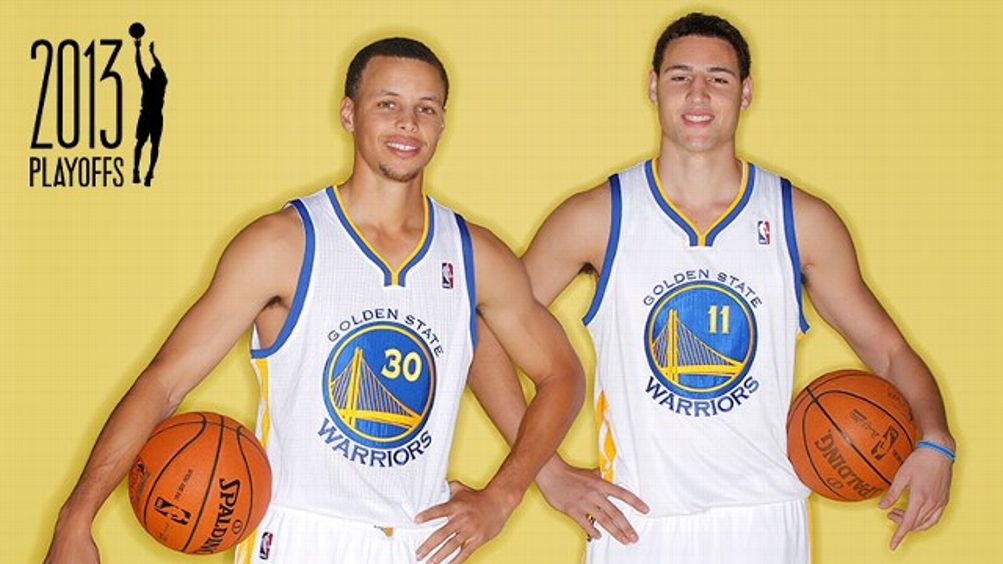 A wise man once told me, “All that glitters is not gold.” That man has never seen the 2013 Golden State Warriors play. This is the story of the golden team in the Golden State entering its golden generation as it begins to define the NBA’s true golden era.

This is the story of the 2013 Golden State Warriors.

Stephen Curry wakes up every morning in his Bay Area apartment, just steps away from Facebook headquarters. Like Facebook chairman and CEO Mark Zuckerberg, Curry starts each day the exact same way: He confronts the challenges of pure brilliance with a glance in the mirror. Curry has evolved into the league’s best player during the 2012-13 season. He has already been anointed the league’s best all-time shooter and is the new face of the league.

The son of former NBA legend Dell Curry, Steph credits his father for making him the player he is today, gracing him with a rare gene that has turned his jump shot into fine art. That jump shot is a self-contained Industrial Revolution, changing the way basketball is taught at every level of the game.

Curry is set for life financially with global endorsement deals, but the kid just wants to play the game to win.

His roommate and best friend, Klay Thompson, has lived with him since he was drafted two seasons ago. Sleeping on bunk beds isn’t always comfortable, but the hardness of the beds helps to transfer the message and tone of new but already legendary head coach Mark Jackson. The coach can do it all — call plays, make adjustments, and handle the media. In a poll of independent sideline reporters, Mark Jackson has been voted ‘best in-game interview’ for the second season in a row. He’s not like most coaches — Jackson understands that every interview is an opportunity to psychologically toy with the entire NBA, while also reinforcing his own team. Every time Coach (Not Phil) Jackson speaks, a nugget of truth, wisdom, and mental toughness is passed down to his team. Sometimes the message is about basketball, and sometimes it isn’t.

Unlike every other NBA team in the league, the Warriors live in a compound together during the season. Jackson is confident that this is the best way to instill his identity into the team. Players with wives, children, and girlfriends are allowed limited visitation hours, but many of the players accept this as a necessary sacrifice for the privilege to play for the Golden State Warriors. At night, Jackson’s voice is pumped in through an intercom, instilling positive and calming messages.

Klay and Steph hit the community area for breakfast, where they place an order with an unlikely chef. While Andris Biedrins has not made many appearances on the court in the playoffs, his egg white omelets have endeared him to the team and coaching staff. It is the sacrifice of players like Biedrins that has helped build a culture of winning in the Bay Area.

Thompson picks up a whole wheat pancake made by benchwarmer Richard Jefferson. The pancake leaves a lot to be desired, but Coach Jackson reiterates that if Jefferson minimizes turnovers, the pancake will effectively take shape on the griddle before that crucial first flip.

While game-planning for tonight’s Game 4 matchup against the Miami Heat, the young Thompson proclaims, “Dude. I’m gonna make like a million 3-pointers tonight.”

Oracle Arena’s days are numbered, but it will be remembered as a place where Stephen Curry and Klay Thompson rebranded the Golden State Warriors franchise. The plans for their new arena already have a statue of Stephen Curry built into a green space right by the Bay, his face now as recognizable as the nearby Golden Gate Bridge. A new NBA arena often means huge financial losses for a community, but it’s different in the Bay Area. By passing around a collection basket at games, the Warriors’ new arena will be 100 percent funded by the golden hearts of authentic fans.

The arena is packed with the most affluent Bay Area residents, all proudly sporting golden T-shirts. There are no tickets available on StubHub for any of the Warriors’ playoff games, setting a new standard for fan loyalty that was once measured in fake “sellout streaks.” This is an experience that can’t be bought, sold, or bartered.

Before the game, NBA MVP LeBron James approaches Steph Curry. The Miami Heat are down 3-0, their will broken after coach Erik Spoelstra resigned, unable to foresee a scenario in which he could defeat the Golden State Warriors in his lifetime. The series has crushed the souls of the NBA’s Biggest Three, who once thought that the league was theirs to dominate.

“This is your league now, young fella,” says LeBron. Earlier in the series, the former king called a press conference, turning over possession of his 2013 NBA MVP trophy to Steph Curry.

Curry smiles, but truthfully, the young marksman is getting a bit annoyed with LeBron’s flattery. He just wants to play the game the right way, which is a philosophy that has been instilled in him by head coach Mark Jackson.

The Warriors approach this game with the same focus and intensity that they would approach a seemingly meaningless game against the Charlotte Bobcats. Andrew Bogut wins the tip over NBA journeyman Chris Andersen. His ability to get in the air and reach high embodies the mental toughness instilled in him by head coach Mark Jackson. It’s surprising to many that he is the only no. 1 draft pick on the team.

Jarrett Jack secures the ball in the backcourt and calmly dribbles the ball as he is hassled by Mario Chalmers all the way down. Jack has finally found a place in the league, now that his mental toughness is finally understood by former player and media member coach Mark Jackson, who was once a mentally tough player, too. Jack swings the ball to Klay Thompson, fighting against Shane Battier to get free. He is nearly impossible to guard, since he can make any shot from anywhere within 37 feet, whether he is square to the basket or not.

He goes up for the shot, but instead opts to pass to Stephen Curry at the last second.

Curry has been guarded by LeBron James all series. While LeBron has played excellent defense and contested every shot, there is no solution for Stephen Curry. You cannot contain him. You cannot slow him down. You can only turn around and watch the ball fly into the net. It is a cruel fate for anyone guarding Stephen Curry, but like a North Korean citizen, you eventually become brainwashed. Your cruel reality is normalcy.

Stephen Curry handles the ball with the same purpose as his coach, former NBA player Mark Jackson, displayed during his own playing days. Curry jumps, spins, and fires his untraditional-yet-beautiful shot. LeBron must tackle Curry to have any shot of stopping the most beautiful jump shot in the world. The ball sails through the net without hitting the rim. The crowd erupts. Many fans in attendance, as well as the players and staff, will suffer long-term hearing loss for their time spent in Oracle Arena, but it doesn’t matter. Somewhere lost beneath the cheers, the referee has called a flagrant 2 foul on James, who made absolutely no play on the ball. The sound of the whistle was lost somewhere in the 157-decibel roar. At 160 decibels, the human eardrum instantly perforates.

Curry steps to the line and slashes the net with a perfect free throw.

Joe Lacob sits in the owner’s luxury box at Oracle Arena, smiling from ear to ear as his team is about to easily win the NBA Finals. He used to be an ordinary man like you and me, working 9-to-5 as a partner of a highly successful venture-capital firm. Whenever anyone uses AutoTrader.com to purchase a used car, or Invisalign to straighten their teeth without the ugliness of braces, you can’t help but think of Joe Lacob. But after his acquisition of the Golden State Warriors, maybe the real thing he invisibly aligned is the entire Bay Area and its basketball franchise.

After making millions and billions of dollars, he was finally able to spend his money on something priceless. You can pay for an NBA championship, but you can’t put a dollar value on what it’s like to watch the perfect team play the perfect game. Like every other game in the series, the Warriors are closing out Game 4 without any drama. The lead has reached 42, and even omelet-maker Andris Biedrins has 20 points, thanks to several perfect passes from Stephen Curry.

A dejected LeBron James, Dwyane Wade, and Chris Bosh sit at the end of the Heat bench, wondering how they could have made such a terrible decision. Or perhaps The Decision could never have topped The Fate, which is what America has aptly named the Golden State Warriors’ 2013 playoff run. 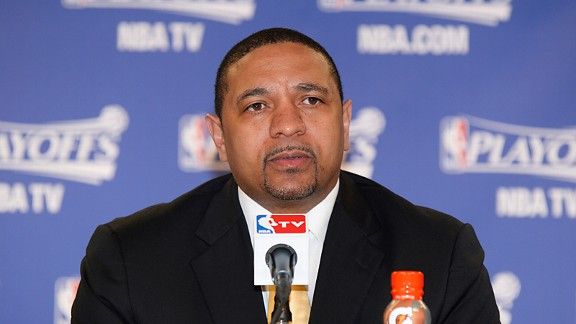 Mark Jackson gathers the team for one last huddle. The game has been out of reach since the first quarter, but the team is gunning for records: most points scored in a Finals game, most 3-pointers made in a Finals game, and highest 3-point percentage in a Finals game. Jackson knows he owes it to his players, the Bay Area fans, and the franchise to keep his foot on the gas pedal. Jackson is an old-school coach whose mental toughness and ferocity are transferred to everyone he interacts with, even the Starbucks employee who made his skinny vanilla latte this morning.

But there’s nothing vanilla about his championship coaching style. Once a highly regarded NBA broadcaster, Mark Jackson knows what it takes to win in the National Basketball Association (which is veteran slang for “the NBA”). He calls a final play. It’s been dubbed “Victory.” In this play, Stephen Curry dribbles the ball up the court and shoots it. The Warriors have been running their Victory play for the entire series, and there is simply no way for the Miami Heat to stop it. NBA insiders, stat geeks, and Twitter journalists have attempted to uncover the secret of Victory.

But only the Warriors know what makes the Warriors unstoppable, and that’s fine with Mark Jackson. The savvy coach already has a new play planned for next season. It’s called “Dynasty.”

The game ends with all the formalities of a championship celebration. Winners cry. Losers cry, too. Pleasantries are exchanged. Boastful owners thank the losing owners and their fan base. Coach Mark Jackson thanks his players, but they are insistent that his mental toughness was what inspired them, so he should be thanking himself. Champagne bottles are popped.

ABC lead sideline reporter Doris Burke grabs Stephen Curry for one last interview. She asks, “Could anything be better than winning your first NBA championship?”

Curry says, “Man, I could do this a million more times.”

The Golden State Warriors went on to win a billion NBA titles.