RealityTV Podcast: ‘The Bachelorette’ on PEDs 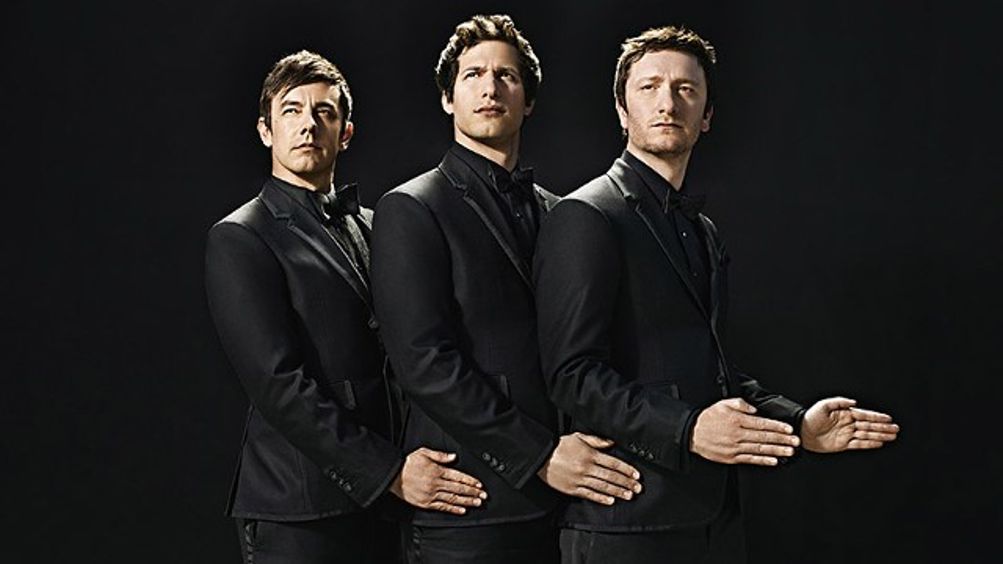 With The Wack Album, the Lonely Island arrives at an unlikely place for a web-oriented musical comedy rap trio: It is now a legacy act. Where Tenacious D and Flight of the Conchords only briefly tapped the zeitgeist before receding to cult status, the Lonely Island has maintained the same level of hip-hop parody prominence over the course of three records, dozens of videos, and several pop-culture cycles. If “Weird Al” Yankovic is the Elvis of comic pop, then the Lonely Island is the Beatles — though now that Andy Samberg, Jorma Taccone, and Akiva Schaffer are in their mid-thirties, their stranglehold on the perpetually shifting terrains of contemporary pop and cutting-edge middle school jackassery is more precarious than ever. At this point, The Wack Album shouldn’t be an ironic album title, and nobody knows this better than the group members themselves. “Even from the first album, we were like, ‘We’d better do this soon.’ You can’t fake rap when you’re too old,” Schaffer recently told Pitchfork. “Then again, rappers keep getting older, too, and they don’t stop rapping. So maybe, as the rap game matures, so can the fake rap game.”

As masters of the fake rap — or “frap” — game, it is the Lonely Island’s prerogative to stick with what got them here. Samberg, Taccone, and Schaffer no longer have the insta-meme mass-distribution network known as Saturday Night Live at their disposal, but The Wack Album still has a stacked supporting cast that includes Justin Timberlake, Lady Gaga, Kendrick Lamar, Pharrell Williams, Robyn, Adam Levine, Billie Joe Armstrong, Solange, and Too $hort. No song on The Wack Album has the crossover potential of “I’m on a Boat” or “I Just Had Sex,” but the Lonely Island benefits once again from credible production values and surreptitiously well-crafted hooks, as well as a deep scholarship of various strands of hip-hop history. (The Wack Album references everything from club bangers to crunk to Jurassic 5–style classicism.) And let’s not forget the secret weapon of the Lonely Island and so many lesser comic minstrels: vulgarity, which is served up with customary generosity. (Ladies and gentlemen, behold “I Fucked My Aunt.”)

In sound and form, The Wack Album is essentially the same record as 2009’s Incredibad and 2011’s Turtleneck & Chain. But thematically, the Lonely Islanders are starting to show their age. Taccone described The Wack Album in the Pitchfork interview as “our most mature album” — even if he’s joking, he has summed up The Wack Album accurately. I’ll go a few steps beyond that: This might be the most moralistic pop record of the year. The song “Go Kindergarten” is one of many tracks that skewer the pushy hedonistic posturing of so many recent pop hits: “Don’t think, just obey,” Robyn sings on the hook. “Because we put it in a song, so do everything we say.” There’s another lecture embedded in “Spring Break Anthem,” which contrasts meathead party rap with a sweet pro–gay marriage message. (“Bros before hos and chicks with no clothes and / slammin’ shots and marry a man.”) “YOLO” is about the opposite of living in the moment — when Samberg says that “life is a precious gift / so don’t get too crazy / it’s not worth the risk,” he’s setting up a joke about paranoia run amok, whether it’s over loud music ruining your ears or avoiding saunas because of rampant piranhas. But he’s also stating in plain language the worldview that pervades The Wack Album: Sure, pop music is fun and all, but it’s also sort of terrible for society.

I realize that I’m probably talking about The Wack Album incorrectly, since I’m discussing it in terms of music rather than comedy. From the beginning, the Lonely Island has been insistent about staying on the proper side of the comedy/music divide, even as the rest of the world has regarded their music with surprising (if not misplaced) seriousness. “I’m On a Boat” was nominated for a Best Rap/Sung Collaboration Grammy, after all, which Samberg has expressed misgivings about. “Generally, we try to make fun of ourselves and how we’re trying to take part in this culture that we don’t belong to,” Samberg told Pitchfork. “We always draw that line so people know that it’s comedy and not us trying to actually be musicians or rappers.”

The wrinkle here is that few comedy musicians have replicated the ephemeral contours of in-the-moment pop as well as the Lonely Island. The group’s best tracks hold up after the jokes have worn out from repetition — “I Just Had Sex” is a gag on grandiose cookie-cutter radio anthems that morphs into a genuinely ingratiating and uplifting song, no matter Akon thanking the world’s female population for letting him flop on top of them in his stainless steel robo-voice. In a sense, the convincing “realness” of the music is merely a vessel to sell the jokes, but you don’t have to laugh in order to enjoy it. On The Wack Album, there are plenty of moments that I enjoyed purely for the music: the Native Tongues–inspired bounce of “Spell It Out,” the Joy Formidable sample and Kendrick Lamar’s rap on “YOLO,” the Digital Underground–referencing “We Need Love,” the Southern rap swagger of “The Compliments.” If the music truly doesn’t matter on Lonely Island records, then a lot of effort was wasted on The Wack Album making it sound far better than it had to.

Musical merits aside, Samberg is smart to assert the Lonely Island as a strictly comedic proposition. Otherwise, it would be much harder to tell the difference between The Wack Album and “Thrift Shop,” the breakout single by Macklemore and Ryan Lewis and one of the biggest (and most controversial) rap hits of recent years. Like The Wack Album, “Thrift Shop” is jokey, infectious, and an example of white artists (to borrow Samberg’s words) “trying to take part in this culture that we don’t belong to.” The difference is that the Lonely Island makes its otherness the centerpiece of its act; at no point are they trying to “pass” as “legitimate” rappers, which shields them from accusations of gentrification. This nuanced but important difference in perception has enabled the Lonely Island to couch its commentary on hip-hop culture in an affectionate homage that doesn’t threaten to usurp the artists they’re cribbing from.

The Lonely Island has earned this distinction, even if the group is catering to basically the same audience Macklemore is — it could be argued that the Lonely Island created this audience. The first Lonely Island videos (including “Lazy Sunday,” “Bing Bong Brothers,” and “Just 2 Guyz”) appeared online in 2005, the same year YouTube launched. “Lazy Sunday” actually helped to popularize YouTube — the secondhand copies that started popping up on the site after it initially aired on SNL inspired the craze. The Lonely Island subsequently became one of the highest-profile benefactors of pop’s YouTube economy, playing a pivotal role in establishing the tropes that songs like “Thrift Shop” later followed to great success. The joke of every Lonely Island song involves some kind of juxtaposition between a prefab plastic pop reality and reality-reality — the best example on The Wack Album is “Diaper Money,” which extols the virtues of “wife pussy” and hustlin’ for baby supplies with gangsta-rap aggressiveness. This comic dissonance between our humdrum lives and our pop-star fantasies has been mined over and over again by other YouTube hits — what the Lonely Island started eight years ago has been repeated millions of times by YouTube users in their own homemade parody videos, as they similarly interface with a culture they love from the outside looking in.

The Lonely Island’s fondness for the Hot 100 is sincere as always on The Wack Album — at 20 tracks the record is overserved, but it’s mostly a dependably light and entertaining listen. The group has always had an underlying uneasiness with the ickiest aspects of pop — the conformity, the fecklessness, the gross materialism — but it’s much more pronounced here. The Wack Album isn’t really a thoughtful record (did I mention “I Fucked My Aunt”?), but with it, the Lonely Island has subtly repurposed its arm’s-length distance from the pop world in the service of gentle critiques rather than (just) straight-up goofs. Which means The Wack Album could very well be the beginning of the end for the Lonely Island. They aren’t exactly cool anymore. They’re dad-cool.