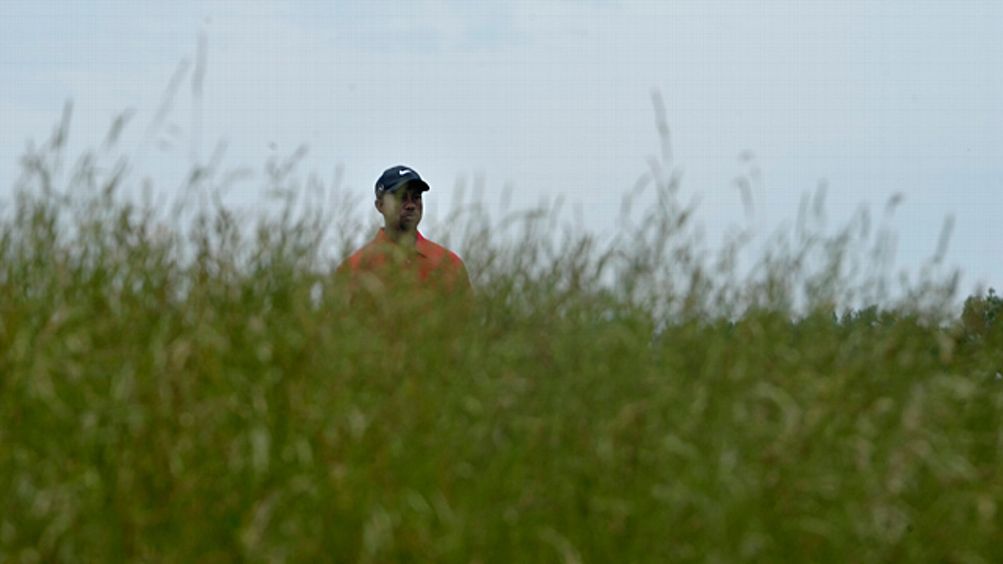 He was finished playing before I started watching. That was the curious and unsettling thing about it. The U.S. Open Golf Championship was on television Sunday, Father’s Day, also known as National Vegetative Paterfamilias Day in the homes of the similarly golf-afflicted. And I didn’t turn the thing on until nearly 5 p.m., and Tiger Woods already had shot his 74 for the day, already had shot his 13 over par for the tournament and, as far as I know, already had his feet up on the sofa somewhere watching whatever else was on television besides the final round of the U.S. Open Golf Championship. I have no idea if he saw Justin Rose hold off Phil Mickelson, who finished second in a U.S. Open for a truly astonishing sixth time in his career. What I do know is that this was the worst Open that Tiger has played since 1996, when he was an amateur who was smacking the gobs out of everyone in the sport, and a year before he and I collided in our strange and complicated way.

More on Woods and the U.S. Open

An annotated look at the illuminating GQ piece on a 21-year-old Tiger Woods.

In 1997, right before Woods won his first Masters, and right at the beginning of a preposterous run of success that eventually ended in a fashion that was merely preposterous, I was assigned by GQ, where I was working at the time, to do a cover profile of Tiger. Because of some things Tiger said, and because of some jokes he told, the piece became rather notorious, and I suddenly became a purported authority on the man. This was not a great hassle until everything about him came unstrung one Thanksgiving night, and I was supposed to have left so many bread crumbs in that piece that, it was said, the garish denouement was completely predictable. I thought this was silly, and I said so. Nevertheless, it’s odd to be so connected in the minds of so many people to someone you met for (precisely) two hours 16 years ago. But this is America in 2013, where history is whatever came in over your BlackBerry in the last 15 minutes, and in which so many of our interactions with each other are merely the result of electronic impulses that most of us understand approximately as well as the Neanderthals understood lightning. So Tiger and I collided back in 1997, and people thought that made me some kind of an expert. I told those folks what I’ve told them all along — that the one thing I was sure about concerning Tiger Woods was that nobody was an authority on Tiger Woods, possibly including himself.

Do I root for him, they ask.

Do I root against him, they also ask.

And I tell them I root for the story, in this case, my story, which was not all about dirty jokes and unpleasant speculation about relative penis size — look it up — but, rather, about what I thought I had been watching on the golf course. In my life, I had seen only three other athletes — Bobby Orr, Pedro Martinez, and Michael Jordan — do what Woods could do, which was not only to overwhelm the competition, but to overwhelm the sport itself, treat it like a personal plaything, change the paradigm of excellence forever, and adjust to one’s own talents the parameters of the possible. (Jim Brown came very close to doing it, too, but football’s parameters are far more rigid.) At his best, which was during the immediate aftermath of our brief encounter, Tiger Woods changed what being the best golfer in the world meant. In doing so, he changed what being an excellent golfer meant, changed what being a good golfer meant, changed what being an average golfer meant, and on and on down the line. I thought the time in which he was doing this might turn out to be shorter than he hoped; I always wondered about the long-term effect on his back of the mighty torque of his swing. But I thought that, whatever the new parameters of excellence he created, he would be at their center for as long as he played. I turned out to be wrong.

He’s won four tournaments this year, all of them notable only for the quality of their courtesy cars. He has won 14 major championships in a career that began as though he’d pass Jack Nicklaus’s lofty record of 18 majors leaving nothing behind but a vapor trail. Instead, he’s stalled, and he’s become just another name on just another leaderboard. In July, he’ll go to Muirfield and try to win the British Open, and there are about a dozen other golfers who seem to be better bets than he is.

Had I seen him play at Merion this weekend, had I turned on the television early enough to see him, apparently I would have seen him dub a chip shot so badly that it ended up behind him, and I would have seen him putt as though his caddy had handed him a gravel rake. And even then, he didn’t flame out spectacularly. He duffed and scratched and grumbled his way around the course, picked up his low-place money, and moved on. Perhaps he’s thinking about Muirfield next month. He keeps saying he’s in it for the winning, for the majors, and not for the money he can make by still being Tiger Woods, but I have to believe — and I am no authority — that an ongoing brush with simple mediocrity must be killing him worse than being terrible ever would. Yes, he was leading the Tour a couple of weeks back. But because he is Tiger Woods, and because of what being Tiger Woods used to mean, “leading the Tour” is something akin to a participation ribbon. He’s on the verge of signing a massive new endorsement deal with Nike, and Nike did not hand out that deal for somebody who is “leading the Tour.” Nike hands those deals out to legends, or to people who Nike’s formidable mythmaking machinery can turn into legends. That is still the larger course on which Tiger Woods plays his game. That is the course on which he was trained, by a man now fairly long dead.

Very well, madam, it is no matter. I merely wanted to leave that sack in his care, to be delivered to the rightful owner when he shall be found. I am a stranger; he does not know me; I am merely passing through the town to-night to discharge a matter which has been long in my mind. My errand is now completed, and I go pleased and a little proud, and you will never see me again. There is a paper attached to the sack which will explain everything. Good-night, madam.

In the course of reporting the story in question, I came to like Earl Woods. He was old, then, and his heart was giving him all kinds of trouble, and he was very cranky. But, to me, he was The Passing Stranger, who arrived in the Hadleyburg of the PGA not with a sack of gold, but with his son, who could be the greatest who ever played the game. And then, when he realized that there really was nothing more he could do as far as the game itself went, Earl withdrew to a series of interviews calculated (in his mind, anyway) to create out of his son, the great golfer, a world-historical figure. Some people bought it. The PGA bought it. Nike ate it up with a spoon. Earl was thrilled. He’d gotten over on them all, he had. I thought it was the most incredible pile of public hokum since Charles Ponzi was working his scheme.

It was at the end of his work when we spoke. In his words, he had “pushed the boat away from shore.” This was a gentler metaphor than suited what actually was going on. Members of Tiger’s immediate entourage had taken to badmouthing Earl with impunity. Tiger had begun taking control of his own empire, and hiring his own people to run it. For the first time since he’d put a golf club in his toddler son’s hands, Earl was a spectator in his son’s life. He claimed it didn’t bother him, that he was old and he was sick and he was tired, and that it was time for him to step back anyway. But he said it with blue grace notes surrounding every syllable. He was handing his sack of gold over to a very corruptible town. He knew, I think, what could happen to it there. He did not appear to be a man with very many illusions about the basic corruptibility of the human condition. I thought about him Sunday, Father’s Day, and I wondered what he would make of what had happened since he dropped his treasure off in town. I wondered how he would have handled the ordinary. I suspect he would not have liked it very much, but I suspect it would not have surprised him. In the end, I suspect, not very much ever did.

It is said now that Tiger Woods is in a “drought” concerning the major championships. In itself, this is a measure of what he has come to mean within the sport. Most players spend their entire careers in a “drought” concerning the major championships. In fact, the great majority of the players on the PGA Tour spend their professional lives in the Gobi Desert as regards the major championships. And there are the individual “droughts” as well — Mickelson and the Open, Arnold Palmer and the PGA, of all things. Tiger’s “drought” consists of the fact that he has now gone five years without winning a major. That is a drought by the standards he set for himself. Meanwhile, he was “leading the Tour” a couple of weeks ago, and Nike is still going to enable him to buy a small planet if he so desires. A drought is a relative thing in a career.

I no longer know what to make of him. I think age has caught up with him. I think the circus came to town in his life at exactly the wrong time in his professional career, which was just as age was catching up to him and he otherwise would have been able to concentrate on making the adjustments that you make in those circumstances. I don’t think he’s made up for that lost time. What I do know is that we collided at what was the beginning of one of the most epochal changes a single athlete ever made in his individual sport. What I do know is that at the heart of that event was a human mystery that we never may solve, which is the case with most human mysteries, in or out of the spotlight. Now, as he prepares for Muirfield, and another shot at another major, which is really the only thing he has left for which to play, the mystery is deeper and more abiding, and I am more sure than I ever was that nobody, least of all me, ever was an authority on Tiger Woods, not even Tiger himself.