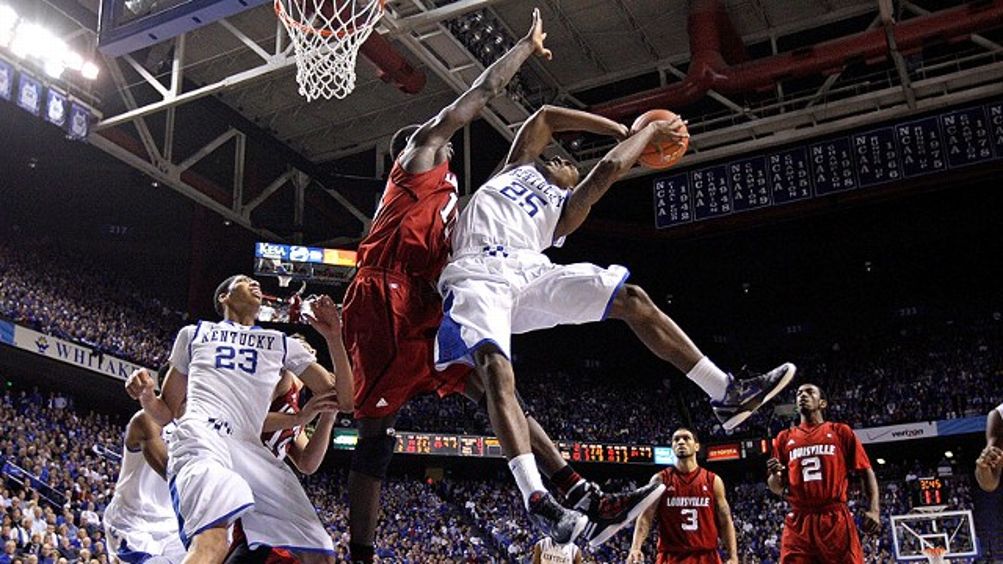 Last October, while walking among the faithful camped out to see his University of Kentucky basketball team practice, John Calipari denied the existence of Louisville. Three times, he denied it.

“It’s a unique thing,” the coach told a television interviewer. “There’s no other state, none, that’s as connected to their basketball program as this one. Because those other states have other programs. Michigan has Michigan State, California has UCLA, North Carolina has Duke. It’s Kentucky throughout this whole state, and that’s what makes us unique.”

Eighty miles west, at the University of Louisville, Rick Pitino heard those words. “Four things I’ve learned in my 59 years about people,” he said. “I ignore the jealous, I ignore the malicious, I ignore the ignorant, and I ignore the paranoid. If the shoe fits anyone, wear it.”

Ah, kings at each other’s throats — flawed, driven, prideful men scheming for power and empire. Theirs is a tale replete with willful violations of rules legal, moral, and ethical. Ghosts move in the shadows. Blood is on everyone’s hands. How delicious that all this is told inside a basketball game this weekend in New Orleans — Kentucky against Louisville, Calipari against Pitino.

Someone should get press credentials for W. Shakespeare.

Curtis is a lawyer, but we forgive his sins because he is, first, a college basketball fan. Seven years in college, four terms as a prosecutor, and three decades of law practice have been time killers between games. He travels with a University of Kentucky-branded suitcase that announces his willingness to participate in a Big Blue worship service at any baggage carousel.

“You don’t want Shakespeare,” he says. “Coach Cal and Ricky are out of Mario Puzo. It’s Godfather, the basketball edition. Really. They’re the Corleones. They’ll kiss each other on the cheek in New Orleans because, as the don might say, ‘Keep your friends close, keep your enemies closer.’ Cal beat Indiana. Now he has to beat Louisville. That would settle all the ‘family business.'”

“As bad as it has always been between them, it’s worse now,” says Louisville columnist Billy Reed. “It’s bigger, crazier, more vicious.”

“People down here think LSU-Alabama football, with Nick Saban switching sides, is as big as it gets,” says Jeff Marx, once a newspaper reporter in Kentucky who now lives in Baton Rouge. “They just don’t believe me when I say Kentucky basketball is LSU-Alabama football on steroids.”

“If Kentucky loses to Louisville, after pointing to this year as the year, and on top of that losing to Pitino, that would be cataclysmic,” says Ken Howlett, editor of a UK blog, A Sea of Blue.

These are classic college programs. Each sells more than 20,000 tickets a game. They are the NCAA’s two richest basketball moneymakers. Kentucky has won seven national championships, Louisville, two. Kentucky has been in 15 Final Fours, Louisville, nine. This is Calipari’s best team. It is quick, fast, strong, long, and can terminate with extreme prejudice at either end of the court. Pitino’s team, early on, was a mess. In December, it lost at Kentucky, 69-62. But he now has the Cardinals on an inspired, unexpected, winning-ugly streak built on relentless defensive efforts that have befuddled high-rev offenses.

To most Americans who don’t care which team wins, the game will be entertainment enough. But to Kentuckians who care mightily about which team wins, this is not Shakespeare or Puzo. This is biblical. It’s Armageddon, only more serious.

In the dreams, he wakes up to take a leak.

“Standing at the urinal beside me — every time, every dream — there’s Doron Lamb.”

Kentucky cognoscenti know Doron Lamb as a major figure in the constellation of stars gathered by Coach Cal. Telling the story, the lawyer sighs and says, “I’m about nerved out.”

He’s not alone. A Kentucky fan hooked up to a dialysis machine got punched the other day by a Louisville fan who, waiting for treatment, declared that his Cardinals were going to whup ’em some ass Saturday. The Kentucky fan flipped off the guy. That’s when the discussion turned physical. Police in the mid-state city of Georgetown responded to the dialysis duel. Détente was achieved before handcuffs were necessary.

The beautiful stretch of I-64 that separates the universities is the least of their differences. Calipari was mean-spirited in erasing Louisville from the map. (He suffers from “Pitino envy,” Louisville Courier-Journal columnist Rick Bozich wrote.) Still, it’s true that many Kentuckians think of the state’s biggest city as something apart from them, as if it’s not really in the commonwealth but on the far side of the Ohio River, adrift in nowhere Indiana. Mike Rutherford, a blogger at Card Chronicle covering U of L athletics, has written: “Kentuckians outside of Louisville view the Derby City the same way someone from upstate Vermont views New York City: prostitutes parading around the KFC Yum! Center, muggers behind the doors of every store in the local mall and gang-bangers residing in each and every high-rent neighborhood home.” (My man Curtis calls the KFC Yum! Center the Chicken Dome.)

It’s a clash of cultures. Kentucky represents the old south, Louisville the new — though they’re certainly more alike than they’d ever admit. Listen. You’ll hear the “Quickie Ricky” jibes, born of Pitino’s admitted 15-second tryst in 2003 with a woman convicted in 2010 of trying to extort millions from him. You’ll hear Calipari called “Coach Vacated” in allusion to his two previous Final Four appearances being erased by the NCAA cops. His astonishing feats of recruiting are also a source of Louisville animus. Two years ago, five UK players were first-round NBA draft choices (three were freshmen). This time, it may be four (including one recruited for three years by Pitino, only to be whisked away by Calipari). Many of the one-and-doners have had connections to an ubiquitous Calipari confidant named William Wesley, a.k.a. “Worldwide Wes.” No one has publicly accused the man of undisguised sleaze, but Yahoo! Sports’s Pat Forde, once a Louisville columnist, says, “He drives the U of L people crazy.” So much so that one Louisville official calls Saturday’s game “David-versus-Goliath, good-versus-evil, students-versus-mercenaries.”

What, then, to expect on Bourbon Street the night before the game when Kentucky’s people bump up against Louisville’s?

“It’s uncharted territory,” the blogger Rutherford said. “But the Final Four is the biggest stage. And these are people who don’t like each other. New Orleans, Bourbon Street, alcohol for a full day — it’s a recipe for disaster. It could be bad. Everybody better keep their heads on a swivel.”

Is that journalistic hyperbole?

Precedent suggests caution. On October 27, 1985, UK’s hometown newspaper, the Lexington Herald-Leader, published a story reporting that Kentucky players had taken boosters’ money in violation of NCAA rules. Jeff Marx and Mike York found 26 former players who admitted accepting “$100 handshakes” and as much as $1,000 in exchange for the players’ free game tickets.

All hell broke loose. Marx says the Herald-Leader editor, John Carroll, “called it ‘the strangest, most violent reaction’ to any story he’d ever experienced.” A bomb threat. Death threats. Bullet holes through the newspaper building’s windows.

For a dozen years, I wrote newspaper columns in Louisville. To understand basketball’s place in the state, I drove in circles around Kentucky. If I saw a coat hanger twisted into a hoop and nailed to a clothesline pole, I’d write it. See a kid bouncing a ball down a dirt road, that’s a column. Drive along KY-7 in Letcher County and see a rawboned guy on the porch of his general store, I’d say howdy. Turned out to be Joe Begley. Played on a Maytown High team that made it to the state tournament in the 1930s. He’d become an angry opponent of the strip mining for coal that denuded the state’s mighty mountains. Called SOB’s what they were, SOB’s. I asked him what he thought of basketball in
Kentucky. “If a lump of coal ain’t Jesus Christ,” he said, “basketball is.” Column.

Adolph Rupp made it so. He was a tall, slender 29-year-old high school basketball and wrestling coach in Freeport, Illinois, when he made a long train ride to interview for the vacant basketball job at Kentucky. It was 1930. He wasn’t sure he wanted the job. In 1974, on one of my circlings, he told me, “Bear in mind that where Memorial Coliseum now stands, there were 55 little Negro one- and two-room shacks.” (“Negro” was a step up from the “Colored Notes” that ran on the back page of the Herald-Leader in the mid-1960s.) Down from Illinois, Rupp had checked in to the Lexington YMCA. “I had a room that wasn’t fit for a cat. I said, ‘Good gawd almighty, what kind of place is this Kentucky?'”

It became his Kentucky. His first team won its first game, 67-19, breaking the university scoring record. Rupp would lead UK to national championships in 1948, ’49, ’51, and ’58. Kentucky was then, and remains so today in many places, a poor, rural state. In its Appalachian mountains, communities long have been victimized and exploited, primarily by corporations bulldozing hillsides to expose and extract the region’s richest resource, coal. Left behind were slag piles at the bottoms of mountains stripped bare. More often than anyone wanted, Kentucky’s basketball success became the natives’ only source of pride.

“It was part of people’s souls,” says Carroll, the former Lexington editor. “When the Cats were going well, their lives were enhanced. But if they lost, or got caught cheating, it was a dagger to their hearts.”

Pat Forde introduced me to a woman who knows all that. Jackie Kelly is a grandmother, 76 years old. She grew up in the eastern Kentucky mountains early in Rupp’s run. “We lived up the last holler outside Carr, Kentucky,” she says. “I was born a Kentucky fan.” Her father, Lawrence Watts, was a district politician and grocery store owner. The family listened to UK games on a Silvertone tabletop radio, bought out of the Sears Roebuck catalogue. “We didn’t have electricity until I was 15,” Mrs. Kelly says. “So it was a battery radio, and when you went through the room, if the battery was low, you couldn’t speak, you couldn’t make any noise, because Daddy had to press his ear up against the radio to hear. I shouldn’t say this, but in that time Adolph Rupp was, almost, God.”

Mrs. Kelly’s devotion to Kentucky basketball was tested in the early 1990s when the free-spending Wildcats were buried under NCAA sanctions. She stuck with them and was rewarded with the work of Rick Pitino, who raised UK from shame to a national championship in 1996. “I loved him,” she says, and she didn’t complain much when he left for the Boston Celtics and a $70 million contract. But when he failed there and came back to college coaching, he returned not to the Cats but to that satanic presence on the Ohio River, the U of L. She told Forde, “I hope he loses every game, I hope his horses (he’d bought into a stable) lose every race, and I hope his house is haunted.”

Today Mrs. Kelly lives in Louisville. She keeps a basketball signed by Pitino and given to her on her 40th wedding anniversary. But the Pitino she adored is gone. How could he cross over to the enemy? There was also that woman thing.

And now comes Pitino against Kentucky.

“I’m too nervous. I’ll disappear. I’ll go to a hiding place. I’ll dust or I’ll iron. That Rick Pitino can coach. He may come up with something that gets us out of our way of playing.”

“I may wind up hiding under the bed.”

Then, almost whispering, as if afraid Daddy or Rupp might hear, she said, “And if we lose, I might stay there.”

@DaveKindred is the author of Basketball: The Dream Game in Kentucky.