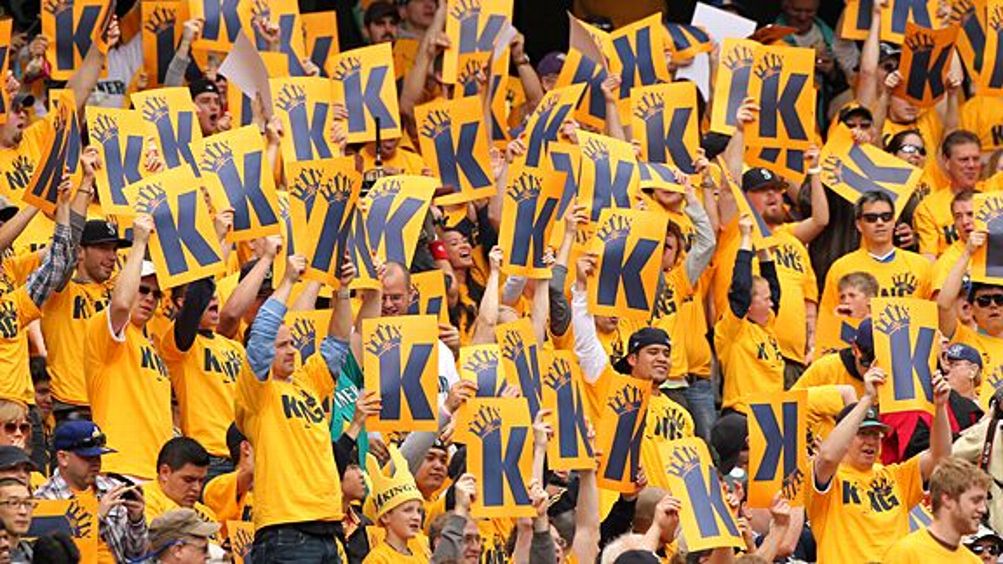 So there’s a guy in a jester outfit, juggling. And a quartet of teenagers wearing homemade crowns. And a senior citizen munching on a giant turkey leg. Clouds of smoke from a nearby grill invade your nose with the smell of cooking meat. And somehow we’re not at a Renaissance Faire.

Nay, good sire (or madam), we’re sitting behind the left-field foul pole at Safeco Field. That’s Section 150 — or as it’s known on days that Seattle Mariners pitcher “King Felix” Hernandez starts, “The King’s Court.” Pay $30 and you get a free “King” T-shirt, a large piece of yellow card stock with a blue “K” printed on it, and a seat that’s regularly $40 (also, regularly empty).

This is the fifth King’s Court, and it seems as though the Mariners have a phenomenon on their hands. Attendance in the section has reached as high as 1,000 in an area that usually hosts only a handful of patrons. The franchise did two things right when it created The King’s Court. First, it featured Hernandez. Mariner fans adore the homegrown star, who debuted with Seattle six seasons ago at age 19. “There was this community surrounding Felix already,” says Mariners marketing director Gregg Greene, “and we wanted bring it into the park and make sure it was an event when he started at Safeco.” The second thing was to give away a bright, mustard-yellow tee to every fan in the section. The shirts, which read “King” with an image of Hernandez in mid-delivery forming the letter “I,” are a striking visual when donned by 200 tightly packed Seattleites.

The jester gives his name as “Thudge Ester,” his age as 42, and his occupation as “mostly just being an awesome jester.” Every cheering section needs a leader, and “Thudge” is ours.

Ten seasons removed from their last playoff appearance, the Mariners are suffering their worst attendance since 1995, when Alex Rodriguez was a teenage prospect fighting Felix Fermin for playing time. All 11 of the smallest crowds in Safeco Field history have come this season. From the outside, The King’s Court looks like a savvy way to fill otherwise vacant seats. True, but it’s also more than that. For the crowd of freaks and geeks around me, it’s a solid excuse to dress up and chant in public. For the rest of the stadium and the TV audience, it adds energy to an unremarkable Wednesday afternoon game. And, for the marketing department of a struggling franchise, it may be the topic of next week’s staff meeting.

The Los Angeles Dodgers tried something similar two years ago. Beginning April 30, 2009, you could pay $99 and get two seats in “Mannywood,” near Manny Ramirez in left field. Eight days later, Manny got his 50-game steroid suspension. Eschewing the notion of renaming the section “Juan Pierre Plaza,” the Dodgers shut down the promotion. When Manny returned, so did Mannywood. “The Dodgers spent $45 million on Manny Ramirez,” says Ken Levine, who hosted Dodger Talk on L.A.’s KABC-AM that season. “They probably figured, ‘What can we do to maximize our investment?’ They were selling dreadlocks, they were selling T-shirts; it was much more of a marketing ploy.” Though, he admits, Mannywood had its moments: “There was that magical game where Ramirez came on as a pinch hitter against Cincinnati and hit a grand slam into Mannywood. That was unbelievable. I guess to have the same thing in Seattle someone would have to strike out and their bat fly down the left-field line into the stands.”

Inside The King’s Court, we’re hoisting our yellow “K” cards for the game’s first at-bat. Hernandez just threw a 92 mph fastball past Atlanta Braves’ leadoff hitter Jordan Schafer. It’s strike 2, our cue to stand and deploy those cards. The guy in the jester suit begins a chant: “K! K! K! K!” We join in, and Felix breaks off a nasty 82 mph curveball that drops under Schafer’s swing. We know what to do: Thrust our signs higher, high-five a stranger, maybe venture a “yeah!” or “all right!”

Hernandez struck out two of the first three batters and faces Braves first baseman Freddie Freeman at the top of the second. Felix is quickly ahead 1-2. This time, instead of chanting “K!” during Felix’s windup, we let loose with a collective, sustained yell, like you might hear at a football game on third-and-short. Let’s call it “OOAOOOHHHH!” Felix fires a 94 mph fastball. Freeman fouls the pitch off.

Freeman lays off a slider that bounces at his feet.

Freeman fouls a changeup into the stands near third base.

A Hernandez curve sails just over and outside the strike zone. This at-bat is testing our patience.

Hernandez throws another curve, which Freeman lines into left for a single. It’s a letdown, but the festivities resume in time for Hernandez to lure Dan Uggla, the next batter, into chasing a slider and popping out.

Attending a sporting event is an increasingly sterile experience. Gone are the cigar-smoke scented stands of the 1930s, the pot-smoke scented stands of the 1970s. Smells of any kind are rare, really. Meanwhile, the body’s other senses endure a barrage of choreographed introductions, between-innings videos, and between-pitch exhortations. The Safeco Field scoreboard often displays a desperate one-word plea: “Noise!” Choreography requires cues and stage managers and rehearsals and replication. And that’s just plain bizarre, when you think about it, because the best thing about sports is their inherent unpredictability.

Chaos, not predictability, reigns in The King’s Court. Costumes. Everywhere. The jester gives his name as “Thudge Ester,” his age as 42, and his occupation as “mostly just being an awesome jester.” Every cheering section needs a leader, and “Thudge” is ours. “It started as a goof,” he says, “but then I was like, ‘Hey, this is fun!'” Next to him is a guy in a full-length, faux-fur robe and crown. Two Nintendo employees showed up with thick mustaches, an homage to Mariners manager Eric Wedge and his luxuriant Fu Manchu. One large, heavily bearded fellow — if I had to guess, a former Allman Brothers roadie — sports a Seattle no. 55 Kenny Powers replica jersey from HBO’s Eastbound and Down.

There’s also a reason for the seemingly inexplicable popularity of black-rimmed glasses and mutton-chop sideburns. The costume is an homage to “Larry Bernandez,” a Hernandez-in-disguise character introduced this spring in a legitimately funny Mariners commercial. “Bernandez” has become a cult figure, a squirt of lighter fluid on Seattle fans’ fire for their King.

One such “Larry” is a fellow in his 60s who really committed to the role, buying an authentic Bernandez jersey. During each Hernandez start, the Mariners choose the King’s Court member with the best costume, and today Bernandez takes the prize — an oversized turkey leg.

It’s not a prize-winning day for last year’s Cy Young Award winner. After recording six strikeouts in the first three innings, King Felix has lost dominion over his curveball. Braves hitters are waiting for straighter pitches and slashing them into the outfield for base hits. Four runs are in, and, as usual, Felix is getting no support from the Mariners’ anemic lineup.

Across the street from Hernandez and Safeco Field is CenturyLink Field (known until last month as Qwest Field), home of the NFL Seahawks and MLS Sounders. MLS may be an afterthought elsewhere, but in Seattle it’s the toughest ticket of the summer. The Sounders drew 36,212 fans to a game against the New England Revolution two Sundays ago. The Mariners played later that night to a crowd of 10,925. The Sounders aren’t an elite team. They don’t have an aging European star to boost attendance. What they do have is the Emerald City Supporters, 1,400 fans who gather behind the stadium’s south goal, standing and jumping, clapping and chanting, for all 90 minutes of every Sounders game. The Supporters’ energy makes Sounders games like no other sporting event in town. Mariners games had that electricity in the late 1990s, when standing in anticipation of a strikeout was a Kingdome-wide imperative, not just a wacky stunt in one corner of the ballpark. The Mariners need to bring back that excitement, even if it means discounting tickets. “We definitely are going to have The King’s Court for the rest of the season,” says Greene. “And hopefully as long as Felix is pitching here.”

Our King doesn’t have his best stuff against the Braves, but he’s battled valiantly. It’s the eighth inning and he’s still stuck on those six Ks. He’s close to getting no. 7 now, even though he’s about to throw his 120th pitch. Hernandez and Nate McLouth are locked in a 2-2 count, and the “K!” chant begins again. Four foul balls later, we’re still urging Felix on. A yell comes from the crowd: “Finish strong!” But Felix can’t. On the 12th pitch of the at-bat, McLouth watches a changeup burrow into the Safeco dirt. Ball 4. Hernandez is done. Not a stellar start, but he kept the Mariners in the game. The King’s Court stands and claps as Felix trudges to the M’s dugout. Atlanta wins, 5-3.

Why go to a live sporting event? Ticket prices push regular fans farther and farther from the action — for the $1,358.90 price of a ticket behind the Yankee dugout, you could buy an HDTV, pay for six months of cable, and stock your fridge with beer. People go to a game to share the thrill of sports with thousands of fellow fans. Modern stadiums have stripped some of that community away. They segregate the crowd by income bracket and funnel spectators toward in-house restaurants, arcades, and hotels, as if the game itself isn’t worth their attention. Cheering sections like The King’s Court bring some unpredictability back to the ballpark. And that’s, after all, why we’re there.