The Frustrating Unlikeability of Treme 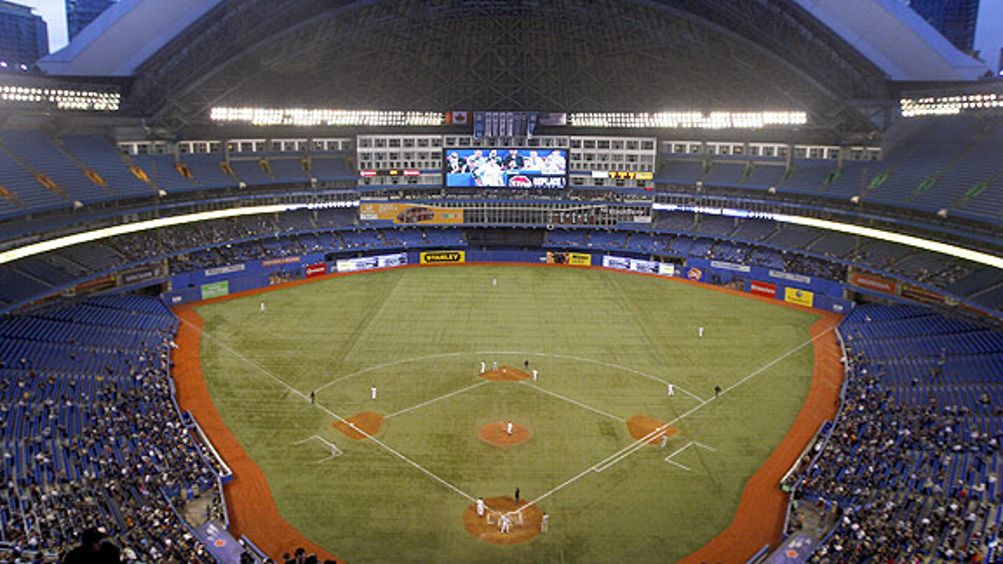 On Canada Day — otherwise known as tomorrow to the rest of the world — the Toronto Blue Jays will catch a glimpse of their past and what they hope will be their future.

With both the holiday and the Philadelphia Phillies in town, the Rogers Centre will finally be close to full again; there’s a street festival planned for before the game, making for a nice change from the usual surrounding glass-tower chill; emergent ace Ricky Romero will be on the mound, and Jose Bautista will continue his transformation from cast-off to hero.

For an afternoon, at least, Toronto will look the way it should always look: like one of baseball’s brightest lights.

On June 29, though, it looked like its more usual something else. With the Jays hosting the Pittsburgh Pirates in front of a little more than 15,000 fans, they played loud clips of past glories to try to rally the quiet crowd, and people turned their heads sideways at the strange noises, the way a dog does when it thinks it’s hearing something vaguely familiar. Even people who were in these same blue plastic seats when everything good was happening can’t quite believe it actually did.

“You can tell that baseball isn’t a very popular sport here, but it’s better than it was in Montreal,” said Jon Rauch, Toronto’s towering reliever and one of the fortunate few to have played for both of Canada’s major league teams. “My lasting memory of Montreal is our last game there, when they were throwing golf balls and beer bottles and batteries at the guys on the field. This isn’t Montreal.”

Still, people who don’t know any better — Americans, we call them — have sometimes called for the Jays to follow the sabotaged Expos into oblivion, asking to strip Canada of its last remaining baseball. They’ll cite middling on-field performance, poor attendance, Baltimore’s Adam Jones repeatedly being detained at customs for reasons that remain unclear, high taxes, bilingualism, and the immortal Matt Stairs and his obvious sorcery.

(They aren’t wrong, exactly. Matt Stairs is 43 years old, a career .263 hitter, and somehow playing for his 13th team. Witchcraft is the only explanation.)

And the Blue Jays, once again occupying their customary fourth-place spot in the American League East, are on pace for only slightly better attendance than they endured last season, when they finished 26th, nestled between the Kansas City Royals and the Pirates. They haven’t drawn this poorly since 1982, when they played over at Exhibition Stadium, and the ice-cold metal bleachers sometimes made the seventh inning stretch a physical impossibility.

“Wins,” manager John Farrell said when he was asked if he had any idea what might help his team rescue itself — what it will take to make every day seem like Canada Day. “I think we all share the common view that this is a sleeping giant.”

Somehow, the idea that Toronto is a small-market team has settled into baseball’s collective consciousness; forever looking up at the New York Yankees and the Boston Red Sox probably has something to do with it.

The truth is, Toronto, the city, is the fourth largest in the majors, after only New York, Los Angeles, and Chicago. More than five million people live in the surrounding area. The ownership — Rogers, an enormous multibillion-dollar communications and media company — has virtually limitless resources, as well as a national sports TV network, a string of radio stations, and a soon-to-be-launched national sports magazine. Rogers Centre — which the company bought for the bargain price of $25 million in 2004 — isn’t a beautiful ballpark, but it’s clean and safe and accessible. Even the Canadian dollar, which was once the ready excuse for every struggling sports franchise up here, has eclipsed its American cousin. The Jays can knock off three percent from every contract, right off the top.

But there they were last night against the Pirates, playing in a stadium not even one-third full, 23rd in payroll, and still struggling to reach the .500 mark, let alone thinking about making a run at the postseason.

Jon Rauch might not remember, but it wasn’t always this way. It’s been a little more than 20 years since Toronto and baseball began one of the game’s great love affairs — since there was a kind of perfect chemistry between this city and its team.

In 1989, what was then called SkyDome opened to great fanfare. (Alan Thicke hosted! Glass Tiger played!) People came to see this engineering marvel with its retractable roof and the world’s largest JumboTron as much as they came to see the baseball, but happily, the baseball was also very, very good.

Starting that year, the Blue Jays won the American League East four out of five seasons, going on to win back-to-back World Series in 1992 and 1993. They became the first major league team to draw four million fans, which they did for three years running. Big-name players — Paul Molitor, Dave Winfield, Rickey Henderson — wanted to come here, because they knew they would win, and they knew they would get paid. (During their championship seasons, when they were bankrolled by the brewing titan Labatt, the Blue Jays had the biggest payroll in baseball.) There were parades and fireworks and wild celebrations. For a brief window of time, it seemed as though the success would never end.

It ended remarkably quickly. Most critically — never mind the strike or the stadium or the dollar — the team just wasn’t good again, not even when Matt Stairs brought his broomstick to town. The postseason has become something that only other cities do. Since 1993, the Jays have finished no better than third in the AL East, with the exception of a single second-place finish in 2006; even then, they were 10 games back of the Yankees. Their best post-World Series record — 88-74 in 1998 — still saw them 26 games out of first, and four games short of the wild card.

No matter what city (or country) you’re in, it’s hard to get excited about a summer that will end only in another meaningless fall.

There’s been talk of realignment as a way to save the Blue Jays. (There’s also been talk of creating a super division, including the Yankees, Red Sox, Philadelphia Phillies, New York Mets, and the Jays… That division would be fun, at least for those perverts who enjoy watching good people suffer needlessly.)

But nobody here wants out of the AL East.

“I don’t think realignment is the answer,” Farrell said.

“Tampa Bay’s made the playoffs, haven’t they?” Rauch said.

“What? So we could just play them later?” Adam Lind said.

Instead, they’re hoping to repeat what happened here —they’re hoping for a second stretch of magic, a different kind of perfect storm.

General manager Alex Anthopoulos has embarked on an ambitious plan, a kind of hybrid between Tampa Bay’s self-sustaining architecture and the free spending of the Yankees and Red Sox.

He’s built the biggest scouting staff in the game. He’s signing more international players. He’s focusing intensely on the draft, especially pitchers. He’s in the process of building a core of smart, quality players — with Lind and Bautista at the heart of it — and then, as they mature, and build toward something better, and the fans start to return, Rogers has promised that the money will come rushing in, that a payroll north of $100 million is a distinct possibility, and the finishing pieces can be added, right on time like a train.

In dreams, all of this happens at once, and Toronto’s on top once again.

“I think you’ll see a difference when we’re playing big games in September,” Lind said. “It’ll take a playoff run — maybe two, to really fill this place back up. But at least we already know that if we do that, the people will come. We’re not far away. We just need to win a few more one-run games, and we’ll be right there.”

Maybe that’s how it starts. Maybe it starts with one-run games like last night’s, when the Blue Jays beat the Pirates, 2-1, on the strength of young pitcher Brandon Morrow and his potentially electric stuff, and the bat of even younger outfielder Eric Thames, who hit his first career home run and rounded the bases at near-record speed.

The fans stood on their feet to watch him, and they were loud about it, too. Earlier in the night, the canned memories of greatness might not have lit them up. But the promise of it did.