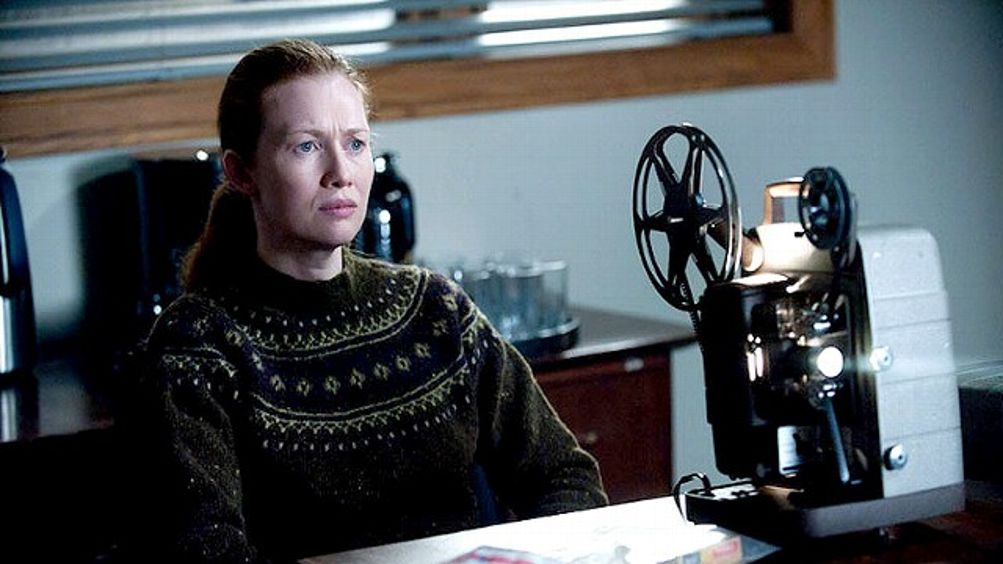 Over the 26 accumulated hours of its benighted existence, AMC’s The Killing established an impressive baseline of ignorance on a great number of topics, among them police work, mobile phones, newspapers, adultery, spinal injuries, elections, casinos, Native American politics, moshing, eating, parenting, psychiatry, technology, butterflies, justice, simple human logic, and rain. But none of those basic, often breathtaking whiffs resonated as much as the show’s deepest and most problematic mistake: a failure to understand just what it is people want from a television show.

The Killing infamously began with a question, one postered across billboards and bus stations from the East Coast all the way to the non-Vancouver parts of Seattle: Who Killed Rosie Larsen? Plenty of pilots start with similar, serial-spawning queries, from What Really Goes On in the White House? to How Do You Survive a Zombie Apocalypse? and Why Is That Car Talking? The real problem was that showrunner Veena Sud (who adapted The Killing from the Danish series Scööby-Døø) was as unhealthily fixated on the answer as was her bland, sweater-swaddled creation Sarah Linden. Instead of being compelled to uncover the truth, though, Sud was committed to concealing it. And so around and around we went, twisting like Chubby Checker strapped to a gyroscope, as Sud spun us from one increasingly implausible suspect to another over the course of two intensely frustrating seasons. It was Bennet, the lecherous, be-dreadlocked teacher! It was Belko, the Larsens’ grubby flunky! It was Jasper, the pinchfaced boy! It was Tina, the nose-pierced girl! It was Colonel Mustard, with a flip phone in the high school sex dungeon! It was everyone and no one, and it soon became clear that the lengths to which Sud was willing to go to keep us guessing weren’t worth the effort. The Killing‘s punishing, monotonous downpour eventually washed everything away, including our interest.

I certainly didn’t come to praise Veena Sud, but I have no intention of burying her — or, you know, locking her in the trunk of a Town Car, then arranging it so that her own aunt unwittingly steers it into a lake. Now that The Killing is most likely as dead as Rosie herself — AMC has remained curiously silent since Sunday night, but the show’s anemic ratings (Season 2 averaged half the viewers of Mad Men) speak volumes — pointing out plotholes seems as petty and mean-spirited as little Tommy Larsen stomping on baby birds in the schoolyard. (Although I am still curious how 5-foot-2 Jamie managed to transport the bloody, unconscious body of a 17-year-old girl through a crowded casino without anyone noticing.) Even after the first season’s infuriating finale, I always respected her God-given (or, at least, network-mandated) right to tell her story the way she saw fit. After five years toiling in the network trenches on predictable pap like Cold Case, Sud must have been thrilled to embrace the storytelling freedoms afforded by cable. And even though there wasn’t a single recorded instance of a smile in two years of The Killing, it’s hard not to imagine her taking to AMC’s mandate for quality — or at least the phony scrim of quality she eventually embraced — like 13-year-old Tommy learning about the swingset in his new backyard. Sud’s starry-eyed quotes at the end of the first season supported this, as she likened The Killing to “a holistic journey” in The Hollywood Reporter and told an incredulous Alan Sepinwall that “we said from the very beginning this is the anti-cop cop show.”

But in her reactionary zeal to keep audiences from (her words) “walk[ing] away satisfied,” Sud alienated viewers in droves. Like Linden, Sud sacrificed everything of value in order to maintain the perfect purity of her vision. Characters we could have latched onto — like Joel Kinnaman’s Holder, a shady Slim Shady whose oddball disquisitions on intestinal health and the value of organic eggs provided The Killing with its only moments of levity and pleasure — were compromised with cheap reveals and even cheaper walk-backs. Reasonable motivations were constantly wadded up and tossed aside as thoughtlessly as a doughnut wrapper out of Linden’s car window. A decent performer like Mark Moses, a memorably pickled presence as Duck Phillips on Mad Men, was tasked with playing not a character but a Brylcreemed wind vane, a lieutenant who was either assisting or obstructing our heroes depending on the day. (By the end, Moses was so gummed up he was reduced to making faces like this instead of acting.) The constant feints and dodges reduced the potential suspects considerably, leaving us for much of the season with a rogues’ gallery of utterly forgettable Canadian repertory players, from the blustery mayor to the bionic Indian chief. (No one would have been impressed by the deviousness of Michael Ames if he had been found guilty because no one would have had the slightest clue who Michael Ames was.) Even Linden’s lumpy sweaters, once so arresting and intriguing, were ultimately pointless, a repetitive wardrobe choice in place of development.

Making us care about why Rosie was killed is, in the end, a lot harder than showing us how it happened. It’s the difference between real storytelling and soap operatics.

The irony is that a single concrete decision, even one as hackneyed and quickly abandoned as Rosie’s dark double life, would have helped matters considerably. It seems evident that Sud rejected the first season’s hints of a naughty dalliance between Rosie and Billy Campbell’s jump-shooting, soon-to-be-gutshot Darren Richmond because she felt it was something we’d seen before. Revealing Rosie to be more than a vague saint would have opened The Killing up to more of the Twin Peaks comparisons it was desperate to avoid, but here’s the thing: Twin Peaks was a good show! It may have failed due to its inability to solve the Laura Palmer murder in a satisfying way, but that’s hardly what it’s remembered for. If Sud had only taken a timeout from pelting the audience with red herrings like a vengeful fishmonger at the Pike Place Market, she might have seen that committing to a firm set of character relationships would have provided an opportunity to stop flailing around and start digging deeper. Making us care about why Rosie was killed is, in the end, a lot harder than showing us how it happened. It’s the difference between real storytelling and soap operatics and it’s also what separates legitimate detective work from the punch-drunk stumbling that Linden and Holder forced us to witness for 26 episodes.

Instead of providing even a taste of the traditional tropes that keep people invested in television — connection, depth, emotional resolution — Sud continued to pepper us with the bizarrely self-righteous blubber she mistook for insight. (And I have no patience for The Killing‘s acrobatic enablers, those willing to bend over backward to forgive even the most egregious Bockmail-induced boof. It’s not that we haters aren’t smart enough to appreciate its uniqueness, it’s that we’re observant enough not to mistake sloth for subtlety.) Shows like The Sopranos (to which Sud once catastrophically compared The Killing) and Lost (which started with a hell of a question — “Guys, where are we?” — and then spent six gloriously goofy years complicating the hell out of it) found plenty of time off from exploding convention to deliver on all the things that made Sud sniffy: romance, humor, the ability to switch cellphones to “vibrate.”

But The Killing‘s second season quickly settled into its lazy pattern of diversion and debasement, marked by miraculous healing mechanisms that made Wolverine look like a hypochondriac (Richmond is up and campaigning six days after a bullet bisects his spine; Holder is chasing down perps less than 24 hours after being beaten unconscious) and a head-scratching fuddy-duddyness (1,232 views for an election-altering video isn’t viral; it’s barely the sniffles). Sud may have thought she was revealing depth, but really she was skimming the surface of an uninteresting puddle. It was all obfuscation all the time this year, as Sud and her staff chose to drown us in the sinkhole of self-indulgent sadness and bedwetting that was the Larsen home or smother us with the sight of Billy Campbell, a once charming small-screen vet now wheeling himself around like the gaunt victim of a charisma-sucking vampire. Whole episodes were built around the spiritual peregrinations of Mitch Larsen: Runaway Laundress. A throwaway metaphor about an ornery grandfather was needlessly brought to leering, clichéd life as the cliffhanger to the penultimate hour. Has there been a showrunner in history more dedicated to presenting us with things we don’t want? Sud was like a cat proudly delivering a dead mouse to the foot of the bed, demanding a reward for bumming everybody out.

Sunday’s finale revealed the long-sought culprits to be Jamie, Richmond’s inexplicably dedicated twink aide, and Terry, the whorey-but-helpful Larsen-in-law. There was no malice to the murder. Rather, Rosie, an inscrutable cipher from the start, remained one until the end. She wasn’t merely a perfect student and daughter, she was a butterfly-loving virgin who made gauzy (and perfectly edited, though the film never left the camera) Super 8 movies that conveniently doubled as eulogies. She was, in Jasper’s poetic words, “meat Kryptonite,” yes, but Rosie was also an impossible angel who had climbed to the top of the casino in order to “say good-bye” to the water-logged city she was soon to leave. “Sometimes it all comes down to that, I guess,” Holder mused at the deeply unsatisfying conclusion. “Randomness.”

But if Sud wanted to teach us a lesson, it wasn’t one worth learning. There’s no merit badge for nihilism, no Peabody for peevishness. No matter how lofty or new-agey her goals were with The Killing, it failed on nearly all of them. Serialized storytelling is never easy. It’s a delicate dance between satisfying the audience and stringing them along. It’s necessary to play with expectation, yes, but also to not play anyone for a fool. Still, credit where credit is due: At the close, Sud did finally stumble into a rare moment of empathy when she revealed Rosie’s lone sin as being in the wrong place at the wrong time. It’s a feeling anyone who spent the last 12 Sundays tuned to AMC at 9 p.m. can surely understand.