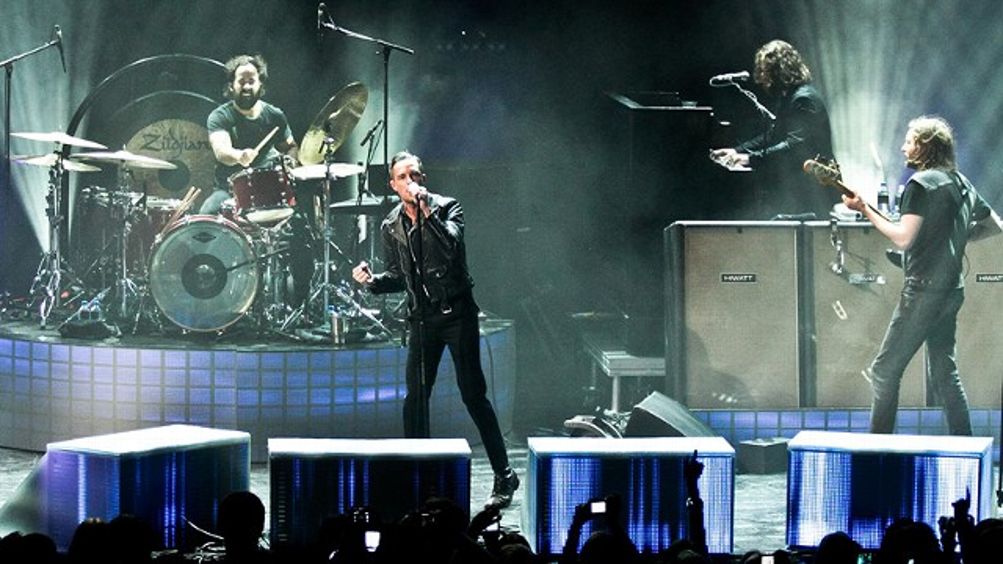 Last week, a Las Vegas rock quartet called Imagine Dragons debuted at no. 2 on the Billboard albums chart with its debut full-length, Night Visions. It was the best first-week chart showing for a rookie rock band in more than six years. If the sum total of your Imagine Dragons knowledge consists of the previous two sentences, don’t worry: You’ll probably be hearing from these guys soon enough. Night Visions is a canny (or craven) fusion (or pastiche) of two very popular (or overexposed) styles, ’90s alternative rock and anthemic, ballad-y hip-hop in the mold of Eminem and Rihanna’s “Love the Way You Lie” and Dr. Dre’s “I Need a Doctor” (both of which were produced by Alex Da Kid, who executive-produced Night Visions). Imagine Dragons’ timing couldn’t be better, as rock radio has been infiltrated lately by cotton-candy pop artists that just barely qualify as rock music — fun., Gotye, Grouplove, and AWOLNATION are among the hooky hordes that primed the pump for Night Visions‘ success.1

Then there’s The Killers, the original derivative Las Vegas quartet, whose recording studio hosted Imagine Dragons during the making of Night Visions and — more crucially — provided an early blueprint for the album’s success. In 2004, The Killers pretty much were Imagine Dragons: opportunistic, unapologetic about pursuing mass popularity, and a lot more pop than rock. The Killers’ debut record, Hot Fuss, sold 3 million copies thanks to an excellent run of canny/craven singles — highlighted by the witty sleaze of “Somebody Told Me” and the uplifting sleaze of “Mr. Brightside” — that piggybacked on the era’s trendiest rock styles, including the cokehead nostalgia of Strokes/Interpol new wave and (less faithfully) the “W is in the White House, let’s get wasted” liberation of indie dance-punk. The new Imagine Dragons single, “Amsterdam,” is practically an homage to Hot Fuss–era Killers, with its Durannie-baiting synths and Robert Smith guitar brooding and Dan Reynolds’s melodramatic, world-conquering vocal. It’s not a song you brag about liking, even if thousands of other people happen to be compulsively sneaking it onto their iPods this very moment. But it’s precisely the sort of vehicle that allows bands you’ve never heard to suddenly seem like they’re everywhere.

Night Visions isn’t in the same league as Hot Fuss, but the record’s eager crowd-pleasing and mercenary hooks reminded me of why I like The Killers more than did The Killers’ own, long-awaited Battle Born, their first album in four years. In a way, Born is a typical Killers record, in that it’s half good and half half-baked filler. The best song by a mile is the lead single, “Runaways,” a textbook example of The Killers doing “great” as well as anybody. “Runaways” is a workout mixtape of a song, with cinematic string-section swoops, a grandstanding chorus, and caterwauling rhythms on loan from Arcade Fire, Coldplay, Lady Gaga’s “The Edge of Glory,” and Bon Jovi’s “Livin’ on a Prayer.” It is to rock clichés what The Artist was to silent movies — an entertaining redux that never obscures the quotation marks around all the expertly rendered references. It’s an enjoyable tribute operating on secondhand stimuli.

The other must-downloads on Born are “Flesh and Bone,” “The Way It Was,” and “The Rising Tide,” which are good in the same way — they’re arena-rock anthems that sound like they’ve already been around for 20 years, because the spare parts of those songs truly have been around for at least that long. Battle Born falters when the less-buoyant zeppelins in the fleet prove to be too bloated to become airborne. “Deadlines and Commitments” gamely interpolates the opening bass rattle from Pink Floyd’s “Another Brick in the Wall,” but otherwise is mired in soppy pianos and draggy ponderousness. The power ballad “Here With Me” has a nice line about not wanting to see a girl’s picture on a cell phone, but otherwise sounds phoned in from Billy Joel’s late ’80s “rock” period.2

U2 has long been an obvious model for The Killers; their left-turn reinvention as ersatz cowboys out to save the world with stridently exultant radio hits on 2006’s Sam’s Town seemed as inspired by the reappropriated Americana of The Joshua Tree and Rattle and Hum as it was by Bruce Springsteen, the album’s most name-dropped influence. Battle Born, then, is The Killers’ No Line on the Horizon, the epitome of the overworked and underrealized superstar rock album. Steve Lillywhite, Brendan O’Brien, and Daniel Lanois are among the expensive producers whisked in and out of the studio during the making of Battle Born, and consequently the final result lumbers under the weight of too much tortured deliberation and flop sweat. It is a profoundly overwrought attempt at being profound.

Battle Born is not a party, it’s a war: It’s too expensive, loud in all the wrong ways, and by the end you forget the point of it all.

The Killers once were the pop laureates of late-night hookups in the back of taxicabs; now they’ve left that franchise to fun., whose monster hit “We Are Young” winks knowingly at the quarter-life crisis malaise of “Somebody Told Me.” On Battle Born, the Killers sing about supposedly more serious matters, like (on “Flesh and Bone”) being “anointed by the blood” and “flashing crimson from the fires of hell.” But it doesn’t ring nearly as true or smart as Hot Fuss, which was made by a band that knew what it wanted and seemed to have a ball getting it. Battle Born is not a party, it’s a war: It’s too expensive, loud in all the wrong ways, and by the end you forget the point of it all. 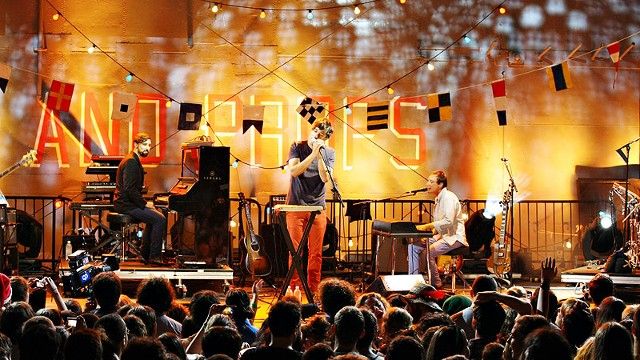 Killers drummer Ronnie Vannucci Jr. described Battle Born in Rolling Stone as the band’s “difficult fourth record,” which speaks both to the album’s prolonged birthing process and The Killers’ instinctual need to self-mythologize.3 If only Grizzly Bear had that kind of megalomaniacal moxie; the Brooklyn indie combo has just released its own difficult fourth record, Shields, and it’s just as much of a self-conscious attempt to blow people’s minds as Battle Born. Only Grizzly Bear is more shy — if not downright cagey — about its ambitions.

The Killers remain, at heart, a pop band, and therefore dedicated to providing instant gratification in the form of immediate four-minute bursts. Grizzly Bear, meanwhile, is very much an old-fashioned AOR prog-rock group. Half of Shields‘ 10 songs run longer than five minutes, and even the shorter numbers — like the epic opener, “Sleeping Ute,” which unexpectedly sounds like a quite alert Ute — are hardly punchy; they’re monocle-rattling mini-suites constructed of obtuse movements that only make sense when heard as pieces of a larger whole. Grizzly Bear’s 2009 breakout, Veckatimest — which landed in the Billboard top 10 and spawned the sorta-hit “Two Weeks” — also had its share of arm’s-length moments, but now this band is actively going out of its way to not be immediate or even all that engaging. Shields is the sort of chilly musical story-problem Radiohead has made a career out of releasing every four years. It demands to be solved before it can be loved.

Not that Shields is purely an intellectual exercise. For the first time in Grizzly Bear’s recording career — even more than on Veckatimest, which ranks among a small handful of true classics to come out of contemporary indie rock in the last decade — it sounds like a real rock band. The heft of the heavy-riffing “Sleeping Ute” and propulsive sweep of “A Simple Answer” and the fantastic “Speak in Rounds” show that Grizzly Bear is, at heart, a hard-touring group whose live show is as powerful as any band in its genre.

It’s fitting that Shields is also structured like a live concert; the catchiest songs are front-loaded, but the record’s pièces de résistance are the final four tracks — or Side 2, in the parlance of Grizzly Bear’s album-centric, magnum opus milieu — which don’t so much flow together as provide the appropriate dynamics required for a slow-motion (though ultimately potent) payoff. The sequence begins with “What’s Wrong,” which crossbreeds The Beach Boys’ Smile, Radiohead’s Kid A, and movie-soundtrack ambient jazz for several long, meandering minutes. Then comes “Gun-Shy,” a slinky slab of psychedelic R&B with a characteristically sensual vocal from Grizzly Bear’s best singer, Edward Droste. (All four members of Grizzly Bear sing about as well as anyone in indie rock, which is like being the funniest episode of Go On, but still.) Up next is “Half Gate,” a spotlight for quietly virtuosic drummer Christopher Bear, who guides the tumultuous track from pretty serenity to a breathtakingly violent denouement. Finally, Shields ends with “Sun in Your Eyes,” a bombastically symphonic ballad with a warm, piano-based melody that pulls you in as strongly as the chorus begs for isolation. “I’m never coming back,” guitarist Daniel Rossen sings, just in case you didn’t get how Grizzly Bear’s defensive persona relates to the album’s titular metaphor.

Shields makes you work to uncover the pleasures of its intricate, fussy, sometimes frustrating, and frequently awe-inspiring music. It might be too much work at times; Shields eventually offers rich rewards for patient listeners, though it made me wish for a happy medium between Grizzly Bear’s challenging sonic puzzles and the constant, grander-than-thou hectoring of Battle Born. In the space between great and “great” is a certain something both of these laborious wannabe-masterpieces are missing, no matter their other merits: fun.

Filed Under: Music, The Killers