The Tao of Gronk 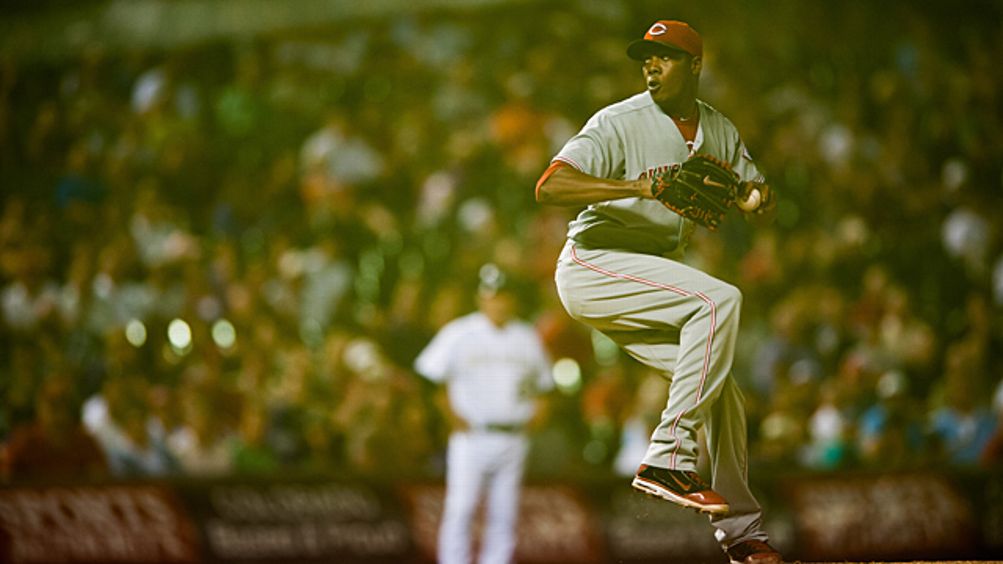 On a Friday afternoon in Miami, Cincinnati Reds pitcher Aroldis Chapman, whose bursts of speed have been known to bedevil both batters and suburban police officers, is running late. Standing in the visitors’ dugout at Marlins Park and glancing at his watch, a Reds PR manager tells the assembled media the star reliever’s 4 p.m. press conference will be pushed back 20 minutes, right after Chapman completes a throwing session in the outfield — a session for which the reliever has yet to appear. The PR guy doesn’t seem happy about the delay. “Latin time,” chirps an Anglo beat writer in this otherwise most Latin of U.S. cities.

Chapman is the big story here because of what he won’t be doing — namely, throwing 100 mph fastballs. That’s because three days earlier, after two subpar performances in which his velocity dipped to a very human, and hittable, 94.4 mph, the Reds announced their closer was suffering from a case of tired shoulder and would get a week or so off. The team, which sat 10.5 games ahead of St. Louis in the NL Central, could afford to be cautious.

“What is that?” the Reds PR guy asks while he waits for Chapman to appear. He is taking in Marlins Park for the first time and has spotted something behind home plate. “Is that a fish tank?” The spokesman shakes his head. The tank is built into the wall that separates the seats behind the plate from the field. Conceivably, bored fans can stare through it at the action on the field and pretend they’re watching an underwater baseball game. This season, some likely have. “And I hear that thing,” says a member of the Reds training staff, pointing to the garish, mechanized home run sculpture in center field, “cost over 3 million dollars.”1 Reds employees look at each other in disbelief.

Before anyone can suggest that the visitors from southern Ohio take a trip to the stadium’s Bobblehead Museum, which contains more than 1,000 perpetually nodding figurines, Chapman emerges from the clubhouse. He’s in his pregame uniform, which means he’s wearing a batting-practice jersey with no number. It hardly matters. Tall and thin, with a remarkably smooth, youthful face, baseball’s most dominant reliever this season needs no identifier. He trots past the group of reporters with his Venezuelan trainer, Tomas Vera, at his side.

That the arrival in town of an injured pitcher on an opposing team would constitute a notable event in Miami is testimony to how lousy this season has been for the Fish. It was supposed to be anything but, of course. Already loaded with promising, young pitching, a proven talent in shortstop Hanley Ramirez, and a budding star in outfielder Giancarlo (né Mike) Stanton, the Marlins went on a winter buying spree that included veteran hurlers Mark Buehrle and Carlos Zambrano, reliever Heath Bell, and National League batting champion José Reyes. And there was the arrival of manager Ozzie Guillen, who, before wearing out his welcome in Chicago, had brought the White Sox their first world championship in more than 80 years. But instead, it’s the Reds who are barreling toward the playoffs and the Marlins who are in rebuilding mode.

What team wouldn’t be, after a season like this? As of Tuesday morning, the Fish have been shut out 15 times — a franchise record — scoring fewer runs than all but three National League clubs. Their pitching staff, supposedly a strength coming into the season, has the league’s fifth-highest ERA and the fewest strikeouts. By contrast, Cincinnati ranks near the top of the league in most team pitching categories, team fielding, and home runs.

Those stats aside, the Reds’ biggest advantage over every other team in the league this year arguably was secured back in 2010, when they were able to do what some thought the Marlins were sure to do (indeed, what many believed the Marlins had to do, from both a baseball and a marketing perspective): sign the 21-year-old Chapman. At the time, the Marlins reportedly made the Cuban defector a five-year offer worth roughly $13 million. A few weeks later, the Reds inked him to a six-year, $30 million contract.

The Marlins, one might argue on their behalf, had a right to be wary. For one thing, highly touted Cuban pitching prospects — with the possible exception of Orlando “El Duque” Hernández and, to a lesser extent, little brother Liván — have rarely panned out.2 For another, Chapman, for all the fireworks produced by his left arm in international competition, had shown little ability to consistently control his 100-mph fastball. To the Marlins, he might have seemed like a Cuban Sidd Finch, and his prospects for big-league stardom like just as much a fiction.

Then again, the Marlins are the same team that signed Bell to a three-year, $27 million contract this past winter, overlooking his age (34) and reports that his fastball was beginning to sputter. So go figure.

“Here in Miami, with a new stadium like this one, with the Cuban fan base, I think it’s important to have a [high-profile] Cuban player,” says Marlins’ Spanish-language TV announcer Cookie Rojas. And the Cuban-born, five-time All-Star second baseman isn’t only talking about the team whiffing on Chapman. “The same thing happened with Yoenis Céspedes,” he says. “We didn’t sign him — and he would have been our starting center fielder.3

Tony Pérez, the Hall of Famer and special assistant to Marlins president David Samson, agrees that landing either Chapman or Céspedes would have had a positive impact on the team, but doesn’t think the Marlins have any special advantage when it comes to signing Cuban players. “It’s a business, and people are going to get the best deal they can for themselves,” notes Pérez. “The contract we offered Céspedes was very close to the one he got from Oakland, except we wouldn’t guarantee him a spot on the big-league roster, and they did.”4 Céspedes, like Chapman, has helped propel his team to a likely postseason berth.

As good as Céspedes’s season has been (.291/.351/.491 with 19 home runs and 72 RBI), though, Chapman’s borders on historic. His 119 strikeouts in only 67.2 innings works out to 15.83 strikeouts per nine innings, third all-time among pitchers with at least 50 innings. Even after his two most recent outings, opponents are still batting only .143 against him, not too far off the record for batter futility (.133) established by former Los Angeles Dodger Eric Gagne in 2003.

Having completed his workout, the man who might have been a Marlin is ushered into his 4:20 p.m. media session in a makeshift spot halfway down the ramp leading to the Reds’ clubhouse. Perhaps sensing that the delay has caused some consternation, Vera, who doubles as Chapman’s translator, takes responsibility for the scheduling snafu, then tells reporters that questions will be limited strictly to baseball matters, which means no discussions of Cuba and politics. (Ozzie Guillen could have used Vera earlier this year.)

With that, the beat writers and TV crews take turns with Chapman: How does your arm feel? (“Better.”) Have you ever experienced anything like this before? (“Two or three times.”) When was the last time? (“Last year.”) The only spontaneous moment comes when a reporter asks Chapman, in English, if he plans to pitch the following week. “Maybe,” Chapman answers without waiting for Vera to translate the question. The trainer laughs.”That’s the first time he’s answered [a question in English] right away,” Vera says.

One by one, the reporters peel off in the direction of Reds manager Dusty Baker’s office, where they’ll hear Baker echo the team line on Chapman’s recovery. “Where do things stand with him?” Baker asks, before channeling Casey Stengel: “Well, if he feels fine, everything’s fine.”

I hang back with Chapman and introduce myself. I tell him we have a mutual friend, a player on the current edition of the Holguín Sabuesos, or Holguín Bloodhounds, the team for which Chapman used to pitch in the Cuban National Series. Chapman’s face cracks into a wide grin, and he asks me if I’ve seen our friend recently. Just last year, I say. “Where?” Chapman wants to know. “Here?” No, I tell him, in Cuba. Chapman chuckles.

Chapman left behind his parents, siblings, and a newborn daughter when he defected. I ask him how they are doing. It’s not part of the interview, but I know what it’s like to have loved ones on the island. “They’re well,” says the pitcher, seemingly grateful to have found someone interested in discussing something other than his arm.

Further talk of the small towns that dot the rural, eastern part of Cuba from where Chapman hails is interrupted by a member of the Reds’ staff, who motions the reliever down a ramp. Interview time is over. With that, Chapman says good-bye, spins, and is gone, right through the clubhouse door at Marlins Park marked “Visitors.”

Gaspar González is a writer and documentary filmmaker whose credits include Muhammad Ali: Made in Miami. This is his first feature for Grantland.