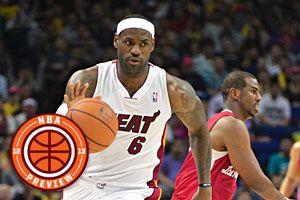 It’s (almost) here. The NBA is back. To gear up, Grantland is exhaustively previewing the 2012-13 season.

GRANTLAND STAFF
• NBA Shootaround Predictions
Grantland’s finest weigh in on what will happen in the NBA this year.

• Who Is the Next JaVale McGee?
Genius. Weirdo. Social media phenomenon. The NBA will create another. But who?

BILL SIMMONS
• The Harden Disaster
Not only did Oklahoma City destroy something beautiful, they just handed the Western Conference to the Lakers.

• LeBron’s Quest for Immortality
With a title in hand, the next step for King James is to secure his legacy.

• The Harden Dilemma
The Thunder claiming they are just a poor, small-market team that can’t afford James Harden doesn’t work in today’s NBA.

ZACH LOWE
• Serge Ibaka Is the Most Important Player in the NBA
But he has a lot of work to do if the Thunder are going to contend for the title.

• Examining David Stern’s Legacy
Looking back as the Notorious D.J.S. prepares to hang it up.

• A World Without Andrew
What the Sixers will do without Bynum.

• 26 Bold Predictions for the NBA Season
Foolproof, lock-stock, no-doubt prognostications sure to happen (until they don’t).

• The Knicks Bigs Issue
Can Carmelo Anthony really play power forward? And should he?

• A Whole New Ballgame
What is the next innovation in the NBA?

• Sizing Up Small Ball
How the Celtics, Lakers, and the rest of the league are responding to their rivals.

• The New Age of Flopping
Understanding the NBA’s rules change.

• Your Guide to the NBA’s All-League Pass Teams
The most fun squads that actually have a chance to compete this season.

• The NBA’s New Power
Determining the Association’s tiers of success — or lack thereof — after a wild offseason.

• The Miseducation of J.R. Smith
Is the Knicks’ erratic shooting guard misguided or just misunderstood?

• Bernard James, Reporting for Duty
The Dallas Mavericks’ surprising 27-year-old draft pick has been in the trenches before.

• Person of Interest: Antawn Jamison
The Lakers’ sixth man has Hall of Fame numbers; will he get the recognition he deserves?

AMOS BARSHAD
• The Celtics Get Jet-Fueled
Inside the NBA preseason with Jason Terry and the Boston Celtics.

• B.S. Report: Brian Scalabrine
Brian Scalabrine visits the studio to talk with Bill about his days as a Celtic, the rift between Ray Allen and Rajon Rondo, and why no one talks to KG before games.

• The Jalen Rose Report
Jalen Rose talks to David Jacoby about joining NBA Countdown, David Stern’s retirement, and what it’s like for athletes in a contract year.

• Video: The Jalen Rose Report
Jalen Rose reacts to the blockbuster James Harden trade and how it reminds him of his regrets from his career as a basketball player. Plus! David Jacoby clowns Jalen for wearing a fake Gucci shirt.

• Video: Jalen and Bill on Shaq’s Potential
Jalen Rose and Bill Simmons discuss facing Shaquille O’Neal in the NBA Finals and how Shaq never reached his full potential as a player.