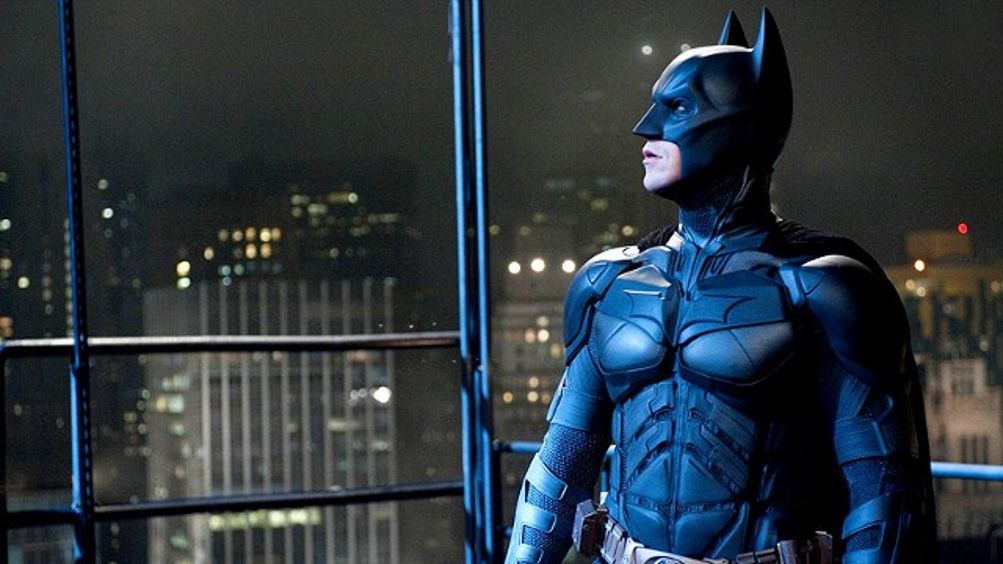 It’s probably significant that the biggest news out of The Dark Knight Rises screening rooms this week is not that the film is an exceedingly accomplished, worthy finale to what we can now pretty much definitively call the greatest comic book movie trilogy of our time, but that fans have already banded together to wish death upon the couple brave souls — out of like 100-plus generally amazed critics — who have so far dared to give the movie a bad review. Director Christopher Nolan’s trilogy has evidently already ascended to the clouds, where the cosplayers play and dissenting opinions are hurled furiously into the Pauline Kael Was Wrong About Chinatown Memorial Well.

And in the clouds is more or less where these three movies belong, much as I’d enjoy spending the rest of the week being beaten with “a thick rubber hose into a comma [sic],” or trolling the genial editor-in-chief of Rotten Tomatoes into writing a transparently aggravated open letter to his own rogue commenters that includes the phrase “come at me, bro.” But having actually seen The Dark Knight Rises, I can’t. Even if TDKR is the worst film in the trilogy — and today I feel like it is, though please don’t light my parents’ house on fire — this is the best run of comic book movies one filmmaker will ever have.

The rest of this piece will be an attempt to elaborate on that statement without spoiling much of anything about this newest film, which is another way in which you know this trilogy is already in rarefied terrain, that The Dark Knight Rises is so highly anticipated that people — including the editors of this column, who have already threatened my own home with fire and murder should this review actually turn into a review — want to know absolutely nothing about it in advance.

One interesting byproduct of the superhero film becoming the default blockbuster format of this century is that we’ve now seen directors do these films pretty much every way they can be done. We’ve watched generic blow-’em-up blockbusters camouflaged in capes and camp B-movies that used their source material as an excuse to light Nic Cage’s head on fire. Marc Webb’s The Amazing Spider-Man was basically a romantic comedy. Joss Whedon’s The Avengers was a Joss Whedon film wearing a brand-extension fright mask. Matthew Vaughn’s X-Men: First Class was a sleek period adventure — a spy movie without the spies. Martin Campbell’s Green Lantern was a failed effects carnival. Frank Miller and Robert Rodriguez’s Sin City was an attempt to bring the actual frame-by-frame noir aesthetics of Miller’s comic books to the screen. Zack Snyder’s Watchmen was a disastrous exercise in giving hard-core devotees of the medium exactly the kind of grim, slavish fidelity they said they wanted. Somewhere in there, Warner Bros. even let Seth Rogen and Michel Gondry make one, which is how we found out that Seth Rogen in a Zorro mask is the exact point past which audiences Just Will Not Go.

Christopher Nolan’s Batman movies are different. They are not genre exercises disguised as superhero films. They are not even really “about” the exploits of the well-known international brand that is Batman. Nolan makes superhero films that think hard about what superheroes actually are: symbols, mostly; moral quandaries come to life; fallible individuals in masks and suits who police certain arbitrary codes of behavior and who are regularly called upon to debate those codes with villains who have alternate, and perhaps equally valid, codes.

Nolan’s pitch to Warner Bros. in 2003 to rebuild the franchise, which had been left in bright smoking cartoon ruin in 1997 by Joel Schumacher’s Batman & Robin, did not begin with a revolutionary new color palette or a charismatic sketch or a particularly galvanizing plot, but a psychological question: What kind of dangerous, borderline personality would decide to become the self-aggrandizing, angsty-rich-kid vigilante that is Batman?

And it is striking now, watching Batman Begins, amid the Himalayan glacier porn and distracting shots of a pre-curtain-of-terrible-silence Katie Holmes, how much of the movie’s arc is a meditation on whether or not Batman should exist. (Nearly everyone, from Holmes’s Rachel Dawes to Michael Caine’s Alfred the Kindly Butler to Liam Neeson’s Henri Ducard/Ra’s al Ghul, answers “No.”) Which is a very Nolan conceit, making a film that is skeptical of its own reason for being. It’s an origin story about origin stories, one that works to turn its implacable and timeworn hero back into an exceedingly flawed, possibly delusional individual — “an ordinary man in a cape,” as one character puts it.

The Dark Knight has the same deep cast (plus an upgrade from Holmes to Maggie Gyllenhaal) and wonderfully placeless Gotham from the first film, that astonishing opening set piece, and Heath Ledger’s Joker — lip-smacking, pause-heavy, clown-formal, as outright unlikely and compelling a performance as we’ll ever get from a superhero movie. “I don’t want to kill you,” he purrs at Christian Bale’s Batman, who spends long stretches of time in this one offscreen: “What would I do without you?” But recall that the finale of The Dark Knight is essentially a complicated three-way philosophical negotiation between Batman, Aaron Eckhart’s two-faced Harvey Dent, and Gary Oldman’s good cop, Jim Gordon, about who will take credit and blame for the various morally bankrupt things each of them may or may not have done — including Batman’s decision to let die failure to save the woman he and Dent both loved. The last line of dialogue in the film, as Batman is being chased by nonfigurative hounds into what turns out to be a very real and prolonged exile, begins: “He’s not a hero.”

These are not meta-superhero movies, exactly, but they’re close: So much of the dialogue and dramatic stakes in all three films boils down to Do you really want to do this, Mr. Wayne? And if so, why? Nolan has made immensely profitable entertainment out of a superhero trilogy that bluntly interrogates our insatiable need for superheroes.

Which is not, lest you start looking at us funny, even remotely why The Dark Knight Rises is on track to have the biggest opening weekend ever for a non 3-D movie — a record held since 2008 by Nolan’s Dark Knight. This is a director who has watched Blade Runner 200 times, who is probably the most visually gifted popular filmmaker short of Ridley Scott, who makes philosophical blockbusters because The Matrix taught him that you can do that and still find an audience that numbers in the millions. A guy who understands the rules of the game: The Dark Knight Rises opens with a clutch-your-head-and-wonder-how-what-you’re-seeing-is-even-possible type of sequence; it goes on to quote the 1917 Proclamation of Baghdad and Charles Dickens’s A Tale of Two Cities, sure, but it also casts Matthew Modine, casually suggests that Occupy Wall Street was a terrorist conspiracy, and places half of the Pittsburgh Steelers roster in a crucial scene. Which is to say that it’s basically fun, in the way that third-and-final-installment, let’s-just-use-every-idea-we-have-left movies can be fun: The canvas is bigger, the provocations more spectacular and irrational, the villainy more casual, shifty, and diffuse.

Christopher Nolan has made immensely profitable entertainment out of a superhero trilogy that bluntly interrogates our insatiable need for superheroes.

Nowadays all franchise “finales” must contain within them the seed for immediate franchise reboots: That’s why cheery young Joseph Gordon-Levitt is here, playing an idealistic, grown-up-orphan crime fighter. But Anne Hathaway, as a cat-suited jewel thief who is never once referred to as Catwoman, has jokes! She is what this franchise has not yet had: comic relief. (Most of it is intentional; the part where she is supposed to stand in for the proverbial 99 percent, not so much.) The Dark Knight Rises, which is already being singled out as the darkest of the trilogy, not without reason, is in many ways also the funniest — not just because of the springy Hathaway-Bale repartee, but because Tom Hardy’s Bane, while (appropriately) menacing and (not-so-appropriately) kind of incomprehensible, has some of the same creepy levity as Ledger’s Joker, though nothing like Ledger’s onrushing sense of the void.

Nolan has long wanted to make a Howard Hughes biopic — Batman Begins was essentially the consolation prize he awarded himself when it became clear, back in 2003, that Scorsese was going to get to the story first. The film was reportedly his next project after this one, and then it wasn’t. But you can tell Nolan was thinking about Hughes a lot while working on The Dark Knight Rises: Like Hughes, Bale’s orphaned Batman has increasingly become a fantastically wealthy and delusional recluse, a former model citizen turned strange and potentially dangerous. In this last installment, Nolan gives his maybe-hero one final moment in the sun; he also sort of suggests, not for the first time, that we’d be better off without him.

We won’t be, for long — The Dark Knight Rises may have officially certified the magnitude of Hollywood’s comeback summer and the legacy of Nolan’s first two Batman films, but we will see this franchise return before the decade’s out. Should there ever really be another Batman after this one? Nolan made three films asking that very question. Now he’s done answering.

Zach Baron (@xzachbaronx) would be happy to discuss the actual plot of this film with you on Twitter.