The Sportstorialist: On Draft Style 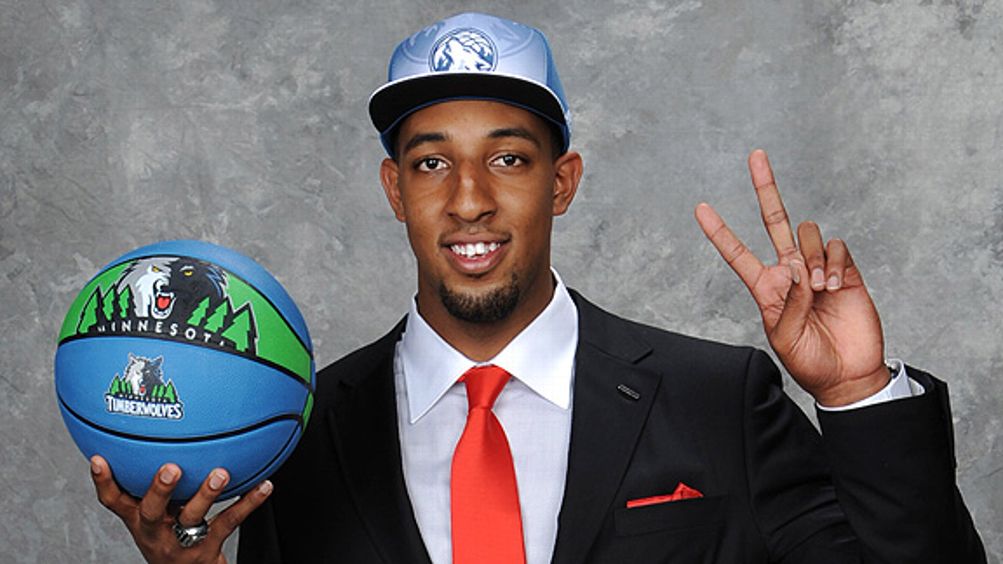 The 2011 NBA draft: It was a dizzying night of three-way trades, draft-slot jockeying, and controversial picks. While all the action and analysis was playing out on screen, I spent my night following Derrick Williams, watching the new Minnesota Timberwolves forward take his first baby steps as an NBA player. It was a long, strange, interview-and-photo-shoot-laden trip, full of copious hat adjustment, meaningful handshakes, 6-foot Czech women, and crushed blue velvet (Sager!). So, put your double-breasted suit on and fix your hair up pretty and meet me last night … at the Prudential Center in Newark, N.J.

6:00 p.m. ET — The clique of 15 players lucky enough to get invited by the NBA to the “greenroom,” are congregating behind the stage, waiting to individually have their pictures taken with David Stern. They are all on their phones. They are probably texting or tweeting, “I’m about to take my picture with David Stern.”

This shoot takes place in a large, black tent. Before each player enters, an NBA employee tells Stern how to pronounce the name of the person he’s about to meet (“This is Enes Kanter. N-iss. Right.”). During his session, the photographer tells Jan Vesely that Stern, “doesn’t bite.” Vesely proceeds to look like he’s getting his driver’s license photo taken. He’s my man.

6:45 — Kyrie Irving, Tristan Thompson, Derrick Williams, Kawhi Leonard, and … Kyle Lee Watson? Actor Duane Martin, star of the classic, ’94 hoops drama Above The Rim, is milling around, right on the outskirts of the greenroom. This means something totally profound. Art and reality and Tupac movies are blurring.

7:06 — Most of the players, seated at their tables, either look bored or nervous. Kawhi Leonard looks like he’s one piece of bad news away from moving to a cabin in Wisconsin to record some songs about a girl he once loved. Maybe he already knows he won’t be selected until the 19th pick 15th pick. He’s certainly showing it.

7:15 — The players are surrounded by their loved ones, agents, and, in some cases, their college coaches. John Caliapri seems to be all three of those things, all at once, to everyone. Dressed in a blazer over a Kentucky-blue button up, he’s hugging Kanter, he’s hugging Brandon Knight, he’s hugging Kyrie Irving. There’s actually a second when he looks to see if there’s anyone else to hug. There isn’t.

7:17 — Jan Vesely has a posse. Of women. At his table. This includes one girl who looks like, when she’s not working on her line of rompers, has a really lush and expansive sounding chillwave project.

(Vesely looks like a gigantic Jesse Eisenberg, by the way. I half expect him to look over at the Morris twins and say, “If you guys were the inventors of Facebook, you’d have invented Facebook.”)

7:30 — Showtime at the Prudential. “All Of The Lights” plays as several camera crews and photographers jostle for position around Kyrie Irving. One photographer leans over to another and asks if the older gentleman sitting with Irving is his father.

7:45 — Drafted by the Minnesota Timberwolves, Arizona’s Derrick Williams is immediately guided off stage, post-Stern-shake, to a series of interviews on the Prudential Floor. After a chat with Marc Jones, on camera, he moves over to the ESPN Radio table and talks with Will Perdue and Doug Gottlieb. He cracks his knuckles a lot.

7:50 — Enes Kanter is taken third by the Utah Jazz, which means there’s another car on the road behind Williams. He gets up from his radio interview and begins winding his way backstage.

7:51 — As the Williams train starts its long journey, I spot Brandon Jennings. Just sitting on a stool — with no fellow players, no entourage, no frills — on the Prudential Center floor, with a real, “I have no responsibilities whatsoever,” look on his face. Legend.

7:53 — We’re backstage and it’s all going off now. A cadre of women with layered hair and Tory Burch flats and stupendous Blackberry skills are directing traffic. They should take over O’Hare airport. Players are politely if firmly led through a dizzying maze. A radio interview, photo shoot, television spot, what have you. If someone is already there, the player’s handler just skips the station and moves on to the next one. It’s all very impressive.

Standing against a wall in the hallway, Kyrie Irving is on the phone. Enes Kanter walks by, gives him a pound. Derrick Williams points at Irving as he walks into a press conference room to address the assembled media.

8:07 — Derrick Williams ends his press conference after answering questions about his true position and his position on Ricky Rubio. He then begins the short walk toward the encounter that every would-be NBA player dreams about: His first Craig Sager interview. A security guard, dwarfed by Williams, makes conversation, gesturing to his fellow security guard. “You want to tweet about something? This guy’s suit cost 70 bucks!” While sonning an NBA security guard would be an auspicious way to start his NBA tweeting career, Williams instead goes with, “Wait … Is this real? NBA! wow. Tears of joy.”

8:11 — Craig Sager. Velvet suit. Cramped room. This is like if David Lynch directed Frost/Nixon. The interview is delayed for a minute while the camera crew works to find the optimal brim level for Williams’ T-Wolves hat.

8:12 — Sager interview ends. Everybody takes a breath and notices that Tristan Thompson got selected fourth by the Cavs. I think Derrick Williams speaks for most of us when he says, “Wow …Tristan!?”

8:30 — Fire and brimstone coming down from the skies, rivers and seas boiling, 40 years of darkness, earthquakes, volcanoes, the dead rising from the grave! Human sacrifice, dogs and cats living together … mass hysteria!

8:34 — At the mouth of one of the tunnels, standing on the perimeter of the floor, T.J. Fredette, Jimmer’s brother, walks by, heading backstage. He looks up and sees a group of Jimmer fans from the Fredette hometown of Glens Falls, N.Y. A huge smile crosses his face and he shouts, “We did it!” as he rubs imaginary cash between his fingers.

8:35 — Klay Thompson’s you-just-got-drafted music is an instrumental version of “Life Is A Highway.”

8:50 — Williams heads into a small office off a hallway to conduct a radio interview. Seconds later, Klay Thompson enters. There are cameras, security, and all manner of Timberwolves and Warriors employees milling around. Thompson sits down on a couch and takes a phone call from Golden State General Manager Larry Riley. By the looks of it, this seems to mean almost as much as hearing his name called by David Stern.

9:24 — Williams now goes through a gauntlet of short television interviews with cable sports networks such as Comcast and MSG. This is a long process and a closed set (television magic and all that).

9:31 — There is the sudden, furious sound of high heels clicking. Jan Vesely’s girlfriend, Eva Kodouskova, who looks to be about 6-4 and ready to take over the world, walks by. She is followed by an equally tall sidekick girl and Ms. Chillwave from the beginning of the night. Even Kemba Walker’s mother, who is doing a television interview for a local Bronx community newscast is taken aback.

9:33 — Kansas coach Bill Self and the Morris twins’ mother walk by together. I appear to have made this note for myself in my notebook: “Everyone eating pretzels.” Awesome journalism.

9:45 — There is a big cluster of camera crews from Sacramento, Utah, and upstate New York. They are waiting for Jimmer. But one by one, they are turning their attention from where Jimmer is supposed to appear, outside of the radio interview room, and focusing on Kodouskova who is now doing a delightful, impromptu press conference.

10:04 — Finally done with the gauntlet of television interviews, Derrick Williams takes pictures. He takes them with his mother and his sisters and his brother and some other people who seem incredibly important to his life and career. Then, he takes one with me. Not sure how this happened, but at this point in the night, I’m kind of going with a “When in Newark …” kind of philosophy. We take a couple of shots standing together and then we are given a Minnesota Timberwolves-branded basketball to hold.

Williams looks (down) at me. I feel like some explanation is needed.

“I just followed you around for the last two and a half hours.”