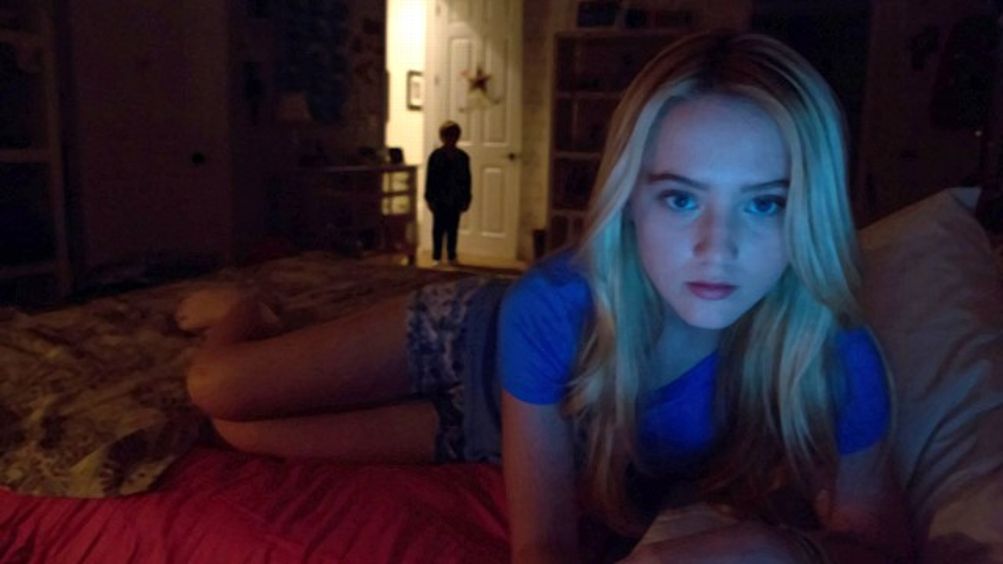 It is October and [UNFAIRLY LOUD AND SUDDEN DOOR SLAM] horror season is upon us. That means at least one major horror flick a week this month, beginning back on October 5 with the six-director anthology V/H/S, about a mound of killer VHS tapes that are found, totally not suspiciously, in a haunted house with a dead guy in it. Last week saw the release of Sinister, a movie so torture-porn-y that it led the critic who coined the phrase “torture porn” to despairingly quit the genre. This week it’s Paranormal Activity 4, the latest insanely lucrative installment of Paramount’s found-footage franchise. And next week comes the video-game spawned sequel Silent Hill: Revelation 3D, which has a giant buck knife on the poster and which I gather is about alternate dimensions and 17-year-old jailbait.

Here is usually where a modestly well-reasoned survey of the genre’s current state of the union would begin: Has the overreliance on found footage by today’s horror directors drained the conceit of all its Blair Witch–ian joy? Is the splatter flick’s long journey toward depicting an actual human death nearly complete? Has the genre drifted too close to the Joss Whedon meta-sun of knowing self-mockery? Or are we perhaps living in a golden age, in which an always-cheap method of filmmaking has been further energized by the widespread availability of affordable digital technology and cameras equipped with Paris Hilton–style infrared lenses?

People who actually know things about horror movies will have intuited by now that I have no idea what the answer is to any of these questions. That in fact these questions are themselves no more than the terrified conjecture of a scared man trying to salvage some small amount of dignity before admitting what I’m about to admit, which is that I’ve always been too much of a coward to watch even the most innocuous of horror movies. I will not try to defend my stance on this. My stance is pure, abject fear.

Well, OK. Let me just, in the name of what little pride I have remaining, offer a couple of non-cowardice-based arguments here. The first is that we as humans spend our lives attempting to avoid suffering. No one has ever sat up from his deathbed and whispered to a loved one that he or she regrets never having personally witnessed a topless 18-year-old girl having her right arm amputated in a filthy Tijuana jail. So I question the urge to voluntarily spend money to see this occur in a movie theater.

The second non-cowardice-based defense I will offer is that horror films are manipulative and coercive in a way other kinds of movies aren’t. If a person is walking alone in a completely silent house and all of a sudden there is an insanely loud noise, I will jump, because thousands of years of human evolution have conditioned me to jump. If an actress is peering into a dark cave, AND THEN A BIRD FLIES DIRECTLY INTO THAT ACTRESS’S FACE, I will startle. This is not fair. The swelling strings and welling tears that compel similarly involuntarily reactions in romantic comedies and movies about Kate Hudson dying of cancer are not analogous to a filmmaker cuing up the despairing scream of a human making peace with his own horrible death, only to reveal the source of that scare was a cat falling off a bookshelf. I do not cry during Nicholas Sparks movies. But I feel pretty much whatever these sick, sadistic horror directors want me to feel when I’m watching Saw. (Full disclosure: I have never seen Saw. What is wrong with you people?)

But I will stop this charade. These are justifications. Horror movies are probably great. I have no idea, because I don’t watch them.

This week I went to an advance screening of Paranormal Activity 4, because my editors hate me. I brought along two people who actually enjoy horror movies, Michael Myers and Dr. Loomis. These are not their real names, but I’m using Halloween aliases because Halloween is one of maybe five horror movies, along with The Shining and Alien, that I unqualifiedly love and can stand to watch. Michael Myers is a super-technical horror fan; he is one of those weird people who don’t get scared by scary movies. For him it’s more about death-scene ingenuity and whether the demon mythology in the fourth installment of a franchise is consistent with the demon mythology in the preceding three films. Dr. Loomis, on the other hand, will walk around trembling for days after seeing a horror movie, but he likes that. He’s one of those optimistic types who go to the cinema to experience the whole gamut of human emotion, from love to lust to Hulk Smash, and he includes terror, nausea, and seeing entire families brutally butchered in that gamut. Both pledged to remain silent about whatever pitiable noises I might inadvertently make once the murdering ramped up.

The Paranormal Activity franchise began as a viral, word-of-mouth success: The first PA is sometimes called the most profitable film of all time, because its initial $65.1 million gross on a movie that cost $15,000 to make yielded something like a 433,900 percent return on investment. The eventual franchise was thought up by a software programmer named Oren Peli who had never directed so much as a short film before Paranormal Activity; he got the idea for the movie after moving into a new house and being freaked out by all the creaky noises he heard. After it blew minds on the independent circuit, Paramount’s DreamWorks bought the film for cheap. The ending you saw in theaters was thought up by none other than Steven Spielberg, who, as lore has it, once found himself mysteriously locked in his own Pacific Palisades bedroom with a haunted DVD of the film, which he proceeded to return to DreamWorks in a kind of protective, contain-the-evil-spirits garbage bag.

And this has been the spirit in which the Paranormal Activity sequels have been marketed and positioned to audiences and critics ever since — at our screening, there was a DJ, who played a lot of Big Sean and encouraged us to tweet in order to win prizes; right before the film started, the directors, duo Ariel Schulman and Henry Joost — who also directed Catfish, a very different kind of found-footage film — made a surprise appearance. “Who’s ready to shit their pants?!” Schulman yelled. He offered a prize to the first person who threw up. A soothing thought entered my mind: Paranormal Activity 5: The Burning of Grantland.

When it was over, Michael Myers and Dr. Loomis both said they found the movie boring — too much dead time, by which they meant those excruciating passages of the film where the characters take echoing, suspense-building laps around their haunted house. Me, I can tell you a lot about what the back of my own hand looks like. I can re-create for you the precise mewling sounds a grown adult makes when he’s contemplating blinding himself with the blunt corner of his reporter’s notebook.

I should admit that I watched the other three Paranormal Activity films this week, too. At home, in daylight, they are not that scary. The repetition — all four film plots are basically the same — helps, too. Outside the movie theater they feel like movies about suburban California kitchens: bottles of Yellow Tail, glasses of orange juice from the fridge, burgers on the grill. At some point in each of them, the guy with the camera tries to talk his wife and/or high school girlfriend into making a sex tape, which I guess is the franchise’s way of acknowledging how much these four movies share, aesthetically, with amateur porn — the improvisatory dialogue; the dopey male voice from somewhere back behind the camera; the women in short shorts, sunglasses pushed up on their foreheads. In Paranormal Activity 3, the main couple go so far as to start filming themselves actually doing it, but they are interrupted by an earthquake, because nothing makes a demon angrier than having his devoted surveillance system co-opted.

Paramount’s original plan, when they acquired the first Paranormal Activity, was to re-shoot the film with real actors and lighting and production values, and you can see why: It looks terrible, even by grainy found-footage standards. As the franchise goes on, everyone gets better-looking, some of the mythology starts to get filled in, spooky children and incense-burning Spanish maids show up to intuit the presence of evil spirits, and the houses get bigger — you feel like it’s only a matter of time before the demon graduates to haunting Florida’s Versailles. Paranormal Activity 3‘s big innovation was to mount a camera on an oscillating fan; in PA4, they use an Xbox Kinect’s infrared radar to throw sinister green dots over everything. Schulman and Joost have directed the franchise’s last two installments, and their films are generally more dynamic than the earlier ones: They swap out the slow progression of gradually louder crashes and bangs that defines the first two movies for actual set pieces, including a pretty good one, in PA4, that involves (spoiler alert) a teenage girl being trapped in a carbon monoxide-filled garage with a ghost-revving car.

But it’s amazing how much time all four of the movies devote to people simply walking up and down stairs and crying out, “Who’s there?” These particular families may have been cursed by a 1930s-era deal with the devil and some subsequent ill-advised dabbling in witchcraft, but they otherwise tend to be as boring and suburban as the rest of us. (At least until the killing starts.) After watching four Paranormal Activity films in a row, I started to feel like the franchise was not so much a symptom of our culture’s pervasive brand of narcissistic voyeurism as it was the cure for it; at this point, my apartment could be more haunted than the Overlook Hotel and I still wouldn’t set up cameras, for fear of having to relive all the boring and inconsequential things I spend most of my day doing.

After the screening, Dr. Loomis and I split a cab home. We got to talking about his childhood: late-night viewings of Tales From the Crypt; older relatives who maintained a belief in evil spirits. He said he tagged along on a lot of candle-buying missions when he was a kid and loitered in the back of the Santeria stores with the mediums. He said the scariest thing he’d ever seen in a horror movie was Leatherface caving a man’s skull in with a hammer in The Texas Chainsaw Massacre. At this point our cab driver, a friendly middle-aged man from another country, craned his head around.

“I’m sorry,” he said. “I couldn’t help but overhear your conversion.” He said he knew exactly what we were talking about. He’d seen Chainsaw Massacre, too. Even worse, our cab driver added: that scene in The Exorcist when the words “help me” rise up like scar tissue from the inside of Linda Blair’s stomach?

“Here is my question,” the driver said. “How do they — the censors in your country — how do they allow these films?”

But for the Plexiglas I could’ve hugged the dude.