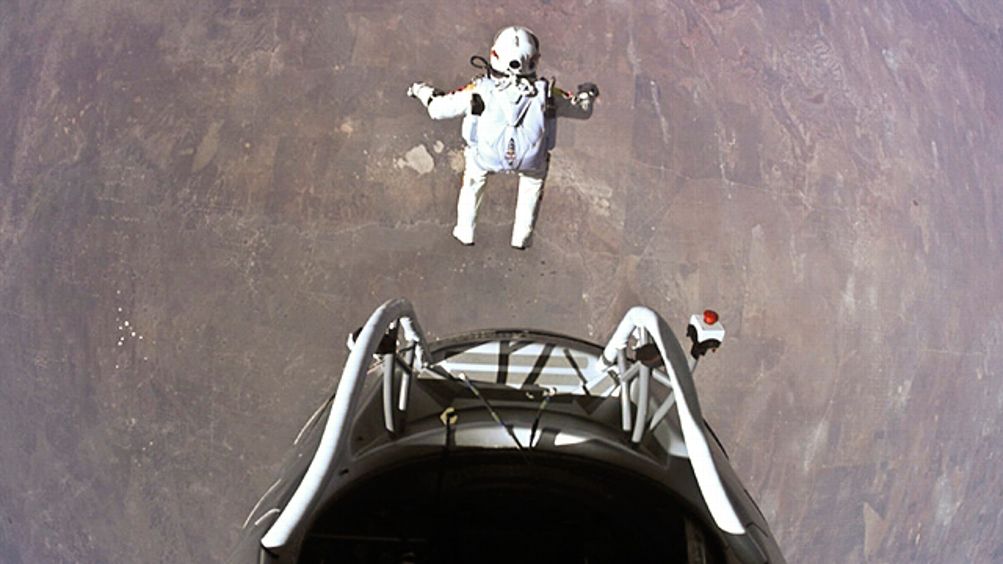 On Sunday, Austrian skydiver Felix Baumgartner flew a helium balloon over the desert near Roswell, New Mexico, to a point higher than any manned balloon flight had reached before — more than 128,000 feet, so high that from inside his pressurized capsule, Baumgartner could look out on the darkness of space. After running through a checklist with his crew far below, he disconnected the umbilical cord that attached his space suit to the capsule and climbed out onto the small ledge outside the capsule door. He looked down at the Earth, a blue-brown disc beneath his feet, surrounded by blackness. Then he jumped.

Baumgartner was in freefall for four minutes and 20 seconds. You can watch this from multiple camera angles. From the ground, where the launch center was located at Roswell International Air Center, he looks like a speck, hardly more than a glint in the camera lens, juddering against a weirdly placeless sky. If you’ve seen grainy UFO footage, or CNN shots of missiles fired over faraway cities, you have the idea. A much more jarring view comes from the camera on Baumgartner’s suit, where you see the large orb of the Earth whipping in circles around the small orb of his helmet. Early in the fall, Baumgartner goes into an uncontrolled spin that could have been fatal if he hadn’t figured out how to correct it, a process he later compared to “swimming without touching the water.” What’s most astonishing is that a full minute into his fall, the world is still visibly the world from space — the sky is something he’s falling down toward, not something he’s falling through.

128,000 feet is: four times as high as the altitude of the typical commercial jet flight.

The most haunting view, though, was the one from the capsule itself. A camera is positioned just over the capsule door, so that you look straight down on Baumgartner’s helmet. You can see his feet positioned on the last step, the left one just inching over the edge. Then he makes a short speech, distorted by electronics and by his breath rasping in his helmet,1 and then he leans forward and falls off the ledge. You know he’s going to do it, but the moment still makes your stomach drop. Close to the camera, he looked larger than life, and artificially safe in his high-tech space suit — the sort of costume, after all, that you associate with zero-g and Strauss waltzes and astronauts floating upside down, the whole silly routine of weightlessness. Now suddenly he’s plunging helplessly away from you and you realize that gravity is indeed in effect. Two seconds into the fall, he’s a white dot against the planet. Six seconds in, he’s invisible. Again, Baumgartner fell with no parachute for four minutes and 20 seconds.

4:20 is: only a minute shorter than the whole rendition of “The Blue Danube” that plays during the space-docking sequence in 2001: A Space Odyssey.

I want to go back a hundred years, to the day in 1912 when Franz Reichelt jumped off the Eiffel Tower. Reichelt was an Austrian-born tailor who lived in Paris and became obsessed with the idea of designing a wearable parachute. There are black-and-white photos of him modeling his design — drooping antique mustache, mad inventor eyes, folds of fabric buckled to his chest and billowing out all around him. After conducting several failed experiments with dummies at low altitudes, Reichelt, who was convinced his design was perfect, decided to try the suit from a higher elevation and wear it himself. On February 4, he showed up at the Eiffel Tower, where he posed for some pictures and talked to the press. Then he jumped, trailing fabric like some sort of weighted ghost, and fell straight to his death. You can watch video of this moment online, too. The Eiffel Tower is the height of an 81-story building. The video includes footage of authoritative-looking men measuring the crater Reichelt made when he landed.

Within the first 42 seconds of his fall, Baumgartner reached the speed of 834.4 miles per hour, making him the first human being to break the sound barrier without a vehicle. The typical commercial jet, for comparison’s sake, flies at around 500 miles per hour. After screaming toward the Earth for another 218 seconds, Baumgartner deployed his parachute, drifted down for another several minutes, and landed safely on his feet. At which point he happily fell another two feet or so, onto his knees.

A hundred years ago, before we took it for granted that we could all live on the moon if Congress would only raise taxes, a large public cared intensely about speed records, air races, parachutists, and feats of aerial daring. The morning newspaper brought the results of the latest sensational exploits. At the start of the 1911 Paris-to-Madrid air race, during which Louis Train crashed his monoplane into the prime minister of France, hundreds of thousands of people turned out just to watch the fliers take off. When Charles Lindbergh landed at Le Bourget Airport after flying from New York to Paris, navigating by the stars, the crowd pulled him out of the cockpit and carried him over their heads for half an hour. It was the era of zeppelins and astonishment. Flight, which had been a crazy dream for nearly all of human history, was suddenly something we could do. The fascination with stunts and records was partly scientific: In the same way that gaps on the map were filled in by intrepid individual explorers, our sense of what was possible in navigating the sky would be defined by solo daredevils, inventors, and balloonists. But it was partly born of wonder: Each new accomplishment was a fresh reminder that people could fly.

Maybe the most incredible thing about Baumgartner’s jump was not that he did it successfully but that, for a short while,2 he brought the world back to that old daredevil wonder. Yes, he was sponsored by Red Bull and broadcast live on YouTube, but that’s actually kind of the point: He pushed the limits of human flight so far that he made the whole Internet remember that flight is like magic.3 He took social media’s constant search for the next big distraction and funneled it into old-fashioned amazement. In that way, his jump resembled the landing of the Curiosity rover on Mars in August. But where the NASA mission recalled the popular-scientific inquisitiveness of an earlier era of flight, the response to Baumgartner echoed the other part of the equation: the sense of purposeless glee people felt at the sight of a brave deed splendidly done. Baumgartner’s jump might lead to some scientific progress, in the form of space suit advances and so forth.4 But that’s not why we were all memorizing the numbers5 and freaking out when his visor fogged up and tweeting about every second of the fall.

128,000 feet is: a record that exists for no reason, and therefore one of the best reasons of all.