The Reducer, Week 32: City’s a Sucker 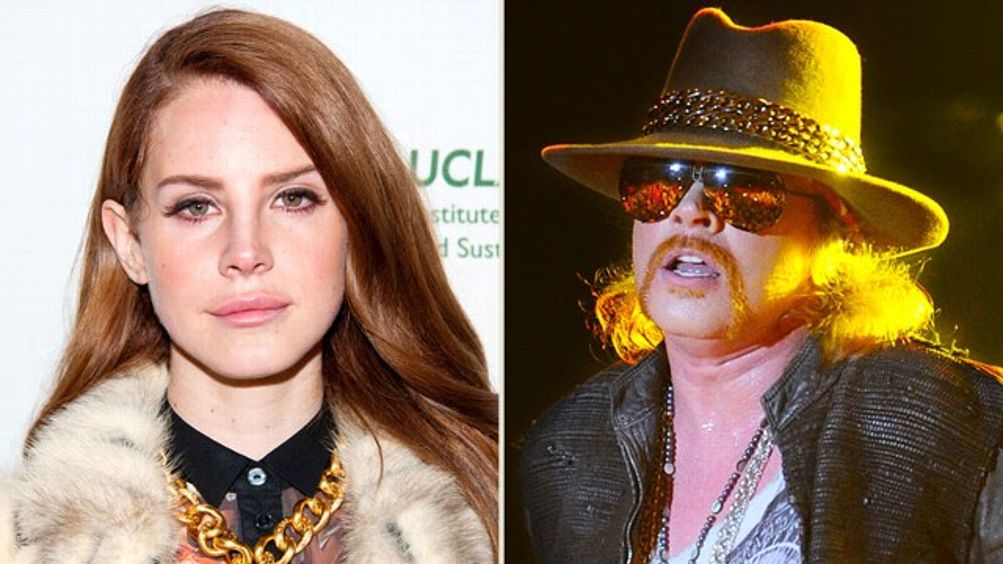 “This is the end of my life in art. At last I have found the woman I am looking for. It is summer. It is the summer. It is the summer I waited for. We are living in a suite on the fifth floor of the Chateau Marmont in Hollywood. She is as beautiful as Lili Marlene. She is as beautiful as Lady Hamilton. Except for the fear of losing her I have no complaint. I have not been denied the full measure of beauty. Nights and mornings we kiss each other. The feathery palms rise through the smog. The curtains stir. The traffic moves on Sunset over painted arrows, words and lines. It is best not even to whisper about this perfection.”

—Leonard Cohen, “The End of My Life in Art”

It’s probably not what it looks like. These things seldom are. At some point, maybe by the time you finish reading this, we’ll have found out that there’s some boring, platonic reason Lana Del Rey was paparazzi’d leaving the Chateau Marmont hotel with Axl Rose late Friday night. If past performance is indicative of future returns LDR-wise, the truth will be less interesting than the cloud of ambiguities. We’ll hear that they just sat and talked — about the importance of stage presence, maybe, or about wanting to punch people who work for music magazines in the face, or plastic surgery, or Jimmy Iovine. Dolphins, maybe. Lana Del Rey seems like she’d have dolphin questions.

Or maybe it’s work-related. We might hear about them working together on some track destined to be cut from the final running order of Chinese Democracy II: Legend of the Red Panda eight years from now. Some recording engineer quoted in an oral history will swear it was a masterpiece and cite its absence from the finished record as further proof of Axl’s unparalleled ability to get in his own way. We will never hear the song.

It’s also possible that these photographs represent the beginning and end of their collaboration, that DelRose was a one-off, and maybe a calculated one. A Berlin newspaper reported last week that Del Rey had been spotted dining with and riding an elevator with Marilyn Manson, retired shock-rocker and confirmed heart-shaped sunglasses fetishist, and if you want to make people stop talking about your having maybe let the “God of F*ck” do gross stuff to you in Germany, suggestively carpooling with Axl Rose — from the Chateau, one of L.A.’s (and Earth’s) most obvious paparazzi fishin’ holes, a place people go to in order to be seen leaving it — is a pretty good way to change the conversation.

But for right now, we get to live in a world where we all get to imagine that Lana Del Rey is Axl Rose’s new rocket queen. Or we live in a bubble universe between the reality where that’s true and the reality where it isn’t. These moments where we don’t know something are the closest thing to novelty and mystery our overinformed age has to offer us.

Suggested bubble-universe soundtrack: This sweetly bereft instrumental cover of Del Rey’s “Video Games” by the still-granuloma-afflicted John Mayer, which Mayer posted to Tumblr on Thursday. Sounds like The Durutti Column!

Current Guns N’ Roses guitarist DJ Ashba — whose signature-hat game is no match for Buckethead’s — expressed skepticism to a TMZ cameraman. “I don’t think they’re dating,” he said. “Axl’s a cool dude and he likes to hang out with cool people.” So far, this is as close as we’ve come to an official statement from the camp of anyone involved. Everyone on the Internet is writing look-what-the-supposedly-troubled-person-has-done-now, click-here-to-feel-smug-about-someone-else’s-life-choices stories about Del Rey anyway; it’s as if we’re determined as a culture to put her in some early-Fiona/mid-period-Winehouse crazy-lady attic just because she was bad on Saturday Night Live once. Everyone is bad on Saturday Night Live! And while I’ll concede that taking a secret elevator ride with Marilyn Manson is probably in the cry-for-help ballpark, a Del Rey–Axl liaison would actually make perfect sense.

There’s a poetry to the pairing, whatever the nature of the pairing turns out to be. The emblematic singer-songwriter-YouTuber-pariah of the mayfly-career-arc Web 2.0 epoch, and a hard-rock tortoise twice her age, a man who took so long to finish his band’s last album that by the time he emerged from the bunker, the entire music industry had crumbled, as if he’d personally bled it dry through years of pricey EQ’ing. And Del Rey’s a GNR fan, supposedly. She was photographed leaving one of the band’s L.A. shows in March, wearing her customary illegible smile and a half-shirt with Frank Sinatra’s young-Hoboken-hood mug shot on it; in her unreleased and now-prophetic song “Axl Rose Husband,” she calls him “Daddy” (and also, confusingly, “Greenwich”) and sings “In blue denim, I meet you.” And that’s exactly what happened! She wore head-to-toe denim the night she met Axl. In the LDR universe, blue jeans are magic.

In the pictures from Friday, Axl is also wearing denim: Boot-cut bad-idea jeans that appear to have been precision-slashed, possibly by some sort of DenimSlasher app. He’s also wearing a lot of silver man-jewelry. (He’s too metal to go through a metal detector.) The jeans and the jewelry were the second and third thing I noticed; the first thing I noticed was the choreography. Del Rey is up front, looking at the camera without looking at it, smoking, and Axl’s trailing behind her, not smoking, thumbs hooked in his pockets. Del Rey is being all sphinxlike, but Axl can’t do that. Axl looks surprised and weirdly happy to be leaving the Chateau Marmont on a fine spring night with a beautiful pop star half his age. He looks like he’s trying not to look too proud. There is video of their exit, too. Some doofus behind the camera asks him if the original lineup of Guns N’ Roses will get back together — there’s pipe-dreamy talk that they might, at the Rock and Roll Hall of Fame induction ceremony — and he says, “Not in this lifetime,” then closes the car door.

Of course Del Rey wants us to see her with Axl. Of course Axl fits into Del Rey’s personal pantheon, her carefully curated, Americana-saturated sparklers-and-trailers-and-Coca-Cola fantasy life. She’s drawn to icons and to fadedness. An artist with a less keen aesthetic would just date some rock personality her own age — some idiot who thinks he’s Axl Rose, whoever the 2012 equivalent of the dude from Buckcherry is. Del Rey sought out the genuine article. He’s the Last Unicorn, the last universally recognized rock star. There will never be another Axl — because the culture has changed and no single artist of any kind will ever command the kind of attention Rose did in Guns N’ Roses’ heyday, yes, because we don’t make sacred monsters like him anymore, but also because no record company will ever again pick up the tab for an arc like his, from earth-scorching decadence to obsessive, money-burning studio reclusion. No one will ever pay a public figure to drown himself so many ways — in groupies, in anger, in perfectionism and self-doubt. Neither Del Rey nor any artist her age will ever know what it’s like to walk away from a wreck as spectacular as Guns N’ Roses. Having been Axl is like having been an astronaut.

Maybe she just wanted to ask him what it was like to write your name across the world in 50-foot letters made of fire without having to worry about what Stereogum commenters might say about you. Maybe she looks at the 50-year-old Axl and sees Axl at 25, wounded and merciless and serpentine. Maybe Axl is hanging out with her because he likes seeing himself through her Instagram eyes. There’s poignancy to the idea of Axl being in love or something like it with Lana Del Rey because it allows us to see Axl as a man, and not the cultural sideshow attraction he’s been for two decades. A man of 50, with the attendant vulnerabilities and vanities and yearnings, with a soul. A man who likes feeling like Axl again, even though he can’t forget for a minute how fast the sand is slipping through the hourglass. It’s kind of beautiful to think about.

The Cohen prose-poem quoted above is from his 1978 book Death of a Lady’s Man. It’s about holing up in the Chateau, drinking Red Needles, feeling knocked sideways by love at 41. I keep imagining it as Axl’s internal monologue, the Slaughterhouse 90210 caption under the Chateau pictures:

I want to change blood with her. I want her slavery. I want her promise. I want her death. I want the thrown acid to disencumber me. I want to stop staring. Six-fifty. Ruined in Los Angeles. I should start smoking again. I’m going to start smoking again. I want to die in her arms and leave her. You need to smoke a pack a day to be that kind of man. When we were on the road I was always ready to drive her to the nearest airport and say good-bye but now I want her to die without me. I started my exercises again today. I need some muscle now. I need a man in the mirror to whisper courage when I shave and to tell me once again about the noble ones who conquered all of this.

Geographical-historical note: The Chateau obviously looms larger in Del Rey’s personal mythology than it does in Axl’s. His story mostly unfolded on the other end of the Sunset Strip, at the Whisky and the Rainbow. But when Del Rey and Rose walked down the Chateau’s driveway on Friday they were about two minutes by car from 7508 Sunset Boulevard, where in 1985 Izzy Stradlin hauled a dead man’s couch off the sidewalk and into a rented 12-by-12-foot room off the back alley. This became Guns N’ Roses’ practice space and crash pad, the site of an endless shoebox-Sodom party fueled by heroin and Night Train wine, the staging area for the band’s pirate assault on the rest of Los Angeles and the birthplace of GNR’s legend. Stradlin, quoted in Stephen Davis’s GNR biography Watch You Bleed: “We sold drugs … We sold girls. If one of the guys was fucking a girl in our sleeping loft, we’d ransack the girl’s purse while he was doing her. We managed.”1

By 1991, Axl had moved up in the world. The prize in MTV’s “Evict Axl” contest that year was the singer’s mirror-walled condo at 432 Curson Street — nine minutes south of the Chateau — and the furniture and stereo equipment therein. “You can have the pad,” Axl says, while boarding a tour bus, at the end of the contest promo. “I’m keeping my aura.”