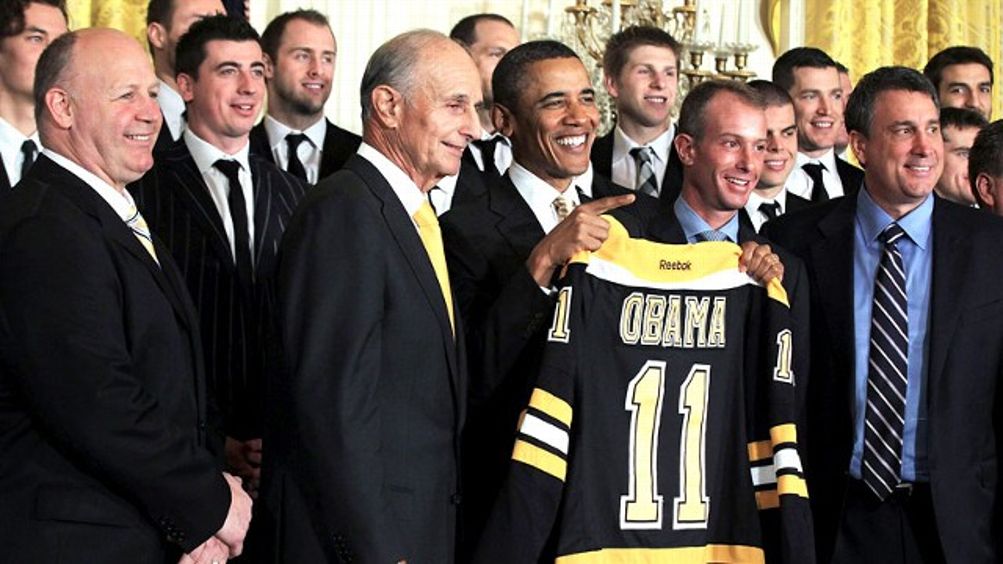 Soooo … where were YOU when you learned that Boston Bruins goalie Tim Thomas is the kind of guy who writes Randomly Capitalized e-mails about the Constitution and his INDIVIDUAL rights as a Free Citizen?

On Monday, the Boston Bruins popped by the White House for a customary meet-and-greet with the president, the kind of photo op that is orchestrated for most championship-winning teams on the collegiate and professional level and has spanned numerous administrations. As the 2011 Stanley Cup squad stood on the risers behind Obama while he cracked low-grade jokes written for him by someone else,1 it didn’t take long for reporters to notice that Tim Thomas was nowhere to be seen. When team officials, asked about his absence, replied that they were aware of it and that their Conn Smythe-winning goalie would be explaining his absence “on his Facebook page” later that day, you knew there was no way any of this could end well. And it didn’t.

I believe the Federal government has grown out of control, threatening the Rights, Liberties, and Property of the People.

This is being done at the Executive, Legislative, and Judicial level. This is in direct opposition to the Constitution and the Founding Fathers vision for the Federal government.

Because I believe this, today I exercised my right as a Free Citizen, and did not visit the White House. This was not about politics or party, as in my opinion both parties are responsible for the situation we are in as a country. This was about a choice I had to make as an INDIVIDUAL.

This is the only public statement I will be making on this topic. TT

Regardless of whether you believe Thomas that his acts weren’t “about politics,” whatever that means, the public’s response to them instantaneously took on every hallmark of political discourse: loud, impassioned, accusatory, personally wounded, and outraged. As happens in about 95 percent of the world’s debates, the phrases “First Amendment rights” and “contractual obligations” butted heads. The equal-and-opposite scenarios — “Did you care when Theo Epstein snubbed George W. Bush?” — were dragged out. The examinations into past hypocrisies commenced. (Thomas played for Team USA in the Olympics and attended a publicly funded university.) The governor weighed in. Small nuggets of previously unremarkable information were furiously panned through: His goalie helmet says, in Gadsden flag style, Don’t Tread on Me! He once said if he could have dinner with anyone, it would be Glenn Beck!

That last one I actually remember hearing at the time; to be honest, I assumed it was a joke. (Well, either that or some sort of genuine “I’d like to sit down with the man to see if he’s just misunderstood” kind of charity.) That’s because I’d absorbed the usual descriptions of Thomas as “so cerebral” and “such a thinker” and “a University of Vermont grad” and, supplemented by the times I’d seen him speak live, erroneously and snobbishly assumed that those things translated to “hippie liberal free spirit.” I’m sure I wasn’t alone.

But nope, the guy who plays that role on the Bruins is apparently Andrew Ference, according to CSNNE’s Joe Haggerty, who wrote that his employers had been working on a segment about Ference’s efforts to get the team to recycle and “live environmentally-conscious lifestyles in their day-to-day existences as hockey players.”2 Haggerty wrote that Thomas declined at the time to give his opinions on Ference’s endeavors: “We’ve got pretty opposite viewpoints on that kind of stuff.”

There’s no disputing the argument that Thomas’ decision has been a distraction to the team. How could it not be, with the entirety of the media, from hockey beat writers to Reason.com sports dislikers, weighing in? (Almost immediately, cryptic and critical reports from vague “team sources” suggested that Thomas was destroying the locker room; when he didn’t play the next night, people murmured that he might be on his way out.)

But it was Thomas’ political Bizarro, Andrew Ference, who made the best point: This wasn’t some shell-shocking revelation to anyone on the team. “We’ve had the same group of guys around here for how many years now?” he said. “We’re all practically married to each other. It’s not like there are any secrets about viewpoints or personalities. Maybe it’s interesting for everybody else to read on the outside, but for us it’s another day. It’s the same family we’ve had for the last few years. It hasn’t changed the dynamics for us.”

Once I read that quote, I basically stopped reading anything else. True, this Thomas thing has been a distraction — a distraction from matters of much greater sociopolitical import. Such as: How funny was it that not only was Tomas Kaberle at the White House with a team he did next to nothing for, he was completely front and center in every shot??? Also, OMG THIS PHOTO. I’d like to see what Reason.com has to say about THAT.

Another week, another great goal from the league’s slipperiest sonofabitch, Pavel Datsyuk. Sure, he totally loses Alex Pietrangelo on this play, but even if he hadn’t I’m not so certain the St. Louis defenseman could have really defended a backhand this sneaky-good. I’m contemplating launching a stand-alone section of this column called “DAY-UM, DATSYUK” just to house this guy’s inevitable weekly clips.

And because I love backhands (and particularly backhands that the NHL online video crew categorize as “filthy”), here’s another one that satisfies both requirements. Here, Tyler Seguin steals the puck in the Boston zone and puts it AHHHH TOP CHEDDAR WHERE MAMA KEEPS THE PEANUT BEAUTY! Sorry about the outburst, but this goal just really inspires me to mix my hockey metaphors.

In other sweet plays this past week from the convex side of the stick, the Florida Panthers’ Tomas Fleischmann spins around to his backhand to take advantage of a wide-open net; the Sharks’ Logan Couture buries one past Roberto Luongo shorthanded, and Toronto’s Tyler Bozak lofts a backhand saucer to Matthew Lombardi that looks more like a passing play you’d see on a football Sunday.

The St. Louis Blues’ Andy McDonald made it into a lone NHL All-Star Game in 2007, as a replacement to Henrik Zetterberg, and the then-Anaheim Duck validated his last-minute presence by winning the fastest skater skills competition. For a player like McDonald, getting selected for the game was and remains an honor, a potentially once-in-a-career type event.

For Alex Ovechkin, though, the opposite may be true. Not only has Ovi already been to all four All-Star Games held during his first six years in the league, he was placed into this one based neither on fan votes nor on any particularly outstanding play thus far this season. Instead, he was essentially selected on the merits of his lifetime achievement,3 even though it began to seem clear that he had no real desire to go.4

Which might be why McDonald bristled on Wednesday morning when it was announced that Ovechkin, who was suspended for three games by the league on Monday for a charge on Pittsburgh’s Zbynek Michalek, would be withdrawing from the showcase event in Ottawa this weekend. (“My heart is not there,” Ovechkin explained. “I [got] suspended so why I have to go there? I love the game; it’s great event. I’d love to be there, but I’m suspended.”)

“[C]lassless move by @ovi8 ‘opting’ out of NHL Allstar Game,” McDonald tweeted.5 Later, he put up a link to a similarly critical blog post by Jeremy Roenick, who wrote that Ovechkin’s decision was “a cop-out” and “not the proper way to deal with it.” The Canadian Press’ Chris Johnston noted that “Andy’s not the only player who feels this way.”

This was a lose-lose situation for Ovechkin, though. Had he gone, there would have most certainly been widespread howling about how a suspended player shouldn’t be allowed to participate, about how he never deserved the spot anyway, about how the league only cares about its pet players/the Eastern Conference/the bottom line. Instead, we got the other side of the coin: Ovi is being selfish, he’s slapping the league that has made him hundreds of millions of dollars in the face. (Never mind that he’s generated the NHL a substantial amount in return.) All of these statements are a little bit true, but that doesn’t mean that they’re not getting blown out of proportion. Everyone makes fun of All-Star Weekend until someone decides not to appear in it, and then all of a sudden the game turns into the most cherished event of a lifetime.

I acknowledge and agree with the importance of a player of Ovechkin’s caliber and popularity stepping up to appear in an NHL-wide event such as this, and I understand McDonald’s annoyance that Ovechkin seemed to be operating under his own set of rules. But as Nick Kypreos pointed out, “the truth is the league gave Ovechkin the wiggle room to take a pass.” If it were that important to the NHL that he play in the All-Star Game, the NHL probably could have ensured that he did — or at least doled out some sort of punishment otherwise. (In 2009, Datsyuk and Nicklas Lidstrom were each assessed one-game suspensions for withdrawing from the All-Star Game with injuries that had not caused them to miss any regular-season play, while an injured Sidney Crosby avoided such punishment by flying to Montreal to participate in off-ice activities.)

Instead, the league backed off, maybe because they knew things wouldn’t be ideal either way, that everyone would come out with shaving cream in their eyes. Perhaps the NHL knew any attempt to strong-arm Ovechkin might seem a little bit inconsistent in light of the fact that a couple of other players were essentially given free passes.6 You can certainly blame Ovechkin for acting as if he makes his own rules, but I don’t think you can do it without wondering why the NHL decided not to enforce theirs.

It looked like perhaps
John Kerry spoke out of turn
But nope! Just hockey.