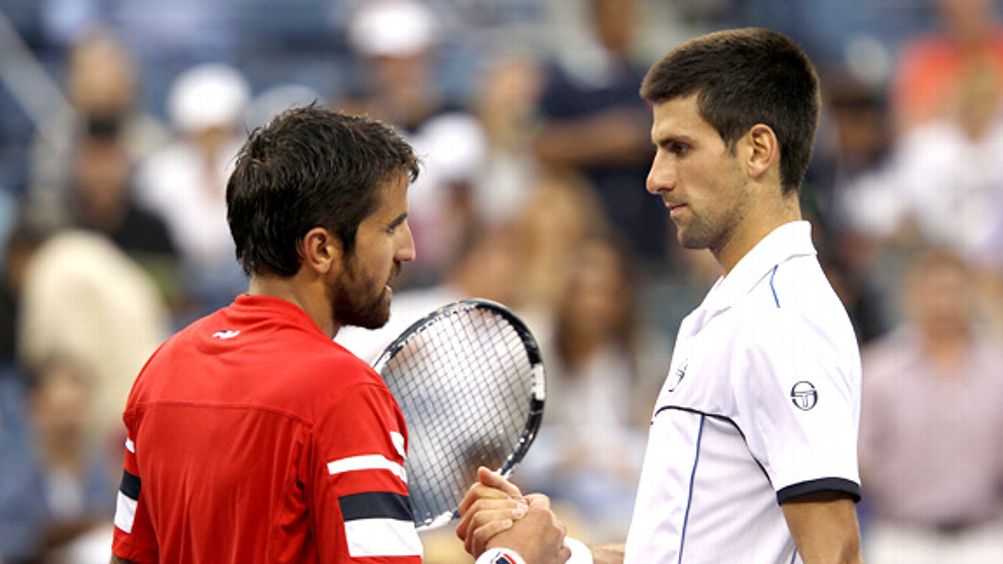 Recently, my husband turned to me in irritation and said, “Do you ever root for the underdog?” It was an accusation, not a question, and it was a tiny bit true (even though I naturally responded that I root for the underdog all the time). I can bring myself to root against Roger Federer — and Rafael Nadal and Novak Djokovic — for no more than two sets. Just enough to challenge, not topple, them. You see, if they lose, then they’re out of the tournament and you can’t watch them anymore. Who would cheer for that? What’s better than the best at their best?

Tennis, in this way, is as profoundly aristocratic as its reputation. Rank matters (just look at the ruffled feathers over the unreality of the women’s rankings). It is a game of deference. The point is to stay in bounds — to get as creatively close to the lines as possible without crossing them. Even the game’s rebels depend on its conservative ethos — and there aren’t too many of those these days. Authority rules. Nadal’s benevolent dictator, Uncle Toni, is more famous and more admired than most of the top 20. As long as the tennis is beautiful; as long as the trains run on time …

On Wednesday, the trains broke down, and suddenly everything seemed ready to collapse. It was great. Revolution was in the air! After 15 minutes of play in wet conditions, the players were ready to revolt, to storm the gates! (Or at least the tournament referee’s office). The normally unexcitable Nadal, who had quickly gone down a break in his fourth-round match to 12th-seeded Gilles Müller on the slick court, looked ready to light the fuse. “It’s the same old story,” he reportedly said to a tournament official as he left the court. “All you think about is money.” There was talk of unionization, solidarity. Television viewers were treated to the rare sight of top players standing and conferring together — not separated from each other by a net or shielded by one of those enormous pod-like umbrellas held over them during changeovers. Andy Roddick, Andy Murray, and Nadal entered the referee’s office together, a scene that was repeated that night by the women scheduled to play (that session was canceled, too). “The fact is the players feel frustrated,” Djokovic told the New York Times. “The players feel they’re not protected. This is maybe a turning point for all of us. It was coming for many years.” Rain can make for surprisingly good theater.

It was mostly theater, but it wasn’t meaningless. It unsettled things, turned them upside down. There was a kind of lawlessness in the air. Men who would be kings were talking like proletarians. Nadal began his fourth-round match down 3-0. Three Americans (including Donald Young, the man who had recently been a symbol of American promise and underachievement) were playing on Day 11. After cracks appeared on the court in Louis Armstrong Stadium, Andy Roddick, who hadn’t played on any court but Ashe since 2002, was moved to tiny Court 13, where spectators got a view by scaling the fence. The women’s side wasn’t immune. Serena Williams was broken three times by Anastasia Pavlyuchenkova. The 92nd-ranked Angelique Kerber made the semifinals. Anything seemed possible.

I knew things had really taken a strange turn, though, as soon as Djokovic took the court against his countryman Janko Tipsarevic. I have always had a soft spot for Tipsarevic, who wears glasses and a beard and ugly Fila shirts, and who has some nerdy tattoo quoting Dostoevsky’s The Idiot on one arm and Japanese katakana on the other (Schopenhauer is rumored to be scrawled on his back). I never thought I’d actually want him to beat Djokovic, though.

No one thought he wanted to beat Djokovic either. He knows his place in the tennis hierarchy. “I am extremely grateful for having Novak as a part of my life, because I have a chance to look from a front-row seat what the world’s best tennis player is doing,” Tipsarevic said recently. On Thursday he had an even closer look. And for a little while he looked even better.

Tipsarevic played magnificently and raced to an early lead before falling apart and losing the first set in a tiebreaker. This is when most players give up. But Tipsarevic pushed on, matching forehand for forehand, not missing a serve, running down shots that only Djokovic should catch, wrong-footing the no. 1 player in the world. He won the second set in a tiebreak when Djokovic sent a forehand long. He played as if he thought he could win — and, unbelievably, I believed him. It was thrilling. It was like the possibility of beating your more talented, smarter, better-looking, charming best friend. You want it so badly. Underdogs, unite!

Only that was it. Tipsarevic had spent all he had. Djokovic won the third set 6-0 and was up in the fourth 3-0 when Tipsarevic retired, completely exhausted. The threat of revolution passed, dispelled like the clouds by a burst of sun. Murray easily handled Young; Nadal dominated Müller; Williams, despite those breaks, didn’t even drop a set. The players got what they wanted; the men will not have to play four straight days but instead will contest the final on Monday. Harsh words against the USTA gave way to praise for handling a difficult feat of scheduling. In the ultimate show of restoration, Federer played a brilliant match against Jo-Wilfried Tsonga, the man who not only beat him in their past two meetings, but humbled him. Tsonga was sluggish, but it hardly mattered. Federer played peerlessly for parts of the match, winning 6-4, 6-3, 6-3.

A sense of relief settled in. Order was restored. I totally get that rooting for the little guy is a sign that you’re a good person, and my wish that every final feature two of the top three is a sign of monarchical tendencies. Maybe I’m a bad person. But I did sleep better after watching Federer float around the court. Remember, the ball is supposed to stay in the court.

But Tipsarevic’s play will stay with me, too. He may have quit, but he quit like a hero. When asked about the recent spate of players retiring from matches, Federer sniffed. “For me, it is shocking to see so many retirements,” he said. “I have never retired in my whole life except once when I played against Blake in Paris, but I didn’t even walk onto the court. For me, it doesn’t matter how bad I’m feeling, I will be out there and giving it a try, because you never know what’s going to happen.” Watching Tipsarevic, nothing seemed further from the truth. He had lost, but he would not be defeated. Djokovic is the best; the hierarchy was reaffirmed. But Tipsarevic ended the match on his own terms, and walked out under his own power.