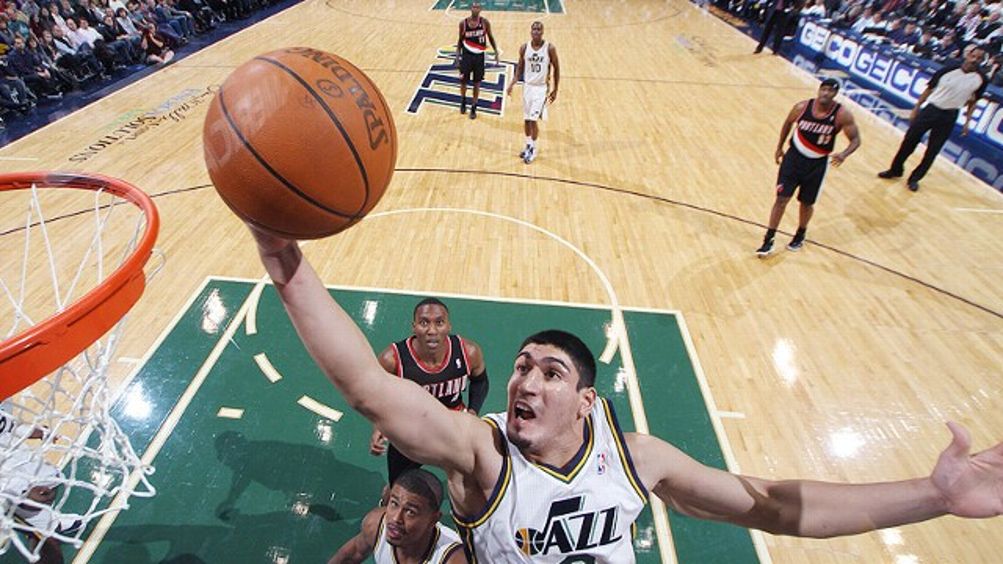 This week, the rookie rankings will place a special emphasis on defense. Many rookies receive playing time based on whether they play defense. For first-year players, offense is usually easier to master at the professional level. They learn the plays, learn what their coaches expect from them, and then go out and play. On defense they have to learn complicated schemes, make quick adjustments, and focus on executing, because unlike in college ball, just about every NBA player can score.

Kyrie Irving and MarShon Brooks both recently returned from the injured list, and they’re back in the top 10, although the road back from injury has been different for each player. Irving, who suffered a concussion, hasn’t missed a beat. He’s playing just as well as he was before the injury. Brooks, who broke his toe and needed to rest a sore Achilles tendon, is still finding his way back into the flow with the Nets.

Irving’s scoring has remained steady since returning to action, but his shooting percentage has dipped. After an efficient 8-12 shooting game in his first game back, Irving followed that performance by going 5-15 and 8-21 in his next two games. For another player, back-to-back games like that might be enough to lose the no. 1 ranking, but Irving has been able to remain effective by getting to the free throw line. Irving shot 15-16 at the free throw line over those three games. Those aren’t just easy points for Irving. It’s a sign of maturity. He saw that his shot wasn’t falling, so he started attacking the rim and getting to the line. Irving gets to the line so much because he invites contact rather than shies away from it.

Irving rarely falls away from defenders when he drives to the rim. He goes to his spot — the front of the rim — and if there’s a defender there, so be it. When Irving creates contact, he puts the pressure on the officials to make calls, and those calls have been going his way recently.

Ricky Rubio is a very good defender in isolation situations. During those possessions, Rubio holds opponents to 0.708 points per possession, which is in the top 35 percent of all NBA players. He also forces turnovers 13.8 percent of the time and allows just 31.3 percent shooting against isolation offense. That said, Rubio struggles with team defense. He has to defend the ball handler in pick-and-rolls on 46.4 percent of his defensive possessions, and he doesn’t do it very well. Opposing guards score 0.862 points per possession and shoot 43.1 percent when they use ball screens against Rubio. That puts the Spanish rookie in the bottom third of NBA players when defending ball screens. His problem stems from the trouble he has getting around ball screens.

Sometimes, Rubio gets “stuck” on screens, meaning that when he runs into the screener, he just stays there, unable to get over or under the screen and allowing the ball handler an open lane to the basket. When Rubio does get around screens, it’s usually by going under them. This strategy allows Rubio to stay in front of his man, and if the ball handler pulls up for a jumper, Rubio is often long enough to bother his shot. But Rubio hasn’t been executing this technique well. Too often, he goes under screens and then takes the play off, allowing his man to get into the lane. The point of defending a pick-and-roll by going under the screen is to cut off penetration. If Rubio does this, and then does his best to challenge jump shots, the Timberwolves should have a solid strategy for defending the pick-and-roll.

Kanter is still a raw player in many ways. He is advanced, however, in one aspect of the game, and that is showing defensively on pick-and-roll plays. According to Synergy Sports, when Kanter shows against pick-and-roll ball handlers, teams score just 0.622 points per possession. That puts him in the top 15 percent of pick-and-roll defenders. Teams also shoot 32 percent and commit turnovers 24.4 percent of the time when Kanter guards ball screens. And Kanter’s sample size is significant — 45.6 percent of his defensive possessions include him showing against ball screens.

Kanter doesn’t show hard against pick-and-roll plays, which is very smart because Kanter isn’t that quick. Instead, the Jazz let Kanter play a zone of sorts when he shows. He tends to fall back and stay in front of the ball handler. By doing so, he has been effective at stopping dribble penetration. Kanter either forces the ball handler to pick up his dribble or he uses his size to stay in front and bother the driving player’s pass attempts.

Shumpert is the Knicks’ most versatile defender. Sure, Tyson Chandler anchors the defense and Jared Jeffries takes lots of charges, but Shumpert has been defending players at every position from point guard to power forward. New York even tried him out on Dirk Nowitzki when they played the Dallas Mavericks on Sunday. Shumpert’s defense definitely warrants praise, especially in isolation situations, where Shumpert holds players to 27.3 percent shooting and 0.600 points per possession. That puts him in the top 17 percent of all NBA players. Most impressive, however, is the fact that Shumpert forces turnovers 25.5 percent of the time when he guards isolation plays. Shumpert’s success comes from his quickness, long arms, active hands, and aggressive mind-set.

Shumpert’s quickness allows him to stay in front of his man, and once the offensive player looks to make a countermove, Shumpert puts his long arms to work, reaching and probing to get a piece of the basketball. Shumpert gets whistled for fouls 14.5 percent of the time when he defends one-on-one situations, so he could be a little smarter about when he reaches in, but the fact that he puts constant pressure on offensive players and will steal the ball from them if they don’t protect it makes Shumpert a very scary defender.

Klay Thompson is a fantastic shooter. On defense, however, he needs to be more aggressive. Thompson is very passive against isolation offense, and as a result he allows 0.774 points per possession, which puts him in the bottom half of NBA players. Even worse, Thompson fouls 12.9 percent of the time in one-on-one situations, and he doesn’t force turnovers at the high rate that Shumpert does. While Shumpert’s fouls come as acts of aggression, Thompson’s come from passivity.

Thompson doesn’t hold his ground when players drive at him. His first step is almost always backward. This gives the offensive player more space to gain steam and get by Thompson. Thompson must learn to stand his ground and still stay in front of his man. Until he figures that out, teams will isolate against Thompson to take him out of the game with foul trouble or just turn him into a defensive liability.

In the four games leading up to Monday night’s win against New York, Brooks scored 57 points. Unfortunately, he needed 58 shots to get those points. Brooks has been settling for too many 3-point shots. Out of those 58 shots, 20 have been 3s, and he has only made five of them. Brooks is a decent 3-point shooter when he has time to step into his shot. He’s not nearly as good when he shoots off the dribble, and those are the shots he was missing last week. His injuries might still be bothering him, but either way, Brooks needs to attack the rim if he wants to return to the rookie rankings’ top three.

Aside from his terrific post defense, which we covered last week, Leonard struggles on defense. Overall, Leonard gives up 0.894 points per possession. He’s in the bottom third of NBA defenders. Teams have started to realize that attacking Leonard off the dribble is the way to score against him. Against isolations and pick-and-rolls, Leonard allows a PPP of 1.00, placing him in the bottom 9 percent of NBA players. His size is an advantage when he defends the post, but that size hurts him on the perimeter against quicker wing players. Leonard needs to adjust to the speed of NBA ball handlers. Once he figures out how to stay in front of offensive players, he could become a truly scary defender.

Morris’ game has fallen off since his fast start to the season, but he still does two things very well on offense. First, he knocks down spot-up jumpers. His 45.8 percent shooting and 1.213 points per possession in spot-up situations puts him in the top 8 percent of NBA players. Morris also plays well in the post. Despite shooting 42.3 percent on the block, Morris posts a PPP of 0.897, which is in the top third of NBA players. He does this by getting to the free throw line 16.9 percent of the time when he posts up. Morris’ strength and his ability to use the pump fake allow him to get defenders out of position, draw contact, and earn free points at the line.

Walker should excel in transition. He’s fast, a decent passer, a great scorer, and creative with the ball. He just seems to have the right game to play up-tempo basketball. However, Walker struggles in transition, posting 0.894 points per possession on the break, which is among the bottom 16 percent of NBA players. The problem? Turnovers. Walker gives away the ball on 11.5 percent of his transition possessions. That is simply too much, and he needs to take better care of the ball when he’s on the break.

Biyombo’s defense earned him a spot in the top 10. He shows well against the pick-and-roll and he’s very good at closing out on spot-up jumpers. He also plays great weakside defense. His only major weakness as a defender is in the post, where Biyombo allows opponents to shoot 48.5 percent and score 0.953 points per possession. Those numbers put him in the bottom quarter of NBA players. This happens because Biyombo fouls 17.4 percent of the time in the post. When he defends on the block, Biyombo is way too physical before the entry pass is made. After the pass, he struggles with the verticality rule. If a defender keeps his hands straight up when a post player attempts to shoot, more often than not a foul won’t be called. Biyombo brings down his arms, and when he does that, defense that wouldn’t otherwise warrant a foul call becomes a whistle on Biyombo. Once he adjusts to this rule, his foul numbers should decline.