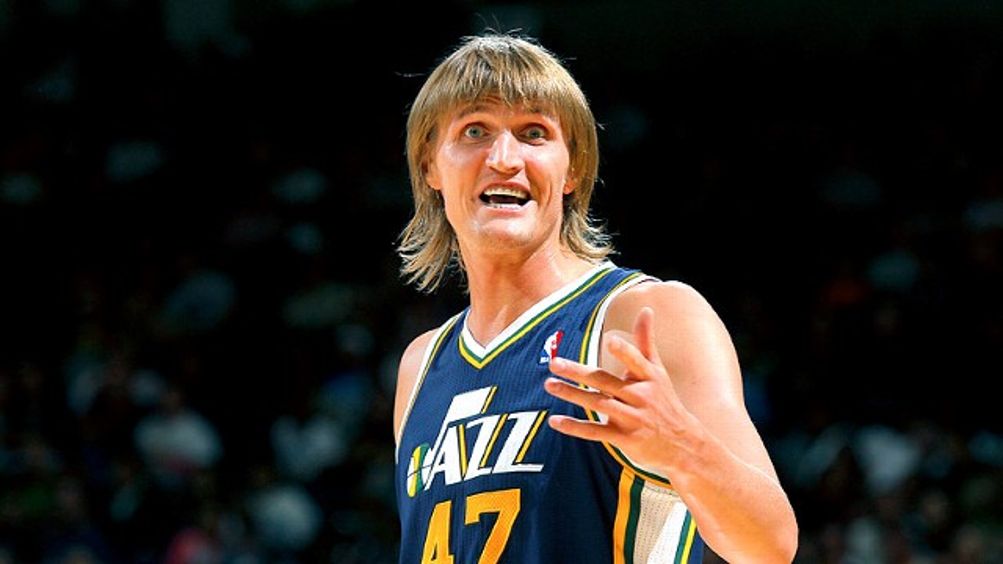 Gone are the days of short shorts and low tops, of crew cuts and hook shots, of Grant goggles and Hornaceks. The seemingly sterile NBA of the seventies and eighties was ushered out like a bottle of Crystal Pepsi, and replaced with a new class of athletes, and a very … different style.

The evolution would look something like a hill-country family tree, getting uglier as the generations progress: the Rodmans, the Sprewells, the Stephen Jacksons, the Delonte Wests. Bill Laimbeer had unknowingly given birth to a new kind of bad boy in the league, one that would be seeing a much different court than Hubert Davis.

Following the “Malice in the Palace” incident, the NBA was looking more deformed than a Sam Cassell–Scottie Pippen love child, and in an attempt to clean up the brand, David Stern implemented a dress code that would make a Catholic high school quiver. Criticism was harsh and players were outraged, especially Allen Iverson, who put it best: “You can put a murderer in a suit and he’s still a murderer.”

For a few weeks it seemed as though the NBA was gearing up for an 82-game Men’s Big and Tall commercial, however it wasn’t long before the players simply found a new way to express themselves … absurd tattoos.

Guns, wizards, Grateful Dead bears, obscure cartoon characters — nothing was off-limits in the race to cover every inch of viewable skin. The commissioner sat by and watched as sleeves became commonplace and Birdmen flew to new heights.

Most blogs seemed to take notice after last year’s infamous Andrei Kirilenko episode, in which the 6-foot-9 Utah Jazz small forward professed his love for Dungeons & Dragons by getting what is possibly the ugliest tattoo known to man. While people fixated on the Russian’s back tat, I scoured the rest of the league and discovered a good deal of laughable ink that was going unnoticed.

With the help of Alan Yang (writer/producer, Parks and Recreation) and Mehar Sethi (writer, It’s Always Sunny in Philadelphia), I was able to spot my top 10. (Click the players’ names to see their tattoos.)

Alan: The weird thing is that DeShawn has a tattoo on his chest of John Wilkes Booth firing a gun at neck Lincoln.

Mehar: When you play for the Nets it’s more about the Lincolns than the Benjamins.

Alan: This tattoo is also one of those Magic Eye things where if you stare at it the right way, you see the face of another, even more poorly drawn clown.

Mehar: Just try fitting this many tattoos into a clown car. Just try it!

Alan: Derrick Rose’s nickname is “Pooh” because he reminded his grandma of Winnie the Pooh. Fine. One of the variations on “Pooh” is “Poohdini.” Great. Here’s the thing: “Poohdini” is a word play using “Houdini,” who was not a wizard. Houdini was a magician. So why is this tattoo of “Poohdini” a wizard?! Poohdini should be a Hungarian-American magician with Winnie the Pooh’s head or something. Does anyone have Derrick Rose’s number? I promise I’m only going to use it to talk to him about the factual inaccuracies of his Poohdini tattoo.

Evan: “I asked for skeletons, not monkeys in a barrel!”

Mehar: “This tattoo will look just as cool when the acid wears off.”

Alan: “Why would I want a tattoo of just Mr. Peanut? What are you, stupid? Put a bunch of crazy Mayan-looking shit behind it, duh! God, do I have to do everything around here?”

Mehar: This is just a reminder for the medics that he has a peanut allergy.

5. Al Harrington’s “Himself Being Lifted by an Angel”

Alan: Is it true that Al drew this tattoo on his own back without being able to see a thing, thus resulting in the approximately first-grade level of art? No. He hired an actual first-grader to do the art. That’s the Al Harrington difference.

Mehar: No matter what the tattoo artist says, that angel will not improve your vertical leap.

Alan: This is like the 67th-best giant back tattoo of tertiary X-Men villain Juggernaut I’ve ever seen on an NBA backup small forward.

Mehar: Well, this tattoo’s more of a protest against steroid restrictions than anything.

Mehar: Those hands are praying for tattoo-removal technology to get better.

Mehar: This is the kind of tattoo that makes a man look distinguished when he gets older.

Alan: “What’s something that will permanently bum out anyone who sees it? Yeah, put that on my body forever.”

Mehar: Who needs an inspirational speech from Doc Rivers when you can just look down at this?

Evan Winiker is a screenwriter and musician who has played in the bands Steel Train and Fun. He has also written for Esquire.com and Relix and is a die-hard Nets fan. No, that is not an error: a Nets fan.

Alan Yang is a writer/producer on NBC’s Parks and Recreation as well as an avid basketball enthusiast.