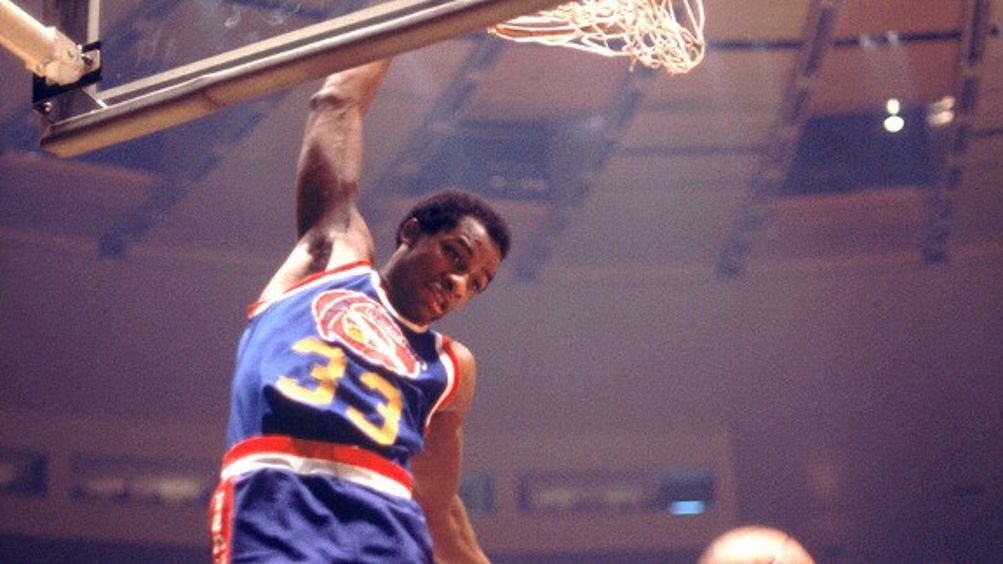 I knew he was good. As a 14-year-old sophomore, David dominated the cocky senior who starred for our archrival and who was supposed to be the conference’s best player. In pickup games around our one-stoplight town of Boiling Springs, no one, usually no two, players could stop him. Only his older brother Vallie came close, his brotherly gift of goading forcing David into an occasional bad shot. I had seen him dunk the ball from a standing start — doing it despite being just 6-foot-3 and with hands so small he couldn’t palm the ball. Yes, I knew he was good, already better than any of us would ever be, ever could be,1 but it wasn’t until David played a late-night pickup game at our town’s small college that I had my Road to Damascus or, I should say, Road to the Final Four moment.

A few years ago I mentioned to a colleague that both Earl Scruggs and David Thompson grew up in Boiling Springs. There must be something special in that spring water, he’d said, and quipped that the way Thompson jumped it must have included some rocket fuel. I told him it was more likely dynamite.

If you read local histories of Boiling Springs and then-Gardner-Webb College, you will find no mention of the ill-advised use of dynamite. Even today, seven decades later, older residents are reluctant to talk about what occurred. The exact details are sketchy, but the essence is that during the 1940s, the town fathers wanted to promote the “boiling spring” (there was actually only one) as a major tourist attraction, a Southern version of Yellowstone’s Old Faithful. The only problem, a rather significant one, was that while Yellowstone’s geyser boiled up 50 feet, the town’s spring topped out at 24 inches — on a good day. Enter Boiling Springs High School’s chemistry teacher. The novelist in me loves to imagine this scene: The town elders gather in a classroom as the eccentric teacher begins to clutter a chalkboard with formulas and symbols. His listeners are skeptical at first, but slowly they are won over by the periodic table’s arcane vocabulary. After finishing at the board, the teacher corroborates the future spring’s height and velocity with his slide rule. Then he lets the town fathers pass the slide rule around so they can see for themselves that what is being proposed is not a theory but a mathematical fact.

Whatever was said or shown that day, the plan passed. A time was set, the required materials gathered. Most of the town fathers were storeowners or landowners, so surely visions of crowded stores and land booms filled their heads when, days later, the chemistry teacher planted dynamite sticks in and around the spring. I’d like to think that shortly before pushing the detonator, the mayor made a speech about the necessity of progress. After the smoke cleared, the boiling spring, now not even a gurgle, lay flat and calm as water in a sauce pan. It has remained that way ever since.

The stilled spring was only 30 yards from the college gym where, in 1970, hubris was punished yet again. During the summers, Gardner-Webb, a perennial NAIA power, held two weeklong basketball camps. Kids from 8 to 18 came from around the Carolinas, getting instruction from college coaches and players and, occasionally, pros. This particular year it was Skeeter Swift, a guard for the ABA’s New Orleans Bucs. Every evening after dinner, these players chose up for 5-on-5 games. Anyone from town could watch, and my brother and I often did. This night David showed up, too, wearing blue jeans, a white T-shirt, and canvas basketball shoes.

Gardner-Webb’s coach was already recruiting David, and he or someone on his staff wanted to see how this 16-year-old2 competed against seasoned college talent. There was no air-conditioning in the packed gym, only huge fans that whirred above like hovering helicopters. The July heat and humidity had even the spectators sweating, but David was on the court in long pants, outplaying the collegians attempting to guard him. Pouring sweat, he still made it look not so much easy as inevitable. It was simply whether David wanted to go above or around the other player to score.

Perhaps it was also inevitable that Skeeter Swift switched over to guard David. It may or may not have been Skeeter’s idea to do this, but regardless, David found himself facing a professional basketball player. Skeeter, as he notes in his autobiography, was a trash-talker on the court and always supremely confident.

If the idea was to teach a lesson in humility, one was given, but not to David. Skeeter talked to David, bumped him, grabbed him, did everything but stop him. Just as with the college players, David had his way. How good? This good, was the answer. In fairness to Skeeter, he may have been torching David on the other end of the court. He was an amazing shooter, his free throw percentage among the best in the ABA’s history. But my focus was on David nailing jump shots or gliding in for layups (no dunking allowed in 1970), making it look effortless, even glorious. By the end of the game, there was no doubt who the best player in the gym was.3

There would be many other times when David showed me how good. His sophomore year at NC State, he scored 37 points in a nationally televised game against a Maryland team led by Tom McMillen, John Lucas, and Len Elmore. The next year, NC State beat one of John Wooden’s greatest UCLA teams in the Final Four. David had 28 points, though what I remember most about that game was his rocketing upward to block Bill Walton’s shot. NC State went on to beat Al McGuire’s Marquette team for the NCAA championship. Other times came in the NBA, especially the last game of the 1978 season, when he scored 73 points, including 32 in the second quarter, losing the NBA scoring title by a fraction of a point. In 1978, he re-signed with Denver for a five-year, $4 million deal, at that time the largest contract in basketball history.

Another later, less sanguine moment, however, came in 1983 when David played for his last team, the Seattle SuperSonics. Even on a 14-inch black-and-white TV, I could see something had gone wrong. His play was lethargic and he had clearly lost weight. Rumors about alcohol and cocaine were soon verified, addictions leading to a career-ending injury suffered not on the court but in a Studio 54 stairwell. By the late 1980s, David was out of the league and broke.

In the past few years he has made a comeback. The man Bill Walton describes as once being “Michael Jordan, Kobe Bryant, Tracy McGrady, and LeBron James rolled into one” now lives in Charlotte, just a few counties east of where he grew up. He’s off drugs and alcohol, and is a popular motivational speaker along with doing events with the Denver Nuggets and the Charlotte Bobcats.

Although he’s not often mentioned with players such as Oscar Robertson, Michael Jordan, Larry Bird, or Magic Johnson, David’s impact on the game places him in their company. Michael Jordan himself notes that “the whole meaning of vertical leap began with David Thompson.” The ultimate accolade may have come in 2009 when Michael Jordan, the game’s greatest player, chose David to introduce him at his Basketball Hall of Fame induction.

I haven’t seen a lot of David since high school, but we occasionally cross paths, including at a book festival where he was signing and promoting his autobiography, Skywalker, and I a new novel. Although David was a better student than I, neither of us had won any academic awards,4 so it amused us that we’d ended up being the only authors in our graduating class. We also spoke of how driven we had both been as high school athletes, and how that sense of purpose had continued through the years and into different pursuits.

I have one more memory, my favorite, though it took place on cinders instead of hardwood. I was never good enough to play on a basketball team with David, but we did run track together, both members of a 4×4 relay team good enough to place in the state meet. This, too, was a humid evening, but two weeks before our high school graduation, and not in Boiling Springs but nearer to the state’s center. David ran the third leg and I ran the fourth. Here’s the way I will remember it: David is out of the last turn and coming toward me, the hollow metal baton in his right hand. As he nears, I start running and reach my hand behind me. The baton settles in my palm, and for a moment we both hold it — two small-town kids who cannot imagine what they will achieve and what they will lose, but headed into that future, for a moment, together.

Ron Rash has published 12 books of fiction and poetry. His new novel, The Cove, will be published in April 2012.