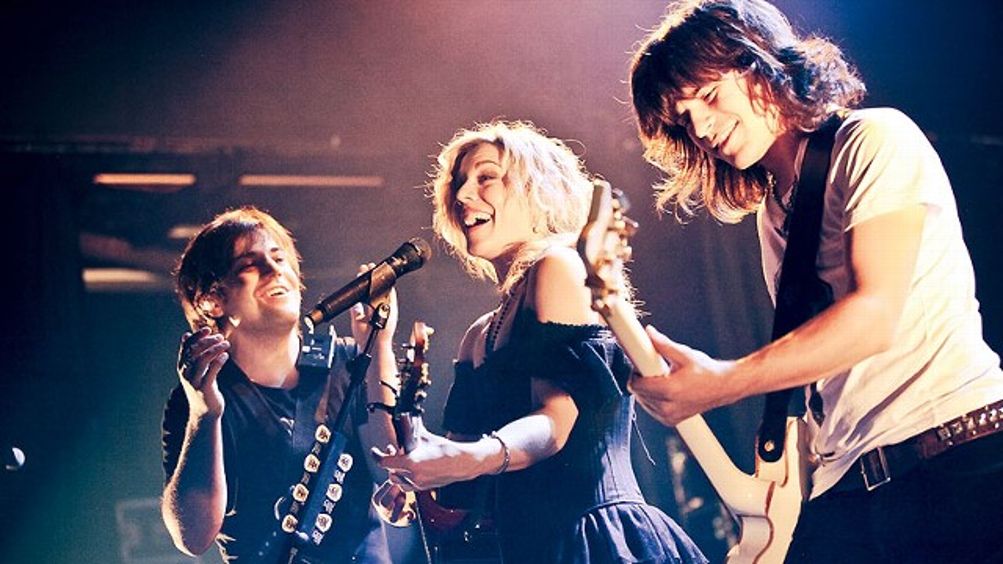 Near the end of “I’m a Keeper,” a song from the Band Perry’s new Pioneer, the country trio’s brassy, husky-voiced front woman, Kimberly Perry, steps away from a maelstrom of squealing guitars and martial drum blasts to break the fourth wall and directly address the listener, the way girl-next-door types do. “I’m doin’ my own thing!” Perry says, with (one imagines) her head held at a sassy tilt and a hand placed on her hip in a no-nonsense fashion. This moment — equal doses disarmingly plainspoken and carefully calculated — helps to explain why the Band Perry is one of the most popular groups in America. The Perry siblings (brothers Neil and Reid round out the family act) have come too far since the release of their platinum-selling 2010 debut to leave anything to chance. “Literally after every single show, we watch the video of that show like a game tape to see what we can do better,” Neil recently told Billboard, adding that each track on Pioneer was (literally) rewritten four times before being committed to tape. Rarely is the act of “doin’ my own thing” plotted out so meticulously.

Even if you’re not regularly switching over to the country music station as a post-office salve on the drive home from work, there’s a chance you’ve heard of the Band Perry. The group’s breakout hit, a musically pleasant and lyrically morbid country-folk paean to the upside of a premature demise called “If I Die Young,”1 was a substantial hit on pop radio, peaking at no. 14 on Billboard’s Hot 100 in 2011. On the country charts, “If I Die Young” was a monster, going to no. 1 and surpassing 4.5 million downloads in the U.S., making it one of the best-selling country songs ever. (It also topped the adult contemporary chart.) “Young” was the first of four top-10 country hits spawned by The Band Perry, a modest but durable blockbuster composed of breezy, strummy tunes played on acoustic guitars and banjos — precisely the sort of purposefully pared-back instrumentation that was suddenly trendy in a post–Mumford & Sons pop world.

The Band Perry was hardly a left-field smash; the group was discovered by Garth Brooks’s manager, and the album’s influences — the Dixie Chicks and early Taylor Swift, mostly — have been the lingua franca of tremendously successful Middle American pop music going on nearly two decades. But Pioneer represents a full-tilt shift into flagship country-superstar mode: In the aftermath of Swift assuming pop’s center with 2012’s Red by openly courting a patchwork of constituencies outside the country niche, the Band Perry has dropped the humble boots–and–bolo ties routine in order to embody all that is glitzy, blustery, blow-dried, and market-tested about the genre circa 2013.

The Perrys are still traditionalists at heart, only now they’re paying homage to Garth and Shania’s arena-jocking jams of the ’90s. The specter of Shania’s ex-husband/Svengali Robert John “Mutt” Lange lurks inside “Forever Mine Nevermind,” which opens with a fanfare of spotless a cappella harmonies that nod to the parking-lot populism of Styx and REO Speedwagon — as well as fun.’s “Some Nights” — before Perry affects her spunkiest Pat Benatar sneer over Brian May guitar licks on the kick-ass “na na na” chorus. (Take a bow, cowriter Brad Paisley.) Everything on Pioneer is intended to elicit the maximum emotional response in a minimum amount of time. The latest single, “DONE,” pushes the country sound to the periphery in favor of a funk stomp. On the ballad “Don’t Let Me Be Lonely,” the fiddles ring out like synths around Perry’s powerhouse emoting, finally giving way for a searing, levitate-all-asses-from-their-seats guitar solo. If the uplifting musical cues don’t work, then heart strings will be pulled — and if pulling isn’t enough, they will be throttled, even if it requires calling on the power of God (on the “Is it about a dude or Jesus?” love song “I Saw a Light”) or Mom (on “Mother Like Mine,” in which Perry sings that “we’d walk on grass that’s greener / and our cares would all be freer / if the world had a mother like mine” — and, yes, you’re a sociopath if you’re not already tearing up). The Band Perry do not hedge any bets on Pioneer; in fact, the band’s trying to buy the whole damn casino.

It wasn’t always supposed to be like this: For Pioneer, the Band Perry planned to work with Rick Rubin, the necromancer of naturalism. The initial idea, surely, was to make a sophomore record that emphasized the rustic aspects of the debut rather than its formulaic pop side. But in the end, the Band Perry opted to hire Dann Huff, a Nashville insider from the Rascal Flatts–Keith Urban school of record production. Under Rubin’s tutelage, the lilting title track likely would have emphasized a sound as homey and rough-hewn as a small-town general store; instead, it’s like Cracker Barrel’s heavy-handed approximation of a general store. That’s not a knock on Huff — he’s done right by a band that clearly wants its sound to match the size of its record sales and concert venues. (And Pioneer still came out pretty golden.) Pioneer is exactly what it’s supposed to be. The Band Perry has made The Album Highly Commercial. 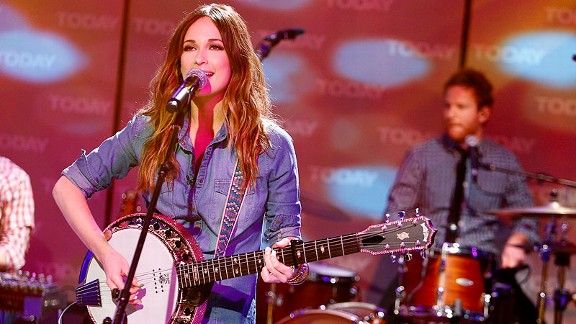 Pioneer ends with a song called “End of Time,” a cloudy stew of shopworn Southern staples — sweet tea, cotton, Alabama moons — and the petty resentments of those left behind in dying towns. Perry begs an unidentified person who’s out there “living it up” to come back home, because the time for selfish dreams is over. When she sings “somewhere out there you’re finding yourself,” it’s an accusation; the implication is that this town is “real” and the world outside isn’t, and at some point you have to accept that your place in the world might be the same mundane, downtrodden hunk of dirt where you originally landed.

As a song about small towns, “End of Time” is unintentionally depressing. As a parable about the country music industry, it’s incredibly insightful. Two albums released last month — Kacey Musgraves’s Same Trailer Different Park and Ashley Monroe’s Like a Rose — represent the counterargument to “End of Time,” portraying rural America as an oppressive, dead-end expanse of hopelessness and addiction that you’d only ever want to visit (or revisit) in a country song. Just as Musgraves and Monroe sing about transcending the preordained fate of the frustrated heartland striver that Perry seems resigned to living out, their albums seek an audience that exists beyond country’s rigid parameters. They are both — consciously or not — trying to reach people who would never listen to the Band Perry.

Because they released critically adored albums that share similar strands of classicist DNA (and also because they both happen to be twentysomething females with a history of career false starts),2 Musgraves and Monroe are often packaged together in the media.3 Musgraves has the edge over Monroe so far in terms of outsider cred, though you wouldn’t know it by her music, which recalls the easygoing pop of the Band Perry’s debut. Musgraves’s critical rep is based on her willingness to rankle the establishment — or, rather, pander to what Blue Staters like to believe rankles typical country music fans. The pro–gay rights song “Follow Your Arrow” does seem genuinely progressive in this regard, though Musgraves’s jokey execution (her support of girls kissin’ girls comes with a Seinfeld-eque “if that’s something you’re into” kicker) somewhat defangs its sentiment. I admit I was drawn in at first by the central conceit of Musgraves’s songs, that their surface sweetness is a Trojan horse for supposed insight. But upon closer inspection, Musgraves’s words don’t add up to much beyond glib quips (starting with the Foxworthy-worthy album title, taken from the breakout single “Merry Go ‘Round”) and second-hand “Jack & Diane”–isms.

Musgraves’s primary subject matter is the closed-mindedness of small towns — and, less directly, how country music glorifies what shouldn’t be glorified about those towns. While Musgraves has her moments as a sketcher of evocative details, like the vignette in the bluesy “Blowin’ Smoke” about waitresses gossiping about whether the coworker who shipped off to Vegas will return home chastened, her songwriting leans too heavily on weak-to-awful one-liners about bees making honey and Jack and Jill going up the hill. After three or four listens of the overpraised “Merry Go ‘Round,” its initial appeal as a light and hooky folk-pop song about working-class ennui wore off, and I’d had just about enough of its keening Mary Kay/Mary Jane puns about Kacey’s broadly rendered white-trash archetypes. I like Same Trailer most when it’s most like Pioneer, delivering fluffy, low-stakes songs like “My House,” yet another trailer park ditty — we get it, you might be a redneck — where Musgraves invites you to “come on, hitch your wagon” over a relaxed, tossed-off shuffle.4 But for a record that’s been pitched as a genre game-changer, Same Trailer Different Park feels awfully slight. 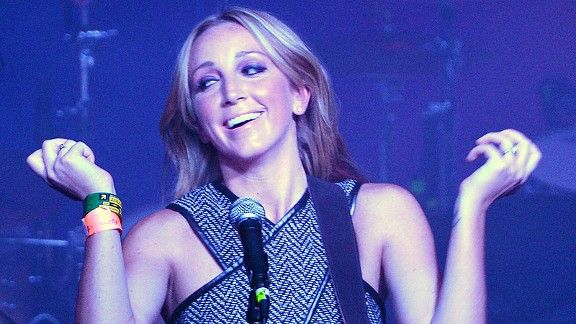 Monroe’s album, on the other hand, is a magical sleight of hand, presenting nine songs that sound as overtly old-school in their steel guitars–and–broken hearts orthodoxy as an early ’00s Ryan Adams record, while also offering an authentic depiction of a thoroughly modern woman’s experiences with long-lost deadbeats and dalliances with lifetime consequences. Like a Rose has its share of cornball humor — the whipped cream and whips that liven up the flatlining marriage in “Weed Instead of Roses,” and the 50 Shades of Grey reference dropped by Blake Shelton like a boob joke at a Pamela Anderson roast in the otherwise charming duet “You Ain’t Dolly (And You Ain’t Porter).” But at its best, Like a Rose has a gravity, and Monroe a gravitas, that Same Trailer and Musgraves lack.

The album covers the usual hard-luck bases: Monroe drinks too much on “The Morning After,” resorts to a life of crime on “Monroe Suede,” and fights a losing battle for her man against another woman on “She’s Driving Me Out of Your Mind.” As one of the two-fisted broads in Pistol Annies — she and Angaleena Presley are the less famous counterparts to Miranda Lambert — Monroe already boasted solid credentials in the “songs about whiskey drinkin’ and butt kickin'” department. Where Like a Rose builds on Monroe’s reputation is as a literate songwriter of uncommon sensitivity and specificity. The album-opening title track is a life-spanning story song that recalls the narrative sweep of “Me and Bobby McGee,” with its novelistic table-setting (“I was only 13 when Daddy died / Momma started drinking and my brother just quit trying”) rolling out of North Dakota and to destinations unknown over warm washes of honeyed guitars and a quietly snappy rhythm section. Even better is “Used,” which piles on the metaphors — books with broken spines, dancing shoes with worn-out soles — to describe a person redeemed by her own damaged psyche because it’s made her more amenable to a newfound love.

Among the credits included in the liner notes for Like a Rose — Monroe, like Musgraves, is listed as a writer on every track of her album — is a familiar name: Shane McAnally. Not only did he cowrite Like a Rose‘s fantastic Tammy Wynette–style out-of-wedlock pregnancy song “Two Weeks Late,” he’s also one of the writers of Musgraves’s “Merry Go ‘Round” (and a producer of Same Trailer Different Park) and also a writer behind “Better Dig Two,” the no. 1 single off of Pioneer. It’s a reminder that, no matter where you come from or which direction you want your career to go, Nashville is the ultimate small town.