Back on the Block With Method Man 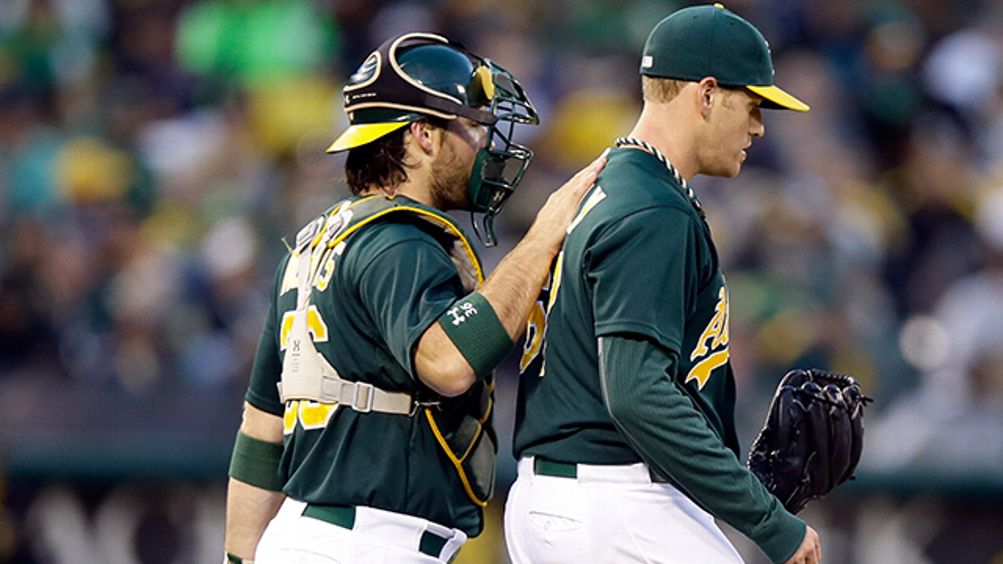 Please forgive the indecisiveness of this weekend’s rankings. It’s tough to take a strong stand when Waffling is so much fun.

You can find a whole bunch of reasons for the A’s success since the start of last season. They improved their offense, leveraging everything from frequent platoons to improved baserunning to shrewd player acquisitions. They’ve built a deep and talented bullpen without breaking the bank for a Proven Closer. They’ve played very good defense. And in a development few expected, they traded away rotation mainstays Gio Gonzalez and Trevor Cahill and somehow got better.

The emergence of multiple previously untested pitchers last year played a big role in Oakland’s surge to the AL West title. Jarrod Parker turned in a terrific rookie season, posting a 3.47 ERA and 3.43 FIP and tossing 181⅓ innings. Tommy Milone, considered a secondary piece in the Gonzalez trade with the Nats, produced a 3.74 ERA and 190 innings pitched in his first full season. In-season call-up A.J. Griffin made 15 starts and delivered a 3.06 ERA.

The Rangers deserve lots of credit for a big winning streak that has vaulted them to the top of the AL West standings. But if you want to know why Oakland has played just .500 ball over the past month, losing its grip on first place, look no further than the poor performances turned in by the team’s young starters.

In his past four starts heading into the weekend, Griffin allowed a staggering 10 home runs — somewhat a byproduct of pounding the zone, since he had also struck out 24 batters against just four walks. He straightened that out Sunday in Toronto, allowing no homers but also a career-high six walks, with multiple hanging curveballs resulting in big hits, too. Dan Straily, in his first full season as a big league starter, has allowed a 4.95 ERA and an opponents’ OPS of .854 over his past four starts, and hasn’t made it out of the fifth inning in his past three. Milone pitched so poorly that he got banished to the minors, and the buzz is that he’s not coming back unless Oakland needs a long reliever or just a body for September roster expansion. So the A’s now head down the stretch with rookie Sonny Gray (A’s first round pick in 2011) taking Milone’s spot in the rotation, Straily and Griffin remaining question marks, and even the until-then-untouchable Bartolo Colon coming off an annihilation in Cincinnati.

Contrast that with the Rangers’ starting five, which has Yu Darvish and Derek Holland both pitching like aces, Matt Garza as possibly the biggest pitching acquisition at the deadline,1 and Alexi Ogando back in action. Texas doubled down by scooping Alex Rios off the waiver wire last week, capping an excellent show of patience in which the Rangers knew Nelson Cruz was getting suspended, shopped around for outfield help before the non-waiver July 31 deadline, balked at giving up their best prospects, then finally used their financial muscle (and very little else) to get a fine replacement in Rios. Other than what has happened with the Dodgers, you could argue that no team has improved its fortunes quicker than Texas, which reportedly was entertaining both buying and selling possibilities as recently as a couple of weeks ago.

Oakland will have every opportunity to make it back to the postseason. But given the upgrades the Rangers have made and the question marks surrounding three-fifths of the A’s rotation, you have to consider Texas the favorite to reclaim its AL West crown for now.

A topic we’ve broached frequently over the past couple of weeks is the decision clubs face at the trade deadline when they’re unlikely to make the playoffs. The usual mantra is to trade away any veteran who doesn’t figure to be part of the next winner. But it’s a bit facile and presumptuous to say that. For one, other teams might offer lousy players in return. For another, making your team worse can alienate your fan base and erode future revenue streams, making even a couple of sells during a lost season something of a risk.

The Jays faced this dilemma leading into the July 31 deadline, and at least in theory still face it in August. One of the most disappointing teams in baseball sat (and still sits) well below .500, with basically no shot of even sniffing a playoff spot. Then you start going through the roster. The most prominent free-agent-to-be is Josh Johnson … only no one’s going to touch a pitcher who now has a 6.20 ERA2 and is still owed the prorated portion of a $13.8 million salary. Several other high-priced veterans populate the roster, but all of them were iffy trade candidates, for different reasons. Mark Buehrle isn’t nearly good enough to justify the $39 million he’s owed over the next two seasons. Few teams would be able or willing to soak up four years and $82 million worth of Jose Reyes, much less give up premium prospects for him. Trading R.A. Dickey would be selling low on the 2012 NL Cy Young winner. Jose Bautista and Edwin Encarnacion would generate tons of interest, given they’re two of the best power hitters in the game and also signed to bargain contracts by today’s standards … but that’s exactly why the Jays would want to keep them.

More broadly, it’s entirely possible that the Jays are a pretty good team hiding inside a terrible season. It’s easy to say now that all the Toronto hype was overblown last winter, that being installed as early World Series favorites didn’t make much sense given the question marks surrounding the roster, even after GM Alex Anthopoulos’s buying spree. But it’s also possible the Jays are experiencing something similar to the fate suffered by the 2012 Red Sox: a first-percentile outcome where everything that could go wrong has gone wrong.

You can lay most of the Jays’ problems at the feet of their terrible run prevention; only the Astros have allowed more runs this year. You’d be tempted to blame Toronto’s pitchers for that, given how disappointing Dickey and Johnson have been — Brandon Morrow, too, at least when he’s been healthy enough to pitch. But the Jays’ defense has exacerbated those problems. This year, Toronto ranks 25th in team UZR, after ranking 22nd last season.

Players like Melky Cabrera, J.P. Arencibia, Emilio Bonifacio, and Maicer Izturis have delivered a deadly combination of terrible hitting and ugly fielding this year. Replacing them with even half-decent players would cost a lot less than shopping for superstar free agents — and potentially help just as much, given the putrid results of the players they’d be ousting. It could also trigger a big comeback for the Jays in 2014.

With Alex Rios passed through waivers, claimed, and traded to Texas, the next likely significant name to change teams in August might be Justin Morneau.

The Twins’ first baseman is still owed a little more than $4 million for the duration of this season and is a free agent at year’s end. He’d be a good fit for several contenders, especially the Orioles, who looked into Morneau before the non-waiver deadline, are currently carrying struggling rookie Henry Urrutia at DH, and have an owner who can light his cigars with million-dollar bills thanks to his huge stake in lucrative regional sports network MASN. Unfortunately, the restrictive nature of the waiver-trade period means a lot would have to happen for a team like Baltimore to land someone like Morneau. Teams lower in the standings with designs on a playoff berth themselves would get an earlier crack at claiming him. In that scenario the claim could end up being merely a block, or the Twins could relinquish Morneau’s rights and stick the claiming team with the rest of his contract, without getting anything else in return.

The best-case scenario, of course, would be that the Twins pocket savings from Morneau’s contract and also collect some kind of quasi-useful prospect as part of a trade. Because unlike the Jays, the Twins are in full rebuilding mode, years away from becoming a contender.

Still, there’s an exciting future here, even if it might take a while to arrive. No team boasts a better pair of position-player prospects than the Twins’ tandem of 20-year-old power-hitting third baseman Miguel Sano (.297/.397/.622 with 28 homers in 102 games between high Class A and Double-A ball this year) and 19-year-old five-tool center fielder Byron Buxton (.319/.402/.522 at two levels of Class A this year, with 45 extra-base hits and 41 steals in 102 games). Twenty-two-year-old Oswaldo Arcia has also delivered an impressive rookie season, hitting .258/.312/.447. Between Arcia, Buxton, and Aaron Hicks, there’s an extremely promising starting outfield that could be playing together in the big leagues as early as 2015. Add Sano at a corner-infield spot and the great Joe Mauer (under contract through 2018 and one of the best and most unfairly maligned players in the league3), and this could become a fearsome lineup. They’ll still need to fill up the infield and especially develop a competent starting rotation that’s better than the junkballing schlubs they have now. But for the first time in three years, you can at least start to be optimistic if you’re a Twins fan.