No Playoffs, No Problem 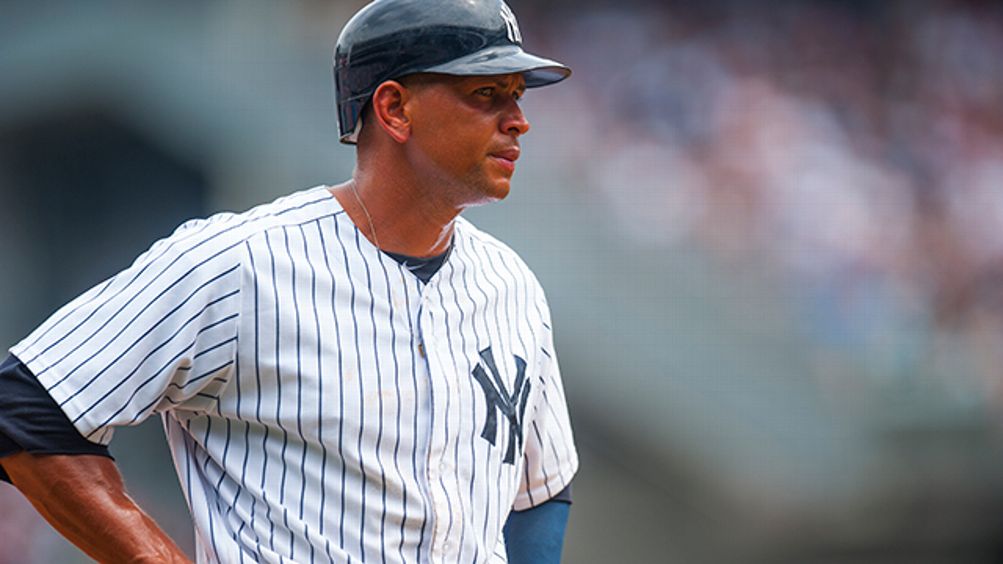 Commissioner Bud Selig elected not to deploy the collective bargaining agreement’s “best interests of baseball” clause and suspend A-Rod for life, despite rumors that such a lifetime ban might occur. Instead, MLB announced a suspension that would knock Rodriguez out for the rest of this season, the 2013 playoffs if the Yankees were to make it, and all of 2014. The Major League Baseball Players Association reportedly tried to strike a deal today, but according to ESPN’s T.J. Quinn, those efforts were rebuffed. Rodriguez appealed the suspension, which will be ruled on by independent arbitrator Fredric Horowitz. In the meantime, Rodriguez is expected to play for the Yankees, starting tonight at U.S. Cellular Field against the White Sox.

Rumors had surfaced that other players could get suspended as well. But MLB elected not to punish A’s starting pitcher Bartolo Colon, Padres catcher Yasmani Grandal, and Blue Jays outfielder Melky Cabrera, since all three had already served 50-game suspensions that started last year. Two other players named in reports, Nationals starter Gio Gonzalez and Orioles utilityman Danny Valencia, were found not to have committed any violations of the Joint Drug Agreement and are now in the clear.

The suspensions of Cruz and Peralta figure to have the biggest impact on current playoff races. The Tigers lead the AL Central by three games, while the Rangers trail Oakland by 2½ games in the AL West and are also locked in a fierce wild-card race. As we noted in this week’s edition of The 30, Detroit did an excellent job of anticipating Peralta’s suspension and positioning themselves for the next five years, acquiring Jose Iglesias in the three-way deal with the White Sox and Red Sox that also sent Jake Peavy to Boston. Texas failed in its quest to land a slugger to replace Cruz and his 27 home runs, however, weakening a middle-of-the-pack offense — though the Rangers did acquire Matt Garza to bolster their already strong starting rotation.

Both Peralta and Cruz are eligible for free agency after this season, so accepting suspensions now made sense on a personal level, even if their current teams could suffer for it. Both the Tigers and Rangers could face tough decisions in October, though. Peralta and Cruz would both be eligible to play for their teams if Detroit, Texas, or both make the playoffs. Facing a similar decision last fall, the Giants elected not to have Melky Cabrera play for them in the postseason and went on to win the World Series without their .346/.390/.516–hitting outfielder.

Rodriguez’s case holds the most intrigue, though, for multiple reasons.

In calling for a 211-game ban (it would take effect on Thursday), MLB is attempting to impose its longest suspension ever for a player suspected of PED-related offenses. An overreach in the form of a lifetime suspension triggered by the CBA’s “best interests” clause might have set up a clash with the players union that could have had far-reaching effects, including more contentious negotiations before the current CBA expires on December 1, 2016, and the two sides go in to negotiate a new one. A “best interests” ruling might have created the (entirely accurate) perception that the league wasn’t granting Rodriguez due process in this case. It might have created legal complications, too, which labor lawyer Eugene Freedman eloquently outlines in this excellent Hardball Times post on A-Rod, the JDA, and the CBA.

Given that the JDA clearly outlines suspensions as 50 games for a first PED-related offense, 100 for a second, and a lifetime ban for a third, Rodriguez has plenty of grounds to appeal. Thanks to MLB leaks, we have countless reports that the league supposedly has overwhelming evidence of Rodriguez’s transgressions, including text messages to Biogenesis founder Tony Bosch promising to exchange money for PEDs. A-Rod has admitted to using PEDs from 2001 through 2003, when he played for the Rangers. But he has never been suspended for a failed test, possession, or any other PED violation, thus setting up a 50-game ouster as the JDA-sanctioned punishment for a first offense.

Of course, MLB has decided once before not to stick to the letter of the JDA on that front. The league suspended Ryan Braun two weeks ago for 65 games. Braun had failed a drug test in 2011, but avoided suspension after arbitrator Shyam Das upheld the Brewers outfielder’s appeal, which cited improper actions by urine sample collector Dino Laurenzi Jr. In theory, then, MLB only had grounds to suspend Braun for 50 games for his Biogenesis-related violation. But the two sides agreed to a season-ending 65-game suspension instead, with MLB announcing merely that Braun had been found guilty of “violations of the Basic Agreement and its Joint Drug Prevention and Treatment Program.”

The Braun suspension, and the one Rodriguez now faces, raise multiple questions. Is the JDA now obsolete, given that Major League Baseball can apparently impose more than the prescribed punishment for first-time offenders? Will future suspensions be subject to extensive negotiations involving MLB, the player, and the union, rather than following the steps negotiated by all sides during past rounds of collective bargaining? Moreover, what constitutes something more than a typical first offense? Making multiple orders for performance-enhancing drugs? Denying those purchases to MLB? Offering money to prospective witnesses in a pending PED case, because it’s fine for baseball to cajole witnesses, but if a player does so he might be subject to a lifetime ban?

If you want a reason to cheer Rodriguez’s appeal (and you’re not a Yankees fan), consider that MLB’s evidence is now far more likely to be revealed than if the two sides had simply negotiated an agreed-upon suspension, thus likely answering many of these questions. Had the league and Rodriguez settled, we’d likely be left in the dark as to the full extent of the player’s violations, the way we were with Braun. Here, the public stands a greater chance of learning exactly what MLB has on A-Rod, and thus how it might interpret future violations by other players when it seeks suspensions of various lengths.

It is truly one of the great coincidences of our time that the two most famous players implicated in the Biogenesis case, including the least likable one, happen to be facing steeper penalties than anyone else involved. Consider the extent to which baseball lucked out here. Every player suspended in this case was found guilty of just a single PED violation, except for:

• Braun, a player the league had been trying to nail for a year and a half for what it perceived as a technicality, especially after he lied repeatedly about his PED violations, and …

• Rodriguez, one of the most mocked athletes in the history of sports, a player who had been ridiculed for everything from having an image of an A-Rod centaur in his bedroom to his taste in women to his methods of avoiding tags to his general narcissism to his widely suspected but never proven use of performance-enhancing drugs.

For everything to line up so perfectly in baseball’s favor, you’d have to call this one of the greatest strokes of PR-related good fortune in the annals of Western civilization. After all, there’s no way MLB would pursue certain players more doggedly because it believed the court of public opinion would tilt in its favor if it did so.

As things stand, a suspension lasting 200-plus games stands to both hurt the Yankees and greatly benefit them. New York currently sits 4½ games out in the chase for the second wild-card spot. Given the terrible players the team has installed at third base in Rodriguez’s stead this year, even a gimpy 38-year-old coming off a long absence would stand a good chance of producing more value for the team.

On the other hand, a suspension lasting as long as has been proposed would save the Yankees about $34 million. More than just saved salary, that money wouldn’t count against the team’s luxury tax threshold. That could open the door for the Yankees to aggressively pursue a variety of high-priced players, ranging from re-signing Robinson Cano and Hiroki Kuroda to courting free agents like Shin Soo-Choo, Jacoby Ellsbury, Matt Garza, Carlos Beltran, Brian McCann, Hunter Pence, and others. They could also look into trades for high-priced players the way the Dodgers did last summer (or more likely, something not quite that ambitious). As things stand, the Yankees have only seven players under contract for next season, including Rodriguez, with a total committed payroll of about $89 million — not counting multiple other players under team control who’ll be eligible for arbitration or renewals. Ditch A-Rod’s salary and you could, say, pay full freight to outbid L.A. and other potential suitors on Cano, bring back all or most of your team-controlled players not under long-term deals, and still fill out the rest with quality talent … all the while ducking under next year’s $189 million luxury tax, thus saving tens of millions of dollars, now and in the future.

There’s one last sad element to this story, one that goes beyond unequal treatment of players depending on their nailability factor, keeping settlement details private so that the public can’t see what actually happened, and burnishing Bud Selig’s reputation as he prepares to leave the game: Sometime soon, Rodriguez will likely play his final game.

Just as we lamented the end of the line for known performance-enhancing amphetamine users Hank Aaron (see page 268) and Willie Mays, I’ll be doing the same for A-Rod. Whether chemically enhanced like Aaron, Mays, and 19th-century pitcher Pud Galvin or clean, Rodriguez was a breathtaking player to watch, one of the greatest of all time. He won three MVP awards and probably deserved at least three more, having led the American League in Wins Above Replacement six times. He was a five-tool player manning the toughest non-catcher position in the game, coming up with fellow shortstop stars Derek Jeter and Nomar Garciaparra and putting up numbers that dwarfed both of theirs.

Beyond the numbers and awards, A-Rod in his prime played with an unparalleled combination of power and grace. He cracked the big leagues at age 18. His first career home run, a monster blast on a hanging Tom Gordon curve, came at 19. He was a superstar by age 20, making spectacular plays at short, running like a deer, and swatting the ball into the stratosphere on a regular basis. Contrary to his reputation as a player who folded under pressure, he overcame tense situations such as wearing a Turn Ahead The Clock uniform, and also hoisted the Yankees on his shoulders throughout the 2009 playoffs, carrying them to a World Series title.

Alex Rodriguez and Barry Bonds were the two best and most electrifying position players of the past quarter-century. Bonds never played again after 2007, despite posting a gigantic .480 on-base percentage that year, slugging .565, and launching 28 home runs. Unlike Bonds, A-Rod is under contract with a major league team, so he can’t be swept under the rug for PED suspicion — at least not yet. Rodriguez might have cheated and he might have lied. But we will get to see one of the best baseball players to ever walk the earth, at least for a little while longer.

Maybe you’re like me and want to see an all-time great get his last licks in. Or maybe you simply believe in due process for everyone, no matter how vile you might find a person’s actions. Either way, A-Rod being in the lineup tonight in Chicago is a big win for baseball.