Speed Round with Joseph Gordon-Levitt 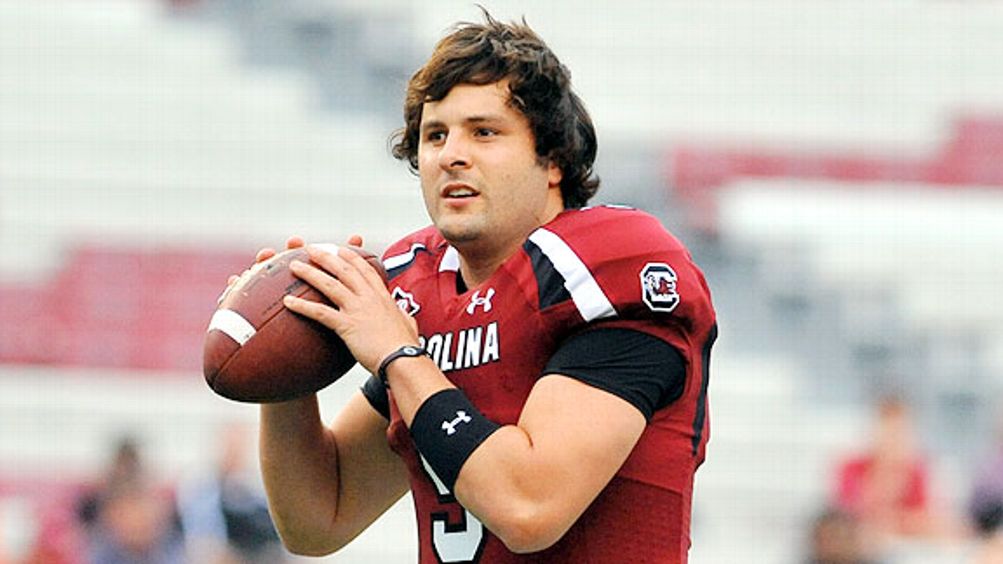 Enough of these goody-goodies timidly toeing the straight and narrow, putting pie-in-the-sky team goals ahead of the clear and present aspiration of getting mad fucked-up. You’re young, ladies. You’re in college. No children to rear or mortgages to keep pace with. A sense of humor is fine and dandy, as is the earning potential attached to a snooty degree from that book-readin’ geekery Vanderbilt University, but admit it: There’s nothing like a bad boy. There’s nothing like a Dylan McKay. There’s nothing like a Jordan Catalano. And there’s nothing like a Stephen Garcia. Nobody understands him — not the cops, not those alumni who don’t deserve him, not even the Ol’ Ball Coach, who used to flout a little convention himself. They’re all old, and your Stephen is young, young, young, and they’ll never change him no matter how short they cut his hair. He’s got an NFL receiver to throw to, an NFL tailback to hand off to, and a seeming desire to watch them from your cuddly couch for the next 10 years of Sundays. Like Randall “Pink” Floyd before him, your Stephen will never sign that paper. He’s too busy L-I-V-I-N. And as far as you’re concerned, little lady, they can go ahead and suspend him a half-dozen more times, because all that means is you get more of his attention — you and Captain Morgan, anyway. And don’t you hate that brown-nosing Connor Shaw, waiting for Stephen to screw up so he can jump in and save the day. Doing every little thing he’s told. Getting named the opening week starter. He makes you sick, that, that … game-manager! Connor Shaw is the type of guy your parents are always nagging you to date, but you want a guy who does what he wants when he wants, who doesn’t let a leadership seminar get in the way of a bitchin’ day-buzz. You’re only young once, ladies, and Stephen’s only got one more shot at an SEC crown.

What’s with them dudes?

The Clemson Tigers have built a reputation as one of the more curious bunches in college football, and they’ve grown no less curious in this young 2011 season. They flogged the fight out of Troy University opening weekend, and then came back in Week 2 and slogged through a monumental struggle with the Wofford Terriers. The Wofford freaking Terriers. Then it was big-boy time, Auburn coming to Death Valley East. During the drawn-out delay before Auburn could run its first play — clock malfunctions getting worked out — the Clemson defense jumped around and waved their arms like stranded people when a plane happens over, whipping the customarily loud home faithful into a froth, into another sonic gear, the front seven looking ferocious and mean and eyeing poor old Barrett Trotter like a snack. A couple of minutes later, it’s 14-0 Auburn. At this point my thoughts turned, as they do every hot-and-cold Clemson season, to wondering what precisely happens to the talent. We see it going into Clemson, blue-chipper after blue-chipper eager to pat Howard’s Rock (particularly noticeable if you pull for a Sunshine State team and have to watch guys like former-best-player-on-the-offense C.J. Spiller and current-best-player-on-the-offense Sammy Watkins catch the Amtrak to the Carolinas), and then we see it when it departs Clemson — the talent — when it gets drafted into the pros. But what happens to it at Clemson that keeps it from resulting in successful seasons? Of course, no sooner do I begin pondering this question does Clemson start freely and frequently utilizing future professionals Dwayne Allen and Andre Ellington and the aforementioned Watkins and another Florida guy, Mike Bellamy, whom Scout rated the no. 7 running back last year, and Auburn’s defense suddenly looks like the practice squad. And that made me happy, because if you’re going to plunder our talent, at least use it. Like at the all-you-can-eat buffet: Only Take What You Can Finish.

So three up and zero down, Clemson. Good start. But here’s what I have to tell you. For once, don’t get a big head. For once, stay focused. I know your coach was doing Tiger Woods fist pumps and the Electric Slide and pretty much everything short of skidding on his knees into the corner flag à la the English Premier League, but realize it’s a long, long season. Let’s say you split the next two against FSU and Virginia Tech, and you’re sitting at 4-1 with what appears to be two soft opponents on the way. Let me remind you, these teams can beat you if you let them. Yes, Boston College. I know the Eagles lost to Duke. They still can beat you. Yes, Maryland. I know it’s Maryland, but you still have to play well. Most specifically, this is what I’m worried about: You’re going to beat FSU and then let it squeeze you out of the ACC championship game because you’re going to lose to teams that shouldn’t beat you. We don’t want those filthy Noles winning any championships. Realize, Clemson, that Auburn is not a great team this year. After a couple of months of the SEC, it may not even look like a good team. Long season, OK? Whatever happens against FSU, there’s still a lot of ball to play, OK? OK? Repeat it back to me.

In a related tangent, that dumbfuck who was screaming at Gene Chizik a couple of years ago as he got off the plane can finally exhale. A leader not a loser? Wasn’t that it? Pal, I know you don’t have much going on, but the next time Auburn hires a head coach, stay well clear of the tarmac. Stay home and watch TV. There’s likely a DVD chronicling the 2010 Auburn title run. Stay home and watch that.

(250) — Number of dollars I’m charging for my new recruiting service. If you’re a college football power like, say, Oregon, and you’re interested in the talent pool of River Ridge High School (New Port Richey, Fla.), I can deliver those goods. I have years of experience as a mentor (being an older brother and all) and access to the depth charts of all major college programs through websites that I’m an exclusive member of and, most important, the ears of the River Ridge Royal Knights. Sure, this high school doesn’t produce a ton of big-time college football talent — the only one I’m aware of is former Buccaneer Ryan Benjamin — but the next time it does, there we’ll be, you with your highly ranked recruit and me with my cool quarter-grand. You won’t have to worry about being investigated by those wet blankets at the NCAA because payment will be mailed in cash to an onshore PO Box in Spring Hill, Fla., and then spent discreetly at the Outback Steakhouse on Highway 50.

And for you parents of talented football players, also at $250, I’m opening a 7-on-7 camp. So far all I’ve got is a vacant field and Jevan Snead to play all-time quarterback, but these spots are going to fill up fast (there are only 14 of them!). What a value. You can take a family of eight out for Ribs & Chicken on the Barbie, or you can ensure your son’s bump-and-run proficiency.

Oklahoma State at Texas A&M — The reason I can’t say the Aggies possess the best set of triplets in the land — I mean, aside from the existence of the South Carolina Gamecocks — is that there are five of them. There’s Ryan Tannehill and then there’s Jeff Fuller and Ryan Swope and Cyrus Gray and Christine Michael. This team can play offense, and so can the team they’re playing, Holgorsen or no Holgorsen. This baby should be a track meet. Track meet, son. Track. Meet.

I don’t know what I think of all this conference square dancing yet. I can’t tell if it’s dangerous or just another chapter in a novel of realignment that’s been in progress since the beginning, or if it’s merely silly. To have 16 teams in a football conference — that’s silly, right? But if it’s only silly, then why worry about it? What I find interesting in the case of the Big 12 — well, two things. First, the former Big 12 South possesses more good teams than the entire Pac-12 that a bunch of them seem to want to jump to. Second, the underlying factor of Longhorn Hatred. I’m sure at the very bottom you’ll find, as always, accounting spreadsheets, but you also get the sense that Nebraska didn’t like Texas. Not in the way of rival fans, but in a rare way. Like the smart, powerful, level-headed people who run Nebraska held genuine ill will toward the people who run Texas. Texas A&M, it seems angry at Texas now. Oklahoma feels disrespected. Every team in the conference is upset about that TV network. There are surely familiar corporate-style machinations afoot, but there’s also an irresistible soap opera element.

Arkansas at Bama — Last year Mallett threw this game away. People think maybe this year’s Hogs are better. Can they stop Trent Richardson and not turn the ball over? Both easily said.

LSU at West Virginia — The Hat versus The Almost Mullet. Dana Holgorsen’s Mountaineer offense has the potential to give that NFL feeder system LSU calls a defense more problems than Oregon gave them. At Morgantown. The scent of scorched Naugahyde on the breeze. A loss doesn’t devastate West Virginia, but it would be pretty bad news for the Tigers. I don’t know, Baton Rouge, this is a sticky one. May need a good dose of that Miles luck or mojo or whatever it is, if there’s any left.

The Book: Dead Solid Perfect
The Author: Dan Jenkins
The Sport: Golf
The Dope: I realize telling the Grantland crowd to read Dan Jenkins may be akin to hanging J.R.R. Tolkien posters all over a Fantasy convention, but I came to Jenkins sadly late and I don’t want to think that might happen to anyone else. Question: Is there another book that’s as continually amusing as this one? Possibly The End of Vandalism by Tom Drury, if you enjoy dry humor. If you enjoy humor of standard moisture, then no, it does not get more amusing than Dead Solid Perfect. Much of the setup is as traditional as can be — the main character’s return to his true love, the best friend who betrays him, rags to riches, bimbos versus thinking gals, the climatic last round of a major championship that the whole thing builds toward. All of it told with unbelievable verve. The thing that makes this thing special, though, is the sensibility that steers it. Our man Kenny Lee Puckett wants to be better, but not a lot better. He’s decent, but to a point. His life is unfamiliar, but the way he lives it is so damn relatable. He’s resigned to most of what ails him, and maybe part of the reason the book is so amusing is that he’s so often amused by his own troubles. I don’t recall one paragraph of whining. And it doesn’t hurt that this book, which in part relies on its ability to show you talented but flawed men in their element with nothing watered down, was written and published back before political correctness had become tyrannical. Jenkins builds credit with you by making you believe nothing is being held back, a type of credit readers are rarely obliged to extend these days.