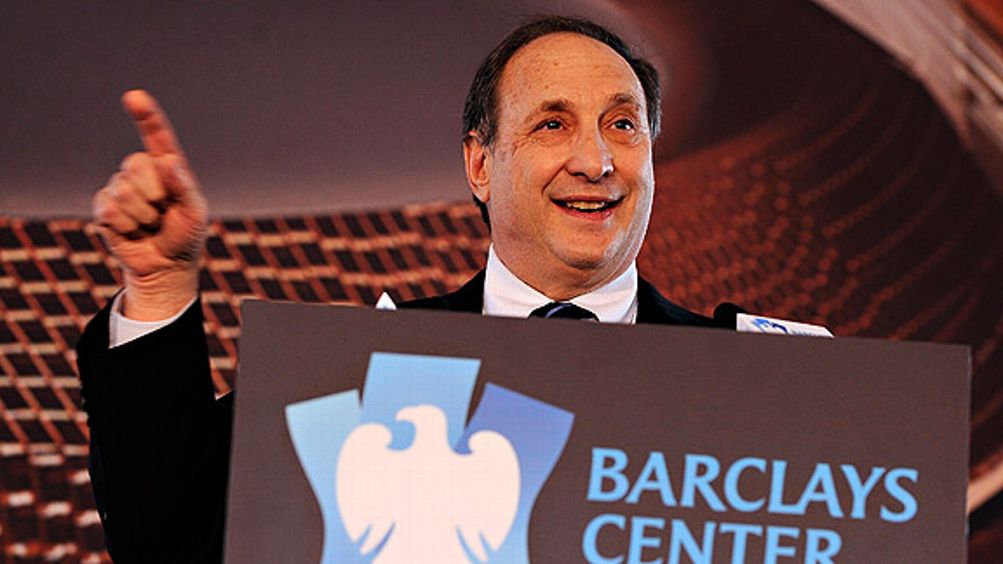 The Nets and NBA Economics

“One of the great forgotten facts about the United States is that not very long ago the wealthy weren’t all that wealthy. Up until the 1960s, the gap between rich and poor in the United States was relatively narrow. In fact, in that era marginal tax rates in the highest income bracket were in excess of 90 percent. For every dollar you made above $250,000, you gave the government 90 cents. Today — with good reason — we regard tax rates that high as punitive and economically self-defeating. It is worth noting, though, that in the social and political commentary of the 1950s and 1960s there is scant evidence of wealthy people complaining about their situation. They paid their taxes and went about their business. Perhaps they saw the logic of the government’s policy: There was a huge debt from World War II to be paid off, and interstates, public universities, and other public infrastructure projects to be built for the children of the baby boom. Or perhaps they were simply bashful. Wealth, after all, is as often the gift of good fortune as it is of design. For whatever reason, the wealthy of that era could have pushed for a world that more closely conformed to their self-interest and they chose not to. Today the wealthy have no such qualms. We have moved from a country of relative economic equality to a place where the gap between rich and poor is exceeded by only Singapore and Hong Kong. The rich have gone from being grateful for what they have to pushing for everything they can get. They have mastered the arts of whining and predation, without regard to logic or shame. In the end, this is the lesson of the NBA lockout. A man buys a basketball team as insurance on a real estate project, flips the franchise to a Russian billionaire when he wins the deal, and then — as both parties happily count their winnings — what lesson are we asked to draw? The players are greedy.”

Spoelstra in the Philippines

“Somewhere north of the U.S. Embassy in Manila the white charter bus carrying Miami Heat coach Erik Spoelstra made a wrong turn. The group, which included Spoelstra, two NBA employees, a handful of bodyguards, and a driver, was headed toward Torres High School, where Spoelstra planned to lead a basketball clinic. For now, however, they found themselves crawling through the cramped alleyways of Tondo, the most densely packed district of the world’s most densely populated city, where more than 600,000 people scrape out a living in three square miles along the banks of Manila Bay. While the panicked driver jabbered into his cell phone about a missed stoplight, Spoelstra and company stared through the windows at Manila street life: pedicabs zipping around the lumbering bus; children being bathed in plastic basins along the sidewalk; and freelance trash collectors pushing wooden wheelbarrows, beseeching anyone in earshot to donate ‘diyaryo’t bote’ — newspapers and bottles. Block after block, the coach saw homemade basketball hoops, some with rims bent out of repurposed rebar and others with plywood bed frames serving as backboards, hanging over street corners and tucked away in narrow walkways. The game was everywhere.”

Time for the NHL to Get Head Smart

“It was an extraordinary press conference. Four people were at the media table in a spare setting at Pittsburgh’s CONSOL Energy Center — Penguins general manager Ray Shero, Dr. Michael Collins, Dr. Ted Carrick, and Sidney Crosby. They were serious and straightforward. Through nearly 45 intense minutes, they offered almost no smoke or spin.

“The doctors, not the GM nor the player, spoke first. Dr. Collins, head of the University of Pittsburgh Medical Center’s Sports Medicine Concussion Program, laid out the events surrounding the injury, Crosby’s resulting symptoms, the diagnosis, the treatment, and the ups and downs of Crosby’s recovery since January. He was patient and thorough. He spoke as if he knew his audience was intent to hear what he said and, despite his occasional medical jargon, would understand him in all the ways that mattered. With a few lapses, Dr. Carrick, a chiropractor and founder of the Carrick Institute for Graduate Studies in Florida, did the same. Beyond the details, the doctors needed to convey that they were competent, professional, and responsible — that Crosby is in good hands.

“At times, the doctors talked about Crosby’s brain as if Crosby wasn’t there himself. Yet Crosby seemed undistracted. Respectful, he watched and listened as if the doctors were only his trusted advisors. He was still the captain of his own ship.”

A Running Diary of Game 162

“Field of Dreams was really about hope, higher beings, cosmic forces, unfinished business, believing past the point when you should believe. The Red Sox hit that point about two weeks ago, midway through their improbable swoon, as they kept trotting out the Lackeys, Wakefields and Weilands with everyone thinking, ‘Wait, we don’t have ANY other options?’ It’s been a surreal month for Red Sox fans: Our pre-2004 DNA told us to react the way we always did (total panic, woe-is-us complex, the whole thing); our post-2007 DNA told us, ‘You won twice, keep it in perspective, this isn’t life or death, other teams have it worse’; and our sports-fan DNA told us, ‘You just spent the past six months watching a team that’s probably going to kick you in the teeth … hard. It’s coming.’

“By the time Game 162 rolled around, I didn’t know what to think anymore. I ended up at my friend Daniel’s house to watch Sox-Orioles and Rays-Yankees. And yes, I kept a running diary. Here’s what transpired.”

“Certain problems never disappear. Sometimes that’s because there’s no solution to whatever the problem is. But just as often, it’s because the problem isn’t problematic; the so-called ‘problem’ is just an inexact, unresolved phenomenon two reasonable people can consistently disagree over. The ‘nostalgia problem’ fits in this class: Every so often (like right now), people interested in culture become semifixated on a soft debate over the merits or dangers of nostalgia (as it applies to art, and particularly to pop music). The dispute resurfaces every time a new generation attains a social position that’s both dominant and insecure; I suppose if this ever stopped, we’d be nostalgic for the time when it still periodically mattered to people.”

“Crosby is still a poster child — except instead of being one for the league’s glories and talents and excitement and skill, he’s now the face of the NHL’s most vexing problem: how to save the brains, and in many cases, the future lives, of its players in a sport built just as much on physical violence as elegant speed. This isn’t a problem specific to hockey, of course; see: Mike Matheny, Brian Scalabrine, and, most recently, Michael Vick. Nor is it a new problem in the NHL, as anyone who loved Patty LaFontaine or Eric Lindros can attest. But it seems, these days, to be one of hockey’s biggest problems of all.

“You may not know much about Crosby, or you may be Superfan no. 87. Either way, consider this timeline a useful resource or a primer or just a helpful reminder that you might not want to put too much credence in anything anyone (and/or their “three sources”) says, particularly when they’re talking about the aftermath of one’s brain sloshing around against the insides of one’s skull. Above all, consider it a story of the fragility of talent and health in professional sports, and the difficulty in trying to make sense of it all.”

“I was in a fraternity with a bunch of football players for two rocky quarters at the University of Washington. It was a football house, but I got along with them really well. A great player named Chico Fraley asked me, ‘Why don’t you try out for football?’ And I thought, ‘Ah, yes, I do want to die.’ But that’s what I did. I walked on.

“I was actually on the crew team for a few weeks first. Out of high school I got recruited to row. Not a lot of people watch crew at the University of Washington, so the team made up for it by being assholes — they were less concerned about rowing than whether the freshmen were being hazed enough. Every year, they’d shave the freshmen’s heads and eyebrows and make a hair pillow; they had a glass display case filled with years’ worth of hair pillows, which they were quite proud of. One time I didn’t push a chair in properly, so the varsity crew team surrounded me and their captain hit me for being insubordinate. So I switched to football.”

Welcome to Amnesty 2.0 in the NBA

By Jonathan Abrams and Bill Simmons

“The last time we went down this amnesty road (2005), teams saved more than $212 million in future luxury tax payments and Houston got a rule named after him. That term was actually a misnomer. Oddly enough — or fittingly given the slew of moves they made over the next few years — the Knicks never used the clause on Houston. In that spirit, we think this year’s amnesty clause should be named after Eddy Curry, another player who fits the purging prototype that, alas, the Knicks will never be able to use it on. We’ll call it the Curry Cure.

“For the record, Abrams couldn’t keep Simmons out of this feature — Simmons gave so many notes for Abrams’ original column that we decided to fold them into a bigger piece. Fine, it wasn’t ‘we,’ it was ‘him.’ As Simmons explained by e-mail, ‘The Red Sox are falling apart. The NBA’s salary cap is my security blanket. I’d like to spend the next 40 to 80 hours figuring out amnesty guys if that’s OK. It’s better than getting drunk, then waking up my kids by throwing up in my backyard at 2:30 in the morning.’

“If you say so. Here’s how each team should use their Curry Cure.”

“We celebrate buzzworthy teams for what they can be, solely based on a few random regular-season games. As one of the world’s leading experts on forecasting the authenticity of buzz behind emerging bands, I am familiar with the best ways to analyze and enjoy the buzz behind ‘what’s next.’ Kings of Leon, Coldplay, and the Strokes used to be buzzbands, and the quality and context of their product was easier to enjoy before they achieved status as ubiquitous brands that people think they are supposed to like. We want to jump on board the spirit of buzz before a band or a team builds a successful franchise model that they recycle until it becomes irrelevant.

“These are the buzzworthiest NFL franchises thru three weeks of action (before they actually become what they are).”

By Rany Jazayerli and Jonah Keri

Grantland breaks down the first-round matchups and picks its Divisional Series winners.