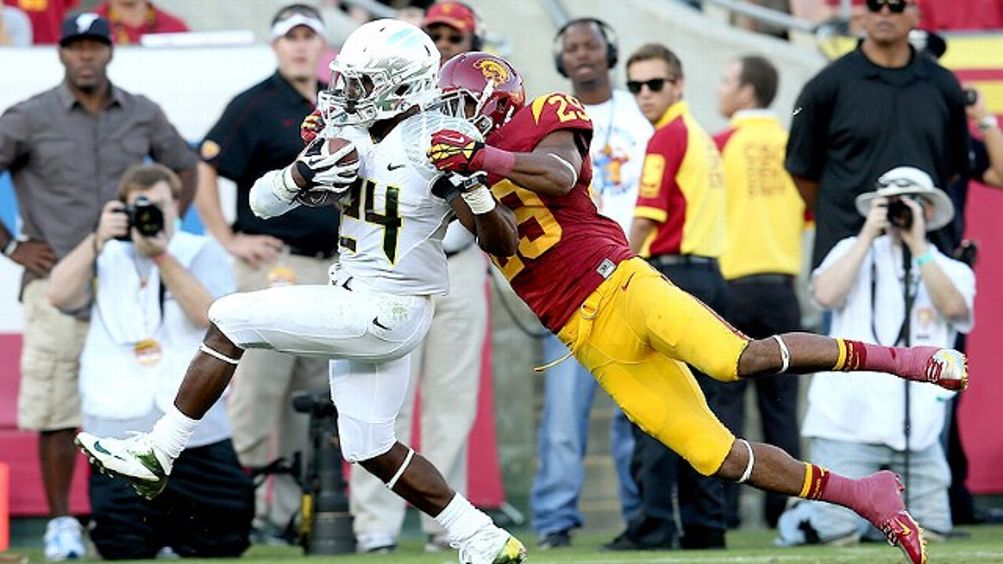 It must have been somewhere near the fourth quarter when the cough syrup began to take hold. I’d lived solely on my couch for five days at that point, what with the storm that knocked everything sideways and the flu that broadsided me afterward, and now I could swear I had just watched a 272-pound LSU fullback catch a pass, truck a pair of defenders, and lope along the sideline like a musclebound gazelle. It was a mesmerizing escape from the reality taking place outside my window — I double-dog dare you to watch this GIF wind back and forth for fewer than three minutes — and it was the first time all season I thought that Alabama, the team we’d already coronated in our collective consciousness as one of the most terrifying and untouchable college football teams of all time, might actually be vulnerable to something like defeat.

College football is a weirdly paced sport in that very little of consequence occurs for weeks at a time and then everything comes crashing forth all at once. For most of October, we’d been biding our time as the landscape shook out, as the Spurriers and the Kiffins stumbled off the path, and then last Saturday night a four-hour window opened and three of the top four teams in the country backed up hard against defeat, and each of them beat back the beast in unique and fascinating ways.1 “Nobody ever won a championship without one of these games,” said CBS broadcaster Gary Danielson toward the end of yet another draining Alabama-LSU contest. I’m not sure if he’s right about nobody ever doing it, but it sure feels that way. In virtually every other major sport, you can lose a game and still move ahead, but in college football in November, there is winning and there is oblivion, and sometimes you see it coming, and sometimes it drops on you from out of nowhere, and so much of the result is determined by luck and by circumstance and by the ability of a group of very young men to weather a fierce wind hurtling straight toward them.

I mean, we expected this from Alabama-LSU, and we suspected it might occur when Oregon traveled to Southern California as well. But Notre Dame? How was it that Notre Dame was still here? We all assumed they’d get drilled back to reality at Oklahoma the week before, and somehow they won that game, and now we all kind of thought they’d skate by until their season finale at USC, but at seven in the evening, my television was still tuned to the National Broadcasting Company, because Notre Dame was surely going to lose to a spectacularly average Pittsburgh squad. The Irish trailed 20-6, and they’d been wholly outplayed, and then they scored a touchdown and shanked the extra point. But at some point even then, you could feel it happening — you could sense that the Irish had scaled an invisible mountain, that after weeks of winning close games and winning games they weren’t supposed to win, they’d reached a moment at which they no longer believed they could lose. That may sound ridiculous and illogical, but this is college sports, and belief still counts for something, especially in the shadow of Touchdown Jesus.

So of course Notre Dame scored again at the end of regulation, and quarterback Everett Golson dove over the goal line on a two-point conversion to tie it, and from then on, even when Cierre Wood fumbled in overtime, you could just sense the Irish weren’t going to blow this. Even when Pitt had a field goal attempt to win, you kind of knew it would sail wide. There comes a point when a team begins to believe in its own narrative, and Notre Dame had survived enough gut-check games that the prophecy had begun to fulfill itself.

You couldn’t say the same about Alabama, though. The Crimson Tide had subsisted entirely on power and intimidation — they hadn’t won a game by fewer than 19 points all year, and their defense is so absurdly talented that there are whispers about whether it could compete in the AFC West. When LSU coach Les Miles faked a field goal in the first half and fooled absolutely no one, it reeked of the sort of clueless desperation that led us all to underestimate Les Miles in the first place. Miles dug his finger in his ear like Alfred E. Neuman, Alabama went up 14-3, and honestly, I kind of assumed it was over, that perhaps the Tide were good enough to sail through a 12-game season without requiring anything resembling a real gut-check.

By then, I was flipping back and forth between the Alabama game and the Oregon game, which felt a little bit like toggling between Antiques Roadshow and Crank 2. It bothers me that I continue to feel cheap and guilty for enjoying Oregon’s style of play so much, and it bothers me that, by contrasting these games side-by-side, people continue to make the assumption that fast-paced football is somehow inferior to the fire-and-brimstone defensive theatrics of the Southeastern Conference; this is why I am hoping that Alabama plays Oregon for the national championship — because it feels like it could be a determinative moment for the hurry-up offense, and for the wide-open future of the sport. And this is why I was secretly relieved that Oregon kept piling on the points against USC.

The Ducks survived their gut-check moment exactly as I hoped they would: They just kept moving faster and faster and faster and faster and FASTER, handing the ball to running back Kenjon Barner, gashing the USC defense, allowing points to be scored against them only so they’d have time to score even more. At one point, USC cut it to 41-38, but the Ducks kept moving, kept hitting paydirt, and put up 62, the most points scored against USC in school history. In the end, Lane Kiffin was so flummoxed that, when his team scored with one second left to cut it to 62-51, he chose to go for a two-point conversion. This is what the best teams do: They force you to play on their terms, and as evidenced by Lane Kiffin’s punch-drunk logic, Oregon had succeeded. 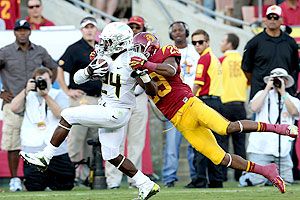 Meanwhile, LSU kept running plays, and this was more than anyone else had managed against a Tide defense that had allowed only 60.2 plays per game to its opponents. The Tigers cut the Bama lead to 14-10, and then came the wild throw to that Mr. T of a fullback, J.C. Copeland, and a few plays later it was 17-14 Tigers. All of Les Miles’s Mad Hatter tricks were spilling forth now — an onside kick that failed, a run out of the Wildcat formation on fourth-and-1 — and for a good long time as the clock neared midnight here in New York City, it looked like Bama, surprisingly enough, might be the one team to fail the gut-check.

We tend to think of the Nick Saban–era Tide as a cold and merciless killing machine; this is largely Saban’s fault, because he comes across as a fastidious and Napoleonic dictator, and I presume he likes it that way. But something happened in the final seconds on Saturday night, after LSU missed a field goal that would have put them up six, after the Tide drove quickly and neatly downfield, after quarterback AJ McCarron dropped a screen pass to T.J. Yeldon, who darted past the blitz and scored the game-winning touchdown. And what happened — and what made Alabama seem, for the first time this season, something like a living, breathing human story — was that their quarterback sat on the bench and bawled his eyes out.

McCarron covered himself with a towel, and I was tempted to dismiss this as so much histrionic silliness. But then it kept going, and it quickly became clear that this was the realest thing we’d seen all night. He’d stared down the beast, and he’d survived, and when that happens all you can do is drop your defenses and be damned thankful that you’re still here.