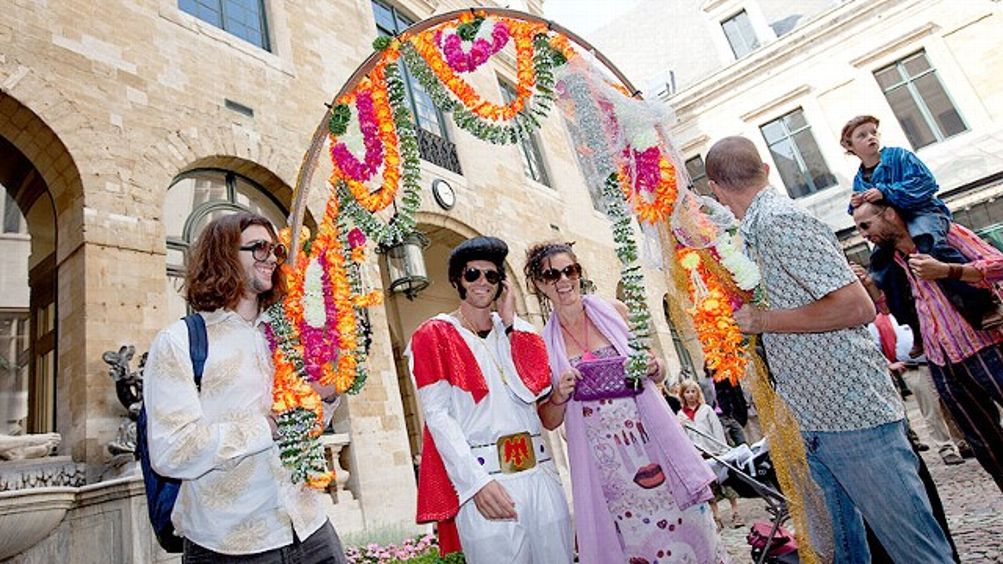 Every wedding has a story. In most cases, to be fair, it’s a story that holds the interest of only the characters involved — no one cares that you met in an elevator except you; no one cares that your Great-Aunt Dixie set you up with her landscaper except sweet old Dixie herself; no one really wants to hear about the “break” you two took during college, unless there’s something juicy in there involving the school mascot, sexual experimentation, and the 50-yard line of the football field.

Sometimes, though, the stories are good enough that they stand on their own. And even if they don’t, they can certainly help spark creative inspiration to would-be tale-tellers. Are you an aspiring author participating in November’s National Novel Writing Month? If so, you’re probably feeling a bit overwhelmed, a bit behind, a bit lost. So in honor of you, here’s a little exercise based on the amazing hashtag #NaNoWriMoOpeners (which is surpassed in hilarity only by #nytmovies).

I thought of #NaNoWriMoOpeners while reading through all of October’s featured “Vows” columns, all of which had opening lines worthy of landmark literature. And so here they are, in no particular order, with some suggestions for novice (or experienced!) novelists as to where the story could take off from there.

“Even news anchors with matinee-idol looks can get a case of the jitters.”

What the NaNoWriMo novel SHOULD be about: A scene-by-scene homage to Ellen Burstyn’s character arc in Requiem for a Dream. Working title: The Camera Adds 10 Pounds.

What the “Vows” article IS about: Two good-looking men who have lived in various places.

“Mardie Millit does not remember what song Michael Garin was singing that spring night in 2005 when they found themselves at the Birdland jazz club in Midtown Manhattan as part of an open-mic night.”

What the “Vows” article IS about: Elaine’s “marriages to other people”; suitcases without wheels; Jack Nicholson; a “white double-breasted dinner jacket and black pants with bugle beads”; men wearing sunglasses indoors who aren’t Jack Nicholson; rabbi wisecracks about circumcision; and “a stranger from Saskatchewan.” So basically, it’s a murder mystery without the murder. Yet.

“One thing was certain that August night in 1999: neither Georgia Aarons nor Hollister Scholte was looking for a potential spouse.”

What the NaNoWriMo novel SHOULD be about: A chronicle of two Christina Aguilera superfans’ separate failed efforts to find a Sam Goody that isn’t sold out of her eponymous debut CD — an increasingly dark and harrowing quest that would culminate with both of them giving up and going to drown their sorrows at the same local bar, where Christina herself, longing to feel like a Real Person, happens to be bartending in disguise. This would have a feel-good ending involving a bar-top sing-along to “Come On Over Baby (All I Want Is You),” and “nine months later … ” Christina would be performing at the wedding, natch. Working title: Genie in a Bottle.

What the “Vows” article IS about: I’m not entirely sure, but it involves the sentence “They were married Oct. 6 at Mapperton — the estate of John Edward Hollister Montagu, the 11th Earl of Sandwich and a maternal cousin of the bridegroom — near Beaminster, Dorset, England.” (Later the Earl is referred to as “Lord Sandwich.”) Eh, that historical-fiction genre just feels so done.

“As a former London sex columnist who, as The Guardian once reported, has ‘had more sexual encounters than she can either accurately count or reliably remember,’ Catherine Townsend is not easily rattled when it comes to men.“

What the NaNoWriMo novel SHOULD be about: A former London sex columnist not easily rattled when it comes to men finally meets her romantic match in an older playboy music manager who has worked with the Backstreet Boys and “emotionally volatile clients like Axl Rose” and shows up to first dates toting “all these girls wearing bandage dresses and full-on hair.” Working title: Quit Playin’ Games (With My Heart).

What the “Vows” article IS about: A former London sex columnist not easily rattled when it comes to men finally meets her romantic match in an older playboy music manager who has worked with the Backstreet Boys and “emotionally volatile clients like Axl Rose” and shows up to first dates toting “all these girls wearing bandage dresses and full-on hair.” APPROVE.

A big thank-you as always to Friend of Grantland Alex Morrison for putting together this interactive Society Scorecard (based on our proprietary NUPTIALS algorithm!). And congrats to the two runner-up couples; having a VI in your name and having a wedding on your family’s cattle farm are both excellent qualifications for nuptial notoriety.

But click and you’ll see how Elizabeth Kassler-Taub and Omer Ziyal won the month of October mostly on the strength of their sterling side-by-side educations: Both graduated summa cum laude from Princeton, and “they are both pursuing doctorates in the history of art and architecture from Harvard, from which each holds a master’s in the same subject.” This is actually pretty smart: If you’re going to study art history, best to do so with a loved one, because who else is going to want to flip through all those flash cards with you or spend their nights arguing about the Barnes Foundation’s new home?

Some of October’s actual wedding stories make me jealous. The people I sit next to on planes during hours-long delays are always brisk, boring businessmen or wriggly children, not soul mates 4 life.

Others are downright touching: Patricia Charman and William Wall, who were both widowed by cancer, were introduced by a friend and ended up getting stranded by Hurricane Irene during their first date, turning it into a four-day-long romp at a bed-and-breakfast. “We both decided,” explained Charman, “that having been through [losing a spouse], and then meeting someone else, why waste time?” I want these two to be my next-door neighbors. Also, mark your calendar for next fall, when we’re due to celebrate a slate of Sandy-related romances. (Speaking of Sandy, I really enjoyed this hack of the Amazon Wedding Registry to ask for Hurricane Sandy recovery supplies.)

But it’s the stories that highlight some particular or unusual interest two people share that are the best ones. For Penelope Thomas and Robert Signom III, the thing that brought them together was a shared love for the Irving Berlin song “Cheek to Cheek,” among other “Tin Pan Alley tunes.” Perhaps they ought to make friends with this bride, whose father “has edited the lyrics of [Cole] Porter, Irving Berlin, Frank Loesser and Ira Gershwin.”

Music was also at the root of Julia Mancini and Reynolds Whalen’s relationship, although it skewed a little more contemporary: They were both members of the Washington University a cappella group Mosaic Whispers. (I wonder if this constitutes “a distinctive group name“; it certainly wouldn’t win the Best Awesome Punny College A Cappella Group Name.) (I voted for “Great Balls of Choir.”)

Mr. Whalen was chosen as the soloist for “I Believe in a Thing Called Love” by the Darkness. He added some choreography, and it soon became known as his song.

“I always liked watching him do it because it was kind of goofy,” Ms. Mancini said. “We sang it many times together in the group and I was usually present in the background.” During their spring break tour they began dating.

If someone in an a cappella group is remembering someone else’s performance as “kind of goofy,” there are really no limits to how over-the-top it actually was. We already know that the chorus features a whole lot of falsetto, but in addition there’s about a 75 percent chance that the “choreography” involved a shirtless knee-slide down the aisle followed by a severe invasion of personal space on the nearest audience member. Whatever his key moves are, he “dusted off the song to propose,” with the rest of the a cappella group gathered to provide backup vocals. My heart’s in overdrive and they’re behind the steering wheel!

Here are some other observations from October, each one as stray as a single lady without a plus-one:

October certainly was a big month for the progeny of chairmen and CEOs. (Although to be honest I could sub any month in there and it would still be true.) The son of one top Barnes & Noble exec got married, as did the granddaughter of the chairman of the holding company that oversaw Marshalls, Thom McAn, and CVS. Also getting hitched (though not to each other, probably for antitrust reasons) were the son of the former chairman of SuperValu and the daughter of the late creator and chief executive of Food Emporium. (This is all making me nostalgic for Supermarket Sweep.)

But it was groom Casey Sullivan whose familial business background proved best. Not only did he and his wife get married “at the home of Charles R. Walgreen III, a friend of the groom’s family, in Stuart, Fla.” — yes, of the Walgreens Walgreens — he also has this Seinfeldian distinction to his name:

The groom is a paternal great-great-grandson of Henry Heide, who in 1869 founded the New York confectionery that bore his name and eventually became known for Jujubes, Jujyfruits and other candies.

I can’t lie: I kind of wish there had been some sort of Elaine-style botched proposal involving the candies. “I must’ve had eight in my mouth. I couldn’t talk. I couldn’t talk!”