The hype! The snow! The Super Bag! 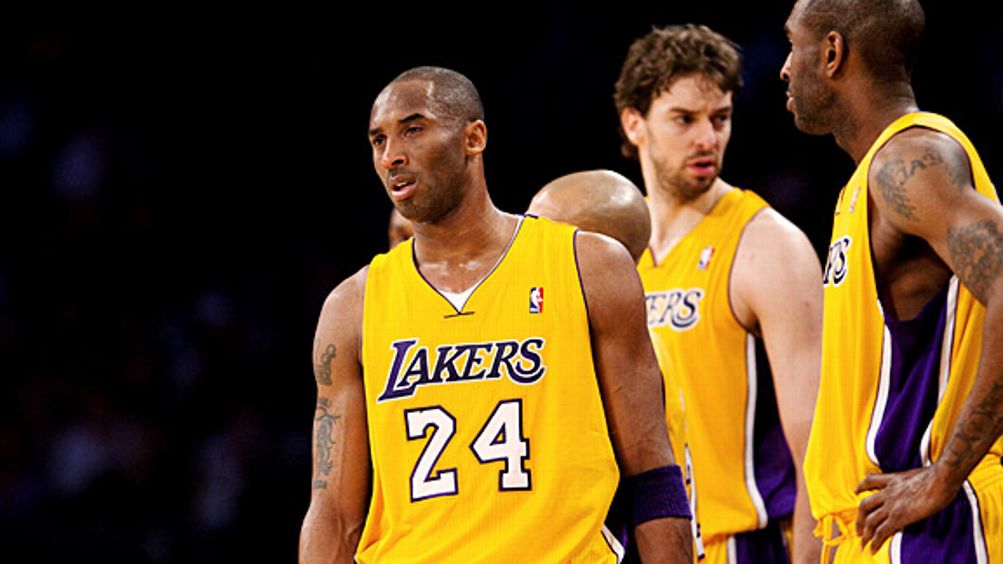 The opposing coach of the 13-year-old AAU boys basketball team screamed a homophobic slur at one of my players during a tense moment at the National Championships in Memphis a few weeks ago. The child from the Bronx, raised by his grandparents, was shaken and unnerved. After we won the game, a near brawl ensued between coaches, players, and parents. Thank god it was contained. But ugliness leads to ugliness, and the words of imperfect pop culture heroes such as Kobe, Joakim Noah, Roger McDowell and James Harrison have a real effect on children. Unfortunately, the sports media, uncomfortable with the subject matter, ignores the larger societal story. Instead, they report on the obligatory fines, apologies and suspensions, consistently sweeping the larger narrative under the carpet. Well fellas, hang on to your straps.

Fear, hatred, and prejudice are bosom buddies. But what is it about sexual orientation that continues to freak out so many? And why, in a sports arena so attuned to the beauty and shape of the male body, are the natural needs for love, comfort, and sex a conversation so many avoid? Daily, coaches, commentators, and athletes marvel at the shape of male players’ bodies. His legs are so powerful. His thighs are enormous. He has a perfect waist, big shoulders. From an early age, boys pat their teammates on their backsides as an act of praise and support. Jocks admire the abs, muscles, and pecs of their brethren. Teammates and competitors hug before and after contests. Some tell friends and foes, “I love you.” So what’s the beef? Fear of being touched? Fear of being in touch? Or fear that if gay men are accepted, a void at the bottom of the status ladder will need to be filled?

Here we are in 2011 and not a single active male athlete or coach in any of the four major team sports has ever been comfortable enough to say he is gay. Ostracism, economic ruin, unforeseen pressures, and even heckling from fans are clearly obstacles, as is the knowledge that homophobes feel empowered to use cruel language, abuse, and commit violence. Nobody ever questions the ideal of the “male hero,” which was cultivated by myth-makers over the years. Superman wore Peter Pan-like tights and had a Nureyev-like bulge, and Batman & Robin sure seemed pretty chummy for an older and younger man, but all three were fighting crime so nobody ever questioned them. Our leading men in Hollywood couldn’t possibly be gay, but Broadway remains open territory. An artist can be gay, but a heroic corporal searching for landmines in Iraq couldn’t for years until “Don’t Ask Don’t Tell” was repealed. “Masculinity” has been reduced to a marketing term, something of an illusion.

In June, my dear friend, Rick Welts, 58, the president of the Phoenix Suns, “came out,” making him the first male executive in any of the four major sports to do so.1 I’ve known Ricky since the early 1980s, when he was in charge of marketing for the NBA. He was a great-looking single guy with wit and intelligence — one of the most able executives in sports and entertainment. I often attempted to set him up with single female friends. He would smile, then effortlessly change the topic. Sometime in the late ’80s, a tall creep who held a major position for Major League Baseball shocked me by crowing out of the blue, “Well, Rick Welts, he’s a fag.” My initial instinct was pure anger directed at this cheap-shot coward. I didn’t know a thing about Rick’s sexual orientation, but I did know that such a slur could hurt his career, so I felt a need to protect my friend. I realized that this bum from baseball, who was soon to be fired for sexual harassment, needed to bolster his own soft ego by lessening the ego of someone else. These ideals of “protection” and “shame” tied to a sports career still very much exist today.

Rick Welts has big balls. His partially secret life allowed him to feel love, great loss, joy, and pain, but robbed him of his social freedom. The unknown of “being found out” was exacerbated by the anguish of overhearing the stupidity of creeps like “The Tall and Tan Bum from Major League Baseball.” Freed at 58 years old, Rick’s career will continue to blossom because, I suspect, the self-loathing by some decision-makers in sports is counterbalanced by more progressive CEOs. But, for a player, manager, or coach, the fears are significantly more challenging. What the sports world needs now is a no. 42.

Recently, basketball and hockey escaped the down low, with David Stern’s office creating a series of PSAs preaching tolerance (featuring Steve Nash and Grant Hill), and Sean Avery of the New York Rangers participating in his own TV spot accepting gay marriage. You can feel things shifting a little, personified by the always glib Charles Barkley, who said after Welts’ announcement, “I’d rather have a gay guy who can play than a straight guy who can’t.” Still, fear and hypocrisy remain rampant. Soon after the Avery spots gained traction, a Deputy Mayor of New York asked me if I could arrange for another major local team to volunteer a player so that the “tolerance” campaign could continue. Much as I tried, for player after player, the answer was a resounding “no.” (Soon after, New York legalized gay marriage, making it even more surprising that nobody would do it.) I guess it’s so much more fun for the Barbie doll multimillionaire jock to read about himself three times a week on Page Six, jumping from one fashionable spot to another, than to actually be a man and stand up for his fellow men.

“Faggot” implies “soft” — hardly the truth, and especially egregious when it pertains to another of my friends, Emile Griffith, a former six-time World Welterweight and Middleweight Champion in the 1960s and early ’70s (the days when each division crowned only one king). Now 72 years old, Emile moves in and out of hospitals, severely brain damaged and broke. His beautiful adopted son and lifelong partner, Luis Rodrigo, take turns caring for the champ2 in a one-bedroom apartment in Hempstead. Fifty years ago, then-champ Benny “the Kid” Paret taunted Griffith with the slur, “Maricon! Maricon!” before their nationally televised title bout. A gentle soul born and raised in the poor houses of the Virgin Islands, those words humiliated and enraged Griffith, who sought revenge in the ring with the whispers of “maricon” ringing in his ear (and maybe the anguish of being outed racing through his heart). A slow-moving referee failed to stop Griffith’s pounding of Paret before it was too late. Paret left the ring on a stretcher and passed away 10 days later.

The press, politicians, and fans all had a field day with the tragedy, attributing the horror to the brutality of boxing. From Nelson Rockefeller to the Vatican to the Japanese Diet, the call to abolish the sport was loud but short-lived. These opportunists understood the value of their pre-Warholian 15 minutes of fame. All of them avoided the other angle: the insult and subsequent reaction, just as they did 30 years later when baseballer Roberto Alomar spit in the face of John Hirschbeck after the umpire threatened the second baseman’s manhood. To Emile, the svelte champion with a 28-inch waist and a 44-inch chest, someone who was photographed with blond Scandinavian beauties and briefly married a luscious Island woman, his sexuality meant shame. Shame caused hiding. Hiding brewed self-loathing and anger. Those were the emotions that surfaced against Benny Paret.

Griffith fought more championship rounds in Madison Square Garden than any boxer in the history of the sport, more than Ali, Frazier, or Louis. He would knife opponents and pick ’em apart: Dick Tiger, Benvenuti, Luis Rodriguez, it didn’t matter. His handlers, his friends, and the boxing world conspired to keep his secret from the public. They would shrug, deny, lie, and “protect,” as did Emile. In the Hollis, Queens, home he purchased for his dear “Mommy” and his seven younger brothers and sisters, the basement apartment he shared with his lover Luis became his sanctuary. Yet they were never safe. Luis was once accosted by one of the champ’s brothers, who put him up against the wall, and, with a butcher knife at his throat, threatened, “You faggot! Leave my brother alone.”

In 1995, long retired and dulled by alcohol, Emile walked out of a gay bar in Times Square carrying a few hundred dollars. When five teens jumped him, they did not know their tipsy chump was actually a champ. Emile fought back for a few minutes before a baseball bat did him in. Boom, crash, blood, again and again and again. Somehow, the former World Champion rose from the pavement on his own and made it back to Queens, bleeding internally, his bones broken, his head crushed. His brokenhearted Mommy and lover Luis sat at his hospital bedside for the next three months. The “secret,” though, remained intact. The press respected him. Through it all, no one wants to admit “it.”

The damage to Emile’s brain was irreversible; his memory eroded. Well into retirement, the spiral kept going. Though all those championship rounds had made him slow, it was the baseball bat that returned Emile to the simplicity of his childhood. When I first went to the Virgin Islands to shoot my film, I was asked what I was doing there. When I replied, “A film on Emile Griffith,” the reaction was always the same: “Oh, the faggot,” the locals replied, callously chastising the great hero for whom local stadiums, parks, and boxing clubs all around them were named.

Returning to the States, I filmed Emile marching in a parade in Canastota, N.Y., a small town near Syracuse, the home of the Boxing Hall of Fame. There he was, the great champion, flashing his broad smile and waving the American flag. Along with Basilio, Fullmer, Ken Norton, Holmes and Frazier, they were tough, tough men, pure machismo. After Ring of Fire premiered at Sundance a year later, Luis came to see me. The day before, he and Emile had just marched, again — this time in the annual Gay Pride Parade in New York City. I will never forget what Luis said: “Dan, you wouldn’t believe it. All these people in the Village, they were just like us, me and Emile. We were comfortable. They were friendly. They welcomed us. They dressed like us. There was so much love there.”

Dan Klores’ new play, The Wood, about the newspaper columnist Mike McAlary, opens off-Broadway at the Rattlestick Theatre in New York on September 8.

Previously from Dan Klores:
Mind Over Media: Shoot the Handlers