The Branding of the Olympics 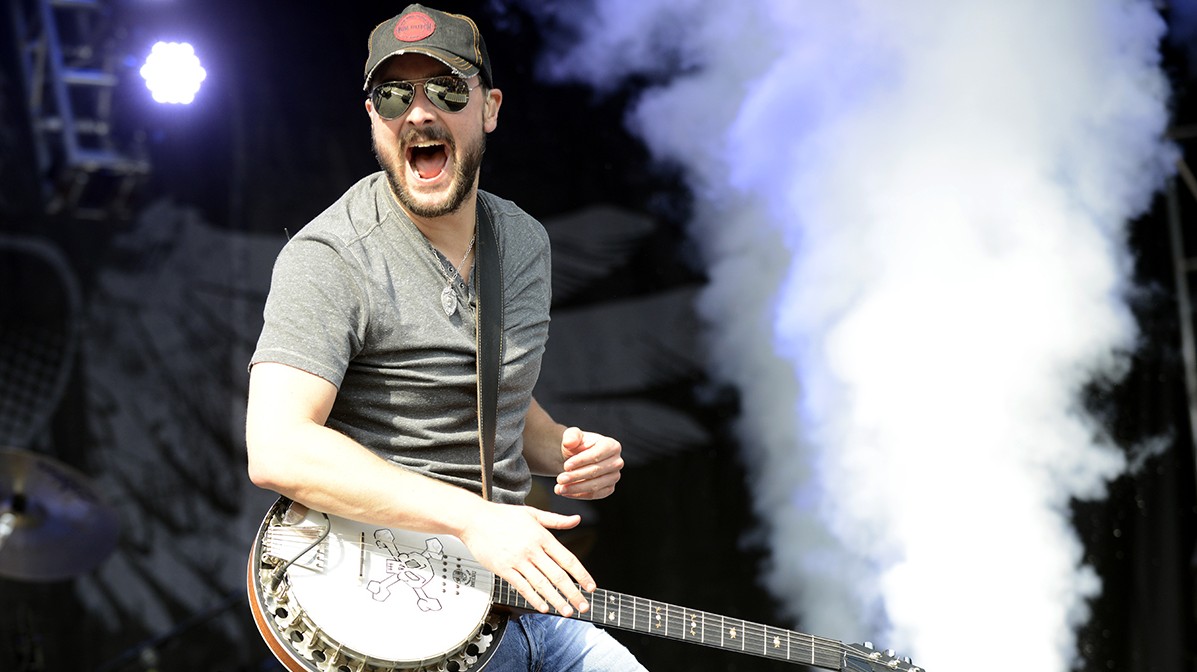 Whatever the opposite of trolling is, Eric Church did it to me.

It was last November, when he performed the title track from his new album The Outsiders at the Country Music Association Awards. I was already a fan of Church’s 2011 breakthrough LP Chief, which sent me back to his first two records, 2006’s Sinners Like Me (my current favorite) and 2009’s more adventurous Carolina. But “The Outsiders” was something else entirely. It was more in line with Church’s stopgap live release, Caught in the Act, released last spring, which blew out his broad-shouldered, tough-guy country rock with heavy metal bombast. Where Church’s studio work carefully cultivated his image as a live wire, Act was like a wildly malfunctioning cannon shooting fireworks toward the nosebleed seats. The album quoted Black Sabbath spiritually and textually (via the “Sweet Leaf” snippet woven into the stoner ode “Smoke a Little Smoke”) and aspired to the nuanced subtlety of Double Live Gonzo! It belonged less to 2013 than 1984, the year of the original live album called Caught in the Act, by those Midwestern arena-rock yabbos, Styx.

Church’s unveiling of “The Outsiders” at the CMAs was similarly anachronistic. First of all, no fewer than four guitar players stood onstage, which might’ve beat the total number of axes that appeared during the entirety of the MTV Video Music Awards a couple months prior. And those players engaged in all sorts of extraneous soloing not witnessed on prime-time television since Jeff “Skunk” Baxter was a gainfully employed fixture in platinum-selling rock bands.

Then there was the song itself, which combined all these things that I loved and never imagined would ever fit together. Church’s vocal delivery somehow synthesized Waylon Jennings’s sneer on Waylon Live with Sly Stallone’s comic-book cool in Cobra. “Bro country doofuses are a disease, and I’m the cure,” his posture seemed to say. The music started out a bit like Drive-By Truckers’ “Where the Devil Don’t Stay” with a dash of Metallica’s “Sad But True” and (seriously) Mike Post’s Law & Order theme, before winding up with a wicked instrumental breakdown lifted from a late-’70s Rush record. Lyrically, “The Outsiders” pushed the macho street-urchin fantasies of Born to Run and Appetite for Destruction so far past the point of parody that it came back around to cocksure awesomeness. (“We’re the junkyard dogs, we’re the alley cats / Keep the wind at our fronts and the hell at our backs.” Fuckin’ A!) Also, Church somehow worked a reference to Warren G’s “Regulate” in there, which was tremendous.

I couldn’t believe what I was hearing. “The Outsiders” was improbably perfect, like a unicorn rocking sunglasses and tight jeans.

Now, the rest of The Outsiders doesn’t quite go that far out there, in spite of Church’s prerelease intimations to the contrary. A graduate of Appalachian State University with a degree in marketing, Church is strident about pushing a brand that’s spelled out in the album title. “I don’t know how people are going to take it,” he protested a touch too much in Rolling Stone last week. “Shit, I don’t know if we’ll make another one. I can’t imagine continuing to try to push the envelope. How do you keep doing that?”

All right, hold your nonexistent horses, you not-actual cowboy. I really like The Outsiders — not as much as Chief or Sinners Like Me, but it’s great. Still, I dispute the notion that it’s a boundary-pushing potential career-ender. In fact, it’s the opposite, and I suspect Church knows this. The Outsiders is precisely the record that will sell Eric Church to those who haven’t already realized he’s the rock star they’ve been waiting for.

Yes, The Outsiders does lay on the badassery a little thick sometimes. There’s a Def Leppard–y song called “That’s Damn Rock & Roll,” in which Church describes the genre whose current commercial standard-bearer is Imagine Dragons as “a rebel revolution that’s fightin’ for peace.” And there’s another track called “Devil, Devil” that’s eight minutes long and opens with some portentous pabulum about how Nashville is “a junkie with a limp.” But other than that, The Outsiders is good in the same way Eric Church’s other albums are good. At the moment, he’s the king of a subgenre that only occasionally exists anymore in country and certainly not in rock. In lieu of a catchier name, I classify it as Really Popular Songs Played on Guitars About Everyday Life That Normal People From Unexciting Places Can Relate To.

As a songwriter, Eric Church is not interested in metaphors. One of my favorite songs on The Outsiders, a sultry soul number with bedroom eyes and great Booker T.–style organ licks called “Like a Wrecking Ball”1 is pretty explicitly about coming home from a tour and having boisterous sex with your wife. Now, I suppose the title itself could be considered a metaphor, except Church’s lovemaking is so vigorous that he describes pictures being knocked off walls and the foundational Sheetrock becoming compromised. Which I suppose means Eric Church’s pelvis is literally a piece of construction machinery. 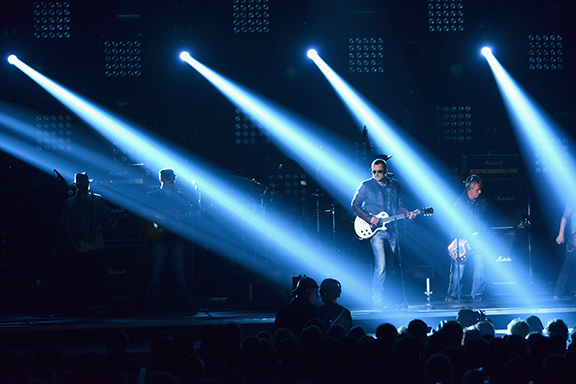 The best track on The Outsiders — and arguably the best song on any Eric Church record up to this point — is an excellent example of an Everyday Life song. Over traces of banjo and electric guitar that are soon joined by stirring handclaps and rousing tribal drums designed to lift asses out of $85 plastic seats, “Give Me Back My Hometown” outlines a relatable scenario for millions of brokenhearted schlubs still living in the towns where they grew up. A guy sits on a hill with a view of his old high school. He thinks about some girl from years ago who left him behind. He’s stuck at home, and it’s hell because home still reminds him of her. Even the damn Pizza Hut off the main drag is a rain-soaked power ballad for this guy. And he seriously needs her to leave his brain, because it’s either her or the town, and leaving this town is simply not a possibility.

Depending on where you’re from, “Give Me Back My Hometown” may remind you of the geography of your own environment — necropolis high school plus downtown street plus chain restaurant plus a lot of nothing between those landmarks — or an episode of Friday Night Lights that’s mostly just Coach Taylor speeches and last-second touchdowns. Either way, it is a solid metric ton of melancholy that will obliterate your chest cavity.

The lineage of “Give Me Back My Hometown” is not hard to trace. It consists of songs the protagonist is likely to hear on the radio once he cleans up his beer cans and climbs back into his shitty sedan. “Give Me Back My Hometown” comes from John Mellencamp’s “Jack and Diane.” It comes from Bob Seger’s “Mainstreet.” It even comes from Bryan Adams’s “Summer of ’69.” (And of course Church’s own “Springsteen.”) It is the sort of centrist, wistful pop-rock tearjerker that thirtysomething males had hits with before thirtysomething males stopped becoming pop stars.

Church would surely bristle at being described as a centrist. “I never, ever, ever want to be in the middle,” he recently told Spin’s Rob Harvilla. “I never want to be the standard.” It’s true Church is hardly “the middle” when it comes to contemporary country music. The so-called “bro country” craze of hip-hop-informed party songs about trucks, beer, and sleeves-optional living clearly sticks in Church’s craw, and The Outsiders includes several understated but nonetheless pointed jabs at the genre’s most popular conventions.

Take “Cold One,” the album’s most superficially “dumb” cut, with its fat “Mississippi Queen” guitar riff and setup about a sunny day, a pretty girl, and a 12-pack of brews. In Church’s version of this oft-told story, the girl steals one of the beers in the first verse and takes off by the time the chorus kicks in. Instead of handing off the bridge to Nelly, Church kicks into a furiously proggy guitar-picker interlude that temporarily disrupts the song’s party-hearty rhythm section. It sounds like a potential hit that’s been driven straight into an “underappreciated deep cut” ditch.

Church also sidesteps easy punch lines in “Talladega,” turning the usual “dudes hit up a NASCAR race” narrative into a meditation on mortality. “Like a stone, time rolls on,” Church sings in decidedly un-dude fashion. Even “The Joint,” the requisite pot song that’s become de rigueur on country albums lately, knowingly ducks expectations, its wobbly warble reminiscent of David Essex’s “Rock On” as played on a Walkman with dying batteries. Perhaps Church’s greatest rebellion is acting his age. When it comes to playing the part of the good-time male country star, the 36-year-old is simply too old for this shit. “In the mirror, I saw my surprise / Who knew gray hairs liked to hide,” he sings in “A Man Who Was Gonna Die Young,” shortly after expressing his amazement that he has outlived both Hank Williams and Jesus Christ.2 On The Outsiders, Church writes often about holding on to 16 as long as you can, and how exhausting that fool’s game can be.

Church’s willful skewering of country radio tropes has produced predictable dividends — “The Outsiders” flopped as a single, and while “Give Me Back My Hometown” is a top-10 hit on Billboard’s Hot Country Songs chart, it lags behind noticeably on the airplay chart.3 But Church isn’t chasing a country audience, he’s catering to his audience, and The Outsiders is attuned to where that audience is right now.4

Since the early ’90s, country stars have essentially annexed territory that once belonged to rock music, taking artists and listeners along with them. Back then, it was left to Garth Brooks and Shania Twain to make the big-tent arena-rock records the era’s alt acts were allergic to. Over time, a familiar pattern developed: Once-archetypal MOR pop-rock artists like Darius Rucker or Sheryl Crow were left for dead in the mainstream pop world. Those artists have moved over to country, often with success. Now, you can see it starting to go the other way, where rock artists need to glom on to country for the genre to still be considered “pop” music. At the same CMA awards show where Church busted out the Geddy Lee calisthenics, Dave Grohl joined up with Zac Brown Band to perform a track off last year’s Grohl Sessions Vol. 1 EP. And at the Grammys last month, a few hours before Grohl, Trent Reznor, and Josh Homme were rudely cut off during their “climactic” performance, American Idol judge Keith Urban was afforded all the time he needed to trade guitar solos with promising Texas blues artist (and budding rock star) Gary Clark Jr. Grohl and Clark aren’t stupid — they recognize that being a rocker in country clothing gets you a better seat at the table.

This is “the middle” where Church now lives. It’s an area that’s been long dead if you call it “heartland rock,” and fertile commercial ground if you call it “country.” In reality, it exists somewhere between the two. Church is playing a major role in fortifying the space for others, too. For pop-music listeners who have missed brawny-yet-sensitive Middle American troubadours, it’s like getting their hometown back.