Does Size Matter in the NHL? 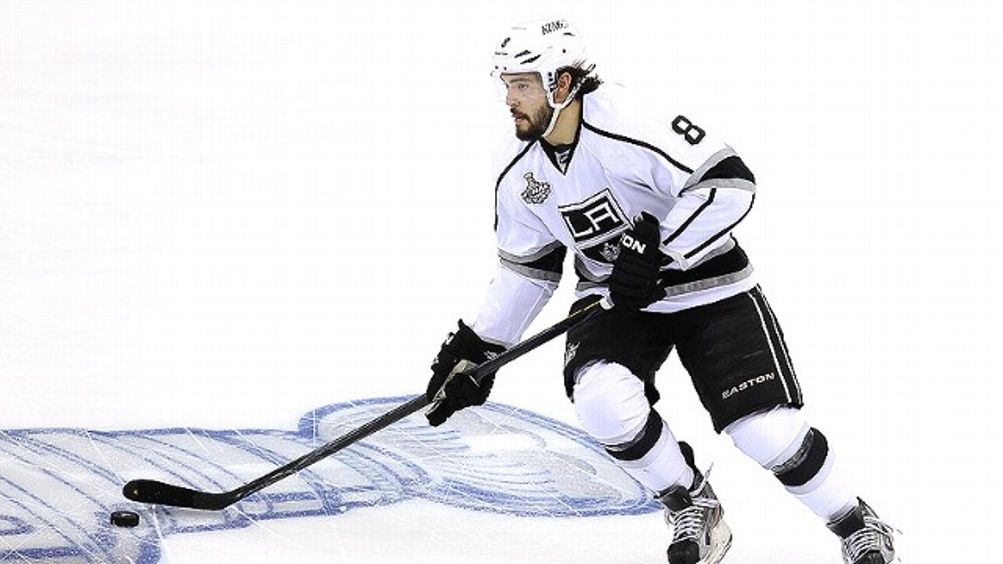 The Los Angeles Kings have intimidating size, killer speed, a ferocious forecheck, league-best goaltending … and, without a doubt, the most uncanny memories in the NHL. A few nights after Anze Kopitar reached back into the archives to provide some context for his Game 1 overtime winner, defenseman Drew Doughty didn’t take long to think about the most influential hockey plays he’d seen in his childhood.

“I actually remember [Scott] Niedermayer when he played in New Jersey, having a couple of end-to-enders,” said Doughty, who had a play like that of his own in the first period of Saturday night’s Game 2. The Kings won 2-1 in overtime on a goal by Jeff Carter, improved to 10-0 on the road in the playoffs, and will return to Staples Center tonight just two wins away from the Stanley Cup.

“[Niedermeyer] was an unbelievable player here, everywhere he played,” Doughty continued. “I always wanted to emulate him. He always scored some highlight goals that I remember.”

Setting aside the unlikely (but oh-so-tempting!) notion that his answer was some masterfully subtle trolling at work, it’s unclear exactly which highlights Doughty may remember. The 22-year-old was only 5 during, for example, Niedermayer’s “end-to-ender” that tied up a different Game 2 of the Stanley Cup finals, in 1995. But his goal was incredibly reminiscent of that one.

“Made a great play,” said the wonderfully taciturn (and serial double peace sign-throwing) Kings head coach Darryl Sutter of Doughty’s goal in the first period, which made the game 1-0. “One of those coast-to-coast things. You’ll look at it a lot of times.”1

The Devils staff certainly will. New Jersey has gotten to the finals based in large part on their effective forecheck, which only improved between Games 1 and 2. But a mobile, offensively minded defenseman like Doughty is Kryptonite to these efforts, not just because he rarely coughs up the puck once he’s gained control of it in his zone, but also because there’s no better way to avoid a traffic pileup around the boards than to drive straight through the middle.

“Quite honest, for probably a good part of two periods, [the Devils] were controlling that part of the boards,” Sutter said.

It was hard to watch Doughty’s goal and not mutter to yourself that that, right there, is why he went no. 2 overall in the NHL draft in 2008, the year Steven Stamkos was taken with the first pick.

In his first two seasons in the league, Doughty — who grew up a Kings fan in Canada — had many such moments. His first season he was named to the league’s All-Rookie team, and in his sophomore campaign he put up 59 points and was voted a finalist for the Norris Trophy for the league’s best defenseman. He was the second-youngest player in NHL history to earn such accolades. (Bobby Orr was a few months his junior.) That season, he was also a key player for the gold medal-winning Team Canada at the Vancouver Olympics.

But he had fallen off, in relative terms, in the two seasons since. While he continued to play massive minutes (in his four years in the league, he hasn’t averaged below 23:50 a game), his scoring wavered. Last year he saw his production drop to 40 points, and this season he contributed 36 after a contract dispute kept him out of training camp for nearly two weeks.2 He ultimately came to terms with the Kings, but his eight-year, $56 million contract made him the NHL’s third-highest-paid defenseman and added a whole lot of pressure.

If there were lingering questions, though, Doughty has more than answered them in these playoffs. He has matched up against some of the game’s toughest players. He’s played even more of the already big minutes he logged during the regular season. He’s on the ice at even strength, on the power play, and on the penalty kill. People — including one person I spoke to who actually gets a vote — are starting to throw around the words “Conn Smythe” when discussing Drew Doughty, although it’s hard to imagine anyone but Jonathan Quick getting the honor at this point.

You forget that Doughty is just 22 — Dustin Brown calls him “Dewey” — until, as in Game 4 against Phoenix and again in Game 2 against New Jersey, he totally loses his shit like a little kid throwing a tantrum. It’s scary to see — not the freakouts themselves, but their reminder that he’s still just a kid and will only improve.

“I think that’s probably why I struggled the first half of the year, put all that pressure on myself with a big contract,” Doughty said on Sunday at the Kings’ practice facility. “I just wasn’t doing the things I knew I could. I wasn’t happy coming to the rink every day.3 I was disappointed in my play. I was disappointed that I wasn’t playing up to the standards I had got myself into. Finally things started turning around. My play definitely got a lot better.”

Aside from the contract talk, Doughty’s words may as well have been describing his entire team this year, Quick excepted.

Take Jeff Carter. On a Kings team filled with turnaround stories, his season might have the sharpest worst-to-first arc. The sniper was traded last summer from the Philadelphia Flyers to the Columbus Blue Jackets on the same day that the Flyers’ former captain/Carter’s dear pal (and partner in crime) Mike Richards was dealt to L.A.

Carter got hurt almost immediately upon joining the Blue Jackets and did little but sulk once healthy. The situation grew so toxic that Columbus quickly gave up, trading him to the Kings for Jack Johnson and a pick. (Poor Johnson, by the way.) And now here he is, scoring the overtime game-winner in Game 2 of the Stanley Cup finals, while Flyers fans wonder just where that scoring touch was when they lost to the Blackhawks in 2010.4

“It was a tough situation,” Carter said Sunday of the trade from Philadelphia. “We [him and Mike Richards] had a lot of thinking to do. Took a little while to get over that. It’s funny how things work out. We’re both in L.A. now, two wins away from the Stanley Cup. Couldn’t be happier.”

Soooo, how ’bout those Devils? The most frustrating thing for New Jersey isn’t just that they’re trailing 2-0 in the series, it’s that with a bounce here or there they could have been on the other side of both games. Asked whether the Devils had been dominated by the Kings in the first two games, head coach Peter DeBoer could do nothing but smile.

“Who said we were dominated?” he asked. “What were they drinking? They must be from here.”

The Devils have reason to be hopeful, then, but the cards continue to stack against them. Their flight to Los Angeles was the first time the team boarded a plane since their opening-round series against Florida. The L.A. Kings will reportedly have Wayne Gretzky on hand to drop the ceremonial puck before the game, a cameo that is sure to whip Staples Center into a frenzy. Only two teams have ever battled back from losing both opening home games in the Stanley Cup finals — and that was in 1942 and 1966.

Still, the Devils have gotten themselves out of some tricky situations all postseason. They were down 3-2 in their series against Florida and won twice to advance. Against Philadelphia, they dropped the opening game and then rattled off four straight wins. And they were shut out twice in the first three games of their matchup against the Rangers before winning three in a row.

“There was some frustration building up throughout the Rangers series, even the Florida series as well. We’ve done a good job of rebounding back,” said Devils captain Zach Parise this morning at the team’s hotel. He added that the team had watched lots of game video in past series to remind them of how many chances they were in fact generating, even if they weren’t converting as much as they would have liked.

That’s been one of the stories of this series, too: After a so-close-yet-so-far-filled Game 1, the Devils again were just a Charlie Conway–esque few inches away from taking Game 2, most memorably when Ilya Kovalchuk hit the crossbar in the tied contest’s closing seconds.

He was talking about the Rangers series, but he recited a mantra on which the Devils will need to spend today meditating if they’re going to make this a series against the Kings.