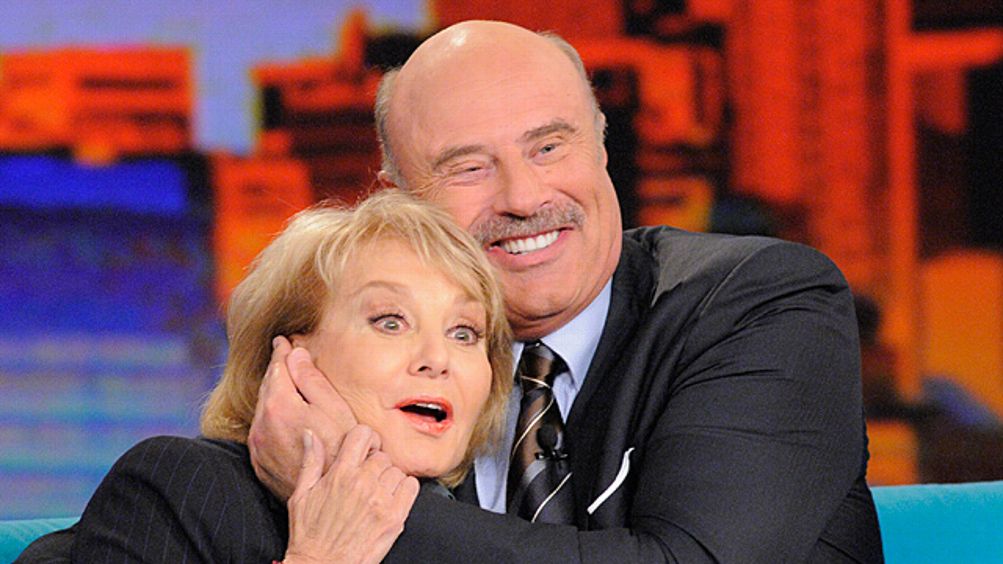 Dr. Phil played college football. Talk about your ledes that write themselves. He was a middle linebacker for the University of Tulsa in 1968. I mean the Dr. Phil, the one of daytime TV and empowerment bullying and driving-instructor authority-baldness and Oprah and mustaches that were already endangered back when he shot them in peat swamps. “How’s that working out for you?” — that guy. He was a star defensive player for Shawnee Mission North High School in Overland Park, Kansas, during the middle of the Johnson administration, then earned a scholarship to play for the Golden Hurricane the year Bobby Kennedy was assassinated. Which of course he did, because America’s going to happen whether you’re paying attention or not.

Dr. Phil — I guess he was still “Phil McGraw” in 1968, though I can’t stop picturing “Dr.” on the jersey — got only one season of Missouri Valley Conference ball under his belt before a career-ending head injury1 forced him toward a life of pointing at people while helpfully mocking their life choices. During that doomed, glorious freshman campaign, however, Dr. Phil not only led Tulsa to a doughty 3-7 record, he also managed to experience one of the craziest games in NCAA history. Let’s qualify that: Every game Dr. Phil was involved in was one of the craziest games in NCAA history, by virtue of his having been involved in it.2 But Tulsa vs. Houston was crazy in a way that — well: Say you encountered an alien civilization whose entire language was based on college football.3 This is the game you’d show them if you wanted to get locked up.

It featured a flu epidemic, a future NFL coach, and a 49-point fourth quarter. A country music star caught a touchdown pass. The winning coach was a tactical revolutionary; the losing coach was the most beloved football hero ever to grace early-1950s Saskatchewan. It was the White Album of college football games, and it was played the day after the White Album came out. Oh, and it’s still the last time a major college program scored 100 points.4 It was Executive Platinum Oak Cask crazy. And that’s before you get to Dr. Phil’s part in it.

DR. PHIL: I played for University of Tulsa, and I was there the year that we got beat by Houston a hundred to six.

DAVE: We will look it up. What position did you play?

DR. PHIL: Well, I was a middle linebacker, and a tight end, and just kinda any — I mean, at halftime I was lookin’ out the ear hole of my helmet, so I don’t know where I was playin’.

DAVE: So you helped out on that defensive effort.

It was a warm night in Houston, November 23, 1968. The Astrodome was three years old and still seemed like something out of Star Trek, which had another six months left to air on NBC. The Houston Cougars, playing at home, were ranked 11th in the AP poll following a brisk 77-3 win over Idaho. Their veer offense, designed by head coach slash offensive coordinator Bill Yeoman, had broken college football open like a weak piñata. (Dr. Phil’s Life Law No. 1: “You either get it or you don’t.”) They were all confetti and successfully executed option reads. They had a reputation for running up the score.6 Against weaker teams, they scored whenever they wanted,7 which made them not so much the betting favorite against the unranked, 2-6 Tulsa Golden Hurricane as the mile-high wall of fire on the horizon that maybe just noticed Tulsa’s house.

In the locker room before the game, however, the visiting team had other problems. An especially virulent strain of flu had been cavorting through the Tulsa athletic dorm, somehow overcoming the formidable sanitary standard those three words imply, and 15 of Tulsa’s 22 starters were shivering, feverish wrecks. “They tried to act energetic, but they were so weak,” Tulsa coach Glenn Dobbs remembered in 1985. “My sons Glenn III and John were on the team … their eyes were glazed with fever.”

The team doctor pleaded with the coach to call off the game. But Dobbs, a former Tulsa star who, because the world just does whatever it wants, had been an icon for the Saskatchewan Roughriders of the Canadian Football League,8 refused to surrender. “I just never liked backing out,” he said afterward. Tulsa had two defensive linemen who were well enough to travel. One of them passed out before the coin flip.

“I want you to get excited about your life!” is a sentence that Dr. Phil likes to bellow in an inspirational way at guests on his show. But it’s hard to be excited about your life when you have a 102-degree fever and you’re playing football against a much better team and 34,000 hostile fans are screaming at you and you want to puke in every huddle. Tulsa kept it respectable in the first quarter, if 14-0 is respectable. But it was the way Houston scored — a 35-yard run by its star tailback, Paul Gipson, a 60-yard pass to its star receiver, Elmo Wright. The Cougars just sauntered down the field, and then the Hurricane would get the ball and struggle to go nowhere for a few minutes. Maybe they’d manage to complete a pass, something they did 11 times in the game. Maybe they’d get crushed behind the line of scrimmage by Houston’s dominating linebacker Wade Phillips, who would later spend three and a half seasons providing a plush shoulder for Jerry Jones’s vulture talons as coach of the Dallas Cowboys.9 “I had never seen a team play with less energy, speed, strength, or drive,” a fan who was at the game later wrote. “Tulsa that night was a team that was only technically present.”

It was 24-0 at halftime, when Dr. Phil remembers looking out the ear hole of his helmet. Players packed into ice baths to get their temperatures down. (Life Law no. 2: “You create your own experience.”) By some feat of hard-luck heroism, Tulsa managed a scoring drive to open the third quarter, capped off with a 14-yard touchdown pass by Glenn Dobbs III and (naturally) a missed extra point. Then Houston scored 76 unanswered points.

I’m just going to throw out some stats here to give you a sense of what “76 unanswered points” looks like. Houston punted once the entire game. The Cougars rushed for 555 yards; Tulsa had 86. Gipson alone ran for 289 on 29 carries, in three quarters. Houston’s points by quarter: 14, 10, 27, 49. It scored seven touchdowns — seven! — in the fourth, even though Yeoman pulled his entire starting offense after the third. There’s debate about everything in sports, including whether winning 100-6 constitutes running up the score. (Life Law no. 6: “There is no reality, only perception.”) The “no” faction asks, not totally unreasonably, what Houston was supposed to do if the Tulsa players were physically incapable of tackling. Just fall down? The Cougars’ last two touchdowns came on a 25-yard pass (thrown with the team leading 86-6) and a 60-yard punt return, respectively. Which could be evidence either way, I guess.10

Also, that last touchdown pass? It was caught by a defensive back named Larry Gatlin, whom Yeoman had moved to wide receiver because that was what you did when you were winning by 80 points. In the late ’70s Larry Gatlin started a band with his brothers and wound up recording 33 Top 40 hits.11 This was that kind of game.

In a way, it makes perfect sense that Dr. Phil played college football. If football were to take human shape, grow up a little, and get a job, wouldn’t it basically emerge as Dr. Phil? I can imagine football brushing out its mustache, swaddling its gut in a boxy power suit, and riding some vintage muscle car to the TV set where it berates scared receptionists for a living. I can imagine football leaning in a little too close while trying to help a single mom straighten out her life — a happy charlatan, threateningly reassuring, a shuddering methane belch from the depths of the American psyche. Life Law no. 8: “We teach people how to treat us.” Isn’t that what Roger Goodell has been saying all along?

You could make the case that Houston 100, Tulsa 6, is the key to Dr. Phil’s whole character. He has credited football with arousing his interest in psychology, after all. The hook was supposedly that the sport showed him in junior high how people with advantages don’t always succeed while people with disadvantages “can be absolute champions.” But doesn’t his whole career suggest a pretty shrewd grasp of the opposite? A sense that you might as well be the guy without the flu? You can’t even hate him for it. He saw a culture where Wade Phillips and Larry Gatlin and the Johnny Unitas of the Canadian prairie were all crashing around the same dumb circus, and in the best huckster-revivalist tradition he figured out what to tell the big-top audience to make it think it could get well.

The best part of Dr. Phil’s role in this game is that I can’t find conclusive proof that he actually played in it. He says he did (he says a lot of things). But read that Letterman transcript again — isn’t he kind of evasive about it? “I was there the year we got beat by Houston.” “At halftime I was lookin’ out the ear hole of my helmet.”12 Is it a little weird that he doesn’t remember what position he played? He’s not listed on the Fanbase site that’s the only online source for Tulsa’s 1968 roster. He’s not mentioned on Tulsa football’s own list of stats for that year, though those focus heavily on offense — and weren’t freshmen ineligible until 1972 anyway? He’s not mentioned in any of the retrospectives of the game from the ’80s and ’90s, before he got famous. No one seems to remember whether he had the flu or not. Is it possible he stayed behind in Tulsa? That he watched from the sidelines? That he wrote himself into the story later? After World War II, half of France claimed to have fought with the Resistance. Maybe someone like Dr. Phil doesn’t get near something like this game without feeling the urge to capture it for his own bestiary.

I’m sure we could clear up this question with a couple of phone calls, but I’d honestly rather not know. It’s not that I don’t believe Dr. Phil; it’s that the existence of creative doubt is a more eloquent window into the phenomenon he represents than knowledge could possibly be. Dr. Phil is a self-invented character, like Falstaff or pre–Smoking Gun Rick Ross.13 He’s trading on his ability to improvise a deep link with an American TV audience. Of course football has to be part of that. Of course the weirdest football game in history has to be part of that. Look, he already told you all of this. I want you to get excited about your life. You create your own experience. There is no reality, only perception. You either get it or you don’t. Teach me how to treat you.