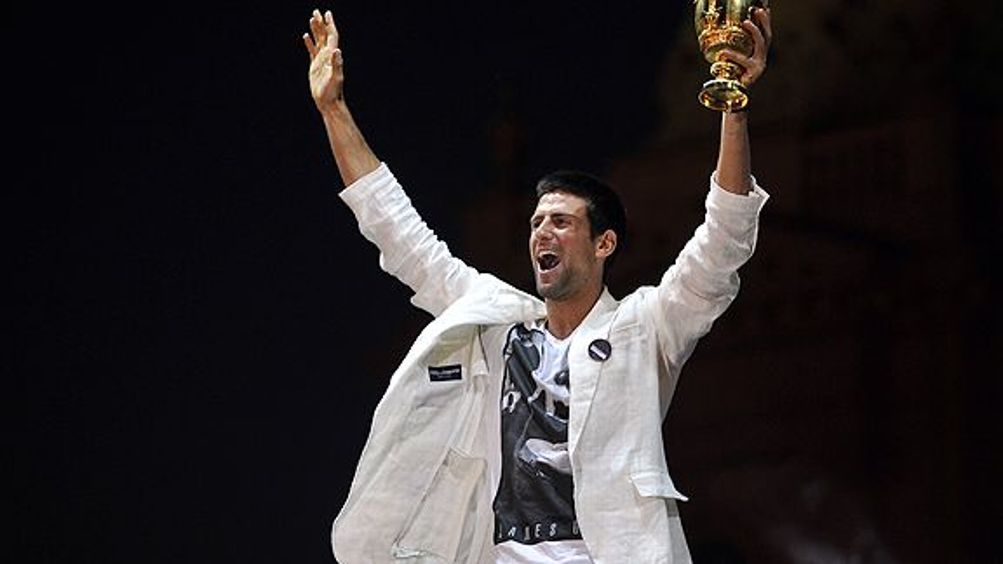 It’s a fair question: Have we entered the Djokovic era? Since late last year, Novak Djokovic is 48-1. In this run, he’s beaten Andy Murray, Roger Federer, and Rafael Nadal three, four, and five times. Sunday, after losing the Wimbledon final and the no. 1 ranking to Djokovic, Nadal admitted that his Serbian usurper now holds the keys to a piece of prime real estate: Nadal’s psyche. How’s that for a sudden turn of events? Just as we were thoroughly enjoying the epic poetic case study that was Federer-Nadal, along comes this guy, who partially attributes his surge to a new gluten-free diet.

Djokovic has given his sport what for too many years it’s lacked: a charismatic villain. Or rather: someone whose charisma has a touch of villainy. At the 2010 Australian Open, Djokovic arrived for his night matches in shimmering black Sergio Tacchini. It was the boldest, chicest thing he’s ever worn. Sadly, it lasted exactly one tournament. His opponent that evening, Jo-Wilfried Tsonga, became less impressed or more interested in being the desperado to Djokovic’s bad sheriff. Either way, Djokovic was gone the next day.

As good as it looked on him, that getup probably seemed redundant for a man whose most memorable facial expressions — his mouth is frequently agape — all meet the dictionary definition of “cocky.” Still, even in white, Djokovic is always the man in the black. The haircut merely reinforces the dastardliness. It’s a bushed buzz cut whose bristles send a mixed message: “Pet at your risk” and “No. 8” on the barber hairstyle guide poster (the one for boys).

It’s not that you don’t like him, although it’s entirely possible that you don’t: It’s that you don’t like him has much as, say, the newly sympathetic Federer, whose myth only swells amid the debate over whether he’s past his prime, or the suddenly human Nadal, who, in losing Sunday’s final, must now bear the burden of a therapist along with the onus of being great. No one is more tragic than Andy Murray. The British would root for a tree if it had a chance of winning Wimbledon. Murray is their Ent, and he loathes it.

As yet, the Djokovic storyline, with its days of highlight-reel tennis, refuses anything that could be interpreted as conventionally sentimental. With all due respect to the Swedish spoiler, Robin Soderling, Djokovic is the lone Ivan Drago in a sport suddenly simmering with Rockys. He’s mocked Nadal’s pants-tugging and has annoyed more than one opponent with the astronomical number of times he’ll bounce a ball before serving. He does impersonations (of McEnroe, of Sharapova), makes funny faces, and loves to dance in public. He’s a cutup, a comedian, and a clown, and that seeming lack of seriousness and imperviousness to embarrassment combined with borderline athletic perfection and what can be construed as flashy self-regard is confounding and confusing: Does he want us to like him or not? He doesn’t, and he does.

Take Monday, for instance. Djokovic returned to Belgrade to share his Wimbledon triumph and trophy with a reported 100,000 people. He took the stage in jeans and a white linen blazer whose sleeves were pushed up to his elbows (they refused to stay there). He wore it over a T-shirt with a giant James Dean printed on it. The button on the lapel confirmed suspicions that 21st century Belgrade is still just 1985 Yugoslavia at heart. (The fact that the button was just his nametag from the Wimbledon Winners Ball and not for the Sex Pistols confirmed that Djokovic is also part dork.) It was a look that evoked both summer-concert-series and Summer School. In a show of true restraint, he didn’t pop the collar.

He saluted his countrymen and dedicated the victory to his country. He then handed the trophy to his mother and, as a live band hammered out processed new-wave, proceeded to work his way across the stage (that mouth forever agape) in a kind of hydraulic bent-arm shimmy that can clear a dance floor.

As a national production, the whole thing was beautifully obnoxious, refreshingly tacky, and authentically Eastern European. Djokovic has won the Australian Open twice, but this Wimbledon celebration was very “new champion.” It felt like a bigger deal than his fellow Serb Ana Ivanovic winning the French Open three years ago. It also seemed to epitomize the ambivalence one feels about Serbia’s most athletically dominant son. Novak Djokovic is a song you despise but dance to because its relentless hookiness leaves you no choice. Novak Djokovic is disco. You hate him. Yet you can’t resist him. So you hate yourself. For the Nole-repulsed, there should be comfort in the memory of what happened to disco. Of course, that’s myth. Disco didn’t die. It just stopped eating bread. 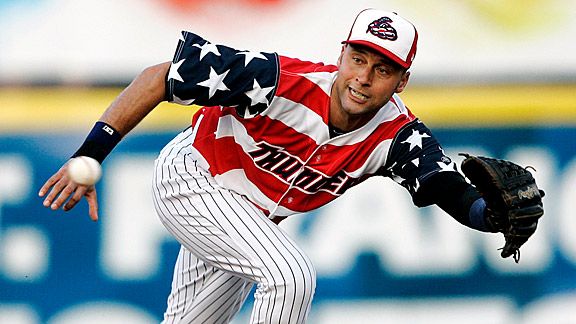 This week Derek Jeter spent two rehab games with Trenton Thunder before returning to the Yankees on Tuesday. And while it’s worth complaining about the Fourth of July uniforms he and the rest of the team wore (where there’s uncertainty about Djokovic, there’s no argument about the jerseys: uncool), all those feelings of blech should be aimed, like a nuclear arsenal, at the Yankees’ owner GM, Brian Cashman.

Cashman jetted south to look in on some horses and monitor Jeter’s progress. Apparently, he didn’t enjoy how one of his most prized possessions was outfitted. Who would? Yankees pinstripes on the bottom, office-softball-league craziness up top: baggy stars for sleeves, giant stripes along the trunk. In chemistry the clash would be combustive. The only explanation is that they were sewn in Fenway Park. If major league baseball is having a tailoring problem, minor league baseball subsists in a state of perpetual hot mess. Cashman simply laughed.

“We had a tough loss against the Mets [on Sunday],” he told ESPN2, “so I was like, ‘Derek I’m going to take a picture of you in this uniform here and I’m going to lift our guys’ spirits.” He went on: “And I’m also going to send the message: Try to do everything you can to not get injured so you don’t wind up in a minor league rehab assignment wearing a uniform looking like this.”

The owner GM of the team currently affiliated with the Thunders would seem to be in a position to make a difference and, I suppose, his critique of the fiasco might shame the Thunder’s operators into finding someone with taste and a tape measure. But were I playing for Trenton and listening to Cashman’s comments, it’d be impossible to tell compassion from douchery. 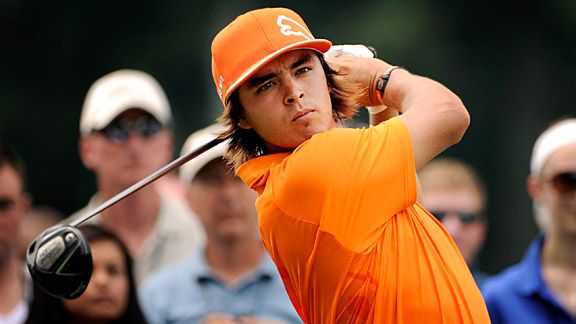 It’s tempting to wish Cashman would go off on poor Rickie Fowler. But golf needs him more than it needs Tiger Woods. Men don’t wear what their wives want; they wear what golfers tell them to. Rickie Fowler is the reset button, the reality check, the “Dude, really?” needed for men who don’t golf — or golf well — but insist on dressing in golf costumes. Last weekend at the AT&T National, the 2010 rookie of the year reminded people looking for the next American hope that with no PGA wins he’s still the sport’s Anna Kournikova (he’s only 22; of course, so are Rory McIlroy and the LPGA’s Yani Tseng, who’s a win away from a career grand slam). The Fowler wardrobe, meanwhile, continues to evoke the Children’s Television Workshop.

Fowler began Day 3 in a blue that would give Gargamel fits, and concluded Day 4, having smurfed away his co-lead, in spray-on orange. It’s possible that, with his perfectly aligned anime face and hair that cascades from beneath his cap, Fowler is drawing tween girls and their older sisters to the sport of their fathers and brothers. But if having girls mob tour events for a brush with dreaminess keeps just one man from leaving the same tournaments hoping to dress like the ING logo, then so be it. A little Zac Efron, a little Justin Bieber, a little Leonardo DiCaprio, a little “Akira:” Fowler is the golfer genetically modified. Last Sunday, he looked like a tangelo.