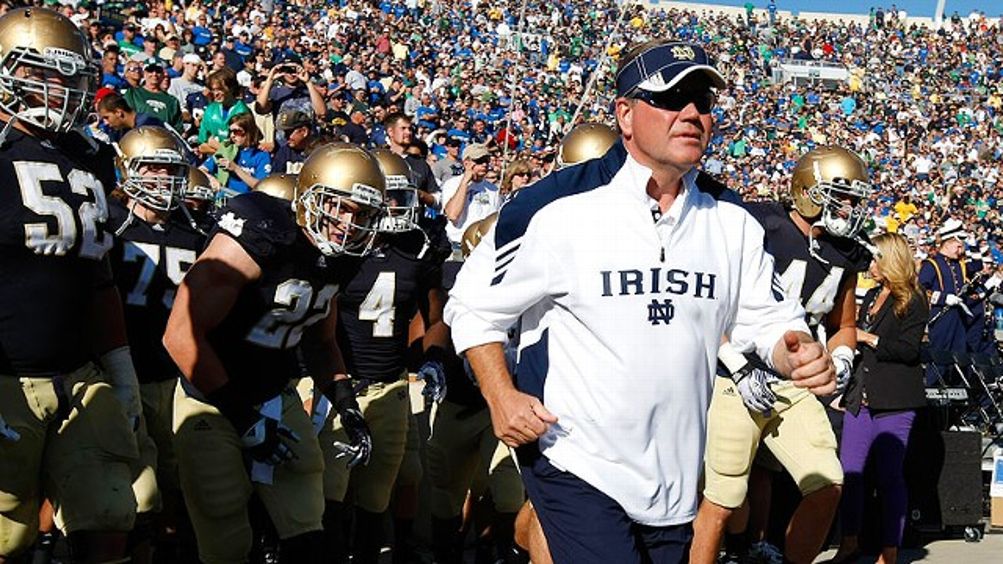 Let us begin by waking up the echoes of a half-century ago, because if we are to address the future of Notre Dame football, it’s pretty much impossible not to hearken back to the romantic myths of the past. In early 1964, a gregarious Armenian Presbyterian took up residence in the coach’s corner office of the Knute Rockne Memorial Building, and in February he slipped on a warm scarf and delivered a rousing sermon to 2,000 students at a spontaneous gathering on the steps of a residence hall. Thus began the Era of Ara at Notre Dame, with Ara Parseghian’s impromptu pep rally appearance heralding the rebirth of a program that had lain dormant for a decade while nearly drowning in its own apocrypha.

The Irish went 17-23 from 1959 to 1962. In 1963, they went 2-7 — and would have gone 2-8, if not for the cancellation of the Iowa game following the Kennedy assassination. But by November of 1964, under Parseghian, they were undefeated and on the cover of Sports Illustrated. “Notre Dame is winning again,” Dan Jenkins wrote, and the students at Notre Dame Stadium, typically quick to embrace miracles, serenaded their coach with the chant, Ara, Stop the Snow!1 Two years later, the Irish won a national championship, and in 1973, they won another. During Parseghian’s last home game as coach, the students again chanted Ara, Stop the Snow!2 and soon after, Parseghian joined Knute Rockne (1918-30, six national championships) and Frank Leahy (1941-43, 1946-53, five undefeated seasons and four national championships) in the Holy Trinity of Notre Dame football. Then it all unraveled once more, and — with the exception of one 11-1 season — the Irish spent the remainder of the ’70s and early ’80s taking chances on walk-ons and high school football coaches and losing in the Aloha Bowl.

Twelve years after Parseghian departed, an exceedingly clever West Virginian Ohioan named Lou Holtz took over. Holtz won 100 games and a national championship over the course of 11 seasons, and once again it seemed that Notre Dame was winning again and would always win again, merely because they were Notre Dame. But Holtz departed and eventually went on to pioneer cutting-edge methods of psychiatry, and 16 years later, here we are: The Irish have yet to win a single BCS game since its inception, they haven’t lost fewer than three games since the 1993 season, and they’ve cycled through five different coaches since Holtz, if you include the one who fudged his résumé and never coached a single game. They never connected with Bob Davie, they lost patience with Tyrone Willingham after three seasons, and they grew tired of Charlie Weis’s self-involved bluster after five mediocre campaigns.

And now they are starting to wonder about Brian Kelly, an Irish Catholic boy from Boston who arrived with high hopes. But after a pair of rickety 8-5 seasons, Kelly has yet to cultivate the kind of belief that Parseghian did in his first few months. The death of a student videographer during a windy practice session cast a pall over his first year; his second season was a turnover-riddled disappointment, and a few weeks ago, quarterback Tommy Rees was arrested after allegedly kneeing a police officer in the abdomen while escaping a house party being broken up on North Notre Dame Avenue.

“The question out there,” one Notre Dame alumnus told me, “is, ‘Does this guy get it?'”

The bigger question, of course, is whether anyone can really get it anymore. This is now the most fallow period in Notre Dame history; the longer it goes on, the more pervasive the sense that Notre Dame football is gone for good, that the Irish may hang around Saturday afternoons on a third-place network desperate for a foothold in the sporting universe, but will never really be relevant to the 21st century. With every Champs Sports Bowl defeat, the notion that a small, independent Midwest Catholic institution with high academic standards can become a national power — and can recruit nationally — in a sport weighted toward the South (and toward superconferences) starts to feel less and less tenable.3

“Davie and Willingham and Weis all led them to nine- or 10-win seasons,” says Lou Somogyi, a senior editor at Blue & Gold Illustrated and a longtime chronicler of Notre Dame football. “But can they get to that 11- or 12- or 13-game thing? It’s very hard. The world changes, and sometimes you have to be willing to change with it. Just because that’s how you’ve always done it doesn’t mean it’s right.”

This has always been the balancing act for the Fighting Irish — emphasizing tradition while maintaining modern relevance — and this is why the cult of personality at Notre Dame is more vital to its aura than at any other football program in America. Every college coach is a salesman at heart, but at Notre Dame, the pitch goes deeper: It must carry across every region of the country, it must echo through the hallways of Catholic schools from coast to coast, and it must sustain a myth 100 years in the making while also assuring 17-year-old recruits that the past is not all there is. The coach at Notre Dame must be a toastmaster with the alumni and a bullshit artist with the media and a dictatorial presence among his players, and he must be equally good at all three things.

“When you sign up for this job, that’s a major aspect of it,” Somogyi says. “You have to be the face of the program. It is unique unto itself.”

The esteemed raconteur Beano Cook, who enjoys engaging in hyperbole about Notre Dame, once called it the third-hardest job in America (behind the mayor of New York City and the president),4 and I think he was right in this sense: Because of Notre Dame’s singular identity, the job is more political than any other in college football. It requires an imperturbable, almost otherworldly presence — Michael Oriard, a respected professor and writer who played for Parseghian in the late ’60s, referred to his coach as “a charismatic, all-seeing god on the high tower at practice.”

This, I think, is why Notre Dame only thrives in certain periods: It’s not easy to find someone with such a bearing, and given the modern scrutiny of coaches, it gets harder all the time. Rockne and Leahy had it, and Parseghian embodied it, and Holtz could be prickly and disingenuous at times but he was also an incredibly skillful politician and first-rate big-game coach. Davie was deficient on both fronts, Willingham brought in some uncharacteristically poor recruiting classes, and Weis seemed like the best hope since Holtz until his self-aggrandizing rang hollow. Kelly strikes me as a very good football coach who hasn’t yet gotten a handle on the larger burden of the job, whose red-faced sideline tirades against his players have only diminished his stature.

Winning, obviously, burnishes one’s stature rather quickly, and it is very possible that Kelly will find a way to win 10 games sometime soon. But to get to 11 or 12 or 13, he’ll have to change the perception of who he is. He’ll have to become as much an “all-seeing god” as a football coach, and it is hard to imagine that a man who couldn’t prevent his own quarterback from allegedly plowing over a police officer will ever find a way to stop the snow in South Bend. Until he does, they will wait for the next miracle worker to come.