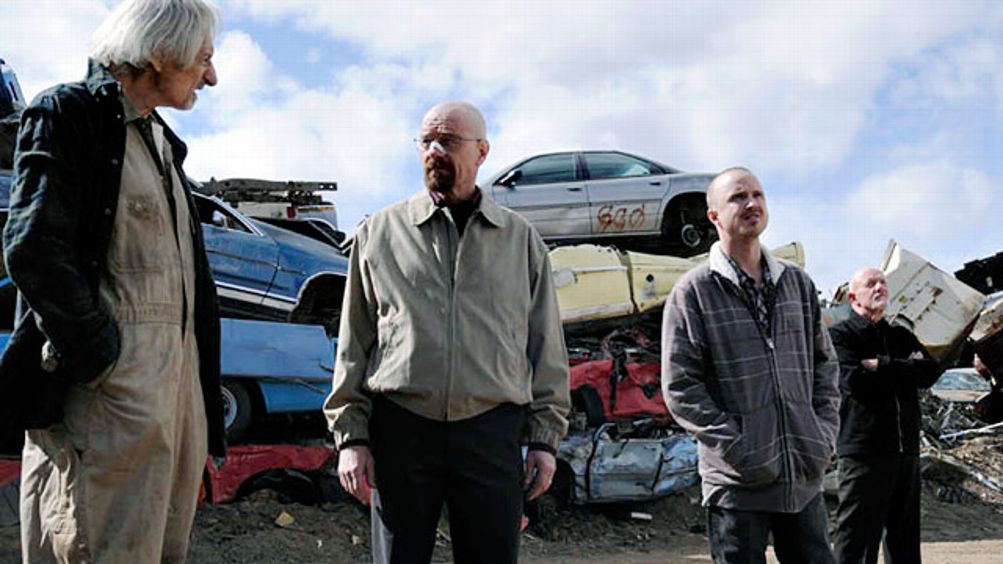 When it comes to science, writers tend to have more in common with Jesse Pinkman than Walter White. Sure, we all profit from it — just how do they make these words go onto the computer anyway? — but generally speaking, the only chemistry that interests the people running your favorite television shows is the kind that sometimes sparks between actors. In true English major fashion, the lion’s share of Golden Age shows concern themselves with interiority and ephemera: Think of the gauzy dream sequences of The Sopranos, or the cockeyed, continuity-free “reality” of Louie . Mad Men is the best-written show on television but it’s also the most written, using formalist flourishes to document the tormented psyches of its protagonists. There are plenty of consequences in the world of Sterling Cooper Draper Pryce, but they tend to be slow-burning and literary; months pass between episodes, a dramatic payoff arrives in the form of a knowing look. Last season, when Don strangled a former fling, it was a figment of a fevered imagination, a shocking act that was quickly and neatly stashed underneath the bed; a bad memory that didn’t leave a bruise. Just like it was for most professional scribes back in gym class, the emotional always trumps the physical.

By contrast, when Gustavo Fring kicked off the fourth season of Breaking Bad by butchering an associate like a kosher steer, it was both very real and a very big problem. Walt didn’t have time to agonize over the horror of what he’d just seen and its implications for his own long-term structural integrity; he was too busy scrounging up enough acid to melt the poor dead bastard down to primal sludge. That sort of moment-to-moment, cause-and-effect plotting is central to the DNA of Breaking Bad — which at times seems less like a TV drama and more like a terrifying chain reaction. From the instant Walter White set foot in that Winnebago, every single thing that’s happened — every rock cooked, every plane crashed, every breakfast eaten by the insatiable Walt Jr. — has been directly connected to that first fateful choice, an entire universe caught up in the whirring centrifuge where Walter’s morality used to be. There are no digressive montages, no cute walk-backs, authorial indulgences, or loose threads. Everything is connected and nothing is left behind. The stakes get higher and higher as the noose around the audience’s neck gets tighter and tighter. Unlike his more celebrated, cerebral peers, showrunner Vince Gilligan is a dedicated chemist, hell-bent on seeing his highly flammable, extremely risky experiment through to the bitter end. As it returns for the first half of its final season on Sunday, it’s worth celebrating Breaking Bad for what it is: a proudly left-brained show for our indulgently right-brained times.

Gilligan’s scientific bona fides have never been in doubt — no show on television is more meticulously constructed, or as unsentimental in its distribution of violence and despair — but what are we to make of the unraveling of his main character? Consider the way we left things in Albuquerque last fall. Despite Walt’s dramatic bit of braggadocio, there are no winners and losers in science. Merely results. The explosive season finale — in which the great Tio Salamanca finally had his bell rung and dapper Gus was unable to save face — was, when you think about it, nothing more than a targeted lab accident. Convinced that the Chicken Man no longer had any use for him, Walt whipped up a DIY IED and took out three lethal enemies with a single ding. The tricky part — as we see in “Live Free or Die,” the bracingly good season premiere — is going to be cleaning up the mess.

Walt’s OCD-ish insistence on proper hygiene and etiquette has been present on the show from the start, of course — he’s been lecturing Jesse about goggles and gloves since the kid was still dressing like an extra in an Alien Ant Farm video. But now it’s become pathological, an attempt to maintain a scrim of respectability on an increasingly unhinged and reckless enterprise. In this, at least, the once and future Heisenberg isn’t alone: A rigorous devotion to order is present in nearly all of Breaking Bad‘s characters, from Gale’s immaculate coffee percolator to the unhurried criminality of Mike Ehrmantraut — whose return from his forced Mexican siesta is one of the great pleasures of Sunday’s episode. Moments before his grisly demise, Gus Fring found time to adjust his Windsor knot, and even Skyler bought into her husband’s scheme once it became less about glassy-eyed addicts and more about the familiar world of accounting receipts. (The fact that a car wash is the physicalized embodiment of the White family’s dirt is one of Breaking Bad‘s many sly, dark jokes. From Bob Odenkirk’s sleazy Saul to Matt L. Jones’s sweetly empty-headed Badger, it’s remarkable how such a breathless show can so often leave you gasping with laughter.)

But the deadly and calculating scientist that Walter longs to be is again and again undone by his very human flaws. Over time, his vanity has proved to be more toxic than the cancer that kick-started his double life — Hank’s plenty tenacious, but he’d still be playing with his rock collection if Walt hadn’t bristled at the thought of his brother-in-law considering drippy Gale a genius. (Imagine! The only recipe he’d ever invented was for vegan s’mores!) As last season’s deadly escalation proved, supporting his family was merely the most enduring of the flimsy justifications Walt has cooked up over time. First it was his own health care, then Hank’s, then it became a self-perpetuating cycle, all to prove once and for all that timid high school teacher Walt is the person who knocks on doors, not the one cowering behind them.

The problem is, his ego trip is leaving behind a rapidly escalating body count. Last season Walt’s need to control the parts of life that can’t be crammed into a test tube put a 6-year-old in the hospital. His little experiment worked: Jesse flipped back to his side and Gus was taken off the board. But any lab instructor would tell you: You don’t do the test to get the result you want. You do it to get the result that’s true. By Sunday’s premiere, Walt has totally abandoned his evidentiary principles, insisting that a plan worked solely “because I [said] so.” The transformation is now complete; he’s swapped the white coat for the black hat.

Further complicating things in this final season is the sudden lack of structure that surrounds him. Gus is gone, the cartel leadership lies flopped across a sunny patio like a bunch of overserved spring-breakers. The Super Lab — that expensive shrine to professionalism — is torched. What’s left to motivate Walter White now except his own staggering hubris? For any other show, this bold clearing of the decks — not to mention the call sheet — could be cause for alarm, especially when things are meant to be ramping up for the finale. But creating and maintaining tension has never been much of a challenge for Gilligan and his staff, and neither has turning a potential deficit into an advantage. (Consider how the first-season-disrupting writer’s strike led directly to the densely plotted Season 2. Or how the smart casting of Giancarlo Esposito allowed Gus to emerge as television’s most memorable nemesis when it became clear that the Twins — intended to be Season 3’s primary antagonists — had to go.) Hitting the reset button this late in the game is a central part of the story — and the storytelling. How long can a kingpin survive when the castle walls have all crumbled around him? Who’s left to protect the man who keeps insisting he’d do anything to protect his family? As Wikipedia University teaches us, entropy is more than a theory. It’s a law.

What separates Breaking Bad from everything else on TV is this relentless focus. Every season has improved on the one that came before precisely because Gilligan is telling a single story, start to finish.

Of course, that won’t stop Walt from trying to fill the void himself; his appetite for relevance and respect are now stronger than Skinny Pete’s thirst for the blue. But the more interesting struggle will most likely be occurring just beside him. Strangely and slowly, Aaron Paul’s Jesse Pinkman has emerged as Breaking Bad‘s gravitational center. Yes, he’s a fuckup, but at least he’s honest about it. From the start he’s been desperate for a father figure, for someone to prop up his after-school special of an existence. Yet time and again we’ve seen him reject the macho bluster on offer from all the purported grown-ups around him, retreating instead into chemical numbness or the guilty voices in his freshly shaven head. In last season’s brilliant “Problem Dog,” he neatly summed up the show’s clinical moral code when he rejected his therapist’s touchy-feely, right-brained offer of “acceptance.” As we hurtle toward what seems like an inevitably dark end, there is no forgiveness for these people. But there are also no apologies.

As Chuck Klosterman noted in an essay last year, the trick of television is that we’re conditioned to root for Walter, even as his monstrous nature reveals itself. We somehow still want the best for these murdering drug peddlers, even though it’s become as clear as Walter’s crystal that breaking good would be impossible after so very much bad. For these final 16 episodes — eight this summer, then eight the next — to end in something other than death would require an act of God more miraculous than the one that befell poor Ted Beneke. Or, more accurately, it would require the meddling of an eager-to-please showrunner.

This, of course, will never happen. For Gilligan to intervene now — whether to satisfy the audience or artificially extend the drama — would betray the scientific method and compromise the integrity of the experiment he so carefully designed more than four years ago: What would it take to turn Mr. Chips into Scarface? What separates Breaking Bad from everything else on TV is this relentless focus. Every season has improved on the one that came before precisely because Gilligan is telling a single story, start to finish. His microscopic glare is as exhausting as it is exacting. (Watching one episode is thrilling. Watching two is euphoric. Three or more will leave you jittery and bleary-eyed for days.) In comparison to some of television’s more humanist and highbrow hours, Gilligan’s master class can occasionally seem cold. But it’s a seminar well worth taking. Breaking Bad is more than science. It’s intelligent design.