All the Kings’ Men 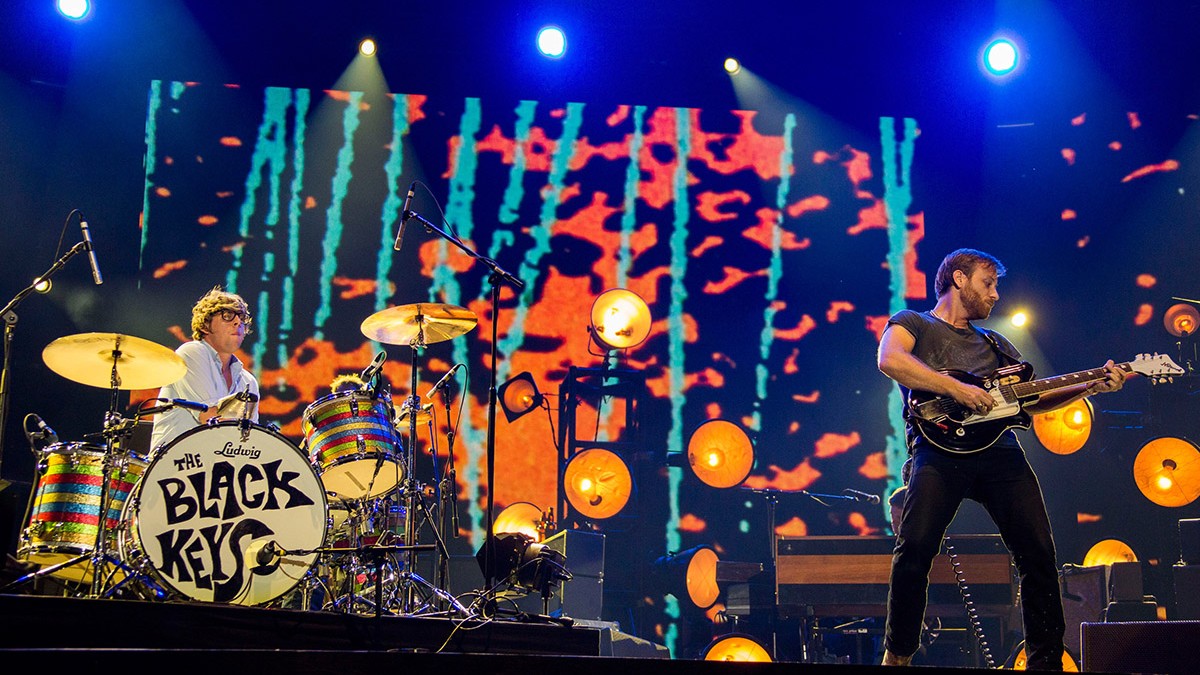 In another time, this would not be an unusual occurrence on a blues-rock record. But on their previous two albums, the Black Keys became the rarest of phenomena — a 21st-century platinum-selling guitar band — by de-emphasizing the guitar. The anchor single for 2010’s Brothers, “Tighten Up,” delivered its hook via an infectious whistle, not bloozy riffage. The big radio hits from 2011’s El Camino — “Lonely Boy,” “Gold on the Ceiling,” and “Little Black Submarines” — nodded to the spirit of Marc Bolan with minimalist, funky guitars girding the songs’ foundations. But the real meat on those tracks originated in the rhythm section and splashy keyboard accents supplied by Brian “Danger Mouse” Burton, the Black Keys’ shepherd into the world of disciplined pop songwriting.

What made El Camino a modern masterpiece of arena rock was the canny understanding of what puts butts in the seats of arenas in the modern era: punchy tunes you can dance to with the extraneous stuff (i.e., guitar solos) excised. “Guitar bores the shit out of me 99 per cent of the time,” Auerbach told Rolling Stone around this time, a weird but (again) smart bit of self-preservation for a contemporary guitarist in a guitar-averse time.

Auerbach’s solo on “Weight of Love” avoids the sort of fleet-fingered pyrotechnics that once drove Stevie Ray Vaughan’s face to flights of self-impressed ecstasy. For the white bluesman, SRV is what “Ice Ice Baby” is to the white rapper — part cautionary tale about what must be avoided, part original sin that can never be fully lived down.1 Auerbach’s playing instead recalls Neil Young, the one remaining credible role model for the prospective guitar soloist, mainly because Young’s guitar solos always sound like ornery, postmodern deconstructions of “impressive” guitar solos. Auerbach turns his ax in on itself on “Weight of Love,” sending each flourish in a horizontal rather than vertical direction, displaying and defying virtuosic technique, all the while signifying stunted self-defeat.

It’s probably not a coincidence that Auerbach’s embrace of guitar heroics coincides with his recent divorce and the attendant media fallout, which was at its worst when the bulk of Turn Blue was recorded in Los Angeles last summer. There are no atheists in foxholes, and no guitar haters in rock bands when romantic strife is nigh. By the time Turn Blue reaches its penultimate track, “In Our Prime,” Auerbach is shooting notes out of his fingers at a prodigious clip for a full third of the song, drawing out a coda that recalls Eric Clapton’s epic six-string wallow over Pattie Harrison at the end of “Layla.” I suspect that when the Black Keys play that one live, the people who got into the band after hearing “Tighten Up” in approximately 42 commercials will head for the bathrooms.

Make no mistake: Solos and heartbreak aside, Turn Blue (out May 12) is still very much a continuation of the Black Keys’ “pop” period. Ever since teaming up with Burton on 2008’s Attack & Release — he subsequently oversaw “Tighten Up,” and cowrote and coproduced all of El Camino and Turn Blue — the Black Keys have evolved into an R&B act with classic-rock trappings, keeping an ever-vigilant eye on snappy beats and mass-appeal choruses. In the process, the Black Keys became one of the only indie bands of the ’00s to achieve crossover success as legitimate mainstream superstars. At a time when an already fractured rock audience was splintered even further into Internet-centric “underground” and radio-oriented “anti-hipster” contingents, the Black Keys precariously straddled both camps without ever feeling totally at home in either.

“Taking old blues riffs, making up lyrics on the spot, and turning it into a song” was how Auerbach once described the songwriting on the Black Keys’ early records. That was before Auerbach became a perpetually busy producer of other people’s music — in the time since El Camino, he’s been the architect of standout records by a range of artists that includes New Orleans musical witch doctor Dr. John, Tuareg guitarist Bombino, blues-soul chanteuse Valerie June, and zombie prom queen Lana Del Rey. In recent years, Auerbach has remade himself into one of pop’s foremost craftsmen, and in Burton, he’s found a kindred spirit similarly fascinated with the past, present, and future of record-making.

If El Camino was an album designed to be played (and slayed) in the massive sheds where the Black Keys now ply their onstage craft, Turn Blue is rooted in the hermetic comfort of the recording studio. With Burton unofficially expanding the Black Keys to a trio, the music on Turn Blue pushes far beyond the constraints of a two-person guitar-and-drums duo. On “Fever,” a new wave–by-way-of–Del Shannon synth lick is the song’s most memorable feature, and it is as catchy as it is record-collector geeky. “In Time” is one of four tracks to feature the stellar backing vocals of Regina, Ann, and Alfreda McCrary, underlining the pronounced ’70s AM soul influence that comes through in Auerbach’s frequent (and disarming) use of falsetto. On the melancholy “back on the prowl” banger “10 Lovers,” the Black Keys even embrace disco, with Auerbach laying down an insistent bass line that’s pure dance-floor bait, in spite of the wallflower sentiments of the lyrics. “If I find another love / They must be forever true,” Auerbach sings, slumping into his upper register. “’Cause if someone breaks this heart / Your man right here is through.”

As musically expansive as Turn Blue is, lyrically it’s obviously personal, even insular. At times it’s easy to mistake Turn Blue for a Dan Auerbach solo LP. His private misery played out on music websites while he was making the record, so it makes sense that he doesn’t bother to hide it in his songs. Fresh hurt and unrepentant bitterness abound: “Why you always wanna love the ones who hurt you / Then break down when they go and desert you?” Auerbach sings on “Year in Review,” the album’s angriest breakup song — not that there isn’t plenty of competition for that distinction. On Blue’s biggest “rock” moment, “Bullet in the Brain,” the muscular thrust of the music can’t keep Auerbach from ruefully “Lookin’ back on where we used to be / Everything was clear, still I refused to see.” Auerbach’s commercial instincts are as strong as ever on the sparkling power-pop tune “Gotta Get Away,” but he’s an inconsolable host at his own party. “Maybe all the good women are gone,” he sniffs.

Here is a medium-bold prediction: Turn Blue will not do as well sales-wise as Brothers or El Camino, even if artistically it’s better than the former and just a half-step below the latter. For one thing, the Black Keys are due to not go platinum, for a rock band doing that three times in a row in this era would surely send the Earth spinning off its axis and hurtling toward a black hole called 1987.

Also, times have changed since the Black Keys last put out a record. Back in 2011, Auerbach and drummer Patrick Carney had their sights set on sweeping away Nickelback and the rotting vestiges of post-grunge. Three years later, Nickelback no longer seems like a relevant mainstream-rock bogeyman. Instead, a new generation of “silent-majority rock” bands have taken the Black Keys’ blueprint — less guitar, more pop polish — to new extremes. Now, I know it’s questionable to describe groups like Bastille, Kongos, and American Authors as “rock” bands. Classifying an assembled group of callow young men with incompetent haircuts as “rock” may in fact be an extremely boring form of profiling. But the prominence of these groups has changed the context of contemporary rock. Instead of being the ingenious upstarts with a new bag of tricks challenging the brutishly soul-patched old guard, even the Black Keys and its slickest record now sound positively grizzled next to the likes of “Pompeii” or the breathtakingly annoying (but impossibly earworm-y) “Come With Me Now.” The early numbers on Turn Blue seem definitive in this regard: The first single, “Fever,” didn’t crack the Top 10 on the Billboard rock charts. I’m guessing the fine but understated title track won’t either.

This seems, on some level, to be by design. Turn Blue is the melancholy capper on a trilogy of records where Auerbach and Carney became professionally wealthy and personally bereft. “The only thing I had left was my family and Dan,” Carney recently told the Guardian about his own publicly played-out divorce in 2007. “I put more effort into the band than I did my marriage; that’s a straight-up fact and that’s why it failed. I wanted the band to work. But I never thought it would actually work work.” Turn Blue doesn’t quite work work the way its predecessors did, and Auerbach in particular doesn’t appear interested in competing on the same commercial terrain. Turn Blue was made when Auerbach must have resented his hard-won status as a Famous Rock Dude for drawing unwanted scrutiny of the worst time in his life. The Black Keys still pulled a highly accessible and tuneful LP out of this period, because that’s the kind of LP the Black Keys make now. But this time they did it with (a little) more guitar, a strangely risky move in a strange time for mainstream rock. Guitar solos used to scream “Look at me!” On Turn Blue, the Black Keys seem fine with people deciding they would rather look away.