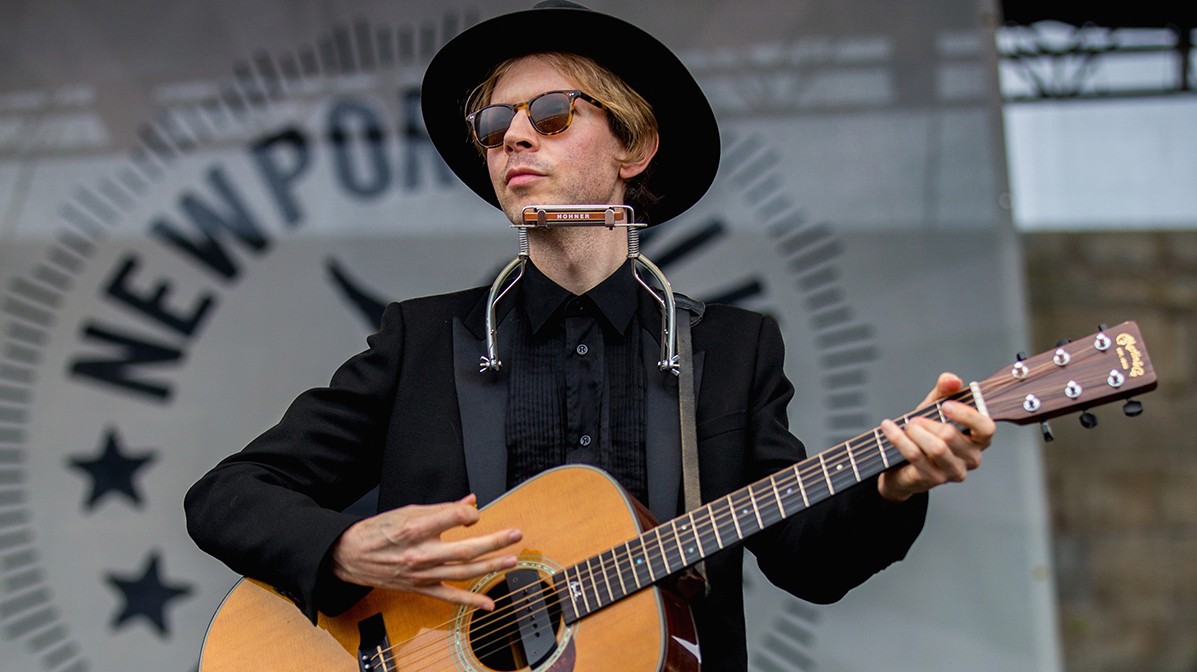 There is a new Beck album coming out next week. It is called Morning Phase. This is the first Beck record in six years, though it seems longer than that.1 Beck’s previous LP was 2008’s Modern Guilt, which he made in collaboration with Danger Mouse, who at the time was most associated with The Grey Album and the first Gnarls Barkley record, which I believe came out approximately 87 years ago. In recent interviews, Beck revealed that the extended break between albums was due to a serious spinal injury. Though he still looks like a guy who gets carded at bars, he will turn 44 in July.

If you know anything about Beck, you can guess what Morning Phase sounds like. He’s older now. He’s recently recovered from a spinal injury. His last few records have been ostensibly “funky” or at least noticeably syncopated, and precedent suggests Beck is due to make the kind of record he makes when he’s not making “funky Beck” records.

Even if you’re completely ignorant about Beck’s career, the title tells you a lot. Say it slow and with purpose: Morning Phase. (It’s pronounced like “mourning phase.”) Let it wash over you. Allow it to sink in and carry you away on soft, fluffy clouds like a hot dose of Quietus.

If you’re going purely off conjecture, Morning Phase has the trappings of a “sad Beck” record. And then you put it on and all remaining doubt instantly evaporates. After the brief orchestral interlude that opens the album, there is a ringing acoustic strum that sounds both majestic and narcoleptic. Drums pad softly into the frame, and are joined at a leisurely pace by Kubrickian space-age chimes that can be used only with express written consent from Nigel Godrich.2 “Woke up this morning, from a long night in the storm,” Beck mutters. There’s no sign of a storm, but he doesn’t sound fully awake yet.

If Beck himself hadn’t described Morning Phase as a companion of sorts to 2002’s Sea Change — he recorded it with many of the same backing musicians — anybody who heard 30 seconds of the record would immediately do so on his behalf. Morning Phase deviates from Sea Change like Anchorman 2 sets itself apart from Anchorman. It is grammatically impossible to be “sadder than sad,” but damn it if Beck doesn’t bend the laws of linguistics on Morning Phase in an attempt to out-frowny-face Sea Change.

There’s a parlor game people who still care about new Beck records in 2014 tend to play among themselves. It’s called “Which Beck Is the Real Beck?” Beck himself seemed to encourage it back in the ’90s and early ’00s. During this period, Beck consistently segregated his material into two columns — one was reserved for “irreverent sonic collage with a hip-hop sensibility” songs, and the other was for “more or less traditional folk-rock singer-songwriter” songs. Beck’s platinum-selling major-label debut, Mellow Gold (the one with his signature song/cultural albatross “Loser”), was quickly followed up in 1994 by One Foot in the Grave, a self-consciously “weird” (and frequently great) acoustic album released by celebrated indie K Records.4 In ’96, Beck’s most popular5 LP, Odelay, was released. Two years later came the comparatively low-key (and significantly less popular) Mutations. 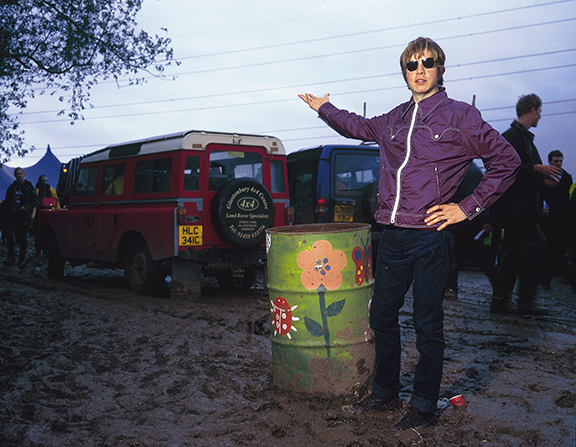 Then came the ultimate dichotomy in Beck’s discography: 1999’s ridiculous deconstruction/desecration/celebration of ’70s soul and contemporary R&B Midnite Vultures, and, three years later, the downbeat, psych-tinged, Gordon Lightfoot–on–bear tranquilizers breakup record Sea Change. Now, it’s possible to enjoy both Midnite Vultures and Sea Change. (In fact, appreciating that Beck is capable of producing both kinds of records is kind of the whole point of appreciating Beck.) However, it’s likely that deep down, you prefer one over the other. And the record you choose speaks to what you believe is Beck’s default position as an artist.

People who like Sea Change tend to think Beck is a conventional rock star who is capable of branching out into other genres, but whose “home” is guitar-based songs about alienation and longing. This perspective inevitably marginalizes a record like Midnite Vultures as (at best) an enjoyable novelty or (at worst) an annoying indulgence that detracts from his “real” output. However, if you lean to Midnite Vultures, you probably subscribe to the theory that Beck is a postmodern conceptualist who is incapable of “authenticity,” because authenticity itself is a sham and Beck’s art explores this. These people subsequently view Sea Change as simply another arm’s-length critique of an established trope — a “singer-songwriter record” rather than a singer-songwriter record — and get annoyed with those who interpret it as a more “honest” Beck album.

Is Beck at heart a sad guy who is occasionally funny, or a funny guy who sometimes pretends to be sad? For the record, Morning Phase neither adds nor subtracts from the argument. Rather, it reiterates the truism that Beck’s most intensely debated work is more than a decade behind him.

Gun to my head, I’m a Sea Change guy. Not because I distrust Midnite Vultures or believe Sea Change is Beck’s “confessional” Joni Mitchell record. (I don’t dispute the notion that “‘glum’ is a mannerism.”) It’s just that, in my estimation, “glum” suits Beck’s limited emotional skill set better than “hump-hungry extraterrestrial horniness.” Beck is the most ’90s of all ’90s pop icons, and the reason is the sense of detachment he brings to everything he does. He’s a cipher who blends into the impeccably curated walls of his songs. (On the emotional color wheel, Beck is translucent.) Those looking for a through-line in Beck’s work should zero in on the numbness at its core. Sea Change is no more personally revealing than Midnite Vultures. But numb can pass for “glum,” even if it’s coincidental.

That’s not to say that Beck is only at his best when he’s playing “sad Beck.” In fact, many of Beck’s best songs (“Asshole,” “Rowboat,” “Pay No Mind,” and “Jack-Ass” in whatever order are my personal favorites) have balanced a pained heart with sardonically arched eyebrows, a skilled application of numbness in the service of suggesting heartbreak as subdued by a snarky shrug.6 Beck used to be great at this trick, but he’s dropped it from his repertoire, which is a shame. Morning Phase, for one, could use a little more “Dead Flowers” and a little less “Wild Horses.”

As for the “Which Beck is the real Beck?” question, Beck indirectly offered his own take in a 2011 interview with Pitchfork’s Ryan Dombal. For him, Sea Change (which was “so straight ahead and all about the songwriting”) appears to be a personal standard that he’s tried to live up to ever since:

I’m more critical of my songwriting than anybody, but I’ve worked really hard in the last five to 10 years to improve. I didn’t take it all that seriously when I started. It was a little bit of a stigma to being a songwriter or a folkie back then, so you had to hide that with a lot of humor. I did a lot of send-ups of sensitive singer-songwriter stuff when I was starting out, which limited my development as a songwriter in a way. I wasn’t really fully given license to explore that until the mid-90s. I’m still working on it; I’m a little bit of a late bloomer.

The truth about Beck lies somewhere between his extremes: He’s a faker who wants to be real, though he can only be real when he’s being his true, fake self.

You can hear Morning Phase as an earnest attempt to make a “serious” record by a guy for whom matters of the heart (in his songs, at least) will always be a foreign language. Proper use of Beck’s long-standing emotional constipation aside, making it “just about the songs” does Morning Phase no favors. Nor does the release just a few weeks prior of Sun Kil Moon’s Benji, an instant classic of sad-bastard singer-songwriter-dom that underlines just how shallow Morning Phase is. Comparing two superficially similar but otherwise vastly different records is unfair, I know. But it’s something humans inevitably do, and the “you are there, inside Mark Kozelek’s head” specificity of Benji renders the vague ruminations of Morning Phase especially bathetic.

Let me put it this way: On Benji’s closing track, “Ben’s My Friend,” Kozelek tells a story about buying $350 lampshades while in the midst of a quasi nervous breakdown. The song delves deep into neuroses stemming from Kozelek’s professional jealousies and artistic inadequacies. It draws you into personal territory that people generally try to avoid in their own hearts. (Also: It’s really funny.) Beck, meanwhile, just shows you some really nice lampshades.

I’ve played Morning Phase a lot in the past week, because it’s a very easy record to have on. At least three songs (“Say Goodbye,” “Blackbird Chain,” and “Waking Light”) can be aptly described as gorgeous. It’s undeniably pleasant music. But peering inside those sleek, circular contours reveals a whole lot of nothing. What are these songs supposed to signify? Sea Change was tied tangibly to romantic loss; Morning Phase was made by a contented suburban husband and father. Why would that guy make this record? Is Beck in the midst of a midlife crisis? Is he reflecting on past traumas? Or does he merely need a good, long nap? “Tell me I’m dream, dream, dream, dreaming and I’ll never wake up,” Beck sings on “Blackbird Chain.” Actually, I think he’s talking in his sleep.