The GM of the Future 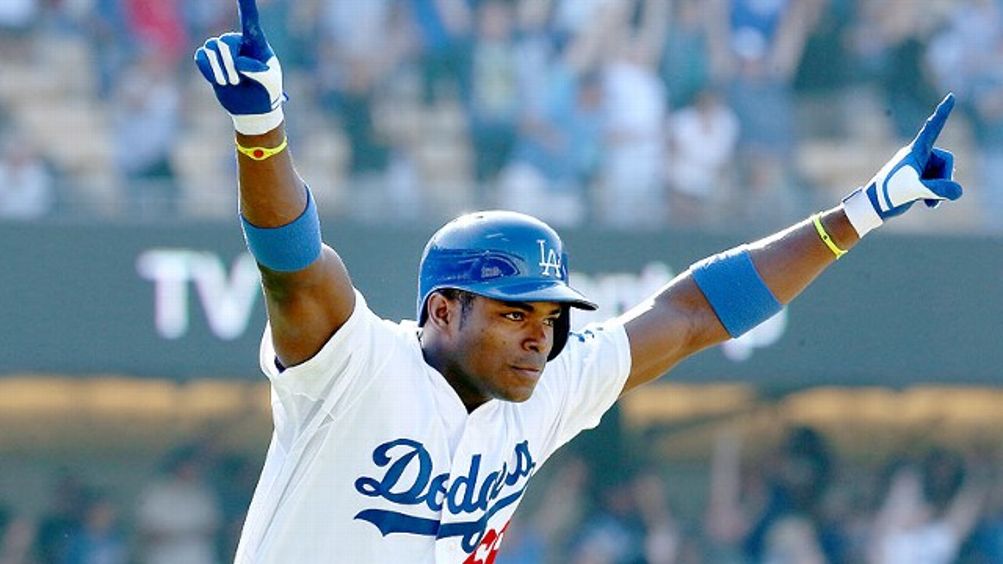 This was supposed to be a story about why I love certain baseball players, why I love everything about them — the home run bat toss, the divadom of the between-pitch stroll away from the batter’s box, the scrappiness, the cockiness, how much they’ve obviously worked to get the shirt under the jersey to cooperate with both a tattoo sleeve and an anaconda of a gold chain that supports a cathedral-ready diamond crucifix. I love that they know they’re being watched and adjust accordingly. I love that more often they don’t know. I love the shampoo commercials. I love the swagger. I love the hair.

These guys have all of that. Yet I feel alone in loving them. That’s baseball right now, a sport with an embarrassment of superstardom hiding in plain sight. You survey the league and see all these guys — Yasiel Puig and Bryce Harper and Mike Trout and Dustin Pedroia — and it’s like staring up at a planetarium ceiling with the lights still on. The lack of stardom isn’t about a dearth of pure, fantastic baseball. This is a terrific moment for that. This is about the league looking at a trove of exciting players and failing — or refusing — to force them on America.

It’s early for a couple of these guys, sure. Harper isn’t even of legal drinking age. But other sports haven’t wasted any time turning players into household-ish names. Blake Griffin tried to sell us a Kia before a lot of us had even seen him play one minute of professional basketball. The NFL stuffed Robert Griffin III into a cannon and blasted out RG3 confetti.

What’s a casual baseball fan to do? Where’s the human equivalent of a summer jam, a dude we can spend the summer rockin’ out to? The beautiful baseball body is covered in layers of fabric and hair. Baseball’s front offices remain hung up on steroid shakedowns. It’s a scourge that rendered the recent Hall of Fame induction ceremony a ghost story. The league is too busy defending itself against the transgressions of old stars to go out on a limb for new ones.

On the ground, baseball’s attachment to its regions — with heritage nights, kids’ days, military tributes, health initiatives, and anti-bullying and anti-violence campaigns; even with dubious stuff like fashion shows and players’ wives auctions — ensures community endearment. The sport shouldn’t have to thrive on localism alone, but maybe it’s just easier that way. Maybe we haven’t entirely forgotten the late 1990s. Maybe we can’t because that era still ripples into 2013. But for baseball, now more than ever, some risk is in order. 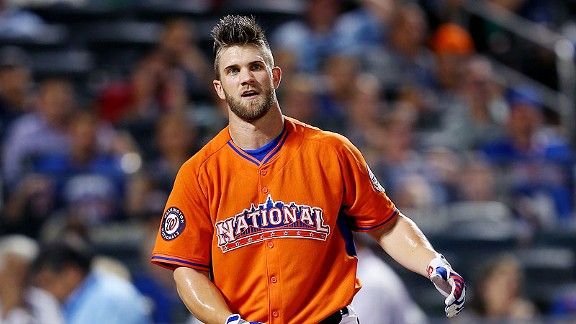 Baseball has a great window at the moment. The other three major sports are taking it easy. It’s possible we no longer have the attention span — if we ever did — to sustain interest in a season that lasts more than half a year, or in three-and-a-half-hour games that, on average, feature only 17 minutes of action. But this isn’t about how long a season lasts. It’s about taking a dude and making him sell us a car, and in selling us the car — or the insurance policy or the flat-screen television or the Pizza Hut Big Dinner Box — he also sells us the sport.

A certain class of player seems more than capable of that sort of salesmanship. A guy like Harper seems made for right now. He has a salty all-Americanism that can be tweaked for mockery or suavity or awesome extremeness — earlier this year he sprinted into the outfield wall. He also has that hair, and the hair is a big deal. For one thing, it’s cool. For another, Harper is really into how cool it is. The hair gives him a look. Actually, with a variety of beards, it gives him a lot of looks. There’s sexy waiter, mean barista, distracted biker, varsity wrestler, “Williamsburg,” “Mission,” Portlandia, “this old thing?,” “come ‘ere, girl,” and “Dante at F.S.C. Barber cut it.” Harper has hair you envy, hair you marry, hair that gets you divorced. And the thing about that hair, the thing that makes Harper a star, is that it’s he who has all the control. The hair’s never wearing him. It’s cooperating, declining offers to tour with Robin Thicke.

For whatever reason, hair is actually where the MLB is meeting Madison Avenue. Last year Joe Mauer did an ad for Head & Shoulders in which he used the occasion of a foul popup to pitch the shampoo to a lusty woman in the stands. This year Head & Shoulders asked C.J. Wilson to push its new Old Spice line, primarily by standing in front of a blue background while nonsense happens around him. But baseball-wise, the spots feel a little defensive (FYI: Old Spice is a sponsor of this site). For one thing, Wilson often just stands there in his Angels uniform, giving you no sense of athleticism. For another, the modern sport ad has to work visually since a not-insignificant portion of the audience is looking up from somewhere in a bar that has the sound down.

Anyway, as good as at least one or two of those ads are, you watch them and wonder (1) whether poor, disregarded David Wright is like “AYFKM with this?” and (2) how Troy Polamalu has poured so much charisma and audacity and actual hair into his Head & Shoulders campaign. You feel like Wilson deserves his own vehicle instead of a more sedate cousin of a football player’s. This is to say that it’s possible Harper has surveyed the advertising landscape and deemed it flat. Perhaps he’s waiting for an opportunity to be someone other than Mr. Clean (again: poor David Wright). He’s modeled Under Armour boxer briefs and done some shoulder presses in a big Under Armour TV ad. He might be the first post-steroid-era player to argue for the spectacle of the body. Either way, he probably doesn’t want to push shampoo, since he appears to be the only man in the United States who understands that one key to great hair is not to overwash it. 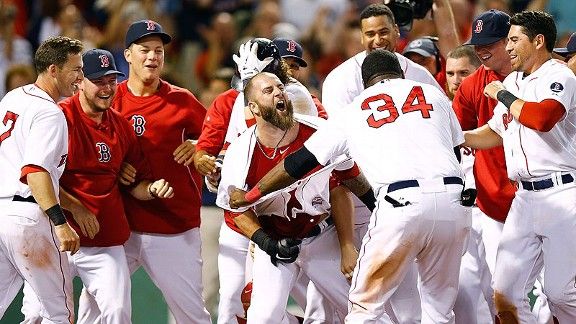 Harper and Puig should be looking for ways to showcase their swagger. Puig’s will be slightly harder to push since it’s so intense. He’s already chomping on stogies and rubbing elbows with the rich and famous, and he appears to have worked on his home run bat drop and base-rounding trot the way some professional wrestlers practice their finishing moves. Last week, he did the whole thing for a homer that, hilariously, turned out to be a double. Those Head & Shoulders ads also claim to boost a dude’s confidence. You don’t need shampoo for that. Just bottle Puig.

Of course, the league may not feel it can risk singling out an individual’s swagger for new stardom for fear of getting burned by the flame of the steroid scandal. But there are entire teams whose bravado deserves national promotion: How about the Pirates and the Tigers and the Rays? Then there are teams like the Red Sox that scarcely need attention but manage to turn heads anyway. There are two ways to love baseball — as someone who loves the sport and as someone who loves the culture around it. Neither has to happen to the exclusion of the other, but the current Red Sox can leave both parties besotted.

Boston has the scrappy look of a team with half its payroll. The money is something you don’t want to think about with sports. But sometimes it’s just there. The Yankees and Dodgers just look expensive. These Red Sox look like they’re starring in a movie about a last-place team that has found itself in first. There’s a guy — Jarrod Saltalamacchia — who has Matthew McConaughey’s perpetual wetness but whom everybody calls Salty. There are enough tattoos to warrant a cable reality series. And the designated hitter — David Ortiz — recently cursed out the umpire who ejected him and spent his unused at-bats on the dugout telephone. Even the good-natured, sweet-faced Native American kid — Jacoby Ellsbury, who’s 29 — is now frequently covered in stubble and steps into the batter’s box with “N—-s in Paris” playing behind him.

You can surmise both where the money’s going (Pedroia, for instance, just signed a $110 million contract extension) and where it’s not (good tailoring, razors, yoga). These gentlemen look tough and relentless and hungry. They have an edge. On July 21, in the 11th inning against the Yankees, the severely bearded, heavily inked Mike Napoli hit a game-winning walk-off home run. The team took the field in the usual celebration that often ends with the game winner losing some of his clothes. But Ortiz ripped open Napoli’s jersey the way Hulk Hogan used to tear off one of his T-shirts. American baseball is having a great summer. Madison Avenue and, to some extent, the baseball industrial complex are crazy to look the other way. So are we.