Ephraim Salaam on the Repercussions of Being an NFL Athlete 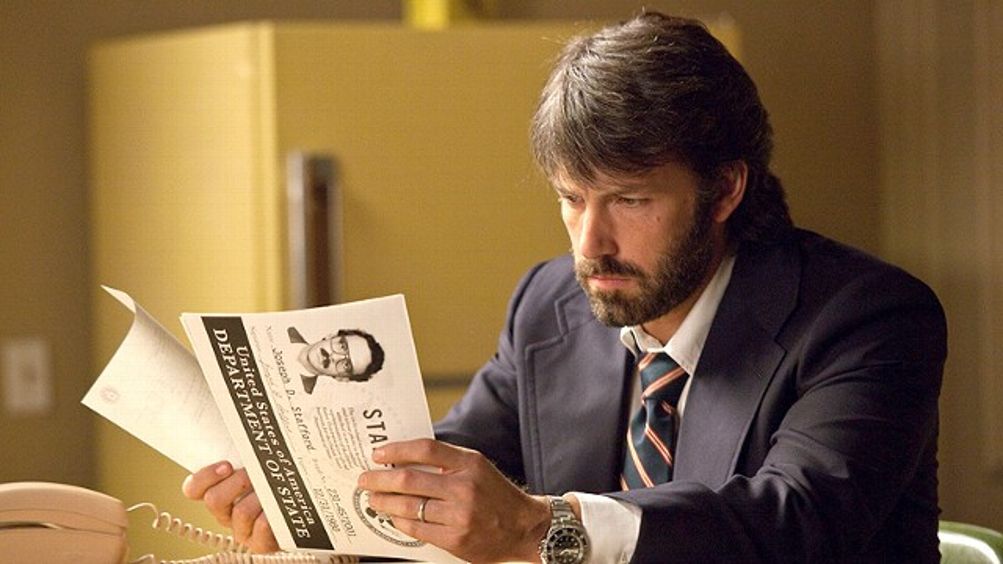 To say that Ben Affleck’s spectacular Argo is about movies would be reductive — it’s also about the 1979 U.S.-Iran hostage crisis, a ridiculous real-life CIA plot to rescue six escaped American embassy employees from Tehran, ’70s haircuts, boxy thick-framed glasses, and the dangerous complacency of bureaucracies everywhere. But it is at least in part about movies. It’s about the cynical people who make them; about the way the film industry parallels, in all sorts of happy and unhappy ways, the intelligence industry; about how useful fictions can save lives or ruin them. It’s about all the ways in which Hollywood is ridiculous and self-regarding. And it’s also very much about the way that the town, corrupt and venal though it is, can nevertheless be redemptive for those involved in it. Which Ben Affleck, of all people, can attest to.

Argo is Affleck’s third feature as a director and by far his best, which is saying something considering that the other two are the grimly textured crime drama turned pitiless moral fistfight Gone Baby Gone and The Town, as good a heist film as was made in this century. The director’s newest tells the recently declassified story of the sham sci-fi movie — “a twenty-million-dollar Star Wars ripoff” — the CIA really pretended to make in order to rescue those six Americans in Iran: The idea was that they would pose as a Canadian film crew scouting locations and thus be allowed to leave the country. Affleck plays Tony Mendez, the real-life CIA exfiltration specialist who smuggled himself into Tehran in order to bring them out.

The film is at once a virtuoso ’70s-style thriller complete with smoky political back rooms, bad hair, and virtuoso dialogue and one of the best Hollywood satires anyone has made in years. When Affleck’s Mendez first goes to L.A. to solicit the help of actual Oscar-winning Planet of the Apes makeup artist John Chambers (played here by John Goodman) and the slightly more fictionalized producer Lester Siegel (Alan Arkin) to make his fake movie, the three men go over logistics. Can Mendez, once in Tehran, really take six embassy employees and, in only a matter of hours, turn them into a plausible film crew? Chambers snorts. “You can teach a rhesus monkey to be a director in a day,” he says.

Which, back in his Golden Raspberry days, is pretty much how Affleck was regarded. It’s hard to explain for those who weren’t there how bad this got, circa 2004. It wasn’t like people doubted that he would one day go on to become one of the elite directors in Hollywood. People doubted whether he would ever again produce a performance more compelling than pumping Jennifer Lopez’s gas to the melancholy sound of a cackling Jadakiss. Now he’s directed three stellar movies in a row, with this last one, Argo, pretty much a lock for a Best Picture nomination. It’s not quite my favorite movie of the year, but it’s close. It could easily, justifiably be yours.

There’s a moment in Argo when, briefly, the Affleck we once knew surfaces. In the film, as they were in real life, the American embassy employees are hiding out in the Tehran home of the Canadian ambassador. When Affleck’s Mendez — in full, resplendent ’70s beard, hair-shag torturing his own trench coat collar — arrives at the door, the ambassador is confused: He’s expecting a clean-cut J. Edgar Hoover type, and says as much.

And that’s when we get it: The ambassador turns back toward the house, and the smirk begins to spread across Affleck’s face, eyes rolling skyward. That self-satisfied twist of the mouth, the weary, superior look … we know that guy. It’s what most of Affleck’s characters, from the slavering frat-terror in Dazed and Confused and rock-breaking construction worker in Good Will Hunting all the way through the dark days of Gigli and Daredevil, once had in common — this smug, charismatic lout portraying them. So there’s that shock of recognition. But mostly what you think is: Man, how did that guy become this one?

I went back and watched Gigli. I’d never seen it before. I suppose you’d have to be older than 25 or so to remember the degree of outrage and incredulity that surrounded the movie at the time. It was pulled from theaters after only three weeks. When FX premiered the film on television in 2006, the network used the tagline “The most talked-about movie you never saw.” If it came out now, Twitter would suck the meme-life out of it in an hour. But back then you just did not stop hearing about Gigli — it was a punchline for literally years.

Here’s how IMDb summarizes the plot: “The violent story about how a criminal lesbian, a tough-guy hit-man with a heart of gold, and a retarded man came to be best friends through a hostage.” Affleck plays the tough guy with a heart of gold, which is to say that even though the Lopez character is a “fucking untouchable, un-haveable, unattainable brick wall fucking dyke-a-saurus rex,” in his words, he’s still in love with her. The film is even worse for its inclusion of a not-terrible Justin Bartha turn as a disabled guy looking for love and happiness; it’s like the rest of the movie is an insult to the tiny sprout of feeling Bartha sneaks into it. When J.Lo gives up her token lesbianism under the spell of Affleck’s pompadour, she points to her vagina and says: “It’s turkey time. Gobble gobble.”

“People bring up 2003, and I get it,” Affleck told our pal Mark Harris recently. “Jennifer Lopez, and Gigli, and all this shit just kind of blew up. But, you know, in 2003, Barack Obama was a state senator in Illinois! OK?” Which is totally fair; I just spent two paragraphs writing about a nine-year-old movie that Affleck’s disowned for eight and a half of those years. He had a bad run — The Sum of All Fears, Paycheck, Daredevil, Jersey Girl. Pearl Harbor, if you don’t happen to be a fan of the lesser Michael Bay or the concept of lighting millions of dollars on fire just to watch it burn. In 2006 Affleck was cast as George Reeves in Hollywoodland, playing an actor stuck in a humiliating Superman suit who knew in his heart he was capable of more. Gone Baby Gone came out the next year.

These days Affleck’s transformation into a reliably fascinating director and amiable, earnest student of film history — The Town was an unashamed homage to The Friends of Eddie Coyle; for Argo, he cites All the President’s Men, Cassavetes’s The Killing of a Chinese Bookie, and even Slap Shot — is so complete and self-evident that no one even really bothers to question it. He’s far from the first guy to unhex his image as a frivolous person by directing films — George Clooney and Clint Eastwood, among many others, did it too. Like Clooney and Eastwood, Affleck even gets a certain artistic leverage from his own checkered past — that’s one of the reasons the Hollywood stuff in Argo is so delicious.

It’d be nice to put together a grand theory of how or why this happened, but probably the only real moral here is that Hollywood makes tons of terrible movies all the time and if you’re not paying attention you might end up starring in like 12 of them in a row. If 29-year-old Ben Affleck had had Ben Affleck movies to star in back then,1 we wouldn’t be having this conversation.

It’d also be nice to be able to put together some grand argument as to why Argo is so good, but one of the main ways it’s good is that all its charms are blatant and obvious and readily available on even a casual viewing. It’s tremendously well-written — screenwriter Chris Terrio, liberated from the burden of invention by the amazing true story he was handed, is freed here to fill in the blanks with rapid, terse, and wryly funny (“You’re worried about the Ayatollah? Try the WGA”) dialogue. Affleck pulls that subtle, useful trick of casting great actors all the way down through the film’s most minor roles — Christopher Stanley, Bryan Cranston, Victor Garber, Kyle Chandler, and even Philip Baker Hall all show up to steal one or several scenes. And Affleck, who is himself onscreen nearly the entire time, plays Mendez in an exceedingly quiet way — you get the bits of super-competent agent talk (“Ex-fils are like abortions. You don’t want to need one. But when you do, you don’t do it yourself”) and a couple of moments where he rallies whatever room he’s in, but in general, he just gets out of the way.

The film is kind of a three-for-one deal. You get the hectic, expository intro, as the embassy is stormed and the script fills in the backstory in order to explain why exactly what you’re seeing happen is happening. Then there is the gleefully seedy trip out to Hollywood — Alan Arkin masterfully channeling every bit of miserable industry experience he’s ever had; a table reading for the fake sci-fi film with an ersatz purple Chewbacca and a wavy-haired Mark Hamill doppelgänger — done in loving, knowing detail. And, finally, the movie’s mercilessly suspenseful third act, as Mendez and his charges make their way toward the airport just ahead of the men who are hunting them.

Argo, in short, relies less on any kind of singular auteurist genius than on a whole mass of people — actors and editors and set designers and, yes, its quiet lead actor and exceedingly competent director — doing their jobs well. It’s not quite a blueprint for anyone else — Hollywood has learned the hard way, and to its perpetual detriment, not to bet on execution.2 But the recipe’s worked for one once-struggling actor, who has just made a great movie in part because he finally took seriously the task of being merely good.