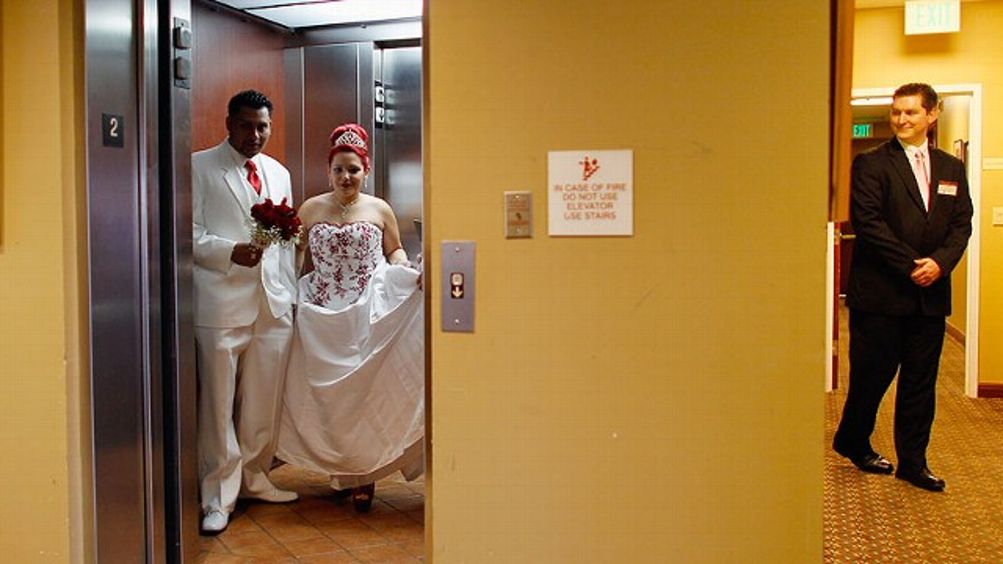 Unlucky in love? Single for the holidays? Reading this on your iPad from the couch while listening to Mariah Carey and wearing your favorite and therefore most disgusting pair of sweatpants and balancing a bowl of kettle corn on your chest? Well, you’re in luck, because the hottest trend in LOVE right now is perfect for layabout stoners or vampires allergic to the sun. That’s right: To meet the man or woman of your dreams, look no further than your own apartment building!

You may have only barely noticed that woman who’s always rummaging around in her giant rucksack for her keys and totally blocking the front door, but she might be the future mother of your kids! That guy in 5A who gets like 15 packages from Amazon every day? He’s Primed and ready for your affection. The girl on the first floor with the sheer blinds whose windows you can totally see into when you walk down the street clearly just wants to let you into her world. Stay away from the man who is always blasting Bruce Springsteen, though — I heard he’s only subletting through Airbnb.

Stacy Gordon was not interested in Steven Tulgan when she first met him through the typical channel of mutual friends. “He has a quirky sense of humor, and I didn’t get it at first,” she recalls.

Upon discovering that they lived in the same East Side apartment building, however, they started doing laundry and watching movies together. They became friends and got to know each other without the anxieties of a romantic relationship.

Sounds like they were already acting like most married couples! As for the sense of humor, “Ms. Gordon says she has come to appreciate it.” I bet it was all the starch jokes.

Russell Norman had spotted Channah Farber on the subway a few times as well as in his Washington, D.C., building: “One evening, when they were in the building’s mailroom, he introduced himself,” their wedding announcement concludes, leaving me with far more questions than answers. What was his opening line? I hope it was “Never stops comin’, eh?” and that he drew a snort of annoyance from the building’s postal worker.

Phoebe Harvey and Marco Barcella had lived in the same small building for six months before running into each other, but when they did, it was magical.

The building’s extremely slow elevator was to play an outsize role in the beginning of their romance. That night, when Dr. Harvey went to get her mail, Mr. Barcella decided to hold the elevator door for her. By the time they got to his floor, Mr. Barcella found himself again holding the door as he fumbled for his business card.

“It was opening and closing a million times — it was getting embarrassing,” she said.

Ah, the trembling hands and sweaty brow of neighborly love! Hey, it worked: “As soon as she got to her apartment, she called one of her best friends and told him the good news. ‘He asked, “Have you met your husband?'” (What do you want to bet the best friend had a total crush on her and that phone call ruined his year?)

There you have it, folks: permission to never leave your building. If you live in a single-family home, move immediately to a cramped city with a death trap of an elevator. You’ll thank me in, at most, six months.

As always, a big thanks to Friend of Grantland Alex Morrison for helping with this month’s Society Scorecard, based on our proprietary NUPTIALS algorithm. This month’s grand-prize winner is a couple who, collectively, hold degrees from Brown, Yale, Columbia, Cambridge, the London School of Economics, and Harvard; as if that isn’t enough, the groom’s family company owns both a cattle ranch and a citrus farm — while the bride’s father studies lions and hyenas. (Anyone who ever did the thing in elementary school where their parents came in and talked about their jobs ought to be really jealous of that last part: Imagine the social currency you could have accumulated with the 8-year-old set if your dad strolled in among all the accountants and regional sales managers with a BABY FREAKIN’ LION.)

Sorry, “descendant of Eli Whitney, the inventor of the cotton gin, [as well as] a descendant of the first mayor of New York City, Thomas Willett, who was appointed in 1665” … you may have been married at Westminster Abbey to a man with four first names, but that’s still good for only second place.

And now for a few marital odds and ends: You know, those lovely pieces that don’t really fit anywhere, like the gorgeous soup bowls from your registry that you now have to store in the coat closet because you live in an NYC apartment (where you met your beloved) and there’s no room for all of these gifts, and why on earth did you think you were going to need eight crystal soup bowls anyway?

I‘ll close with the very best line about love and marriage from the month of November. It came, randomly enough, from actress Viola Davis, who made a cameo in this lovely “Vows” column about her friend Edwina Findley, an actress in The Wire and Treme who wed a man she had known through her church for years.

“All of that stuff — the red carpet, the makeup — it’s very fleeting and it’s not real,” said Ms. Findley’s friend Ms. Davis about the perils of being a couple in the limelight. “I know one celebrity who, after being on the set, came home and said, ‘You can’t expect me to take out the garbage after I’ve been to the moon.’ His marriage failed. Because you can expect someone to take out the garbage. Because that’s life. That’s real.”

Oh, and regarding garbage? Meeting in the trash compactor room in an apartment building is totally something that hasn’t been claimed yet, as far as I’ve read in the Times. Get to work!