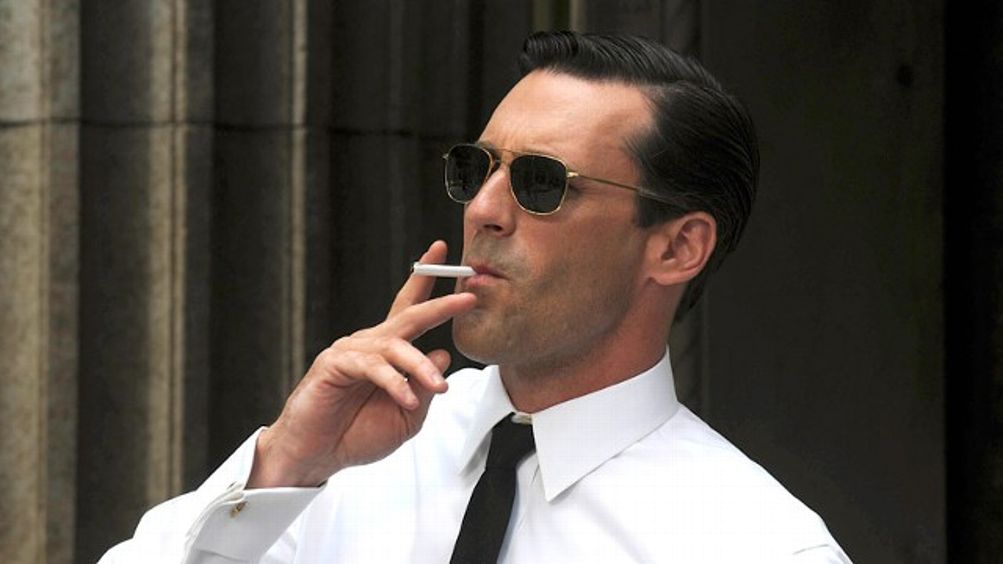 In 1927, God, or a 15-year-old Utahan named Philo T. Farnsworth, invented television. And it was … OK. Seventy years or so passed in relative adequacy. Father Knows Best begat All My Children. There were cults of Johnny Carson (son of Jack Paar, son of Steve Allen, son of Esau) and spinning Wheels of Fortune. The false apostate Willis was questioned. Grits were kissed.

But lo, in time, there was born unto television a savior. The gnomic prophet named David Chase came late to his assumption, after spending years of creative feast and famine toiling in the predictable fields, threshing network wheat and writing episodes of Kolchak: The Night Stalker. But in his 54th year, there came unto Chase a revelation, an otherworldly vision of multifaceted meatballs and grinding goomahs. In 1999, Chase’s rapture led him out of the desolate north — or at least Northern Exposure — and into the land of milk and honey: HBO, a place that claimed not to be TV, yet ironically could only be viewed on it. In the last year of the 20th century, David Chase gave us The Sopranos. And we looked upon his creation. And it was good.

The so-called Golden Age of Television began that January night with James Gandolfini stressing over the ducks in his backyard, and it signaled a sea change in popular entertainment. During the roughly 10-year period that followed, the small screen went from being cinema’s idiot brother to the last auteur-driven mass medium. What was once seen as a cul-de-sac of hacky cops and laugh tracks became a thrillingly limitless canvas for storytellers and creators. The Golden Age brought us the taut urbanity of The Wire, the soulful rusticity of Friday Night Lights, and the manic insanity of Arrested Development. It put polar bears in the tropics and profanity in the Old West. And then, without fanfare, it was over.

In a conversation last summer, Shawn Ryan, himself the creator of one of the Golden Age’s finer scriptures, The Shield, pegged the end of the era to the fall 2010 premiere of The Walking Dead. Not as any referendum on the zombie show’s quality but more of what it signified: by tripling the potential audience for a cable show and by doing so with genre spectacle, The Walking Dead was television’s Jaws moment. Like the flowering of American film in the ’70s, TV’s Golden Age was the product of new companies (or, in this case, channels) empowering creators because they didn’t know what else to do. The blockbuster success of The Walking Dead — along with Game of Thrones and True Blood — provided a way out, or at least around, the complicated power dynamic of the omnipotent showrunner. Vampires and dragons are, after all, far more dependable draws than David Simon’s cantankerous take on the social safety net. (To my mind, the Golden Age was also sunk by the rise of prestige simulacra, hollow shows like The Killing and Hell on Wheels that ganked the ponderous pacing and adult themes of contemporary critical darlings without any of the singular wit or perspective.)

But like the Komodo dragon or Kirk Cameron, a few Golden Age shows remain in production even if their evolutionary time has passed. Larry David will keep kvetching as long as there’s bile in his body, and the brilliant Breaking Bad has one more batch of crystal to cook. But with three full seasons stretching out before us like the red carpet at the Clios, Mad Men will be the last of the Golden Age shows to grace our flat-screens. With a typically outstanding new episode, the first in 17 months, due to premiere on Sunday, it’s worth asking: Is it also the best?

The line of inheritance from first to last is almost too neat: David Chase hired Matt Weiner to the Sopranos off of the cigarette-stained spec of Mad Men, a script originally written by Weiner in an aspirational frenzy while toiling on the Bronze Age Ted Danson sitcom Becker. Weiner’s infamous penchant for micromanaging and rewriting was learned at the foot of Chase, and Don Draper is a direct descendent of Tony Soprano; the two share a charismatic corruption, the last of the troubled titans. But this is where the comparisons end. The Sopranos, in all its digressive genius, was a show dedicated to the impossibility of change. Season by season, Chase built a red-sauce-spattered shrine to a lifetime of lessons learned on Dr. Melfi-esque couches: that people are who they are, no matter what. At its core, The Sopranos was Chase’s grand F.U. to all the hard-worn stereotypes of Television 1.0, the boring brontosaur he’d finally managed to dump in the Meadowlands. There was no hugging in Tony’s New Jersey. No learning or smoothing or straightening. Tony Soprano was Tony Soprano: an amiable monster. In the end, Chase argued with nihilistic aplomb, it doesn’t much matter how the Satriale sausage was made, just whether it was spicy or sweet. And when he began to feel revulsion toward his audience’s bloodlust, he denied them even that: The finale’s fade to black ensured Tony would be stuck with himself for eternity. To Chase it was a fate worse than prison or a slug to the head from a mook in a Member’s Only jacket; a karmic feedback loop in the shape of an onion ring.

Mad Men is different. It’s less dark and more expansive than its ancestor because, unlike Chase, Weiner isn’t asking questions that he’s already convinced himself can’t be answered. Where The Sopranos was angry, Mad Men is curious. Even at his grief-wracked, whiskey-bloated nadir last season, being Don Draper wasn’t a life sentence because Don Draper doesn’t exist. He’s merely a particularly dapper suit that Dick Whitman is trying on for size. On Mad Men, identity is what’s fungible, not nature. Times change, and marriages, jobs, and fashion do too. In Weiner’s ’60s, you adapt or you fall behind. The haunting promo image for Season 5 features Don Draper staring wistfully at an undressed mannequin. His gaze isn’t that of an adman seeing a marketing opportunity; he’s seeing himself in all the plasticky possibilities.

Time is the real subject of Mad Men, but not the go-go retro indulgence that’s become its shorthand. Such thinking mistakes the sizzle for the steak, the beveled rocks glass for the hard truth it contains. (Mad Men, like most good shows, is often and easily misread. This week Vulture published a piece that lauded the show for its carnal indulgence of Don the lady-killer, as if extramarital fingerbanging could ever cover up the hundred tiny explosions of Don’s own internal minefield. People, it was a performance! Good ad men give clients what they want, then take the check and leave before the artifice becomes apparent.) The “major” events of the show’s era are processed idiosyncratically, often quietly: the Kennedy assassination ruining Roger’s daughter’s wedding, the Ali-Liston fight as uncomfortable evidence of Don listing toward the wrong side of the generation gap. Those who pine for the sharp clothes, the alpha alcoholism, are missing the point. We don’t watch Mad Men because we want to be them. We are them, cursed to live in interesting times we occasionally wish could get just a little duller, if only to give us a chance to catch our breath.

But if the universe doesn’t work that way, the contractual shenanigans behind the scenes at AMC gave us just such a breather, whether we wanted one or not. And, in a strange way, this year-plus siesta may end up being a blessing. The long absence casts Sunday night’s two-hour return in an even more flattering light — it’s almost embarrassing how much better it is than much of what we’ve been watching since October 2010; funnier, sharper, deeper, weirder. But the hiatus also allows us to appreciate the lived-in dreaminess that is the show’s métier. Time has passed for us, but it’s passed for the head cases at Sterling Cooper Draper Pryce as well. Dick Whitman — now so advanced beyond the bounds of his Don Draper character that it seems almost limiting to still be calling him that — bears the bemused look of someone perpetually wondering how, exactly, he wound up here, even though we’ve been privy to every agonizing decision along the way. The social upheaval out on the streets is mirrored closely by the emotional turmoil within the office. Yet it’s that office that keeps them relatively sane, the interpersonal connections deepened and enriched by the accumulating years. (There may have been no greater moment in Season 4 than when Peggy and Joan, adversaries turned respectful frenemies, shared a smoke and called bullshit on one other.) No show in television history has been so agile in navigating the push/pull dynamic of serialized storytelling: the warm comfort of familiarity spiked with the sense that anything could happen at any time. And most likely will.

The Golden Age of television will be replaced by something else — and, like Don Draper, we probably won’t even notice the shift. But it’s worth marking the time just passed, a riotously entertaining epoch that gave a creaky medium a fresh start. Fearless and still in its prime, Mad Man stands alone as the last of its pedigreed breed — and, as it pushes relentlessly forward into an unknown future, also the best. “I wanted a fresh start!” whined Betty, the eternal child, to her enabling new husband in “Tomorrowland,” the last original episode before this weekend. “There is no fresh start,” he replied. “Lives carry on.”