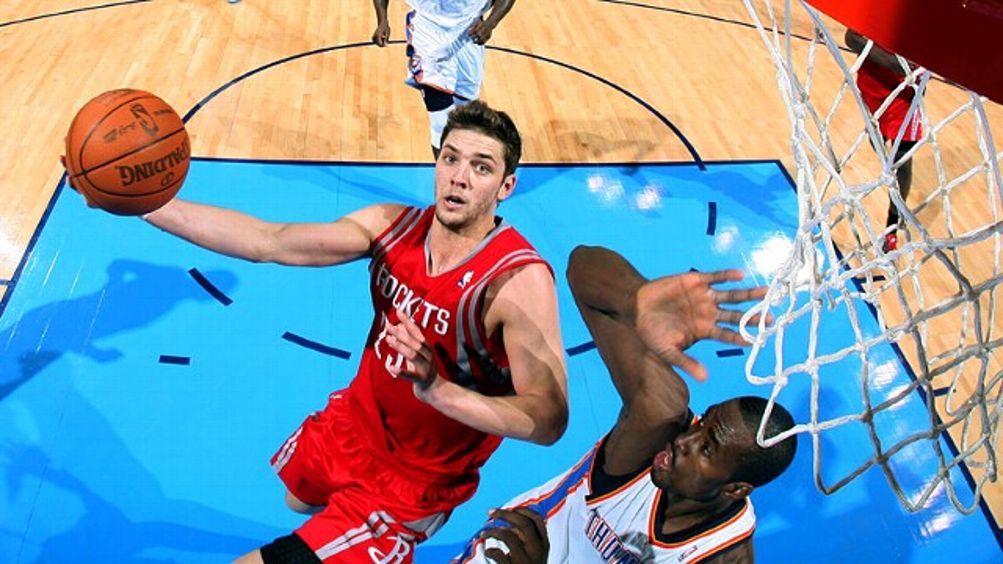 After a few weeks of stability, the Rookie Rankings have seen some upheaval; four of this week’s top 10 weren’t on last week’s list.

Irving has been an effective pick-and-roll scorer all season. One of his weaknesses, however, has been finding open teammates when he uses ball screens, especially finding them as the third option on pick-and-roll plays (options one and two are Irving uses the screen to create a shot and Irving uses the screen before dishing to the roll man). According to Synergy Sports, Irving’s teammates shoot 41.4 percent when spotting up during Irving’s pick-and-rolls. They post 1.101 points per possession (PPP) in these situations, which puts Irving in the 77th percentile among all NBA players in terms of kicking the ball out after a ball screen. Irving needs to play with more patience and learn to read when defenses collapse on him.

When Irving spots the defense overplaying him, he can recognize where the help is coming from and then find an open teammate, which will lead to open shots and greater offensive efficiency.

Aggression is the hallmark of Faried’s game. He uses it well and it’s a big reason why he’s ranked second this week. But sometimes, Faried’s intensity causes him to make mistakes on defense. Faried wants to stop the ball so badly that he tends to over-help. Sometimes he leaves his man when he doesn’t need to; sometimes he gets caught ball-watching and his mans slips into a pocket of open space. The result? Opponents shoot 56.1 percent on spot-up jumpers while posting 1.397 points per possession against Faried, placing him in the bottom 2 percent of NBA players when it comes to defending spot-up opportunities.

Faried also tends to overreact to the action in front of him. In pick-and-roll situations, he sometimes dives to defend a roll man even when that man isn’t open. This leaves his man open for an easy jump shot. When a teammate is getting posted up, he’ll range over and help too much. Against pin-down screens, he stays with the man curling around him too long and leaves his man open. All these mistakes can be seen in the video above. When Faried learns to identify where his teammates are weak, when they need help, and when they don’t, he’ll stick with his man more and stop giving up so many easy jumpers.

Thomas excels in transition. His PPP of 1.253 on the fast break places him in the 70th percentile of all NBA players. For one of the shortest guards in the league, it’s impressive that Thomas draws fouls so frequently in transition. According to Synergy Sports, Thomas gets to the free throw line on 16.8 percent of his fast-break possessions.

For an undersized player like Thomas, transition opportunities represent a rare chance to go to the basket without facing a thicket of big men who stand more than a foot taller than him. It’s a chance to score easy points, and there are no easier points than foul shots, generally speaking. Thomas gets to the free throw line in transition by slowing down, getting into the defender’s body, and drawing contact when he takes the ball up for a shot. On the break, defenders are usually running full speed to catch Thomas, so when he slows down it’s hard for them to get out of the way and avoid fouling.

Klay Thompson is a knock-down shooter, but to become an efficient NBA scorer, he needs to add something to his offensive game. In past weeks, we have looked at his struggles in isolation and in pick-and-roll situations. Another area where Thompson might have success is in transition, especially considering that the Warriors like to run. According to Synergy Sports, 15.4 percent of his possessions this year have come in transition. On those possessions, Thompson shoots 38.1 percent and posts 0.974 points per possession, placing him in the 22nd percentile of NBA players.

Thompson shoots a lot of 3s in transition. What’s the problem with that? He’s a fantastic 3-point shooter, right? Yes, but Thompson’s transition 3s often seem forced. It seems like Thompson is looking to spot up on the perimeter when his teammates assume he will be attacking the rim. So instead of passing to Thompson early in the break, when he can step into his shot and release it in rhythm, his teammates usually find Thompson too late and he takes bad shots. Once Thompson and his teammates figure out where and when to look for each other in transition, Thompson’s numbers should improve.

Leonard does a great job of gravitating to the rim and getting easy shots. He uses several different techniques to make sure that most of his shot attempts come in the middle of the paint. Using the new NBA.com stats tool, we can look at Leonard’s shot distribution. 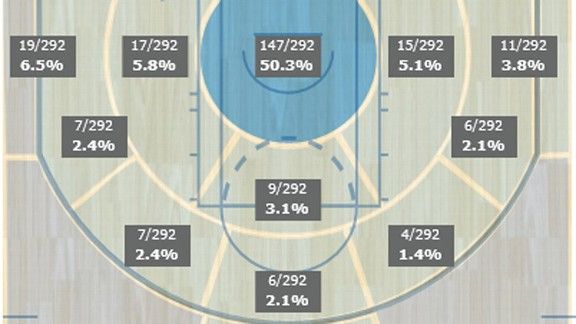 Leonard gets 50.3 percent of his shots right in the middle of the paint, at the rim. He shoots 62.6 percent on those shots. Now, look at this chart, which shows Leonard’s shooting percentages from different areas on the court: 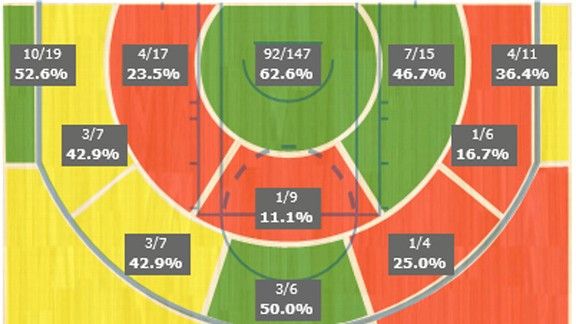 How does Leonard finish so successfully at the rim? One reason is that he is very good at cutting to the basket. Leonard finds wide-open opportunities by moving without the ball. He’s also just a savvy finisher in the paint who understands where the defense is and how to get his shot off.

Watch that first clip in the video. Leonard catches the ball and attacks the rim, but with the defense rotating toward him, he releases his shot at the weak side to use the hoop as a screener and to prevent his shot from being blocked. Rookies who just try to jump over or power through opposing players struggle to finish against bigger defenders. Leonard understands this and creates better opportunities for himself.

Williams is very good at using his athletic ability on offense. On defense, however, Williams struggles, especially when it comes to guarding against isolation situations. According to Synergy Sports, Williams allows 0.950 points per possession in isolation defense, placing him in the bottom 15 percent of all NBA players. This high PPP makes you suspect that Williams fouls too much, but that’s not the problem. He only commits fouls 5 percent of the time in isolation situations. Williams just has poor technique, and defenders blow by him too much.

Parsons doesn’t post the most impressive offensive efficiency numbers, but he really excels on putbacks and tip dunks, and Rockets fans have grown quite fond of the way Parsons defends big-time players. According to Synergy Sports, opponents have scored just 55 points on 91 isolation possessions against Parsons. That’s 0.604 points per possession, placing Parsons in the 84th percentile in terms of PPP allowed. During those isolation situations, opponents shoot 24 percent against Parsons. He has a nice combination of size and athletic ability, and he uses those tools on defense, something many rookies don’t like to do.

Thompson is still a raw athlete trying to learn on the job. This shows most in Thompson’s team defense. So far this season, he has really struggled with defensive schemes, especially in pick-and-roll situations. When Thompson hedges out against pick-and-rolls to help against the ball handler, opponents shoot 49 percent and post 1.057 points per possession. That puts Thompson in the bottom 10 percent of the league in PPP allowed. As Thompson gains experience, he should improve his understanding of when to stick with the ball handler and when to return to his man.

At this point in his career, Biyombo is a defensive specialist, and his offensive struggles are to be expected. In the post, Biyombo has scored just 39 points on 63 possessions this season, and his PPP of 0.619 in those situations places him in the bottom 17 percent of all NBA players, with a 31.8 field goal percentage. When we examine Biyombo’s splits, however, we can see that he has some post game. On the left block, he posts 0.792 points per possession on 40 percent shooting. Why is he better on the left side? Biyombo loves to catch the ball there, turn to the baseline, and hit a jump shot or hook. His long arms and high release point make this a difficult move to defend. In fact, to break it down one step further, when Biyombo turns over his right shoulder (toward the baseline) on the left block, he posts a PPP of 1.000 and shoots 55.6 percent. On that move, he scores in the 81st percentile of NBA players in the post.

Burks is most dangerous in transition, where he gets 23.8 percent of his possessions, according to Synergy Sports. On those opportunities, Burks gets to the free throw line 21.4 percent of the time. He uses his speed and the fact that defenses are always trying to catch up to him to his advantage. Burks understands that defenses struggle to catch him and that they are coming so fast that they can’t adjust when he makes his move. As Burks gets closer to the rim, he slows down, creates contact with a defender, and often draws a foul.