Ephraim Salaam on Pain Pills in the NFL

Lockout Hell, Raider Nation, and the Triumphant Return of the D’Antoni ‘Stache 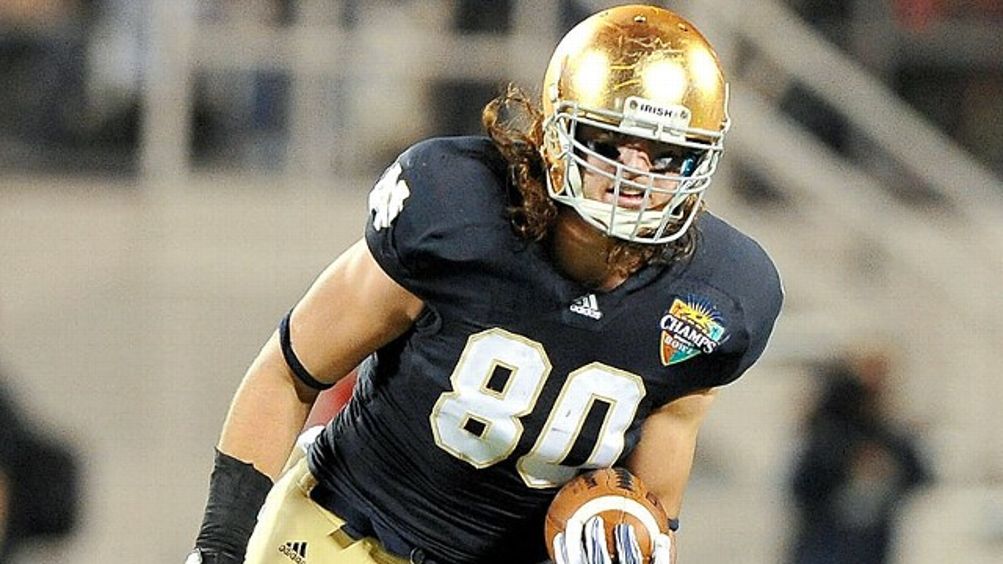 Hunk of the Week (Last-Chance Edition)

Got any Irish in ya? If you want some, it’s time to make your move. What I’m bringing today is the tightest in a long line of Notre Dame tight ends. Tyler holds single-season school records for receptions and receiving yards at his position, and if there were a record for making defensive backs look like they belong on the scout team, he’d have that one, too. Tyler’s season has gotten much more serious than anyone thought it would, and pretty soon he’s going to be all football all the time. The window is closing on getting this star pass-catcher out to a horror movie and pretending you’re scared, because pretty soon Tyler will only be watching film of enemy defenses. Pretty soon the only scared folks getting close to Tyler will be nervous safeties.

Tyler’s a great third-down option, but he’s your first choice, so you better get him out to Bonefish before he’s anchored to that mess hall and the only passes being made in his direction come from the right arm of Everett Golson. You’ve got style, sweetie, and no one’s ever disputed that. (You won Most Fashionable back in high school and this past summer you did an internship at Vogue!) But before long the only style Tyler’s going to be worried about are those style points the pollsters love. New shoes? A dress your mother wouldn’t approve of? Do whatever it takes. Everyone thinks you’re an angel, but it’s time for a halo violation. You’re smitten and none of your ex-boyfriends can do a thing about it — Mike, Sam, Will — you’ve forgotten all about them. This is no time for a pre-vent defense. It’s time to play offense and maybe even commit an illegal use of hands.

Oklahoma at West Virginia — Before the season, this game stood out as one of the points on the schedule when the rubber might meet the road.1 I’m not going to pile on the Mountaineers defense. We all know the trouble they’re in. But whatever Washington Generals–style humiliation the Sooners put on West Virginia, Oklahoma is also to blame for tarnishing this once great-looking tilt. Something is missing on that team, and it isn’t coaching. There’s not much leadership on the field, not much twinkle-in-the-eye. Sooners quarterback Landry Jones has all the measurables and statistics and dominates lesser opponents, but he’s lacking something — that moxie or will or whatever — when situations get hot. If Jones possessed whatever that “it” is, Oklahoma probably wouldn’t have suffered two home losses to good-but-not-overwhelming teams. It’s a tad unfair to talk this way about a player who has thrown a million touchdowns, but if you’re the starting quarterback at Oklahoma, people expect you to lead. You don’t have to grab your guys by the face masks and scream, but you have to find some way to inspire.

Ohio State at Wisconsin — I expected there to be a transition year before Ohio State regained its natural position atop the Big Ten. Well, they’re a little ahead of schedule and the rest of the conference has looked sluggish. Or, just maybe, the Buckeyes’ final two opponents — Wisconsin and Michigan — stand up at season’s end and throw a little spice into the bland, brownish stew that is Big Ten football. If Wisconsin’s latest ACC quarterback poach (Danny O’Brien) had been anything like Russell Wilson, and if those former Buckeyes players would’ve stayed away from tattoo parlors, this game could’ve decided a lot.

We have two great offensive players to enjoy, Braxton Miller for Ohio State and Montee Ball for Wisconsin. Ball is trying to break the all-time record for touchdowns. He’s going to finish his career with more than 80 scores. Urban Meyer has shown that his system is deadly when he has a quarterback, and there’s no reason to believe he isn’t going to turn Miller into Tebow North by next season.

Wisconsin has the Big Ten title game to look forward to, but this battle against the Buckeyes has more national significance.2 Ohio State and Penn State, the two other good teams in the Badgers’ division, are of course ineligible, which really unplugs the guitar. No one outside of the equipment staff of the winning team, which has to make space for the trophy in the athletic department lobby, will care who wins the Big Ten this year. What is interesting is getting an early indication of whether Wisconsin is going to remain a threat to Ohio State in seasons to come. If they can’t beat Meyer this year, well, forget it.

USC at UCLA — The chatter all season has been that Oregon will need to beat USC twice to get to the national championship game, but that seems like a toss-up. UCLA is ranked higher and has the Trojans up in Pasadena. Either way, the Ducks will have to beat a ranked opponent for the conference championship. Bruins fans have to be pleased with what Jim Mora has done in his first year. They’ve got a quarterback. They’ve gotten tougher. It’s unavoidable — if USC is your in-town rival, you’re going to measure yourself against them. The Bruins are not going to recruit like USC, but they can recruit for their system and team need. No five-stars, but they’ve already got some good young offensive linemen — the most important part of a football team — and a bunch more big eaters are arriving with next season’s class. They’ve got a better record than the Trojans, during a season that began with USC ranked no. 1 in some preseason polls. So far, so good, Coach Mora.

Note: I’m hearing that UCLA officials have just informed USC that their mascot — you know, that guy who looks like he’s on loan from Caesars Palace — won’t be permitted to stab the turf with his sword at the Rose Bowl this weekend. Now it’s time to put down some billboards on Jefferson Boulevard.

For USC, the problem has been defense,3 and the Trojans will probably need to outscore UCLA to beat them. If you’ve got to play that way, there are worse guys to have doing your scoring than quarterback Matt Barkley, his NFL-ready receivers (Marqise Lee and Robert Woods), his scary running backs (Silas Redd and Curtis McNeal), and his tight end, who arrived on campus as the no. 1 recruit at his position a couple years ago (Xavier Grimble). The only way for Barkley’s senior-season return to be dubbed anything other than a fiasco is for USC to win the Pac-12, and this weekend that goal will be at stake.

The Book: Twelve Mighty Orphans
The Author: Jim Dent
The Sport: Old-time football
The Dope: The last recommendation took us to the 1960s, and now we track back all the way to the ’30s. High school ball. Texas. The story starts with bootlegging and murder, and with the Brown brothers, Jeff and Hardy, being shipped to the Masonic Home in Fort Worth. They’ve never seen football played, but that’s about to change. Coach Rusty Russell is brought on at the home to build a program from scratch. Russell is a World War I veteran with a damaged eye and a soft spot for the less fortunate. He wears a pressed suit and fedora every day, even while coaching, and has up his sleeve a newfangled offense (later termed “the spread”) that he hopes will neutralize the size advantage of his orphans’ larger opponents. Each game the Mighty Mites play — that’s the nickname thrust upon them — they’re outweighed by 25 to 40 pounds per man, and Russell is the first coach to begin sending five quick players at a time into pass patterns, turning the heft of the opponent from an asset into a liability.

The Mites are an irresistible underdog. They don’t have proper pads or uniforms. In early practices they use an empty baking powder can instead of a football. Athletes or no, none of the orphans wears shoes from April 1 to October 1. Instead of in a team bus, they ride to away games in an old Dodge farm truck. In the first season, Coach Russell — reminds you of modern-day college football — accepts $250 to watch his team get slaughtered 97-13 by an established powerhouse program. With the payout, Russell buys letter jackets for his 12 varsity players, hoping to inspire in the younger boys a desire to one day be football players. Along with jackets, the Mites now have footballs and gas money for the Dodge. Pads and uniforms and helmets worth wearing can wait.

Rusty Russell knows his offense is going to give the orphans a fighting chance, but he also knows the boys are going to win because of toughness. The boys have been in so many fights in the orphanage that the football field is almost docile to them. The varsity team double as “milk slimes,” rising at four each morning and trudging out to the dairy. These kids have endured the deaths of their parents, and are united against an outside world that deems them lesser.

There’s a lot of good Texas setting in this book — physical setting and details of the sport of football in its formative years. Ties in high school football games are broken by the number of times a team has penetrated the opponent’s 20-yard line. Extra-point tries, it seems, are successful about half the time. SMU has a football stadium but no library. And the scope is occasionally broadened to include other sporting underdogs of the time, including Seabiscuit and James “Cinderella Man” Braddock.

There are villains. On the personal level, there’s Frank Wynn, a sadistic dean at the orphanage who regularly uses a garden hose to beat the boys within inches of their lives. On the political level, there are the Austin-based powers that be, who want the Mites kicked out of big-time high school football because they keep beating bigger and richer schools.

The book tracks the Mighty Mites as Russell tries and tries to win a state title — with his zero assistant coaches, with his 12-man roster, with his long road trips in the old Dodge. It’s an inspiring story that — as often happens in sports — would strain believability if it weren’t true.