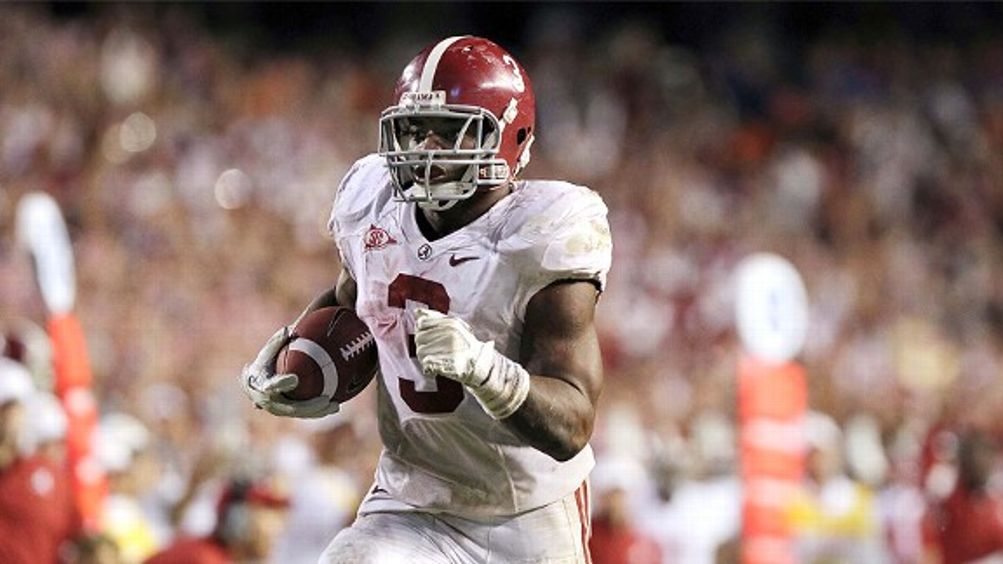 This season in college football, only two teams have consistently played at a championship-quality level without a great, or at best very good, quarterback: Alabama and LSU. These two teams meet Monday night in the BCS title game. For both, middling quarterback play is a function of both necessity and design. They didn’t have an Andrew Luck to build around, but they both have assembled rosters filled with future NFL draft picks, particularly on defense.

LSU has had the more dramatic ride at quarterback, oscillating (as a result of both off-field issues and on-field play) between Jarrett Lee and Jordan Jefferson. But even with those troubles, LSU’s power run game and dynamic defense make them my pick to win the BCS title game.

That said, we should never count out Nick Saban. Alabama’s defense is arguably even better than LSU’s based on statistics (though I favor LSU owing to stronger competition and general fearsomeness). Alabama also boasts perhaps the best player on either team: running back and Heisman finalist Trent Richardson. Perhaps more than any other player in the country, Richardson has the ability to personally shred defenses, even those geared to stop him.

But can Alabama get Richardson loose? In the first matchup (or hadn’t you heard that this game was a rematch?), Richardson led the Crimson Tide in rushing and receiving but never really got free. Because we know what we will get from Richardson — primarily, if you’re an LSU defender, a face full of the kneepad-covered pistons he calls legs — Alabama’s success on offense Monday night will depend on offensive coordinator Jim McElwain and tight end Brad Smelley.

McElwain, who will become head coach at Colorado State next season, joined Alabama in 2008. The previous year, the Tide went a disappointing 7-6 and sent Saban looking for a new offensive coordinator. Saban picked McElwain for his keep-it-simple philosophy. “The other thing that I liked, you have several different ways you can throw the ball,” Saban told the Birmingham News. “I thought, with our particular quarterback [at the time, John Parker Wilson], there had to be some just reaction throws. It had to be more Dick and Jane rather than War and Peace. Simple. I felt like, even though our guy is bright and can handle all that, it just was making his position harder to play than it needed to be sometimes. We needed to simplify so that he could make better decisions.”

To most outsiders, the Saban-McElwain tandem looks like a happy marriage. Alabama won a national championship in 2009 and now they’ve got another in their sights. But the notoriously tough Alabama fans have grown somewhat tired of the “Dick and Jane” approach on offense, particularly after losing to LSU in the infamous 9-6 game earlier this season. Before the Tide and McElwain part ways, however, they’ve got one huge game to win. Let’s look at McElwain’s coaching history and tendencies to see how Alabama might try to score more than 6 points this time around.

McElwain’s mentor was the fiery and quixotic John L. Smith, under whom McElwain coached at Louisville and Michigan State. Smith was an early adopter of the spread offense, but more specifically he was an aficionado of the “one-back offense,” whose roots go back to Jack Elway (John’s father, himself a coach) and Dennis Erickson. McElwain also coached with another one-back offense guru, current Detroit Lions offensive coordinator Scott Linehan.

Under Saban’s direction, McElwain has based his one-back attack on a version of power football that uses multiple tight ends. With these versatile blockers and receivers, McElwain can confuse and distort defenses while keeping the game simple for A.J. McCarron and the rest of the offense, just as Saban likes.

Players like Smelley are the key. This ex-quarterback turned tight end is the fulcrum of Alabama’s offense. Smelley’s numbers won’t jump off the stat sheet at you, but if you watch the Tide on offense, you’ll see him everywhere on the field. Smelley provides the subtle wrinkles that open up the field for Richardson; his movement creates the slight changes in assignment that can take a simple play and turn it into a game-breaker.

Alabama’s base run play is the inside zone. The Crimson Tide run this play over and over again. In fact, the inside zone — also known as the “slant” or “belly” play, or the “tight zone” — is essentially the foundation of the modern running game at every level, from the NFL to college. Its lineage dates back decades, but only in the last 20 years or so has the zone running game supplanted man blocking schemes. Of course, this doesn’t mean that no one uses man blocking schemes anymore, but it’s beyond argument that most every team — pro-style, spread, I-back, or one-back — begins with the zone, and more precisely the inside zone.

Coaches spend hours studying the finer points of zone runs, but the basics of the scheme are simple enough to grasp in 15 minutes. The theory behind zone running is that given the multitude of shifts and maneuvers a defense can present — and the many formations offenses use — clear rules are necessary to run the ball effectively. The zone rules allow offensive linemen to work together, double-teaming the defensive linemen before sliding off to block the linebackers. If the blocking is effective, the running back should be free long enough to find the open crease. The running back reads the defensive linemen and either takes the ball outside, cuts up the middle, or cuts back depending on the defense’s reaction.

Those are the basic concepts. Take them and add Smelley. In Alabama’s offense, most players have very defined roles. This allows them to develop and maximize the four- and five-star talent Saban brings in every year. The runners run, the line blocks, and the receivers receive. Simple like Dick and Jane. But that second tight end, well, he might do anything, and that makes the offense dynamic. For example, let’s look at a basic two–tight end set that Alabama used against LSU earlier this year, and how Smelley can enhance a simple inside zone. 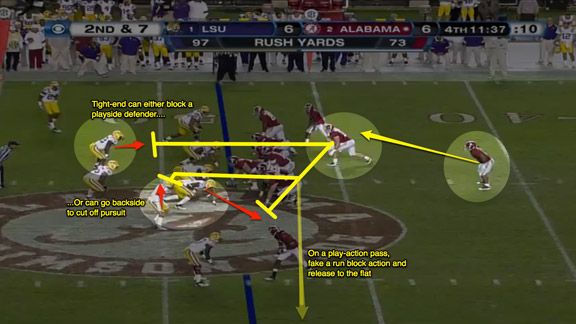 From this set, Alabama likes to run to the side of their bigger and more traditional tight end, Michael Williams. But the key to effective offense is having concepts enough for your players to execute but varied enough to keep your opponent guessing. Smelley, the backside tight end lined up off the ball, gives them that flexibility. On a run play to the right, he can cut off the backside defensive end or pull toward the play side to “insert” into the blocking scheme and block one of LSU’s linebackers. Or, he may take a few steps inside and then cut off the backside linebacker, hopefully drawing the linebacker away and opening a cutback lane for Richardson.

Alabama can pull Smelley all the way across the field and insert him on the playside linebacker, thus adding extra blockers to the playside — this is the vaunted “Power O” scheme from a one-back set. Finally, McElwain and Saban can always have McCarron fake the handoff to Richardson and hit Smelley in the flat or even up the field.

The offense adds more wrinkles when Smelley lines up as a receiver or in a spread-type set. From there, he transforms a pass-first formation into one capable of delivering Richardson’s power runs. One set along these lines that McElwain likes to call is to put a “bunch” group of three receivers to one side, typically with Smelley as an inside receiver. From this spot, he has the option to release on a pass route, but more importantly he can facilitate the run game by blocking for Richardson. LSU may have otherworldly speed on defense, but Alabama is as physical as any team in the country, and of course they have Trent Richardson — all they need is a little open space. 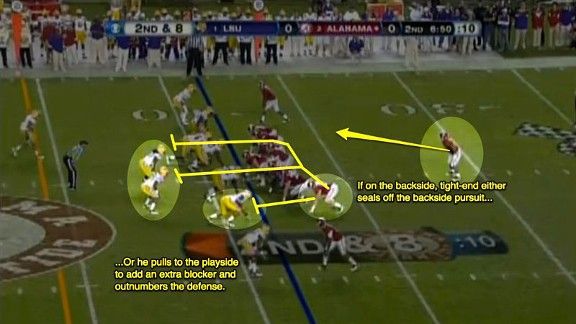 If the play calls for Richardson to run to the side of the bunch, Smelley can be an extra blocker to that side, typically on a linebacker. But Smelley can also attack the backside, sealing off the defensive end or linebacker to provide a big cutback lane for Richardson. Remember, although Smelley is a solid blocker, it’s his mixture of athleticism and blocking that makes him effective. Because he has good size and good feet, Smelley’s job isn’t just to overpower the guy across from him, as it would be for an offensive lineman or a bigger, slower tight end. Instead, as the diagrams show, almost all of his blocks require, more than anything else, leverage. He pulls and kicks out a linebacker; he scoops and cuts down a backside linebacker, or he seals off someone pursuing from the backside, often with the element of surprise. Indeed, when coming from unexpected spots, Smelley doesn’t need to make a devastating block to be effective; he just needs to get in the way to open up a crease for Richardson. Finally, as in the traditional two–tight end set shown above, he can pretend to block the backside and then slip into the flat for a pass. This is not complicated stuff, and it doesn’t have to be because it fits together well.

The great Homer Smith, former Alabama and UCLA offensive coordinator (and maybe the only offensive coordinator to hold multiple Ivy League graduate degrees), once said that Nick Saban’s assistants are great because he coaches his coaches. Against LSU’s defense, McElwain will have to be great. But the right game plan against LSU, if you’re Alabama, is to stay simple and stick to the plan — give it to Trent. From there, all you need is enough offensive flexibility from Smelley to make it work. If Alabama wins, it will be by playing their game, their way. You don’t have to be Tolstoy to figure that out.

Previously by Chris Brown:
Understanding the Houston Texans’ Running Game
Draw It Up: Oklahoma State and the Stick Concept
Draw It Up: Army-Navy and the Flexbone Offense
The Case for Baylor’s Robert Griffin III
Draw It Up: LaMichael James’ 58-Yard Touchdown