Catching Up With the Cup

How Soccer Explains the Sports Page 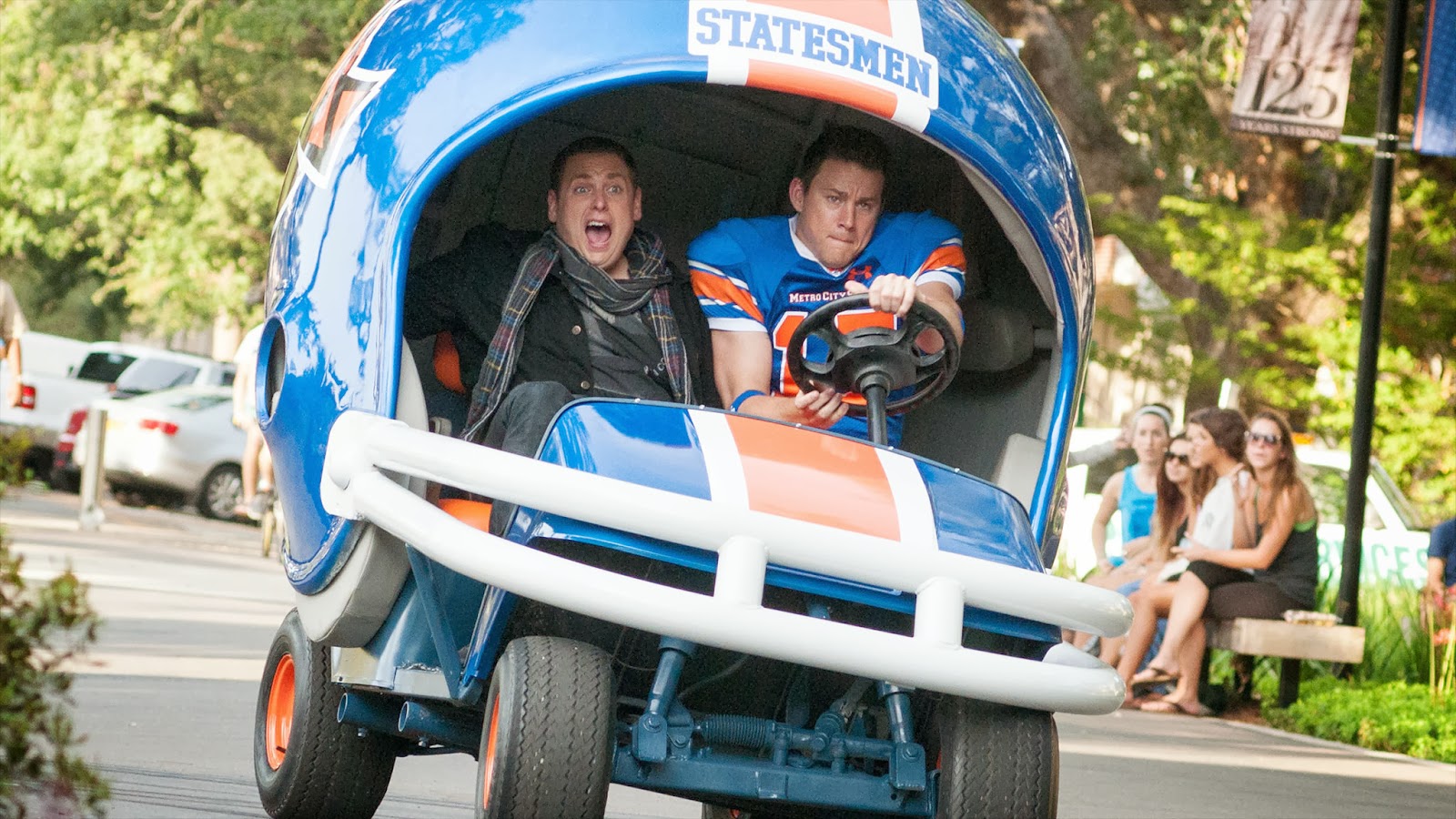 Not far into 22 Jump Street — like, by the second sequence — it’s clear the movie has a case of the sequels. Deputy Chief Hardy (Nick Offerman) sits across from idiot narcs Schmidt (Jonah Hill) and Jenko (Channing Tatum), and with maximal exasperation explains their ridiculous new case in terms that explicitly mirror the ridiculous demand for a movie sequel. The whole movie is just like that — giddy with self-loathing — and goes exactly where you’d expect (college). The hub of the undercover operation has been moved across the street from the previous address — a Korean church — and Schmidt and Jenko return to the had-it-to-here command of Captain Dickson (Ice Cube).

This being an acutely self-conscious comedy, one of the guys gets a load of Dickson’s blue-lit square of an office and exclaims that it looks like a giant ice cube. Really, though, it looks like somewhere Ice Cube would film one of his atrocious Coors Light ads. There is amusing expository talk of how no expense has been spared for this second operation and how the spoils of prior success abound. And it’s a little bit funny, but you’re nervous because it already feels as if the only way the movie’s going to survive itself is in quotation marks.

Eventually, Dickson explains that there has been a new death (a sweet, young girl) by a new drug (WHYPHY) at a new school (MC State a.k.a. “McState”). But before things get under way, Schmidt goes on a wink-wink tangent about how the good they’re doing is even better, as white protagonists, because the victim was black, introducing a new layer of self-awareness. On campus, that layer thickens when he and Jenko, playing twins (in the Schwarzenegger-DeVito mold), discover that they live across the hall from actual twins — half-black, half-Chinese, all stoner — called the Yangs, played by the lackadaisical comedians Keith and Kenny Lucas.

The movie’s preoccupation with twoness proliferates. The search for the drug dealer means Jenko gets to fall in semi-platonic love with a quarterback and fellow himbo named Zook (Wyatt Russell), while Schmidt falls for the dead girl’s stunning friend Maya (Amber Stevens). In the spirit of all things sequel: Wyatt is the son of Kurt Russell and Goldie Hawn; Stevens, the daughter of the heavenly voiced radio host Shadoe Stevens.

The movie’s at its best when it stops making fun of itself and, like the first film, gets at the peculiar real-world rituals and humiliations of the plot’s host setting. Now it’s Schmidt who’s jealous of Jenko’s thing with Zook (in high school, it was Jenko who envied Schmidt’s popularity). It makes you wonder whether he’s seen Maya. Of course, she wants things to proceed casually, which sends Hill home the morning after their first time in a well-done walk of shame: He’s the only male in a courtyard gradually filled with chagrined-looking, shoe-toting women. The school library’s deserted stacks house an anti-homophobic action sequence. And Maya, for instance, now lives with the dead girl’s shaming former roommate Mercedes (Jillian Bell), who goes on about what a thrill it is not-sleeping across from wild, never-ending sex. We’ve all been Mercedes.

Generally, the movie’s self-consciousness becomes mutual. You laugh because you laughed two years ago, and two years ago you laughed, in part, because it was a shock to find yourself in the hands of this kind of gonzo physical and verbal wit. 21 Jump Street changed the properties of its source material: An earnestly message-mongering TV cop drama had been carnivalized, like The Sound of Music becoming Sister Act 2.

The writers (Michael Bacall, Oren Uziel, and Rodney Rothman) and directors (a pre–Lego Movie Phil Lord and Christopher Miller) played up the show’s kitsch and tweaked both its moral decency and eyebrow-raising premise — Johnny Depp, Holly Robinson, Peter DeLuise, and Dustin Nguyen looked a decade older than the students they were hidden among. Not once did anyone turn to DeLuise and say, “Jesus. Shouldn’t you be working at this school?” But the show made the narcs sexy and cool. It’s the kids who were addled and troubled and weird. The movie reversed the dynamic and vacuumed out any preexisting social value and got it on the bromance bandwagon. But even the physical difference between schlubby Jonah Hill and hunk Channing Tatum was ripe for farce.

Comedywise, 21 Jump Street was on-trend. It wanted to mock the show, but, really, it wanted to extract the gay undercurrents in the buddy movie, and in 2012 the ground for that was fertile. Edgar Wright and Simon Pegg had a good time with their 2007 action satire, Hot Fuzz. It was a seamless conflation of intelligent mockery and admiring embrace. The first Jump Street was perfectly calibrated in the opposite direction. It was canny about just how stupid to be. You laughed because it was aiming for lunacy and went well beyond it. 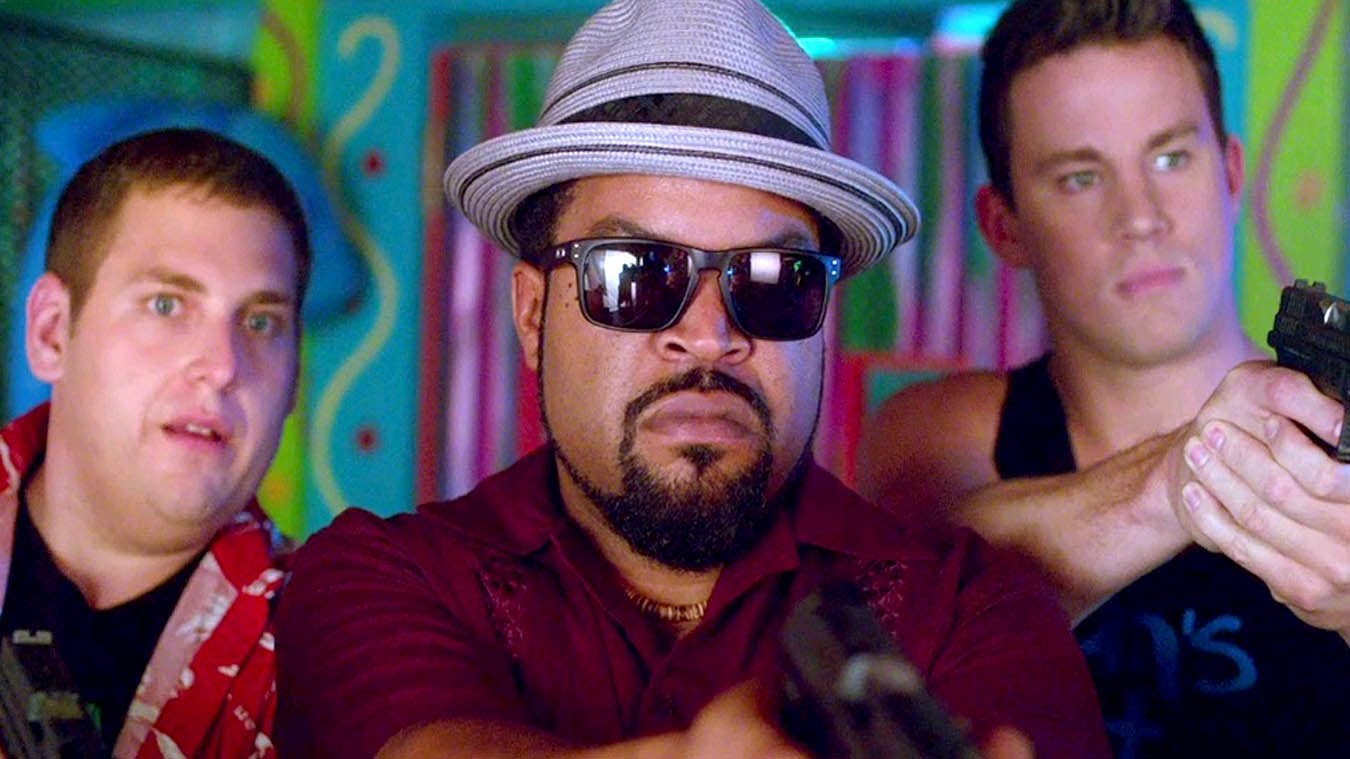 The drug Schmidt and Jenko were trying to stop was called HFS — for Holy Fucking Shit — a poetically literal name whose visual and verbal explanation compounded the hilarity. At some point the narcs wind up on HFS. They experience one of the funniest highs I’ve ever seen. It’s the Rapture for anyone dreaming for, say, Darren Aronofsky to do Cheech and Chong. In the last year I’ve seen passengers watching 21 Jump Street on planes — or, rather, I’ve heard them — and have leaned over and gotten hooked all over again, this time with no sound.

As pleasing as all of this more-more-more might be, it’s also less: less wit, less imagination, much less time with Caroline Aaron as Schmidt’s unconditionally overbearing mom — and lesser surprises, although Jillian Bell really is a comic discovery, threatening to hijack the movie with her deadpan vulgar schoolmarm act. All of Aaron’s scenes appear to have gone to Ice Cube, who does nothing but bark his character’s lines, just inside a bigger doghouse, one that pretty much resembles the premise of Ride Along.

But Hill and Tatum are as committed to the nonsense as they previously were. Hill’s simmering demoralization and Tatum’s elastic stupidity remain perfectly matched. After the revelation of the tangential plot twist, there’s a moment in which Tatum runs all over headquarters, laughing, while Hill remains seated, being laughed at. It’s an over-the-top expression of their humiliation-humiliated dynamic that almost trumps the outstanding production design and editing used for their split-screen trip on WHYPHY. Still, they’ve outgrown these parts. Even in two years, their careers have changed, as have Lord’s and Miller’s. Mercedes gets a lot of laughs when she lays into Schmidt for looking like such a 30-year-old. In that sense, the sequel surpasses the show: They look too old to be playing guys who look too old for college.

22 Jump Street has the same writers and directors as the first film. But it’s not smart this time as much as it is clever, and that cleverness tips into spottiness and cynical self-congratulation: We have no more use for this series, so why not just blow it up! High school is a much more comedically fertile universe for adult relocation. There are more social norms to transgress, more minds to blow. 22 feels as jaded as some college kids. Lord and Miller walk a fine line between shrewdness and smugness. Their smash Lego Movie from the spring erred on the side of the latter. It felt like an agnostic using corporate products to pay lip service to the joys of the individual imagination. These two are better at a kind of zippy contempt.

The last summer comedy sequel I can remember mocking itself with comparable brio was Austin Powers: The Spy Who Shagged Me, which is 15 years old. But Lord and Miller have a different ambition. They want to take out the superfluousness of the entire Hollywood sequel industry. They’re not biting the hand that feeds them. They’re laughing at the factory that makes the hands. 22 ends with a hint of 23 Jump Street and then doesn’t stop. As the hypothetical ideas keep coming, a kind of satirical morbidity sets in. You’re not watching elevator pitches. You’re watching the series finale of Six Feet Under: a sequel death pageant. It’s brilliant on the one hand and tiresome on the other. In order to commit this act of movie-biz terrorism, Lord and Miller pretty much detonate their own film as collateral damage. They spent blockbuster money to stage a sketch-comedy prank.